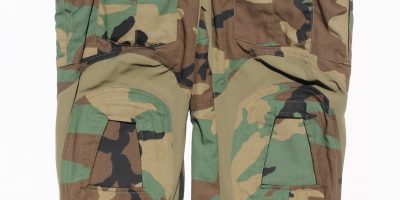 Transparency first; this pouch that was manufactured by British Tactical was sent to me for free by Flimmuur Tactical while I was deployed.  I have no other relationship with BT, no money was exchanged, FT just sent me the pouch and said try it out and let the good folks know what you think.  Hence, this is what I’m doing right now.

To cover off something else before talking about the product, I should mention that the image below shows the correct way to mount the webbing pull tab on the bungee cord and that is the best way to go for the user who wants that bungee to be there but is also actually likely to use their pistol in a combat situation.  The way you see I had the tab attached in the image at the top of this article was a minor bodge on my part and is not correct, however as you will also note the webbing wraps around the base plate of a 9mm Glock magazine pretty much perfectly for maximum possible security.  Those serving in the UK armed forces who have deployed operationally will know how severe the fines are if you lose even a single round of ammunition but your sidearm must be on your person at all times even when (for example) working on a flight line, climbing on and off things, crawling under things etc.  The difference in retention is slight with my setup versus the proper one, but when so much is on the line any minor increase in that retention is one I will gladly take.

To explain the delineation between design and manufacture that has gone in to this product, Flimmuur Tactical is the original designer with British Tactical contributing certain elements to the designs then building them from raw materials in to a finished item.  I’ve known the man behind FT for a number of years now, he started off making custom kit of all kinds in the single digit quantities and doing general kit mods to a really high standard, but obviously if one wishes to move in to the realm of larger scale production that requires a company with a decent sized facility, hence the partnership we see here with BT and bringing the Horizon Laminate range to market. 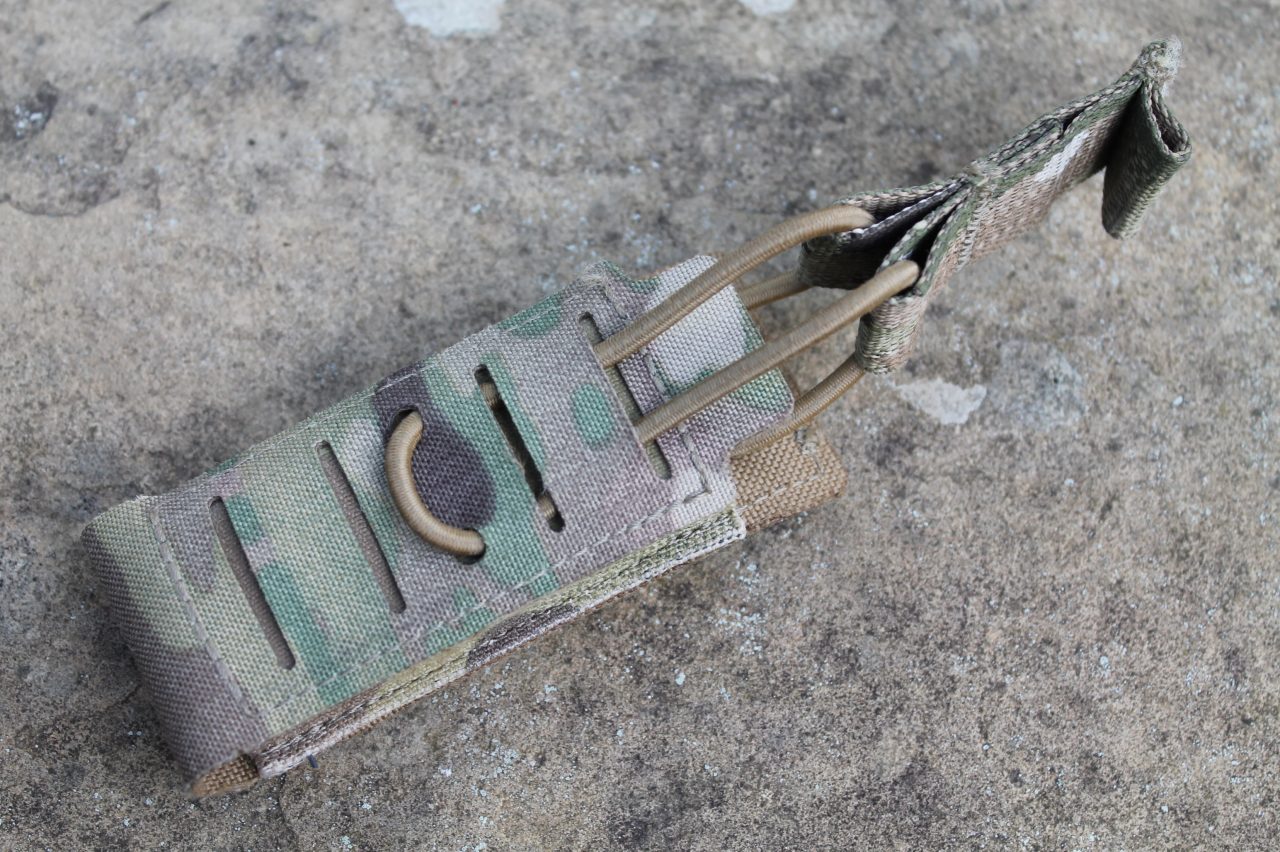 Getting one of these pouches to review has actually been a really enjoyable change for me as there is an incredibly limited number of manufacturers in the UK who are putting out high quality military kit using properly modern materials and design methods.  Granted quality is somewhat subjective to a lot of people, but off the top of my head I’d say you could count those aforementioned manufacturers on one hand, certainly when we’re talking about kit I would recommend to any serving individual.

To really break down the basic premise with the pistol pouch I have here, we see a design that sits in between a pure elastic pouch (like the Blue Force Gear TenSpeed) and your average, bog standard issue all-cordura pistol pouch that can be seen absolutely everywhere.  Elastic is used as one part of the retention for a stowed magazine but the pouch retains its’ form more like a cordura pouch and overall durability is greatly increased over just elastic.  There is a short break-in period here that you should take note of, but it doesn’t take long for the elastic component to open up just enough such that re-indexing a magazine is easy and intuitive.  I think ‘best of both worlds’ is often a cliche phrase but in this instance I don’t think it’s too far off the reality at all.

The front of the pouch has laser cut slots of PALS width so extra kit could be mounted up front if so desired, even when the bungee is mounted.  There’s also a short tongue right at the top edge which doesn’t look like much but if you happen to squash the pouch shut while it’s empty you will be very glad that tongue is there when time comes to stow a mag. 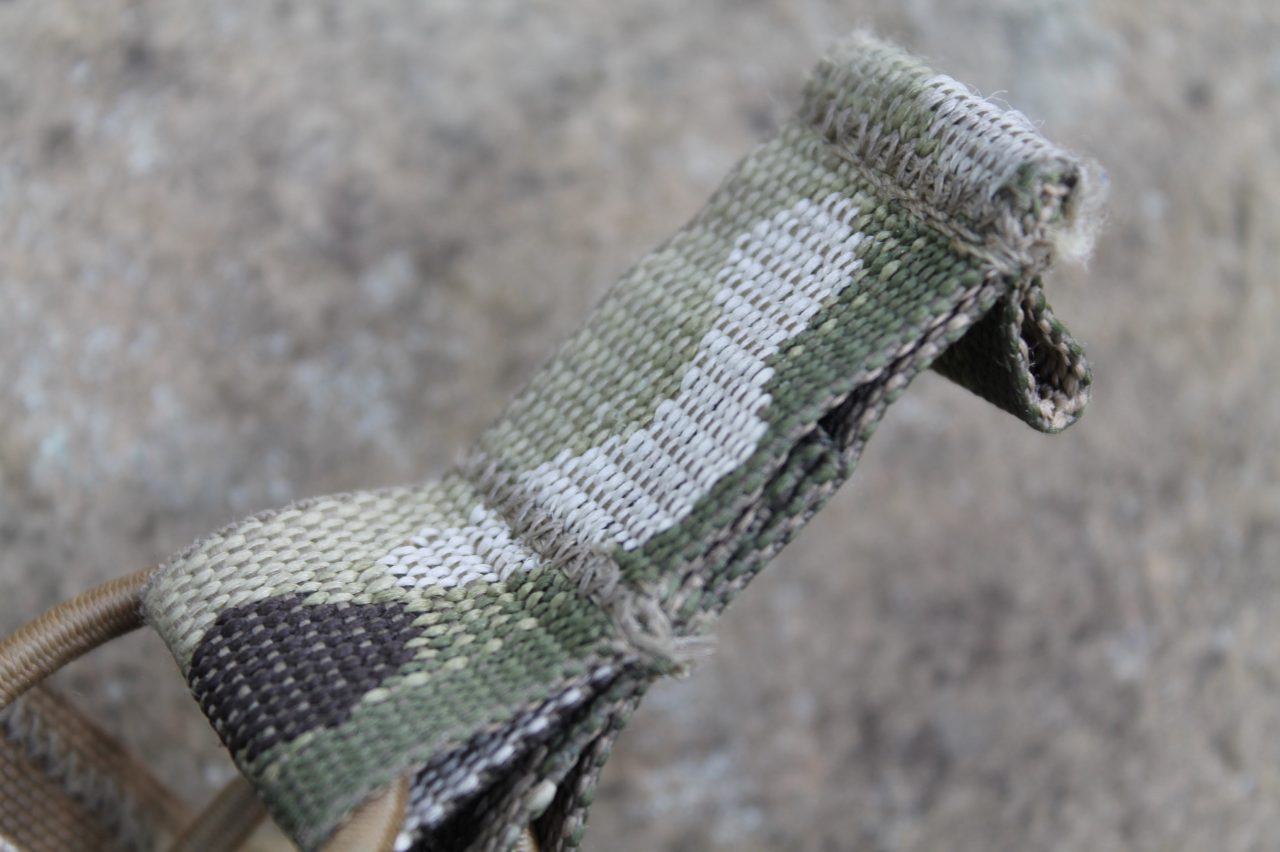 The depicted bungee cord and webbing tab is included with every HL 9mm Mag Pouch but it is purely optional and does not have to be fitted if not desired.  The elastic alone provides a pretty good level of retention and I think for any recreational user it would be more than enough, though the guaranteed security of the shingle style bungee over the top is what most military folks will probably want. The pull tab is made of woven multicam webbing that is tough and won’t fade to white with exposure to sun and rain, with the fold over at the top providing more than enough gripping surface.  More grip than a lot of designs out there in fact, given that many pouches only offer a straight tab without the extra material sticking out from the top to really minimise any potential for slipping in wet or dirty conditions or when thick gloves are worn.

Magazines of various widths and lengths/capacities can of course be accommodated, first by the elastic nature of the main body and then also by the wide range of adjustment and fitting options for the bungee.  Though I’ve shown the cord looped through the design-intended small circular cuts up front it can be routed through any slot on the front of the pouch, or more suitably the excess going through the knot on the rear can just be changed and any excess snipped if needs be. 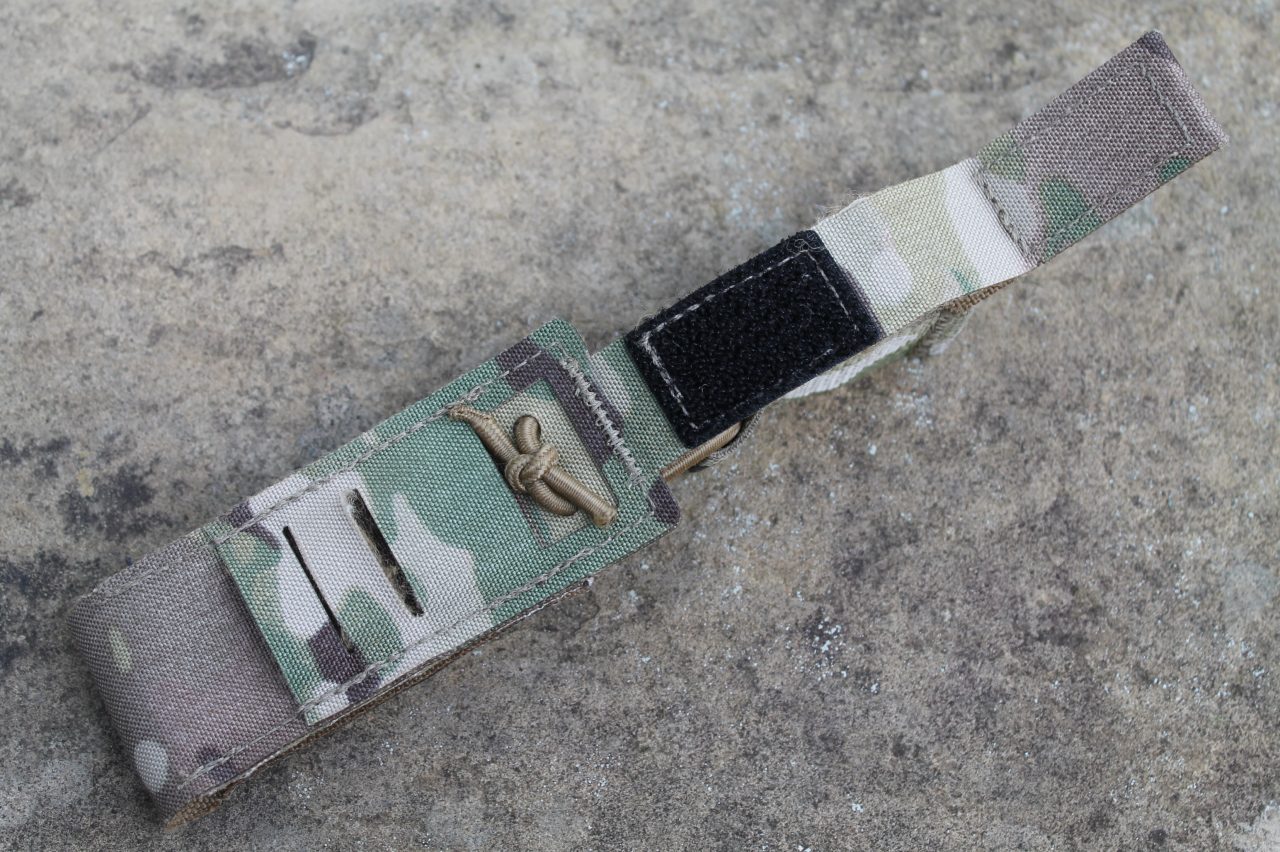 When looking at the rear face of the pouch a lot of my favourite design elements become visible.  Rather than just stitching a strip of webbing or cordura to the top edge of the pouch for the attachment strap (as most manufacturers do) the entire PALS interface is comprised of a single pieces of the laminate, though a bar tack has been put in at the base of the strap just for that belt-and-braces effect.  This is an entirely separate extra piece which has been sewn to the back of the U shape laminate that encapsulates the elastic and itself forms the base of the pouch.  There are also multiple slots through which the strap can be threaded so that belts of differing widths can be accomodated.  I spent my time with this pouch mounted to a FirstSpear AGB which is 1.75″ wide and entirely plain i.e. does not feature PALS, but the HL 9mm stayed put with no concerns at all.

One really quite unique element is the usage of a material that is both hook and loop at the same time – if you’ve ever been issued a CAT you will be familiar with this stuff.  The velcro piece will sit against the interior face of your belt when mounted and will lock in to place regardless of whether your particular choice of belt uses either hook or loop on its’ inner surface, bearing in mind that velcro type does vary between different belt makers but you won’t have to worry about it either way thanks to this very smart design choice. 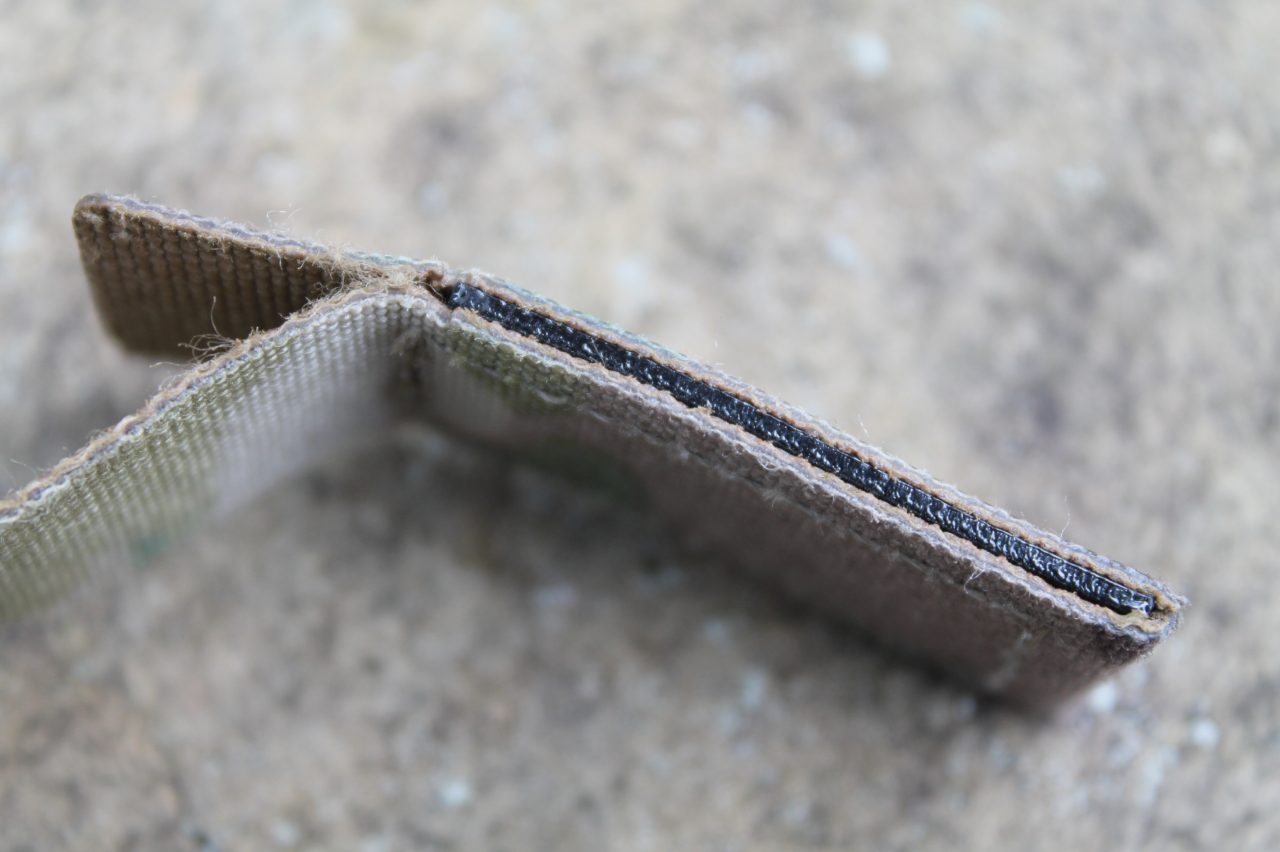 The PALS attachment is via a laminate strap with tuck tab which is both a lightweight and low profile system and also one that is employed by various other makers of quality kit based on the the fact it is not only light and slim but secure, easy to manufacture and not patented by anybody.  It takes just a little bit of effort to bend the plastic stiffener at the end of the strap when you’re finishing off mounting this pouch, but once it’s in there it is definitely not going anywhere. 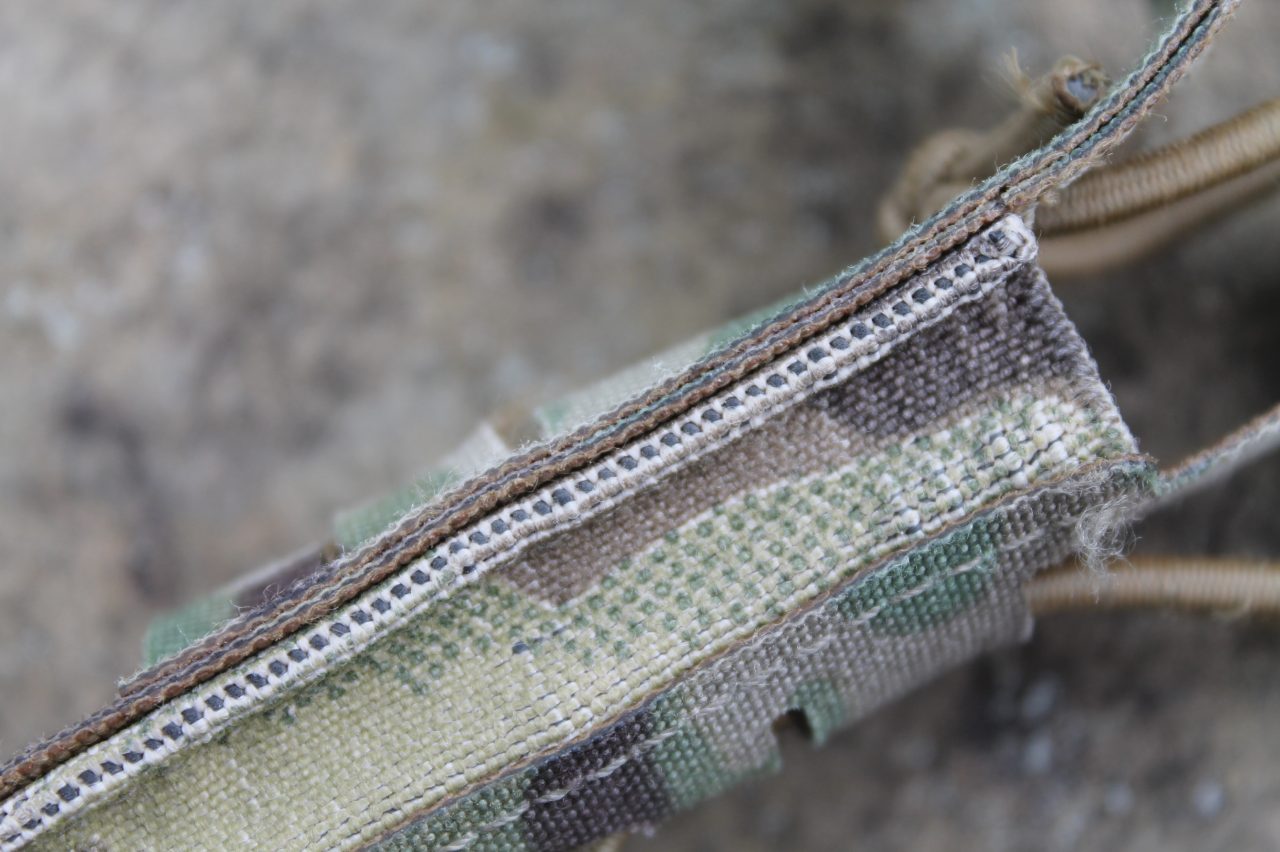 Materials wise, most of the Horizon Laminate line uses a fusion of 1000D Coyote Brown cordura with 500D Multicam cordura on top to form a strong MTP/OCP camo compatible material that is highly suited to the laser cutting process and extremely resistant to abrasion.  You can just about make out the two layers of cordura in the side view shown above.  The black and white edge is the end of the elastic and this is the only area I could see a potential for perhaps some premature wear to occur. I was actually somewhat surprised to see the ends of the elastic not sewn such that they are facing in to the pouch, though doing that can also have the potential to somewhat hinder indexing of magazines to a small extent.

All the imagery in this article was taken after I wore this pouch all day, everyday for two months during the latter half of my deployment.  Prior to receiving it I had been carrying my spare Glock mag in an Eagle FB pouch I’d scrounged up which was roughly twice the thickness, sat lower on the belt and protruded far further from my waist and often dug in to the front of my upper left leg when sitting, leaning or squatting.  The Horizon pouch sat higher and held the mag much closer to the belt, this combined with the nicely curved base (compared to the box-like Eagle design) made my life a lot more comfortable.

I am no professional gunfighter by any stretch, I cannot say from personal experience if any piece of gear will withstand many months of dismounted patrols involving a lot of diving down on rocky surfaces, crawling on rough terrain and climbing in and out of rotary platforms and armoured vehicles etc.  All I can say is that after 2 months of wear everyday with a lot scuffing by ammo tins and being scraped on the roughly surfaced concrete floor, the only signs of wear were a few very, very small areas at the edges of the cordura, some of which you can spot in the photos.  My experience utilising other laser cut cordura products for work over extended periods showed the exact same sort of extremely minor fraying after a few months of constant wear, though the Horizon Laminate performed just a little bit better in this department, which I would attribute to the 500D Multicam being bonded to another even strong layer of cordura.

Double and triple 9mm HL pouches are not available at this time but given the popularity of double pistol pouches I’d like to see them on the market soon and will certainly say as much to Flimmuur and British Tactical.  Pricing wise these come in at £17 (purchased directly from BT) at the time of writing and I find that very impressive given the high standards of overall quality, UK manufacture and use of legitimate Multicam/mil-spec materials throughout.

An equivalent BFG Single pistol with PALS mount costs £22+ in the UK and if anyone were to come to me and ask my advice on which to buy I’d say go with the horizon every single time given that you are getting much more durability and adaptability yet paying a lower price.  The HL 9mm weighs in at a mere 20g which is pretty crazy in and of itself, but the BFG belt mounted single pistol pouch weighs exactly the same yet has far less cordura coverage and will not hold up to nearly as much wear and tear.  That only serves to make the choice an even clearer one.

You can check out what the manufacturers themselves have to say about this pouch via this link and also view the full line of Horizon Laminate products while you’re there.  The entire line is made in the UK as I mentioned at the start of the article and every purchase comes with a lifetime warranty against manufacturer defect.  That doesn’t mean you’ll get a free replacement if you rip it open on a rock after 5 months of constant use, but if something goes wrong that is the manufacturer’s fault they will certainly sort you out.  They have some good looking options for a variety of pocket types that warrant a closer inspection at the very least.