So you’ve got modularity on the front of your rig, that’s good, probably the priority, but now what about the back?

Check out this article if you’ve missed it for a detailed discussion on what I find to be the ‘perfect’ assembly of gear to form the optimal modular magazine carriage:

With the front business out of the way it’s time to look at the party in the back, in this case in the form of the TYR Tactical, LLC Standard Assaulters’ Zip-On Platform. 70oz hydration size to be exact. If you happen to use something like a JPC 2.0 or Vel Sys Scarab then you will already have zips built in to your rear plate bag and a few choices of modular back panel available to you. The great thing with the Tyr product however is that as long as you’ve got enough PALS real estate you can mount it to absolutely anything. Since the zip mounted panels aren’t currently something FirstSpear offer integrally with their PCs and I wanted that modularity on the rear as well as the front, I thought I’d see what I might be able to puzzle together.

There is a very substantial caveat here in that you need to really take the time to count your PALS rows and columns before purchasing any piece of kit like this. Especially from Tyr given the fact they not only are they a brand that’s up there in quality and price but also build almost everything to order and have a fair lead time. If there’s one thing buying lots of gear over many years has definitely taught me, it’s that it is crucial to take a few minutes and do a careful visual check of your current kit vs the size of what you’re buying. It may make you feel like you’re going a tad cross eyed trying to count PALS rows on a small website image but it’s so much better in the long run than waiting ages to get something just to find

This can apply to sizing on things like belts as well, but for large pouches and platforms it most definitely comes in handy. If you read the above linked article for example you’ll have seen a custom setup on the front of my MBAV cut FS Strandhogg – I had to very specifically buy the MBAV to make that whole thing happen as the SAPI cut I already had in my possession at the time simply lacked the necessary number of PALS rows to attach both the loop field and the female 1″ buckles. Just the same happened on the back as well, with the SAPI cut having the steeper angles at the top it lacked the necessary height of PALS rows, but the more rectangular MBAV provided more space and just manages to fit the Tyr panel. 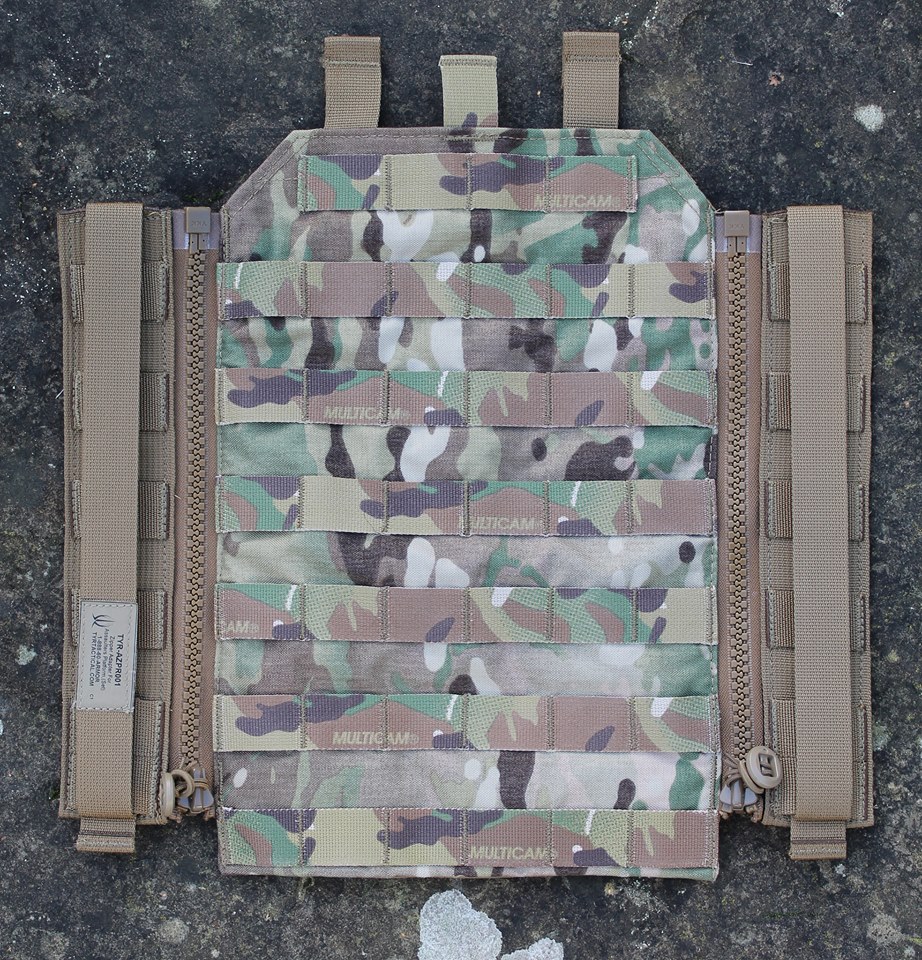 As you can see the Tyr setup is simple to install, you just thread on the 2 separate zip mounts and you’re ready to attach any of the numerous panels that are on offer. There’s simple PALS panels like this one which have an internal space for a hydro, then there are other variants with sewn on pouches, one with a small pack and even one for specific breathing gear. Swapping between any of those, or indeed just going back to slick, takes around 30 seconds. The zip mounts have internal stiffening and are also available to buy on their own, so once you’ve bought a panel you can share that between multiple platforms if desired. Exactly the sort of product line-up that I like to see.

Construction wise they definitely went all out on bar-tacks and webbing as you can see in the pictures. Personally if an option was available with none of the loops on the panel itself and with slicked down zip mounts I’d go for that. Even though I’m often a critic of hypalon I’d actually like to see the zip mounts made from said material, or even just a lighter cordura since they’re mostly going be covered and protected when in use – that would shave a nice bit of bulk and weight by comparison to the current all-webbing design. There’s no denying the long term durability you’re getting here though.

The only slight shame is that there’s no commonality or cooperation between manufacturers even though these rear zip panels have become quite popular now. For example, just off the top of my head I know Crye, Tyr Tac, Velocity and LBX are all making them but none of them are interchangeable on account of the zip types and panel sizes. There has been some standardisation on the Velocity Systems spec for front placard mounting so it is possible, but there’s been a lot more demand in the market for the placards by comparison to rear panels so you can see how the current situation has come about.

The picture accompanying this post shows the 70oz panel attached to a Medium Ranger Green FirstSpear AAC back panel, I’ve since moved the entire setup to my Medium Multicam MBAV Strandhogg but fortunately both are tall enough to accommodate. Again if this is something you’d like to add to your own kit be sure to take the time and count/measure everything up.