Took me some time to get everything together to make these posts, but I think I’m sorted now. So here’s the Commercial Camo Showdown, Part 1 of 3, starting with the woodland and temperate environment edition.

If you look around at the product that’s actually stocked and available at retailers in these modern commercial patterns you’ll generally see the majority is temperate, some transitional and the arid variants tend to be less common. A-TACS would be the main exception since they started out with their arid variant and it stuck. Of course Crye also started with transitional Multicam and didn’t release their ‘book end’ patterns until many years later, but due to their popularity they’ve proliferated Arid and Tropic far more than some competing equivalents.

As many will be aware, the trend amongst various communities during the past 2 years or so has moved away from these commercial offerings and there’s a lot of demand out there for the military patterns of 10-20 years ago. Somewhat expected because the US Army has basically adopted multicam now in the form of Scoprion W2, similar story with the British military in MTP, fairly similar again with the Australians with AMCU items and plenty of other forces around the world have also used or adopted Multicam or some slight variation thereof – everyone’s looking rather similar to say the least. The old system from the 80s and 90s that so many of us grew up seeing (or being issued) generally revolved a woodland pattern for in-country/garrison wear and a desert pattern for a lot of the deployments. But that system is either gone or going now as camouflage patterns that were largely designed around the Vietnam era come due for replacement or update and smaller budgets combined with the environment of the Afghanistan conflict mean most roads have lead to adoption of a single, transitional camouflage uniform for absolutely everybody.

If you’re interested in this stuff and you collect it or airsoft or use tactical gear for whatever hobby you happen to enjoy and therefore get to choose the pattern you wear, the lack of variety in the look of military kit these days probably doesn’t exactly thrill you. Hence the resurgence of popularity in the likes of US Woodland and temperate Flecktarn. If you look at just Europe in the late 20th century, an awful lot of countries had their own unique temperate and arid environment patterns. You had both types of DPM, Flecktarn, Norwegian M98, Swedish M90, Danish M84, Italian Vegetata, Begian Jigsaw… and the list goes on (if some of those are uniform rather than pattern designations I apologise, I’m just going off Camopedia).

Personally I was really getting in to all this gear stuff shortly before the initial release of ATACS-AU and at that time the only options for camouflage apparel out there were essentially either military surplus uniforms, some replicas thereof and maybe Multicam if you were throwing money around and knew where to get it (certainly the case in Europe). So when ATACS was due to first release, there was a lot of hype generated. It was the first commercial pattern to hit the market in a big way for some years and people were very interested in any alternative to the common selection of surplus BDUs that had been floating around for a couple of decades by that point. Multicam wasn’t anywhere near as popular or widespread as it is now and a lot of people simply didn’t understand the merits of a transitional pattern because they basically didn’t exist in any quantity before MC came along. Obviously you might debate that based on the colour palettes of some older stuff out there, but the concept itself only really gained big traction in the west in the 00s.

In future I’d like to get hold of some more of the old military patterns myself, but my priority is almost always cut and construction over aesthetic and a lot of the old patterns simply haven’t been manufactured in a modern combat cut or using NYCO, so I’ve used what storage space I have available for the commercial offerings that are modern styled and well built. Another factor in this of course is that it’s far more viable for a company to stay up-to-date on their designs than it is for a whole military force to change their adopted uniform every 3 or 4 years. 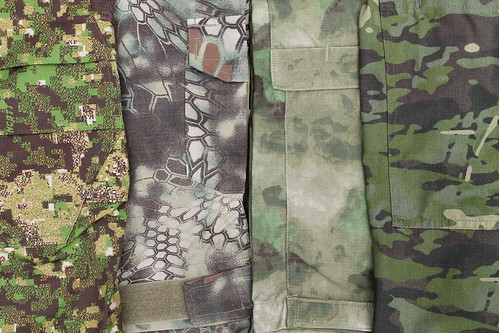 But for comparison now, working left to right, we have the following, all in 50/50 NYCO:

If you’re searching for a high quality, combat cut of uniform then GreenZone and Tropic are probably your best bets at the time of writing, in Europe and the US respectively. Kryptek was mega popular for a while when HSP was selling it and Plat-A-Tac was manufacturing combat uniforms, and it is still around, but it’s not as common as it once was. ATACS-FG is certainly available and floating about, seems to actually be quite popular with some Russian manufacturers, though I’ve no idea if they use the genuine fabric.

Now you’ve read my thoughts I’d like to hear what your preferences are in the comments. Temperate patterns and/or companies that make them. Or indeed anything else you’d like to put on the table with regard uniforms and camouflage.