We’ve looked at the temperate and transitional offerings from the 4 primary competitors in the modern commercial marketplace, which leaves just the ‘desert’ patterns and variants to cover. 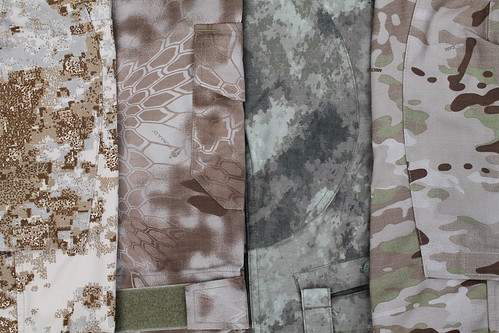 This third part of this weirdly-niche showcase was the trickiest part to complete by far. I was able to get all 4 of the woodland patterns together easily, the transitionals only slightly more tricky than that, but finding Sandstorm and Nomad was a challenge. Now to be clear my criteria wasn’t to just buy any piece of clothing in the pattern for the sake of posting this comparison, everything I buy has to meet various criteria to fit within my collection and what I want to actually do with that item.

The formula for that decision making is rather long winded and not necessarily 100% consistent as it depends what I’m after at the time. My overall goal is to have the highest quality piece I can get of a given pattern/colour, however sometimes I want something specific to post/review or to write about to illustrate a learning point; or alternatively I don’t want to buy just another copy of the same garment from a brand I’ve already got well represented. That’s not including of course the fact that sometimes you just stumble across a real bargain on something and while maybe it’s not quite ideal, it’s very close and entirely worth the very minor concession when taking in to account the money saved.

The hardest thing to track down was most definitely the Kryptek.
There’s been a lot produced commercially in Mandrake, Highlander and Typhon and I think there was some Nomad floating around when Kryptek first hit the market, but at the time I was searching it was very thin on the ground to say the least. I was very lucky to find a really well made combat cut set (which is what I primarily always look for) on Australian eBay, because it looks like Platatac literally only manufactured a dozen sets or less when they were making the other Kryptek patterns Tac Dax sets and they presumably were found in a dusty corner of the warehouse some time later.

The Rasputin shirt is at this time the only budget china-clone piece of gear I actually own. I opted for it for a couple of reasons. First because the brand (which as far as I can tell is literally just TMC) uses the genuine 50/50 NYCO PenCott fabrics and sew them in to the familiar G3 cut. Second because the pricing of the shirt was around what you’d pay for mid range clothing like Tru-Spec or Leo Kohler and I wanted to have something from the clone chinese market to look at and compare on video, given how massively popular such clone gear is with airsofters.

As you’ll note, Sandstorm, AU and MC Arid all share some fairly similar mid browns and tans but each have some unique elements. The PenCott features a small amount of grey shades, with dark browns in Nomad and Multicam-esque light green blotches in the Arid. AU is by far the darkest of the lot, standing out substantially with some near-black tones and a bit of green, better suited for more arid urban and rocky terrains whereas the others will presumably blend more in the stereotypical ‘desert’ backdrop.

The interesting part I find about this set is that ATACS-AU was the first of any modern commercial camos to really hit the market in a big way apart from original Multicam and it really began a big trend that was all over the tacticool social media scene for a few years until the older military patterns got back in to popularity. Original AU was hotly anticipated before Propperput it on to the market around the turn of the decade and the FG variant was again very popular when it arrived on the scene shortly after AU. All the Kryptek patterns enjoyed a very strong spotlight for a good couple of years when these commercial offerings were at the height of their popularity, then PenCott probably came along towards the end of that general phase. The Multicam variants of course came along quite a fair bit later than the rest and Tropic certainly seems to be the most widespread of them, with very little Arid seeming to be out there despite good mid-range and high-end offerings being easily obtainable from Tru-Spec/SKD and Crye respectively.

I’m undecided on whether I’ll do a 4th ‘Urban’ part to this series later down the line as I’m not a big fan of either ATACS-LE or MC Black and my storage space is really maxed out at this point. PenCott Metropolis isn’t available yet and Kryptek Raid NYCO fabric has never been printed to my knowledge, so I only have the sports type jersey for demonstration. But if any of you out there happen to own LE or Black and wouldn’t mind letting me borrow some of your camo gear at some time very briefly to feature here, feel free to get in touch via the direct messages. I’ll never have the physical space to own one of everything so anyone who’s willing to lend a hand then said hand will be gratefully received.