Yes that’s right, it’s what you have literally all without a shadow of a doubt been waiting for, literally hanging off the edges of your seats, it’s the Commercial Camo Showdown part 2 of 3 – Transitional edition (Nothing to do with all the noise the US Army is making back and forth about certain people serving). 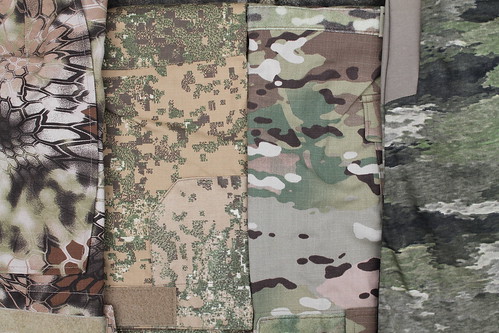 NB – The ATACS is cotton jersey from the shirt body rather than the NYCO in the others, because OPS pattern and cut their shirts in such a way it didn’t want to sit flat (which is a good thing), but the representation is still pertinent.

Of the 3 categories, this one is different from the rest in that transitional patterns are actually far more commonly coming from commercial manufacturers. Military adoptions of transitionals are comparatively speaking much smaller in scale than the 2 woodland/arid book-ends when you look at this from a historical perspective. Also there’s the fact that US and UK selections of Scorpion W2 and MTP respectively are *pretty much* just multicam, especially in terms of colour palette. From what I’ve seen Germany is also looking at a pattern that is their own MTP, i.e. it’s the geometry of Flecktarn in Multicam colours. Wouldn’t surprise me if lots of other nations do/are doing the same thing.

The other aspect of this comparison I find interesting is the large gaps between the colour palettes of the different options. To my eye the disparity across this range is significantly more than you see in the aforementioned book-end options.

Highlander contains barely any green, when I first purchased some I thought I’d gotten Nomad until I actually looked up Nomad. I don’t think this actually precludes it as a transitional pattern you just need to stick to areas with more brown and less green. Now Badlands adds a bit more green to the mix, but then there’s also less browns and a strong showing from the light tan, similar sort of situation to Highlander.

In retrospect the area of Multicam I’ve shown isn’t the best representation since it’s more green-dominant than MC is on average, but all things being taken in to account the overall colour palette has the best performance in a variety of environments that I’ve seen. Against light green foliage it always blends well but when you take it out to the brush-type desert (I took some MC US issue kit with me to afghan alongside my MTP) it also does a fine job. My personal feeling is that Caleb Crye is a secret time traveller and knew just the right time to create and sell a pattern that was best suited to Afghanistan but that’s another story.

iX at the far end has plenty of greens and very dark browns, even borderline black areas in the pattern. Not much in terms of khaki and tan shades. I’ve found it work really incredibly well in some soggy English woodlands. I’ve not seen any images of the pattern in a properly transitional environment so no comment on that right now.

Overall it’s a rather subjective area of camouflage because different swatches of fabric and people’s perception of colours and dominant shades in patterns definitely vary a lot; so classification can get a little muddy. While I am somewhat ‘bored’ of Multicamand and its’ derivatives now as far as uniforms go, I think you’re pretty ignorant of the reality if you try to knock its’ effectiveness in context. Or you’re a never-served airsofter, which I also nearly am but I can segregate my personal tastes from reality.

I’ve seen barely any Badlands or iX out there being used by anyone, airsoft or service people. Highlander was definitely popular for a little while there but generally the woodland variants of Kryptek, PenCott and ATACS seem to be by far the most widely distributed. So let me know in the comments what you like, own and use and where you use it.  Brand, patterns etc.