First off, for more imagery and information on the suite of 1st Generation uniforms from Crye Precision click right here. 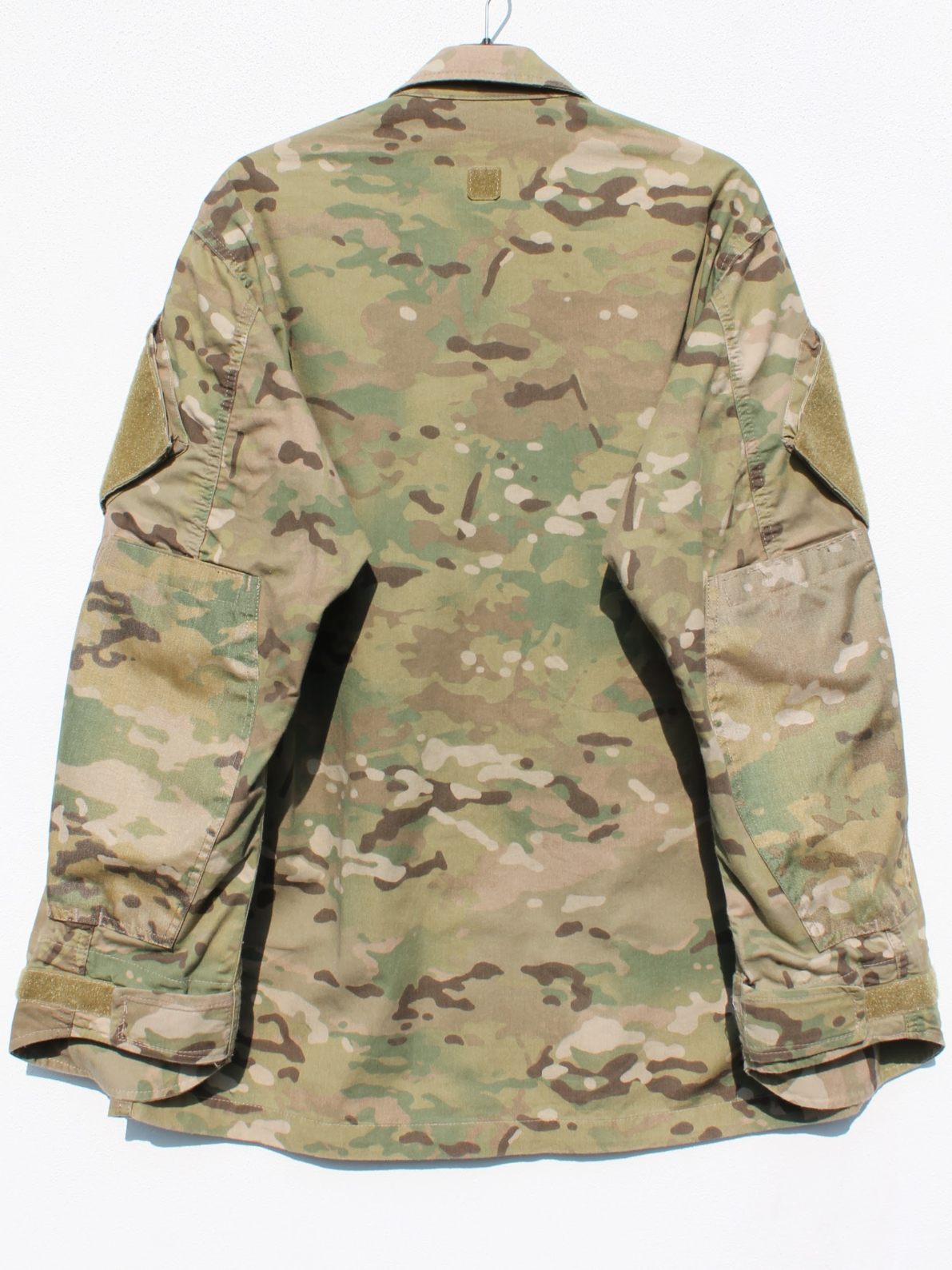 Crye’s Gen 1 field shirt is perhaps the least significant departure from items that already existed around the turn of the millennium when G1 was commercially released.  Apart from the new (at the time) Multicam camouflage pattern, this shirt isn’t that far off a RAID modded US issue BDU shirt that would have been popular amongst SOF throughout the 1990s and early 2000s. 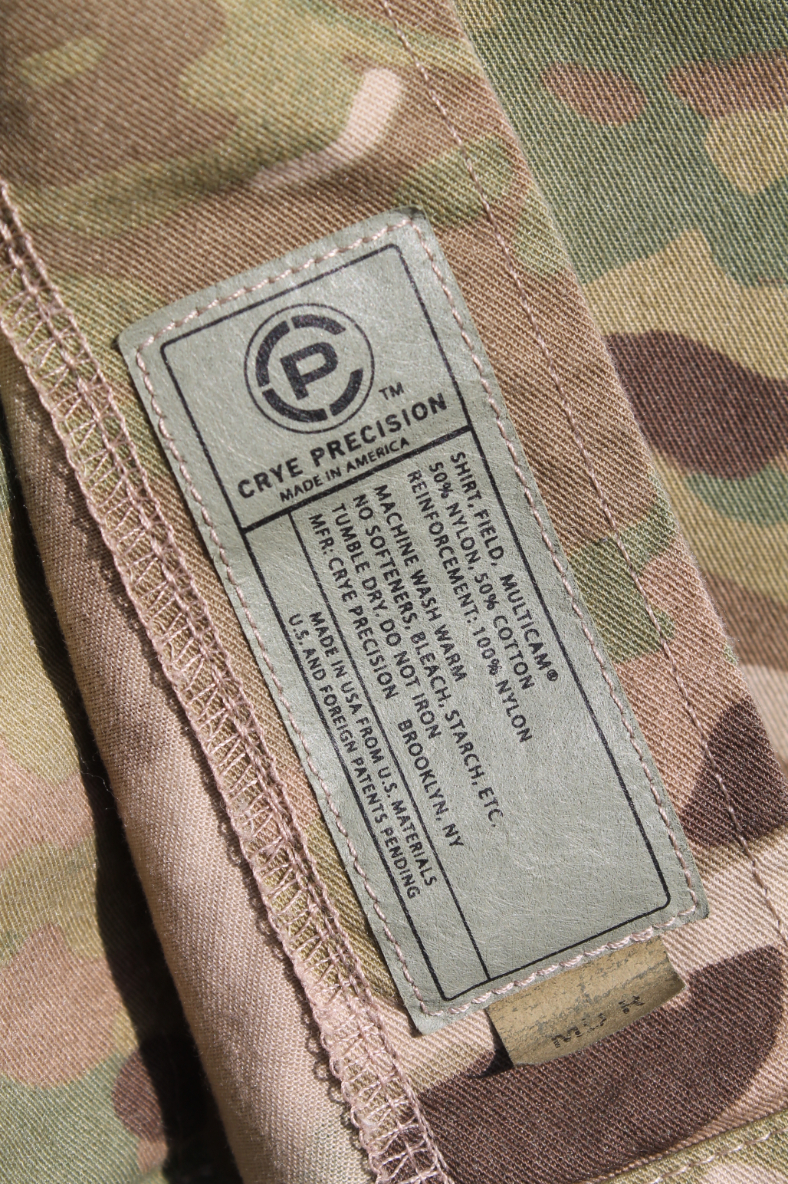 Unusually, the sizing tag  below the information label has worn and faded significantly more than the information labels itself on my specific example here.  The primary fabric as with all Multicam G1s is a NYCO twill and there’s also some cordura attached for the ‘Reinforcement’. 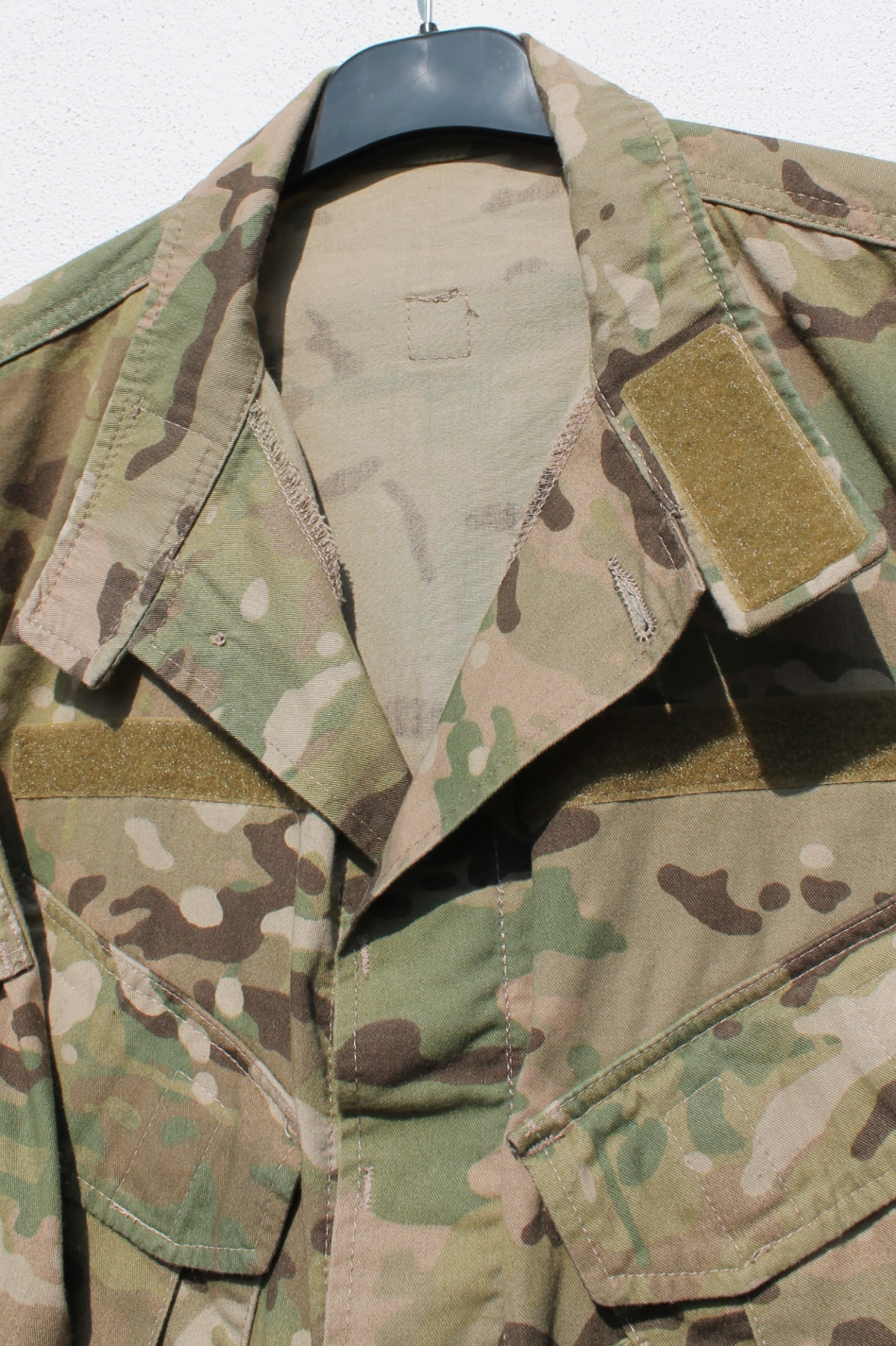 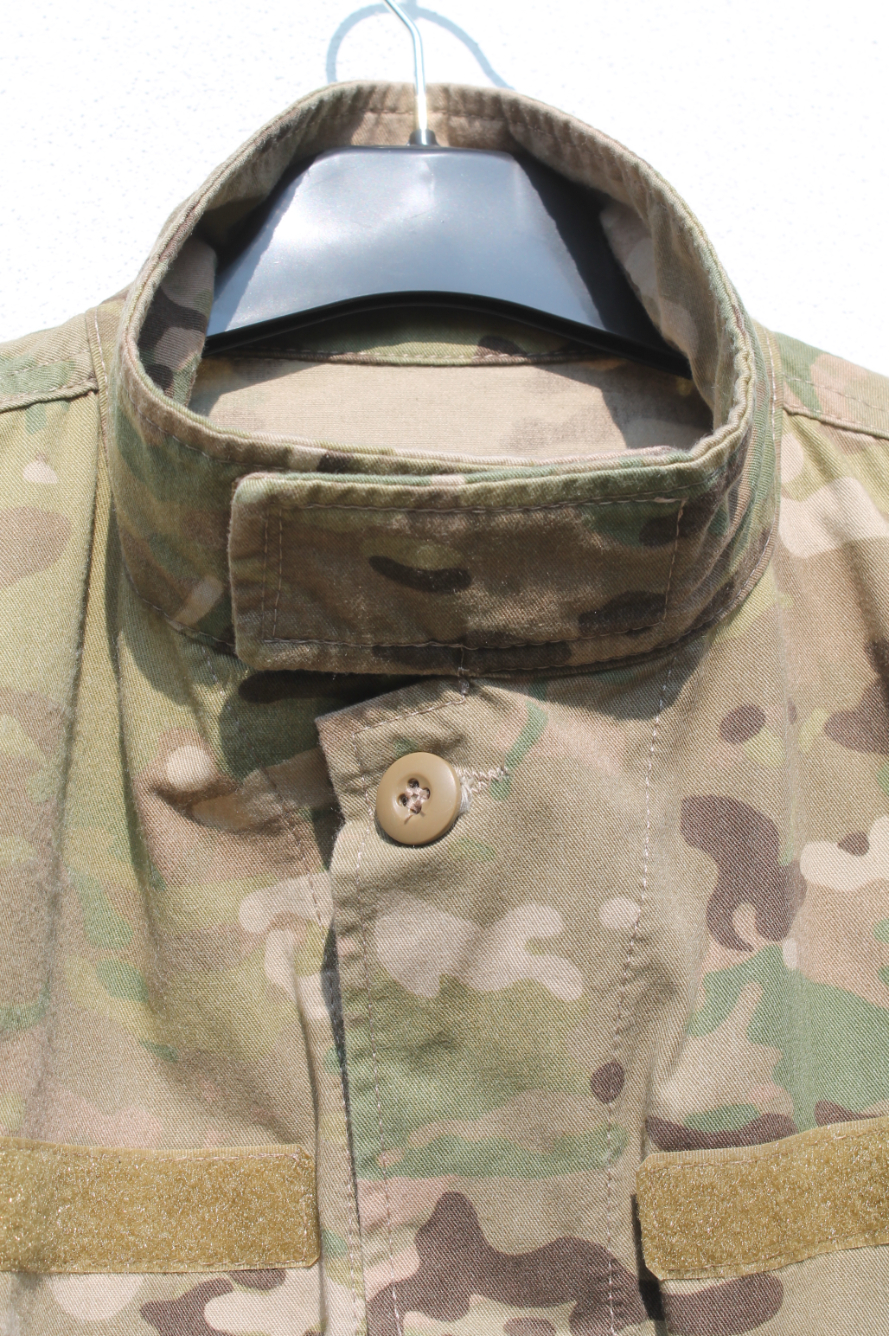 In terms of the collar, the shaping and velcro tab means it is well setup for both the classic barracks/hot weather V neck and the ‘mandarin’ style that was sometimes incorporated in to RAID modded BDUs.  Great for protecting the neck when needed; shown above in both configurations.  The ACU cut that became US Army and Air Force standard issue borrows heavily in this area. 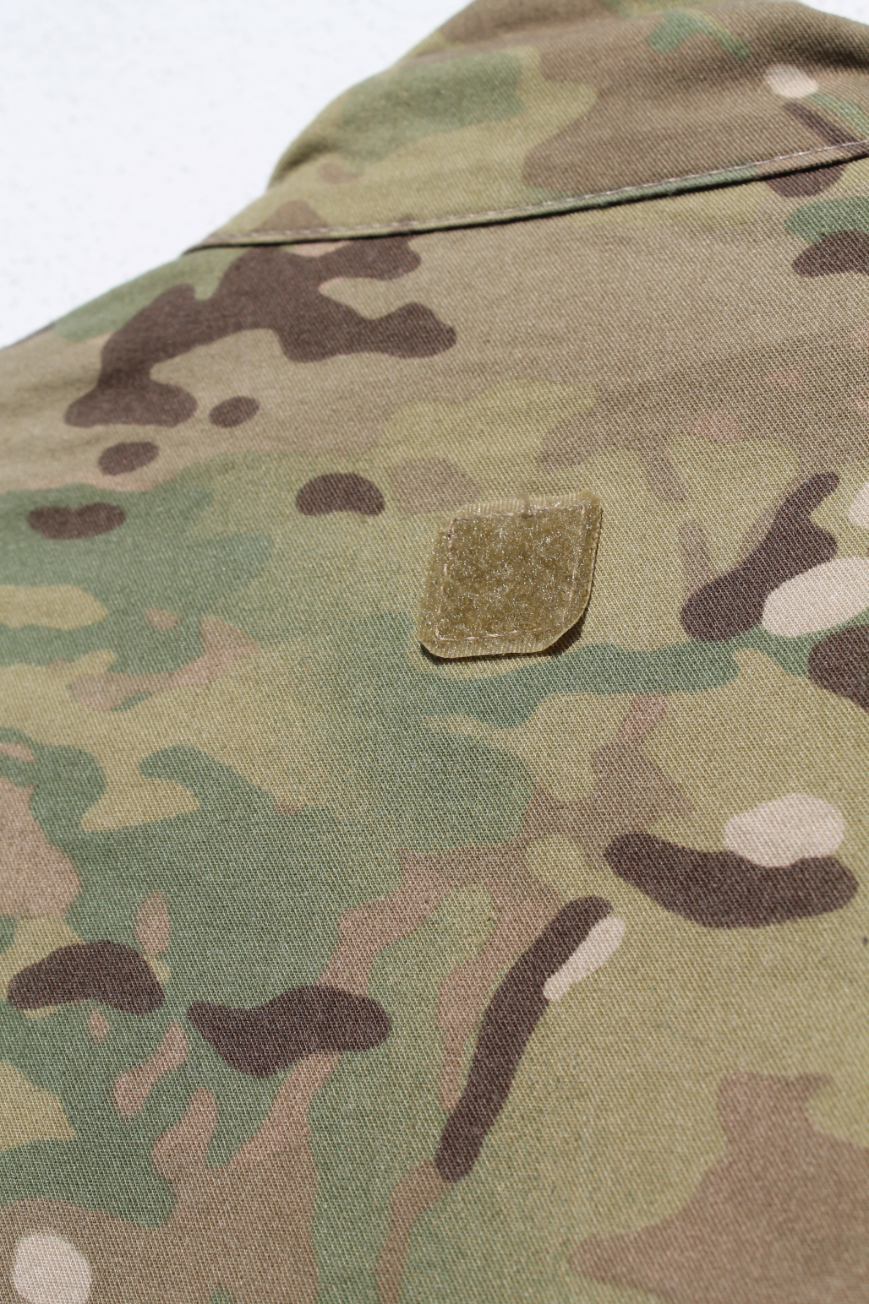 I can only presume this small 1″ square of loop on the upper back is for attachment of IRR material or glint tape of some kind.  Clearly the idea wasn’t a popular feature as this was not carried forward in future iterations of the Crye field shirt. 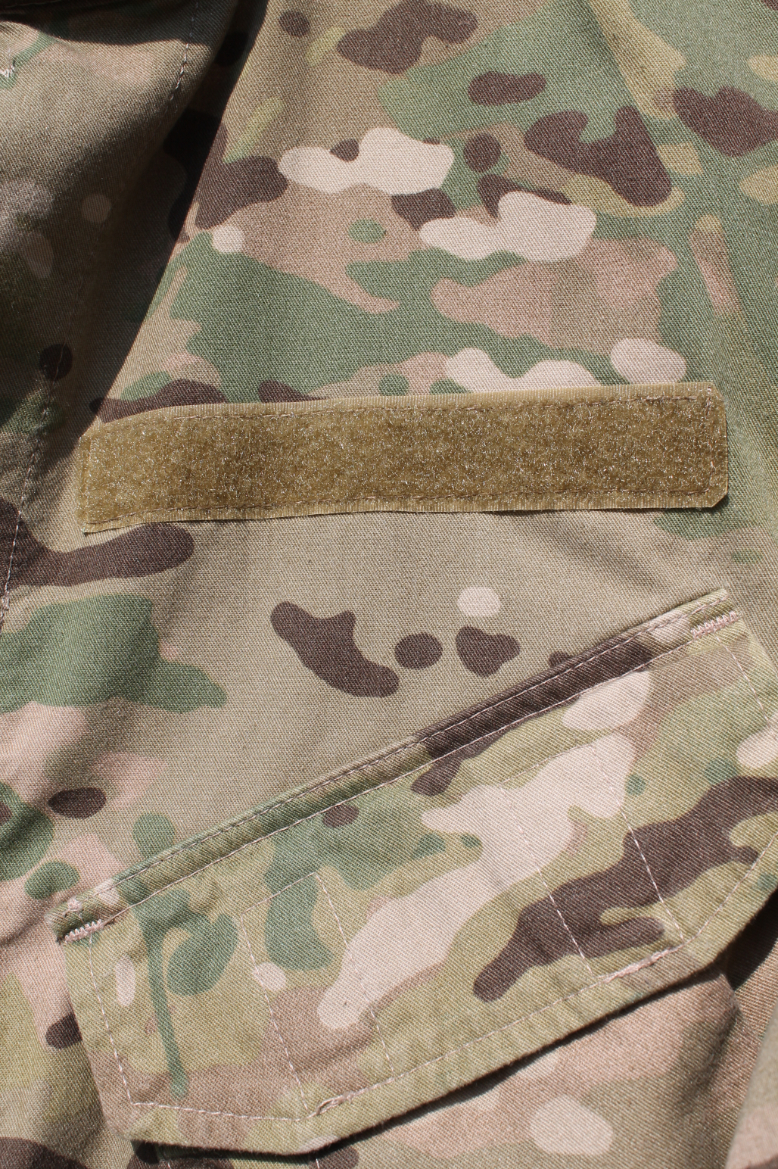 Standard US military issued style name/service tapes attached with velcro are catered for with appropriate sized strips of loop velcro on both sides of the upper chest.  There is no provision for display of rank however. 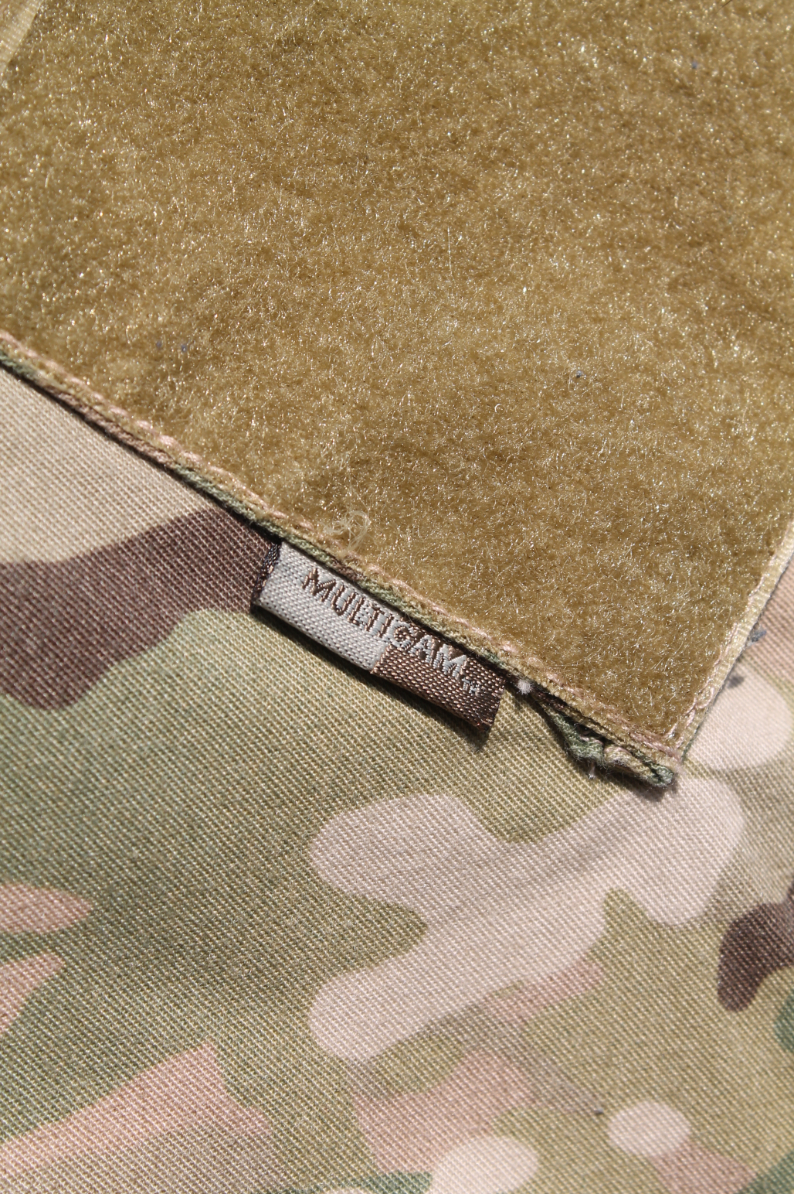 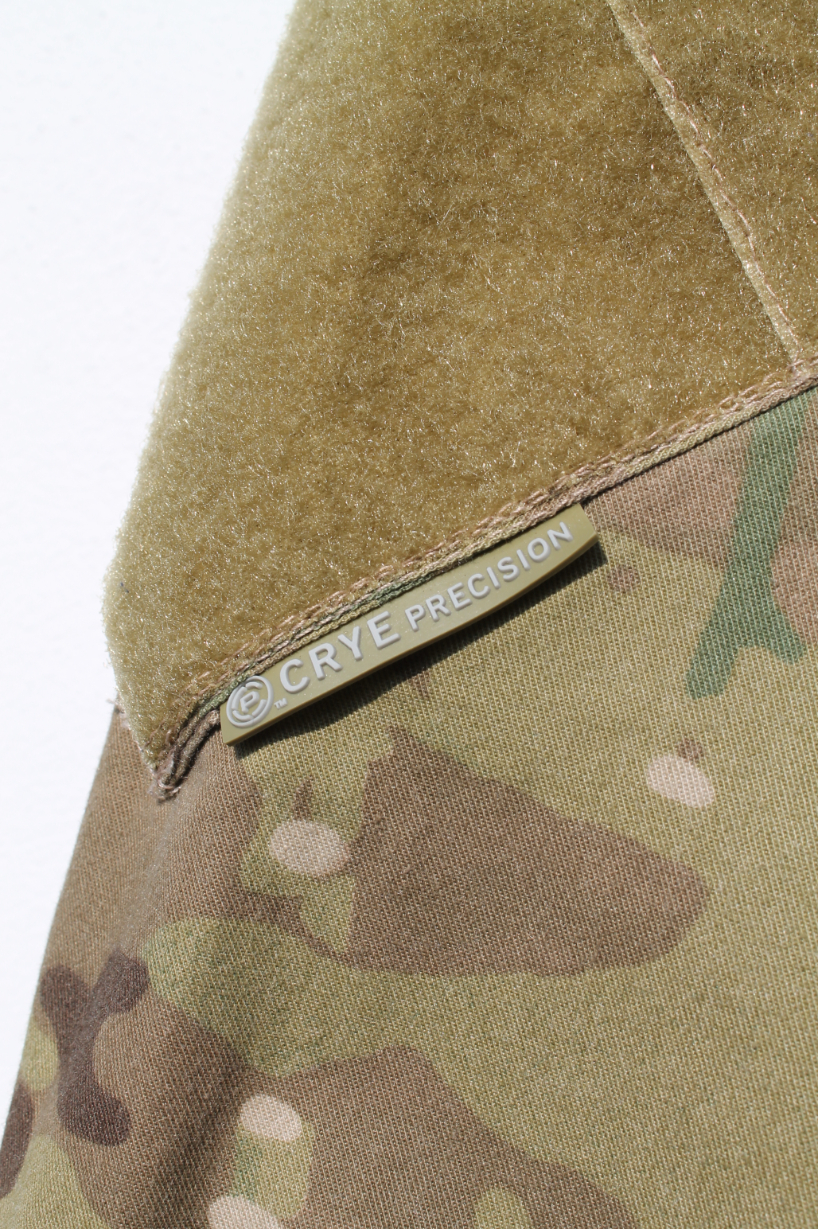 Style of the branding tag for Multicam remains unchanged to this day, but the green rubber-like Crye tag only stayed on for Gen 2 then was replaced by the black and white branded edging tape/grosgrain in Gen 3 and 4. 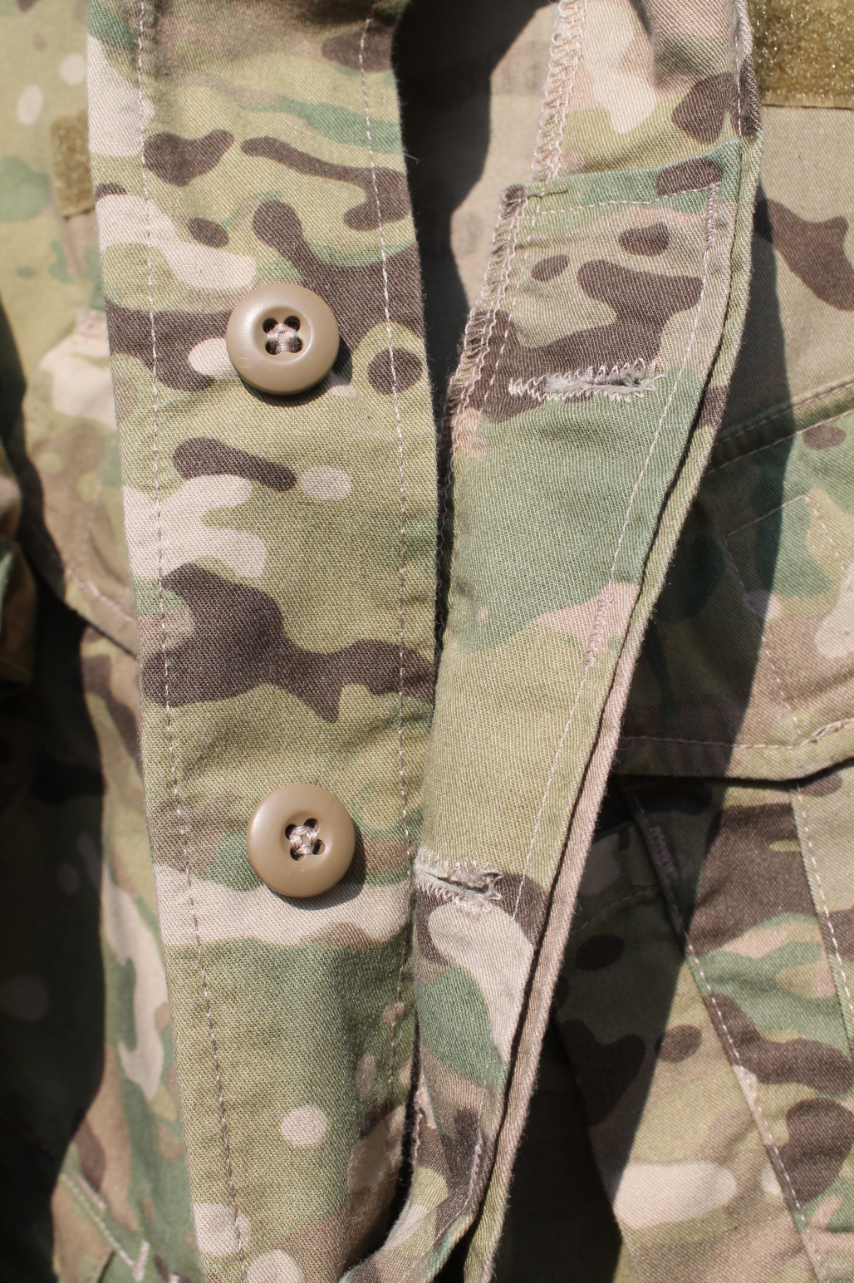 Main front closure is typical US uniform style 4-hole buttons with a covering front flap of fabric.  All 4 generations of Crye field shirt are the same in this regard, so the humble button is hanging in there very well. 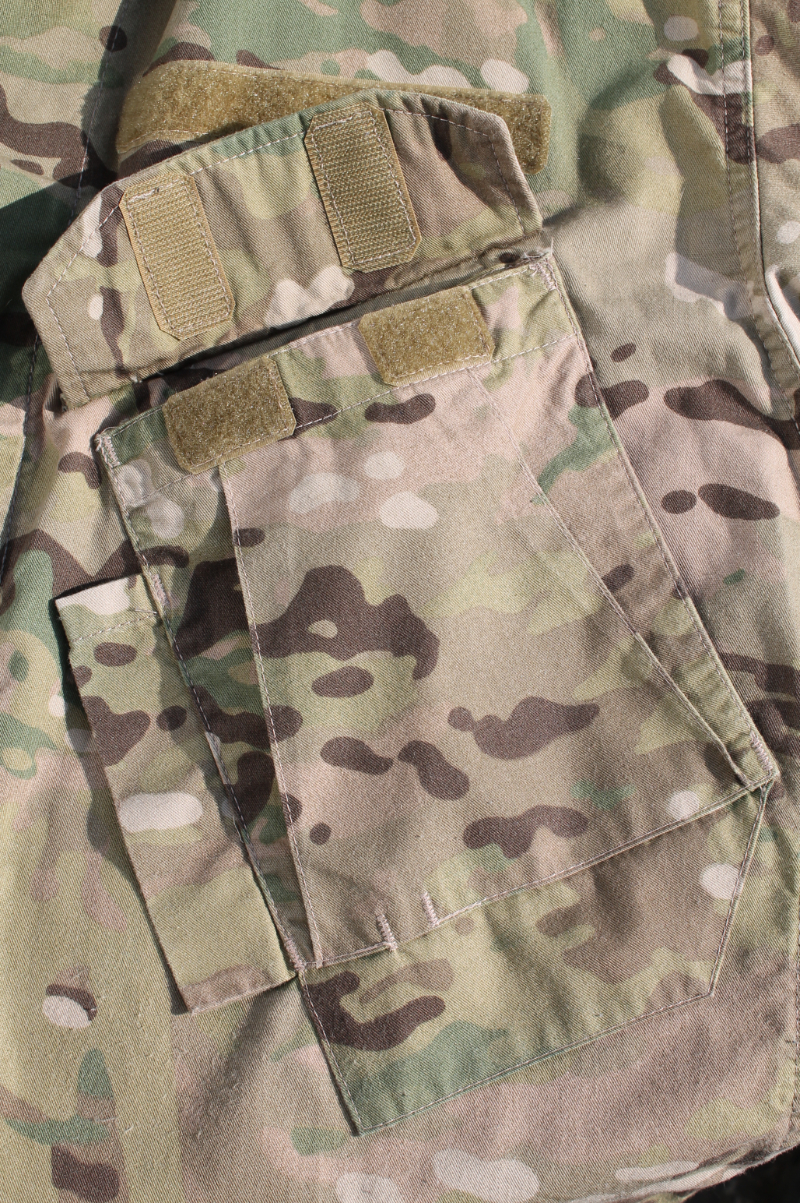 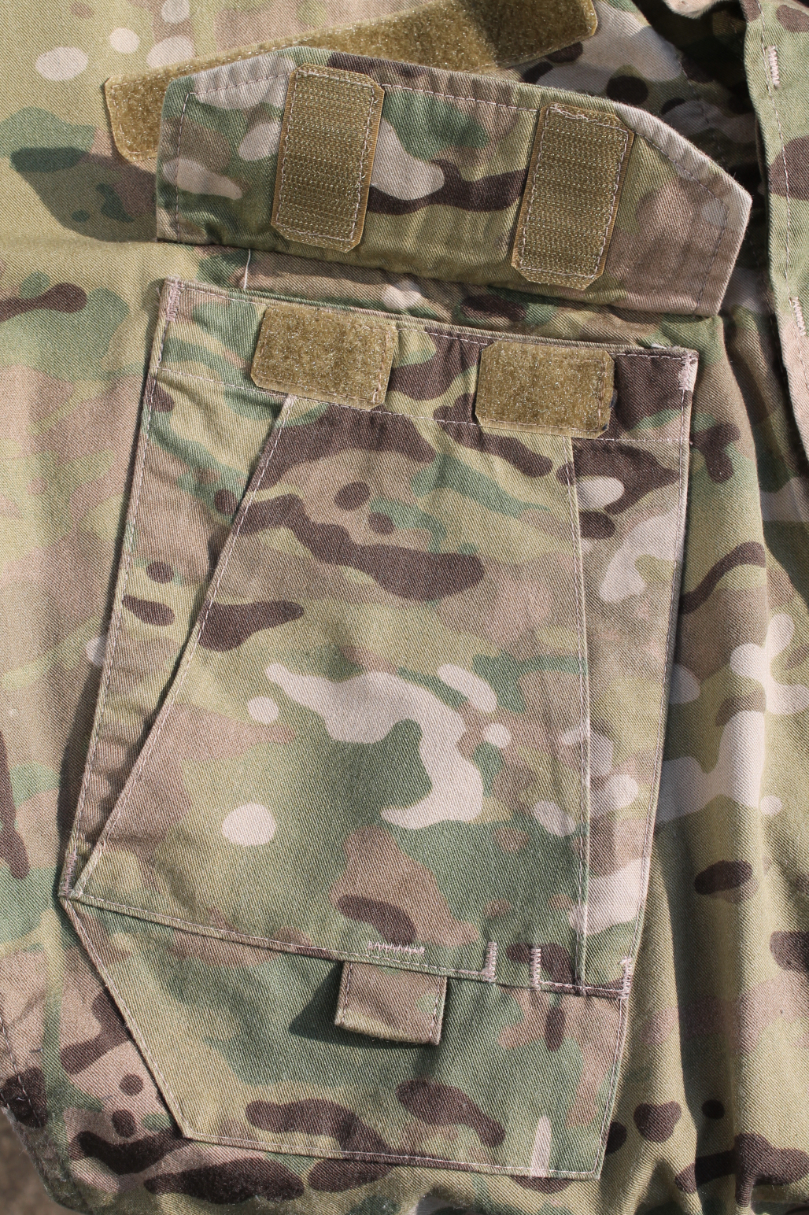 Both chest pockets angle inboard with velcro flap closures and sewn drainage points.  The right chest (when worn) has a hanger point while the left has a pen sleeve.  Both have these interesting angled pleats as well as stowage areas behind them, which extend right down to the bottom of the sewn on fabric you can see with a 45 degree cut on the bottom outer corners. 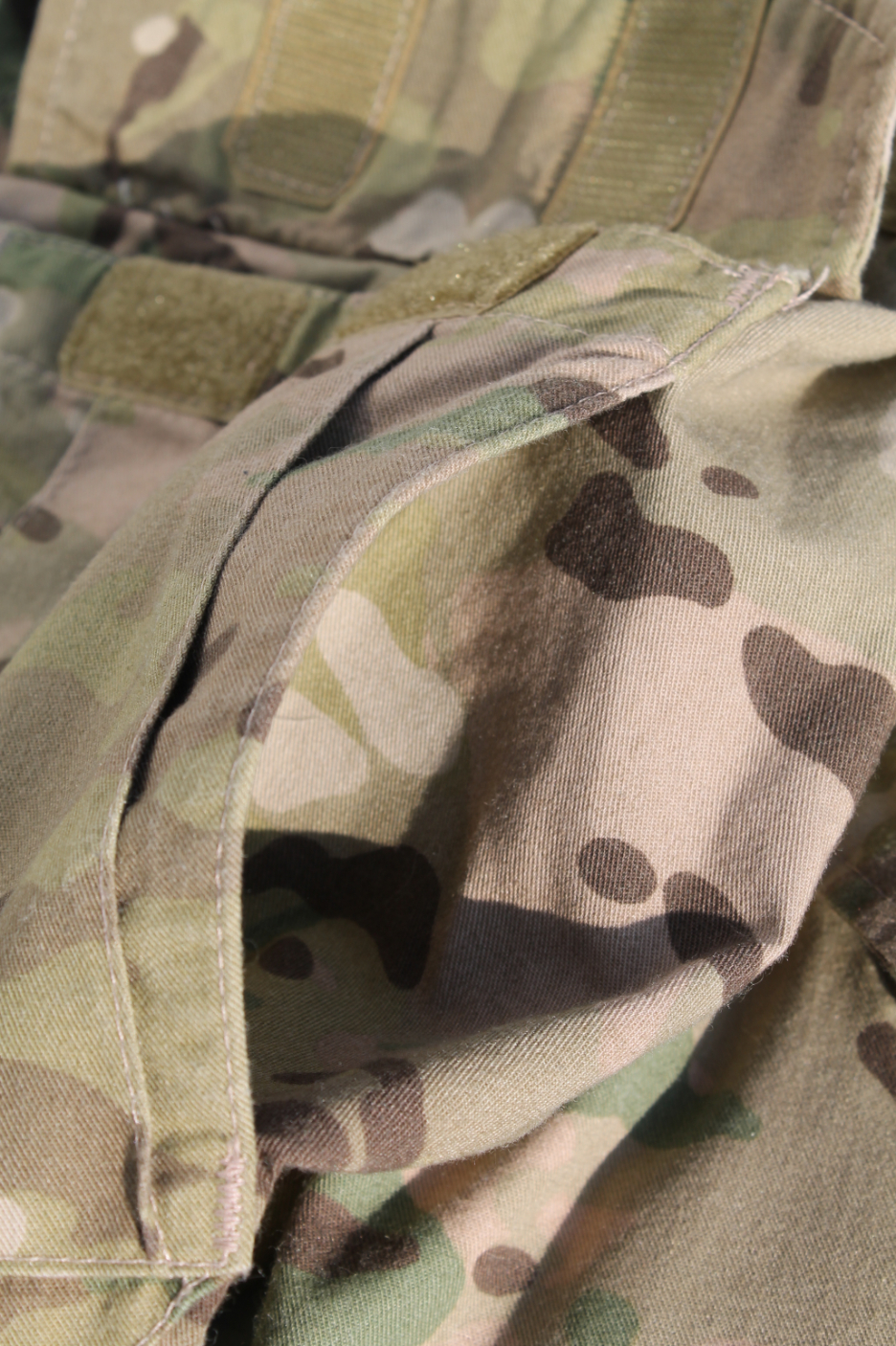 These stowage areas behind each chest pocket lack any closure or security.  They carried through to Gens 2 and 3 but not in to the current G4.  I would assume they are intended for folded maps and other such documentation which is slim, light and needs to be accessed frequently but won’t likely bounce out of the unsecured stowage when running. 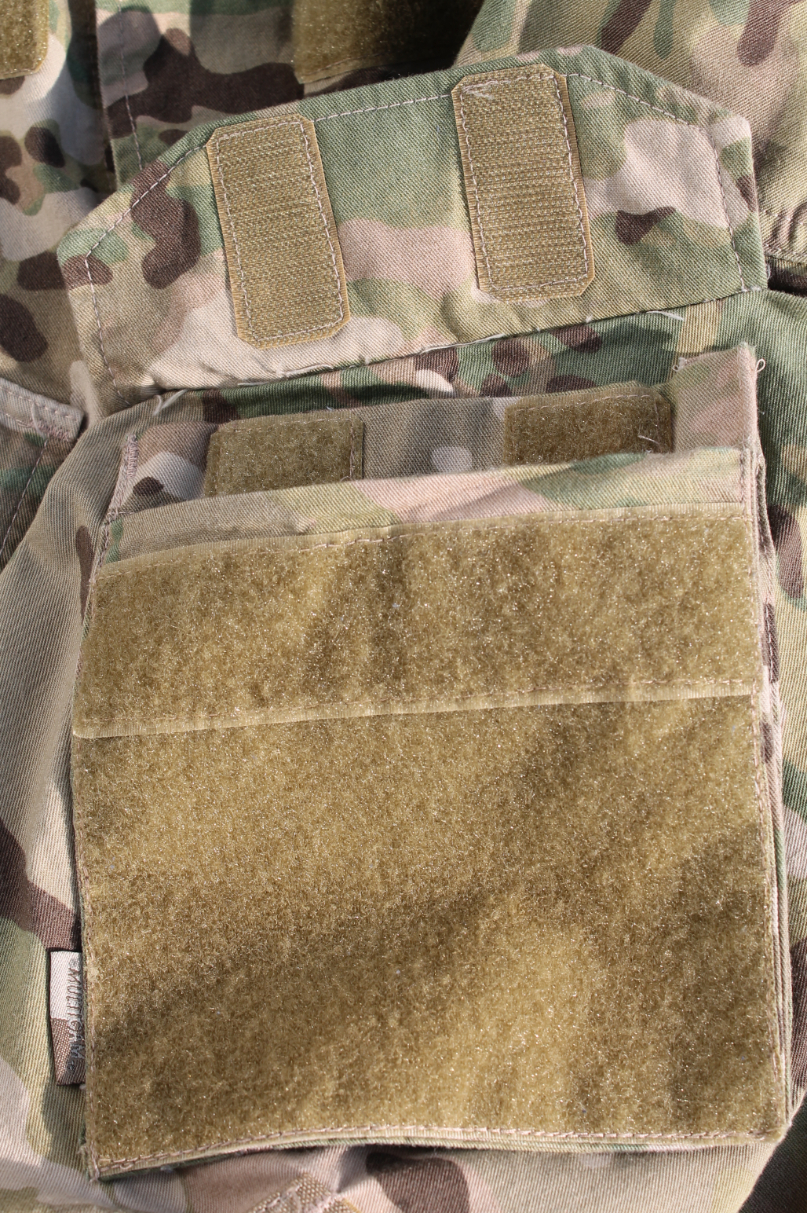 A total of 5″ square of loop is affixed to the outside of each upper arm pocket which is split as shown, presumably as 5″ loop on the roll would not have been available to manufacturers back in the early 2000s.  Inside each arm pocket there is a divider creating 2 separate spaces. 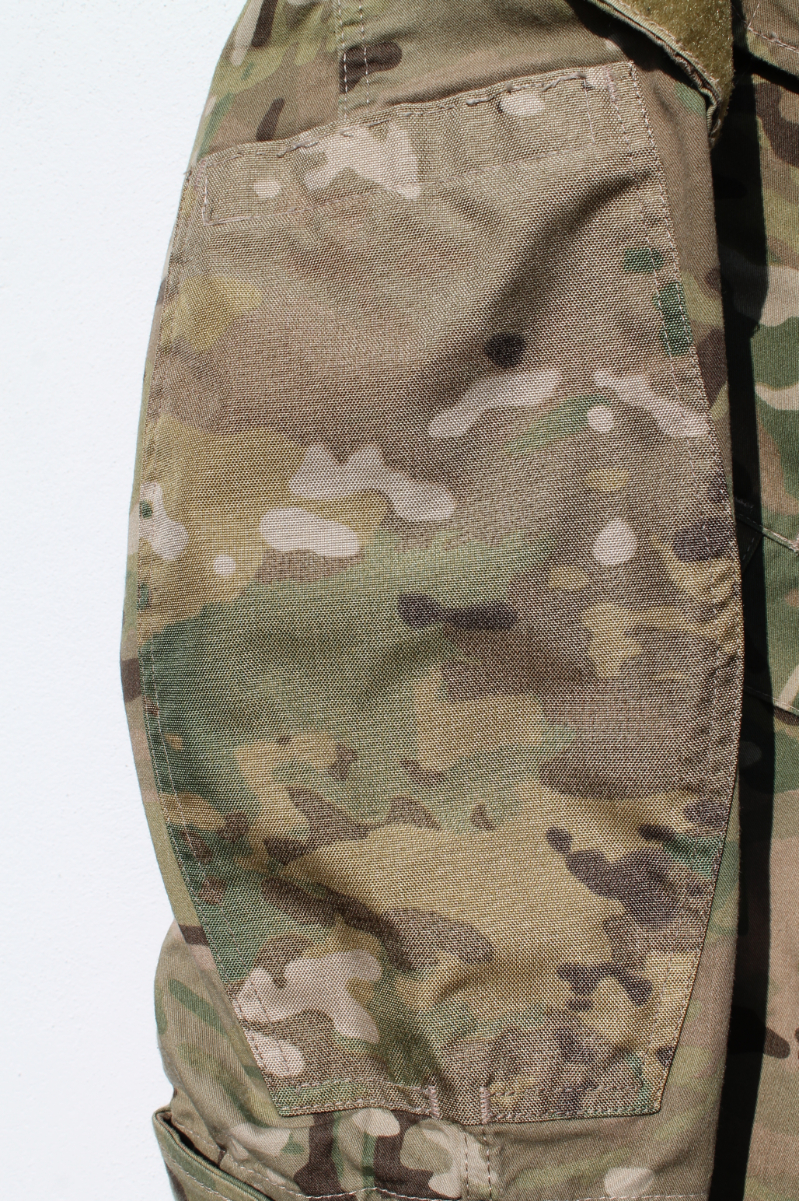 As seen throughout the Gen 1 field and combat sets, some key areas are constructed with cordura rather than NYCO for abrasion resistance, in this case the elbow pad pocket.  Not a feature that carried forward in to any future Crye apparel.  This early Multicam cordura is also as strange looking as the image depicts it to be and the pattern isn’t particularly faithfully recreated when compared to the NYCO. 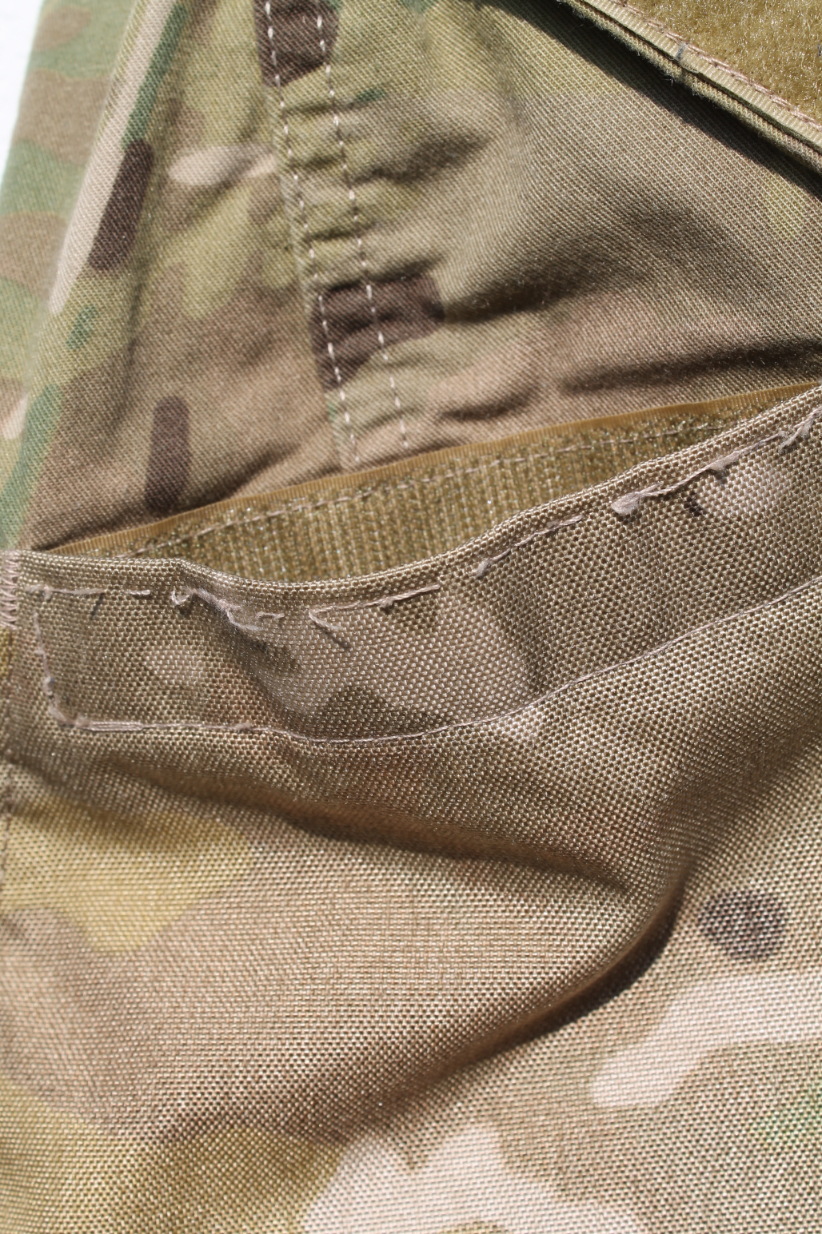 On both field and combat G3 shirts the elbow pads are loaded down at the cuff end of the pocket, but here on the Gen 1s (also on G2s) the loading is from the top/shoulder end.  Note that time has not been kind to the stitching here though the shirt overall does not seem to have been through a great deal of use. 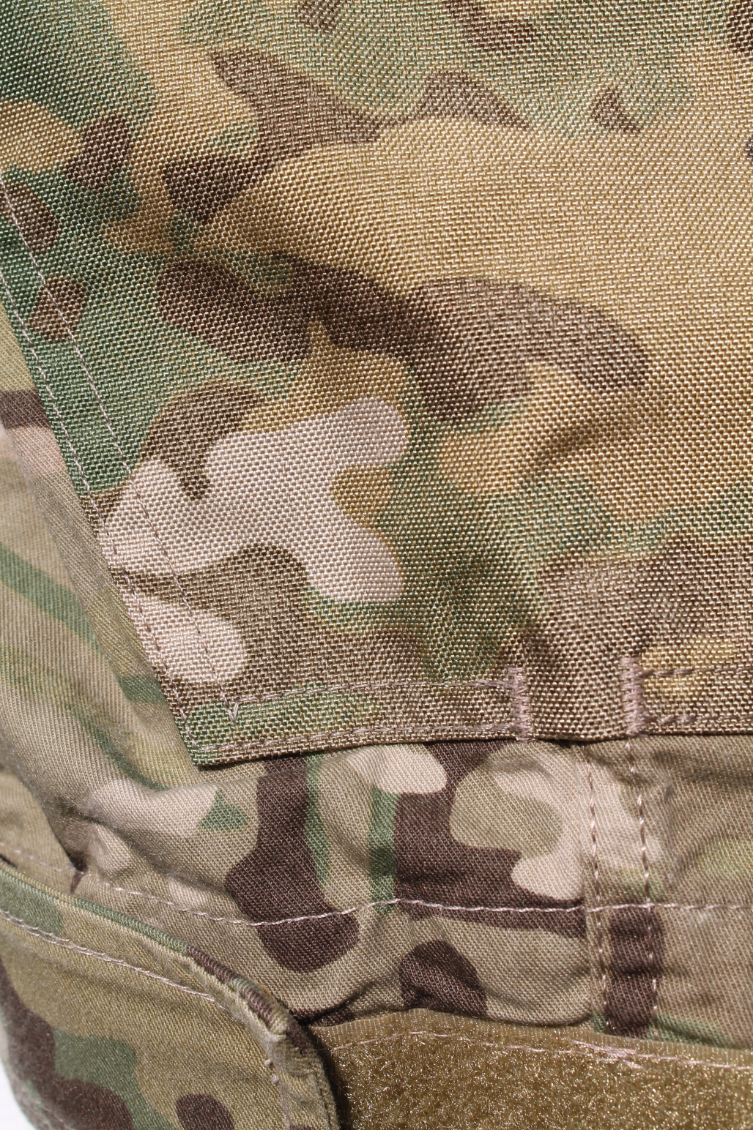 I would presume this is a drainage opening for the elbow pad pocket here at the bottom of said pocket, given that it is a large trough of waterproof cordura that could potentially hold a fair volume. 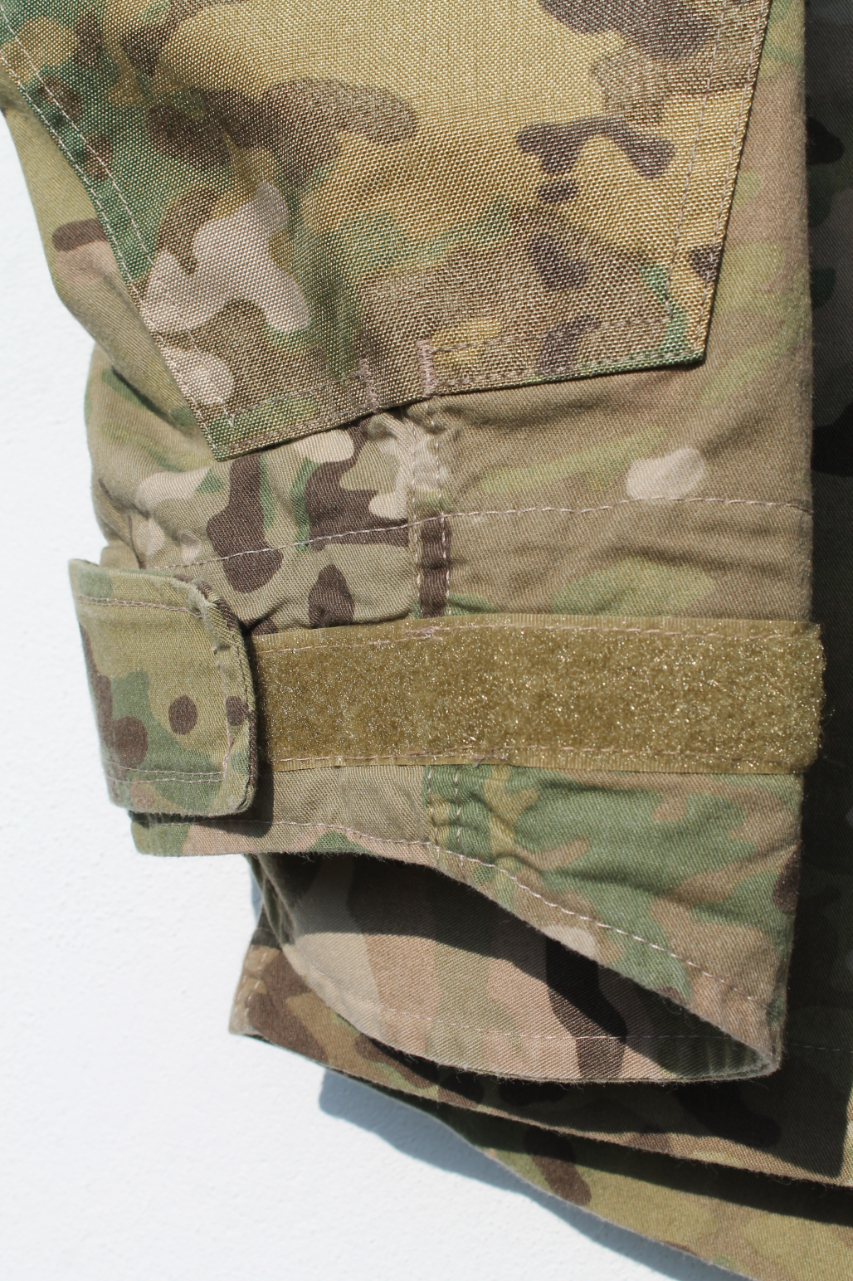 Cuffs on the G1 shirts extend slightly past their adjustment points on the inside in order to cover up any potential gaps between the wearers’ gloves and sleeves in that area. 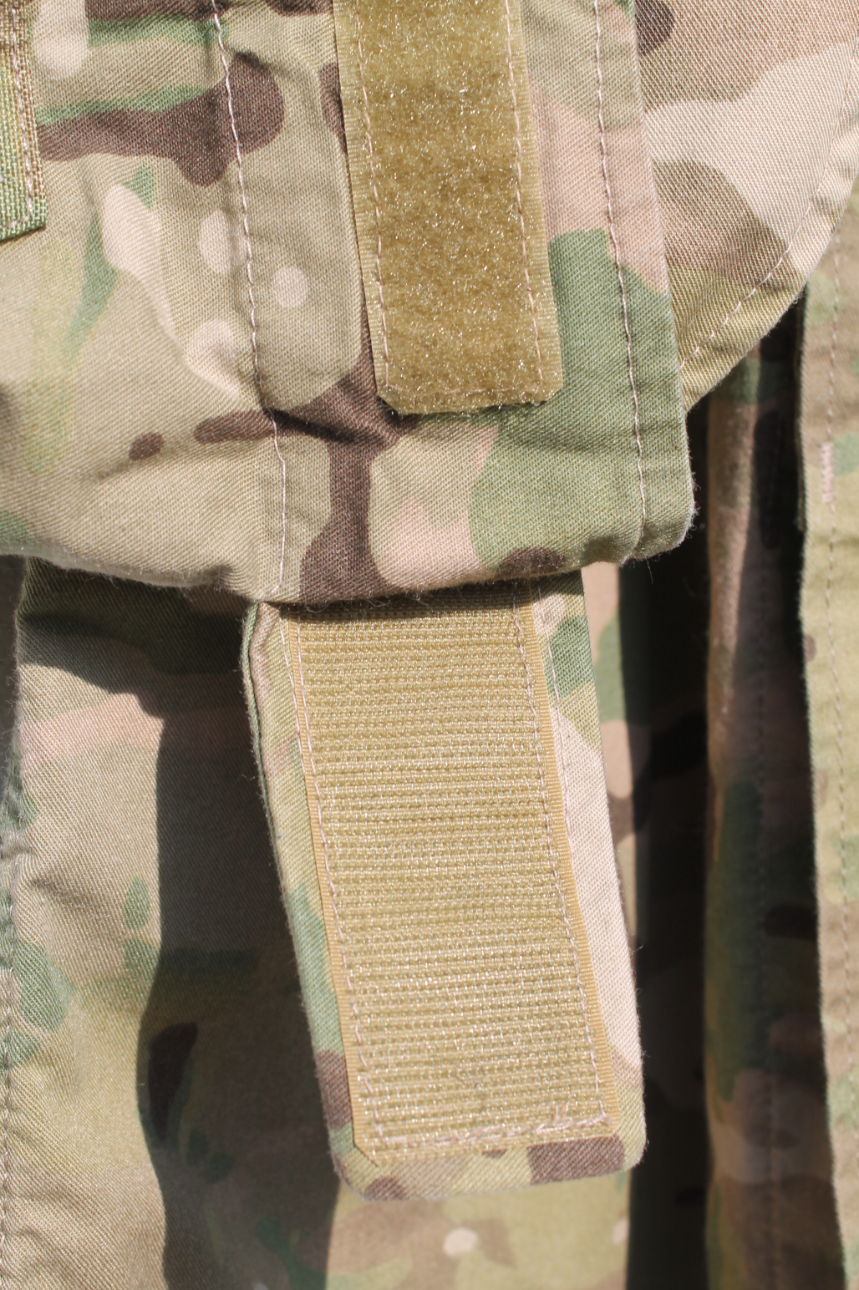 Adjustment for the cuffs is a typical velcro tab setup, although the hook on the tab is a good 0.5″ wider than the loop on the sleeve which is unique to the Gen 1s. 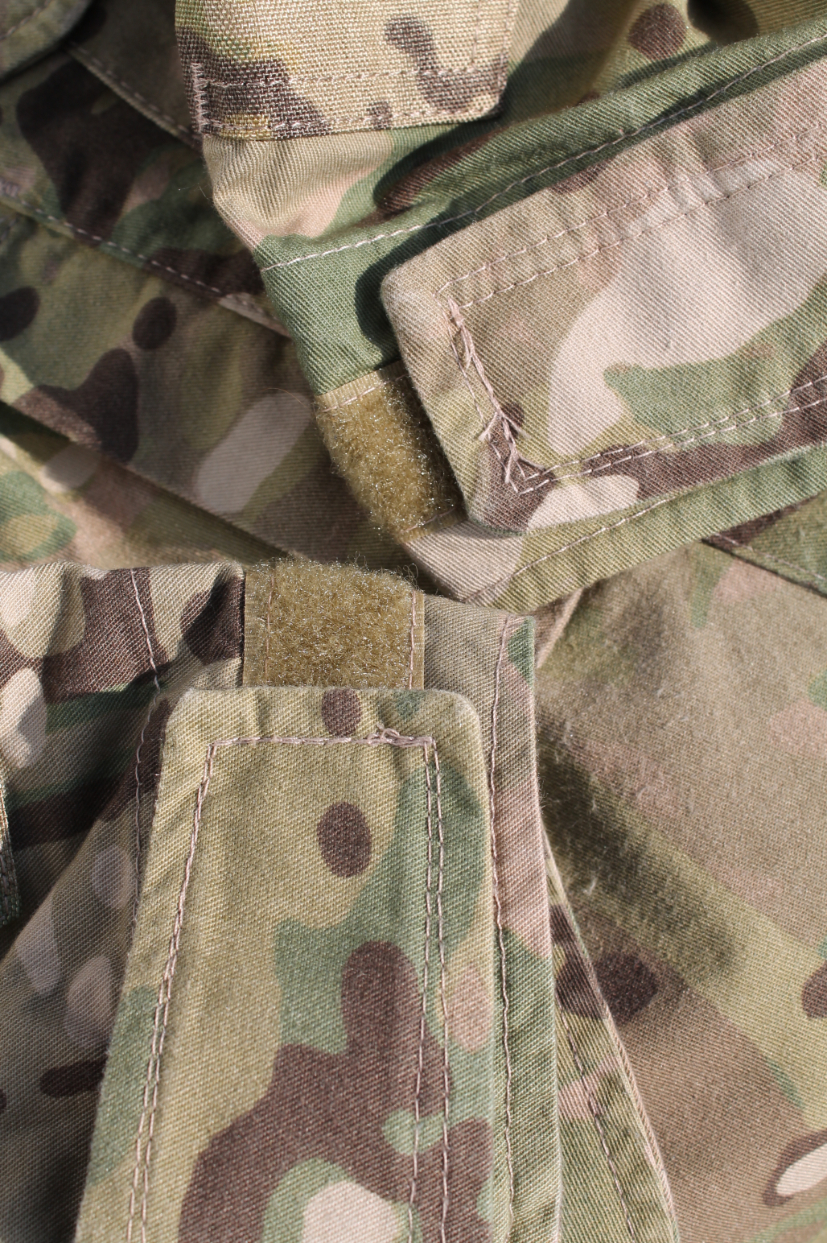 The worst sew work I have seen on any CP products have been on my Gen 1 item, an example of which is shown here on the cuff adjustment tabs.  As you can see the distances between the stitch lines vary significantly both within each tab and between the two tabs on each sleeve.

Interestingly, despite being the smallest departure from the norm at the time of manufacture, the Gen 1 field shirt also carries the most DNA forward in to the current production G4 equivalent item when compared to the other items from the G1 lineup.  In fact the field shirts in Generations 2 and 3 are barely any different from this shirt in most respects.  The twill fabric is not ideal and the cordura elbows are a little overkill, but those 2 minor aspects aside, this is still a really solid uniform shirt by 2022 standards and it has an awful lot in common with the OCP ACUs that are current standard issue to millions of personnel in the US military.