Initially I was uncertain on whether I’d cover all the features on this older generation shell from Crye, but I’ll be featuring the Fieldshell 2 here fairly soon and there are quite a few differences and updates so I think this post will make for a handy comparison at the least.

Working from the top, there’s a collar of fairly standard height lined with what appears to be the same material to what you will now find inside the waistband of the G4 combat trousers.  If memory serves it’s a polyester fleece type material, though it’s a very thin one, doesn’t insulate a great deal and transports sweat away pretty well; a good buffer against sling and strap chaffing.  The main zip is a full-length, YKK vislon (chunky plastic teeth) with coverage on the outside and a storm flap inside.

Pockets on the torso include a napoleon type on the right side of the wearer’s chest and 2 standard types on the abdomen in the usual places.  All are internally mounted and closed with coil zips which are again covered up so they’re pretty hard to spot in a front-on photo.

Sleeve pockets are externally mounted with zips that are affixed away from the sleeve and facing towards the wearer, just like the arm pockets on the G1 combat shirt.  There are baffles present for expansion along the rearwards edges.  The loop fields are split just like the G3 combat shirt.

Cuffs can be closed up with hook and loop using adjustment tabs that are father conspicuous in being some of the only visible parts of the jacket that aren’t colour matched to any degree. 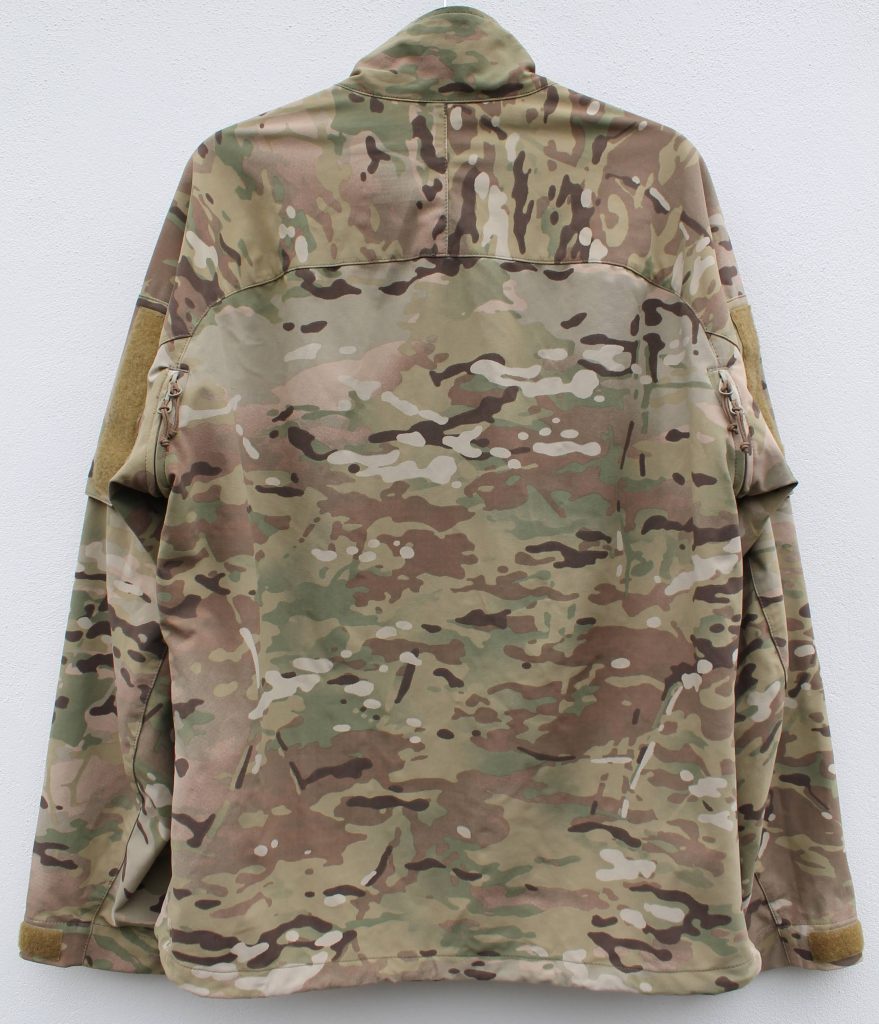 Pit zips are present though not easily spotted from the front as they are also covered by extensions of the main fabric of the jacket, just like the main zip and all the pockets.  Unlike every other jacket I own they run under the arm from front to back, rather than traversing from the torso and running across the armpit and back down the tricep area. 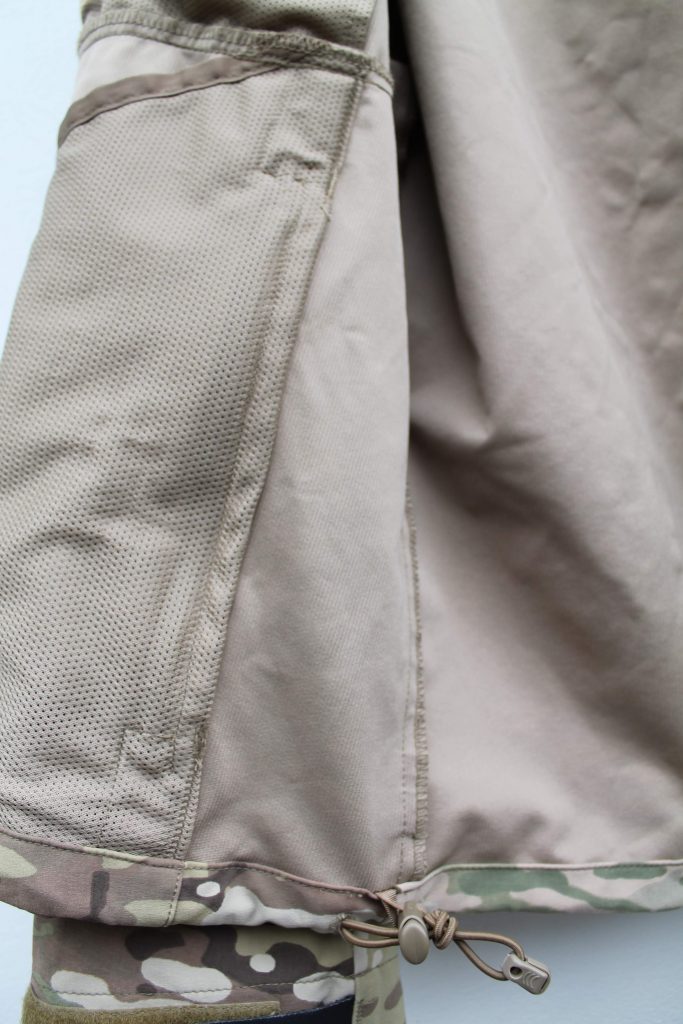 All of the actual internal fabric that makes up the pockets and holds your stored items is a mesh, as you will often see on quality softshell jackets.  This allows the pockets zips to double up as additional venting options.

The bottom hem of the Fieldshell can be tightened with built-in elastic cord that is adjustable at the 3 and 9 o/clock via cord-locs that are mounted internally with edging tape loops.  This is an area of the design that Crye changed quite a bit with the Fieldshell 2. 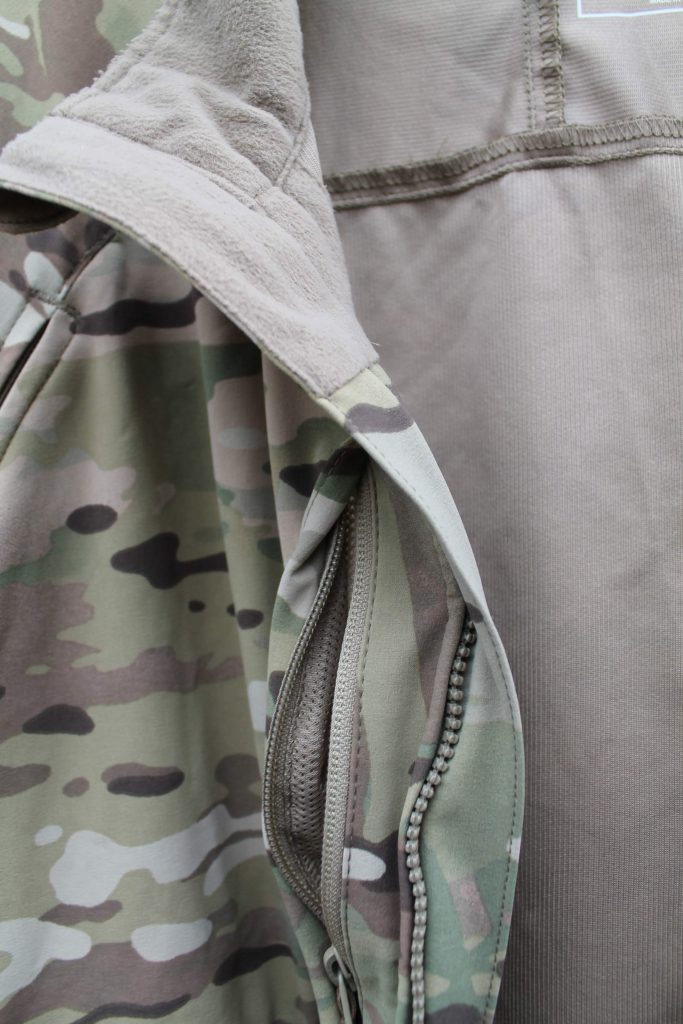 Above is a close-up on the fleece inside the collar, the internal storm flap and the zips on both the main closure and the single chest pocket. 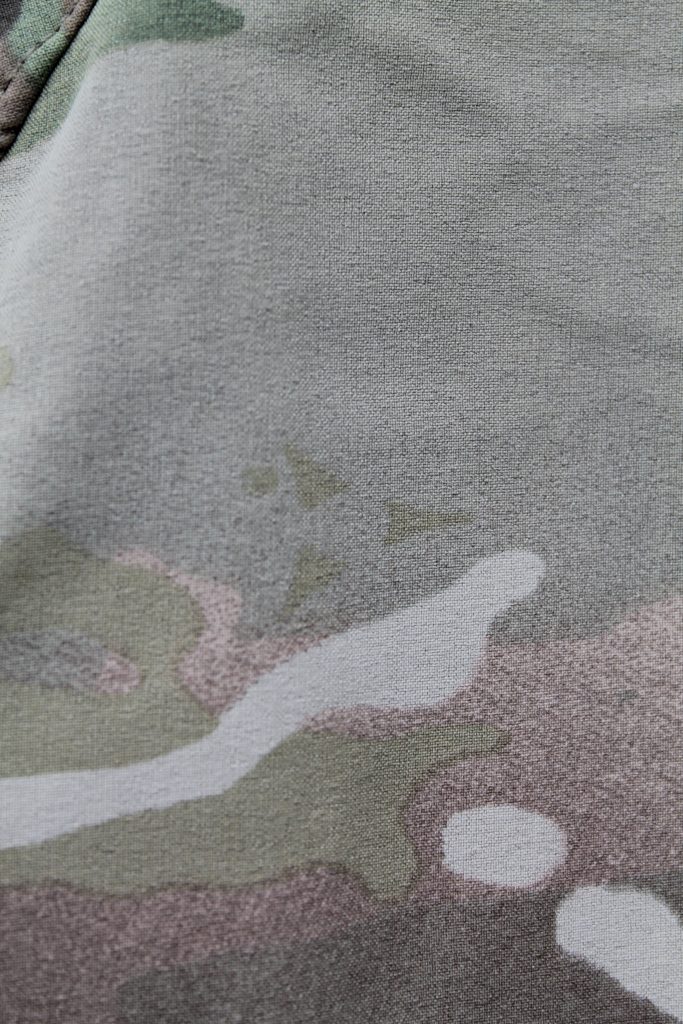 Even to this day, every piece of official Multicam fabric I have seen printed still contains the origin Crye Associates triangular logo that preceded the current circular Crye Precision logo.  This includes all the cotton blends and softshell for uniforms as well as cordura for load-bearing gear and I would bet it also covers the entire range of dozens of different fabrics that are sold by the Multicam company itself. 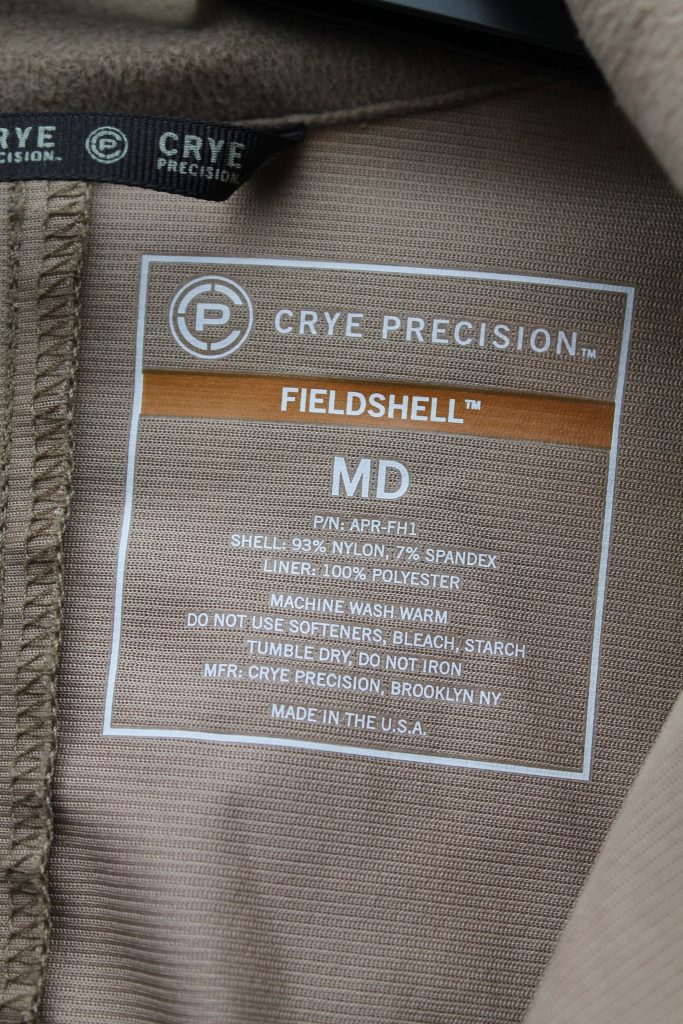 The Crye website only describes the primary fabric of the fieldshell as a “4 way stretch laminate with moisture wicking knit interior and Nano STX treatment” so I don’t know much more than that.  It could be a variant of Tweave from durastretch, however it is definitely different stuff to the Arc’teryx LEAF Combat jackets and the stretch panels in Crye G3 Combat Pants that use Tweave.  The end result though is very similar to any other quality softshell, such as the Arc Combat jacket, the PCU L5 jacket and many others in the same sort of price range which are aimed at the same end user market.

As with those other similar jackets the Fieldshell is a fairly minimalist, relatively light and slimline garment that packs down nicely.  Jackets like this are not intended to replace a feature laden smock with tons of large pockets, hoods and drawstrings and other widgets all over the place.  It does what it is supposed to do very well.