A few years ago I came to a conclusion that I’m sure a good portion of people won’t agree with right now:  UCP, ABU Tiger and NWU1 will be THE hot camo patterns some time within the next few years.  Certainly within the next decade. Imagine the meme from Zoolander 2 here.

For me, the FirstSpear Strandhogg is one of the very best plate carriers on the market and if you follow the social media links in the top right corner of this site you can find a couple of older videos on YouTube where I discuss the features of the carrier in detail, including (essentially) this current production version with the Overlap Cummerbund.  Hence I won’t be going in to the details of the Strandhogg here, mostly this post is about covering the lesser seen variant of said vest in USAF ABU Digital Tiger Stripe.

While they were never offered commercially, a reasonable quantity of these appeared for sale online in entirely unused condition about 3 years ago and for well under half the usual commercial price of a Strandhogg.  Whether they were surplussed by the USAF or the manufacturer I am unfortunately unaware.  Initially I was unsure myself even at the bargain price, but luckily they didn’t prove popular and stayed in stock long enough for me to realise that PCs as good as the Strandhogg in patterns as wacky as this just aren’t something you come across everyday.  Quite the opposite in fact.

Front view, fresh out of the box.  This is the MBAV cut rather than the more common SAPI, hence the very squared off front plate bag. 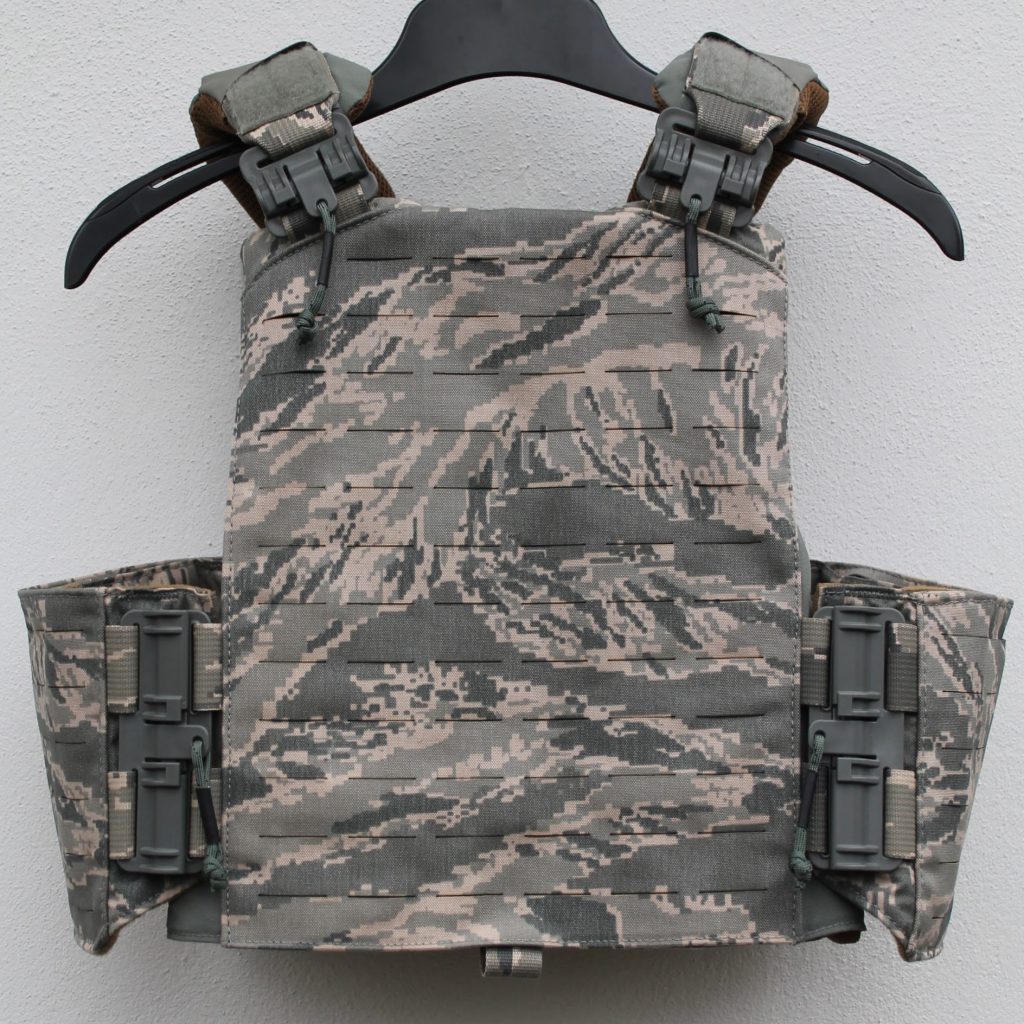 Rear view, again entirely slick.  This variant was likely made before the adoption of the Crye OEM’d metal components that attach the shoulder straps to the tops of the rear plate bags, although it their omission could also potentially have just been a requirement for this specific acquisition contract. 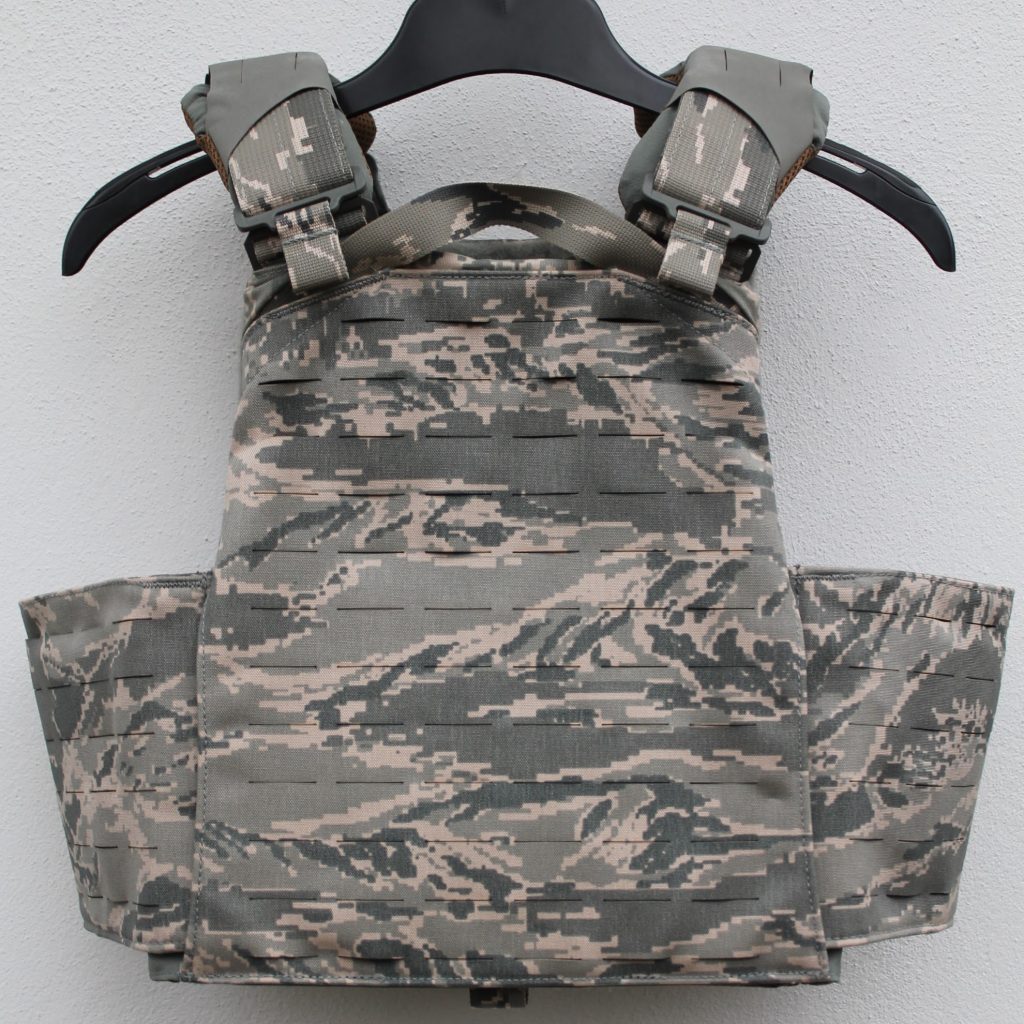 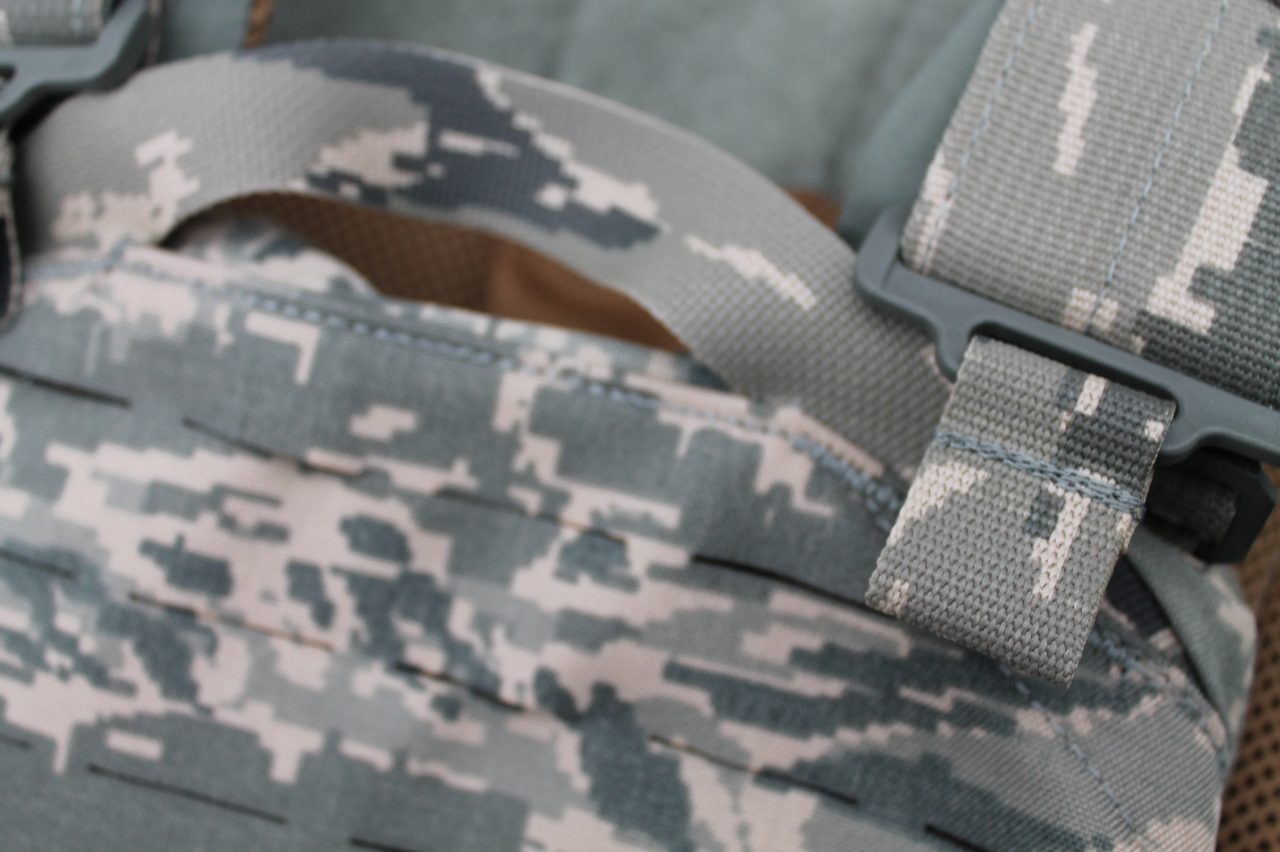 Above we see the pattern matched 1″ and 2″ webbing used for these plate carriers, below the specific Foliage Green colouring of the FS Tubes with an interesting FG paracord that features small hints of black in the weave rather than the far more common single colour 550.  Securing the 4″ Tubes is the same 2″ ABU Tiger patterned webbing as used for the shoulder straps. 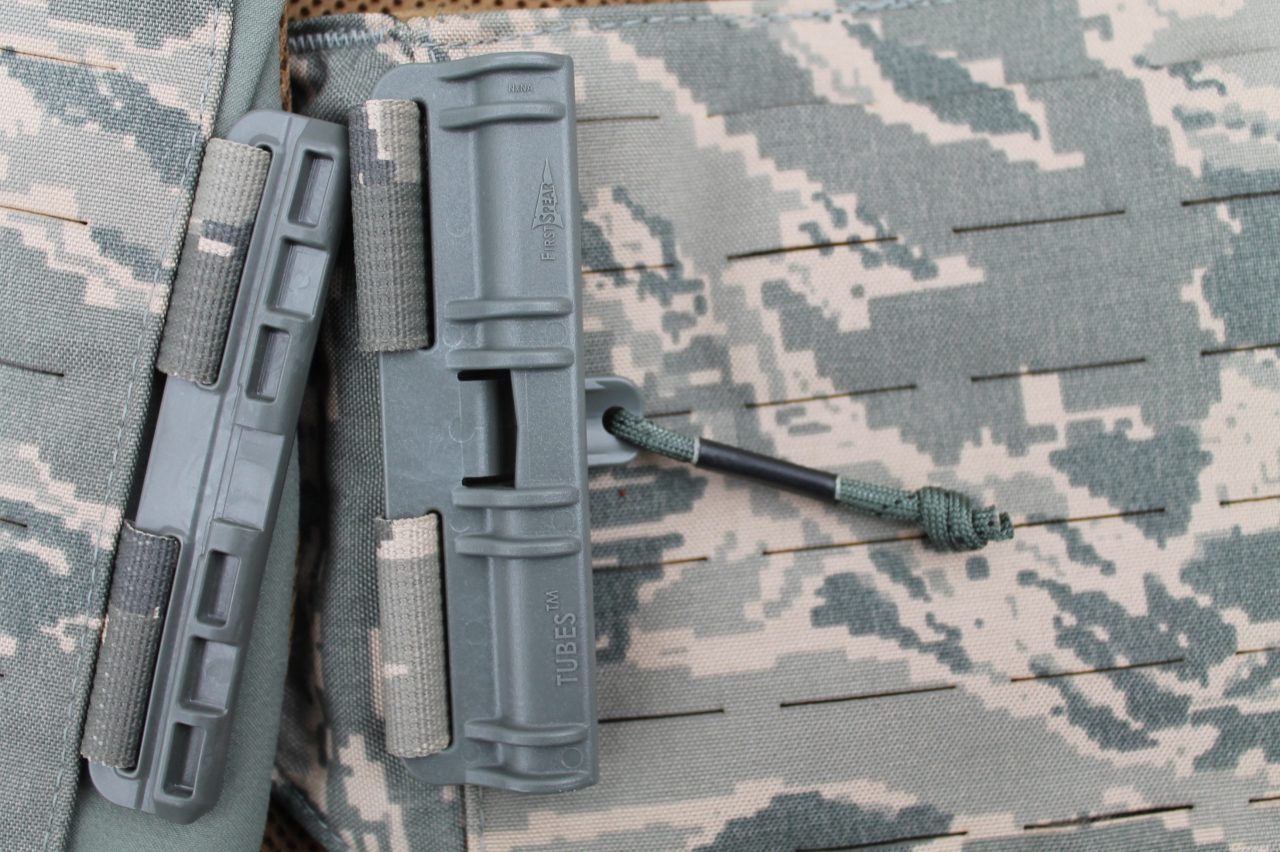 Label wise, there’s no significant variance here that I can see, despite the unusual nature of the item in question. 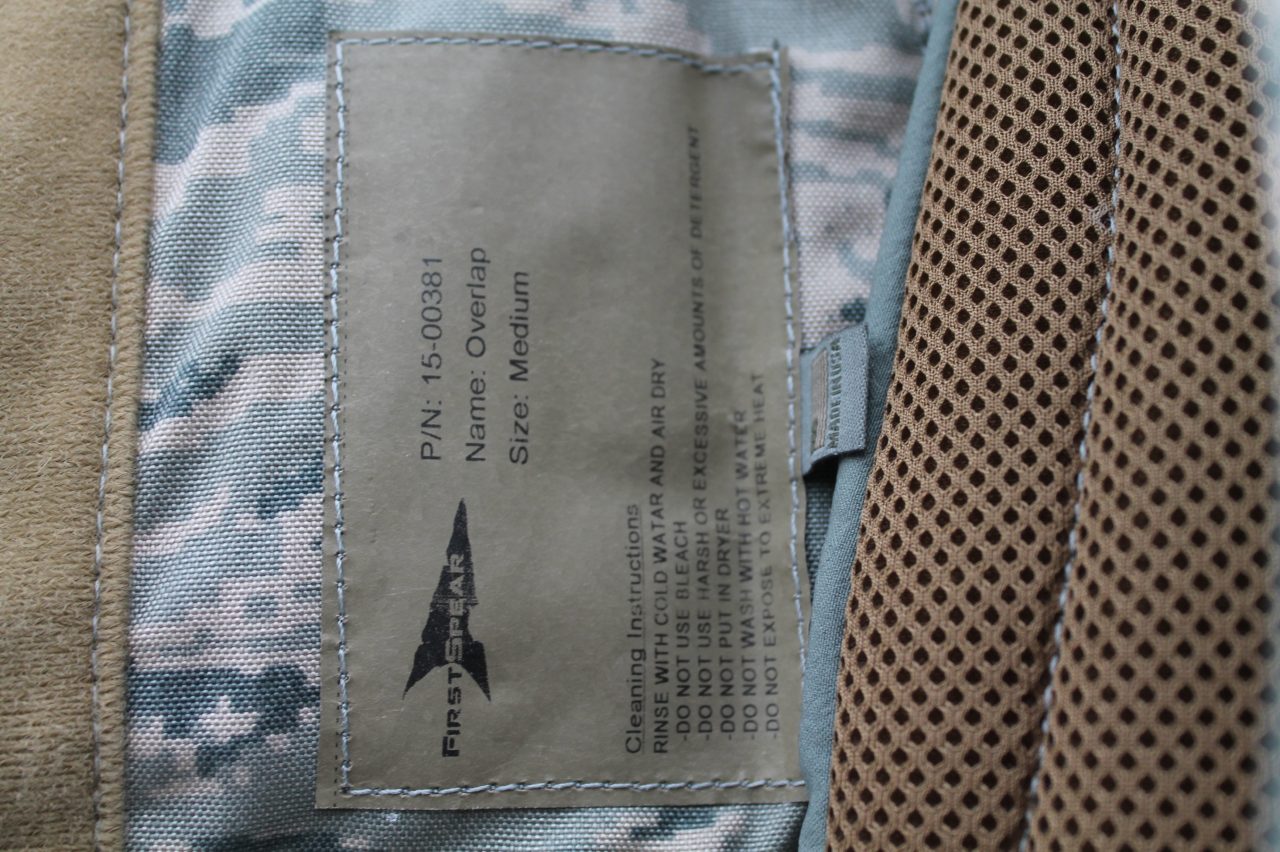 Flat grey elastic here provides support for the armour in terms of proper positioning and a divider between the soft inserts and hard plates.  Again the set of labels inside the front plate bag here is standard FS stuff. 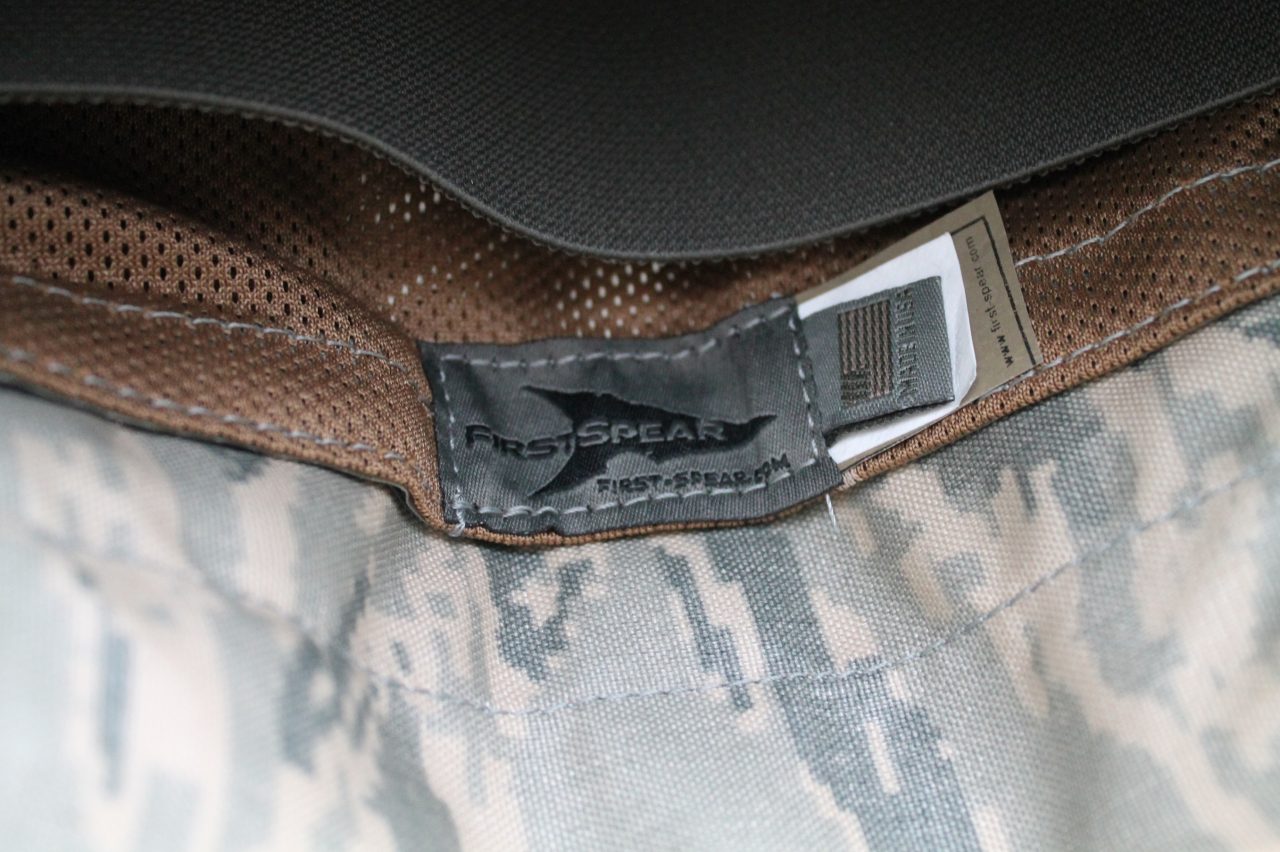 At the time of writing I’ve not managed to find any more than this one picture of the ABU Tiger Strandhogg outside of my own photography and FirstSpear’s social media accounts.  I would be willing to bet that 99.9% of the people issued these didn’t really know what they were wearing in terms of the unusual nature of the vest. 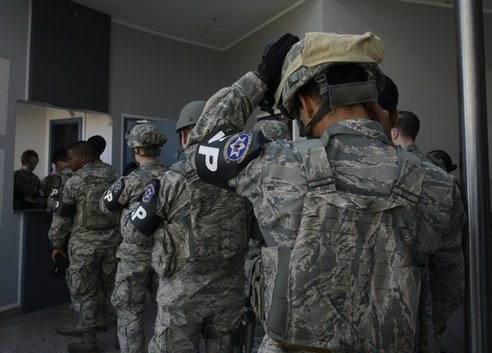 The image above shows USAF Security Forces personnel lining up all wearing the Airman Battle Uniform with their camo matching FirstSpear plate carriers.  The RAF doesn’t have a trade/job role that is exactly equivalent, but the USAF Sec Forces were evolved from US air force military police and now represent more of a ground defence type of unit, largely employed in guarding missiles sites, airfields etc.  Though they do employ dog handlers similar to a more conventional force of military police.

Below we see USAF personnel carrying out CQB/breaching training in an exercise alongside German and (probably) Dutch counterparts.  One airman assisting the cutter is wearing an RG Strandhogg, while another equipped with Simunition M4 and full SimFX PPE, to include the ABU Tiger strandhogg, stacks up/provides cover. 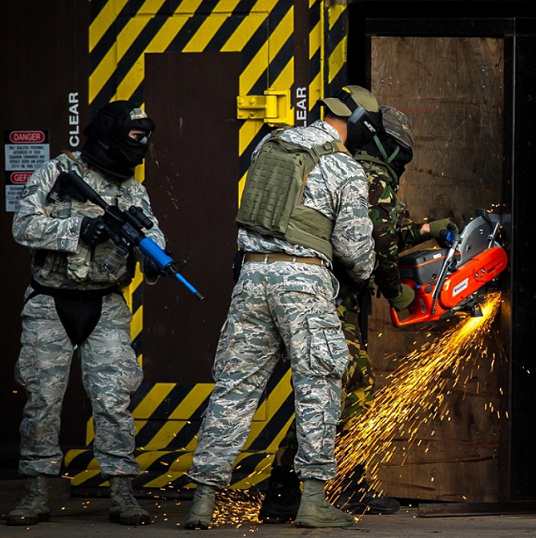 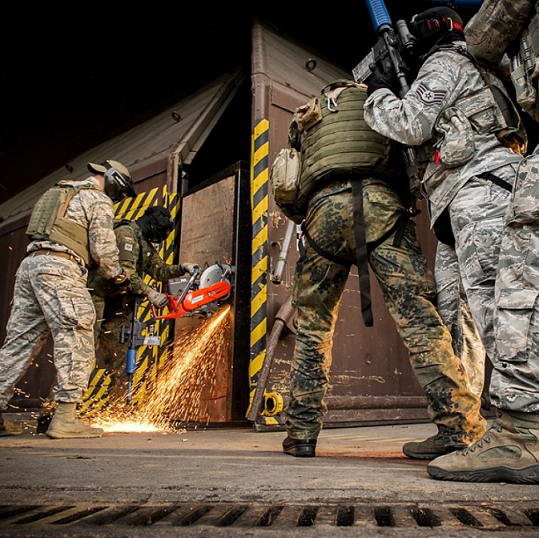 When FS first created their 6/12 line of gear the norms in the realm of tactical kit manufacturers were somewhat different and varieties in colours and camos were much smaller than they often are now, not to mention the fact that the 6/12 fabric  used is a laminate of cordura and velcro fabrics that can only viably be produced in very large minimum quantities, so the range of patterns available for the likes of the Strandhogg and AAC has always been narrower than with some smaller brands that use simpler materials.

To my mind an extremely interesting and collectible version of a world class plate carrier, despite this specific variant having no gucci special forces provenance and being in a camo that a lot of people will no doubt despise.