I had a pretty nice delivery right before I came out on this deployment, but when I say right before, I mean I collected it from the post room the afternoon before I was scheduled to leave at 3 a.m. the following morning.  So unfortunately all I could do is take some rushed pictures in my room and lacked any opportunity to really check out this new apparel.  However, this is of course all added to the line up and some of it will be covered here in more detail later on.

A good example of brand new Multicam NYCO vs well faded multicam NYCO there, even if the lighting exaggerates it somewhat.  Picked up the Crye AC field shirt for only a couple of notes, so even though I later decided it wouldn’t stay in the collection and will be sold (decided before it even arrived actually), it’s a good example of how anyone can set themselves up with high-end kit from a brand that’s rarely ever beaten on quality or design.  More importantly, you can do so with less cash than it takes to buy ‘similar’ styled items from cheap, Chinese clone brands that use dubious knock-off fabrics.  It’s all about shopping around and buying smart at the end of the day.  At least as smartly as one can when wasting their money away on unnecessarily expensive gear that they most definitely do not need. 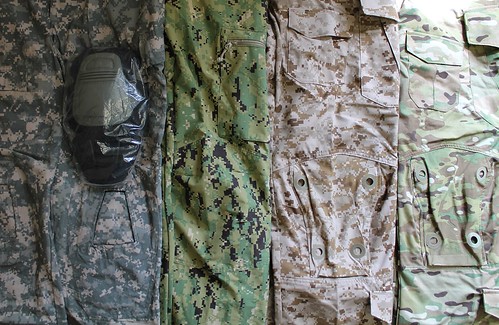 Since deciding that it wasn’t really working to split my expendable funds between the apparel, nylon gear, other miscellaneous kit and my airsoft guns (plus saving for another potential SHOT trip), focusing purely on the clothing side of things has been quite fun and interesting this year.  It’s the most enjoyable part of gear collecting for me personally when it comes to the online hunting.  Unlike say, helmets, backpacks or plate carriers, you can get a lot more variety in terms of brands and patterns for less money and it takes up a lot less storage space comparatively speaking.  That latter point being one of my main constraints on what I can actually own these days, being a lowly barrack block dweller.

One thing I’ve been striving for is to try out as many brands as I possibly can, in order to get a handle on the sorts of designs, materials and overall quality some of the bigger names are putting out.  I see a lot of folks out there buying nothing but Crye, which is great and yes their apparel is up there with the very best, but that’s also not generating any new information.  I just had a couple of CP items in the locker until fairly recently as I’ve been sort-of deliberately avoiding the stuff, the overwhemling majority of the collection was from other brands.  I’ve never felt there’s a lot of merit in talking/writing about Crye kit online given how much information there is already out there.  Whereas, at the other end of the spectrum, there are plenty of other brands around manufacturing solid apparel from proven materials with good designs in them, yet they’re just not getting any exposure because anything other than Crye is somehow ‘not the best’ and doesn’t generate the same number of likes on Instagram.  Not saying CP products aren’t excellent and as I say, I’ve picked up a fair few more pieces from them lately, but it’s the searching I like most about getting new gear, tracking down something good from a company very few have heard of before.