I can’t recall precisely why I originally purchased the HSP entry in to the micro chest rig/modular placard/chassis market.  I think back in late 2018 it was partly through having a different viewpoint on the brand to the one I currently have combined with wanting to compare it to my Spiritus Mk3s.

I sold on the X harness and back strap a long time ago as surplus to requirements so I’ll just give a few of my thoughts on the placard here.  The harness is the definition of ‘fine’ and built perfectly well enough, but is also perhaps one of the most basic and unoriginal pieces of kit on the market.  Releasing that design in the late 2010s puts it somewhere in the realm of the plastic sights on a Glock, a placeholder.  This whole issue isn’t helped by the fact you are forced to buy the associated harness and back strap rather than being able to pick any of the dozens of others that are available and compatible with the 1″ buckles on the rig. 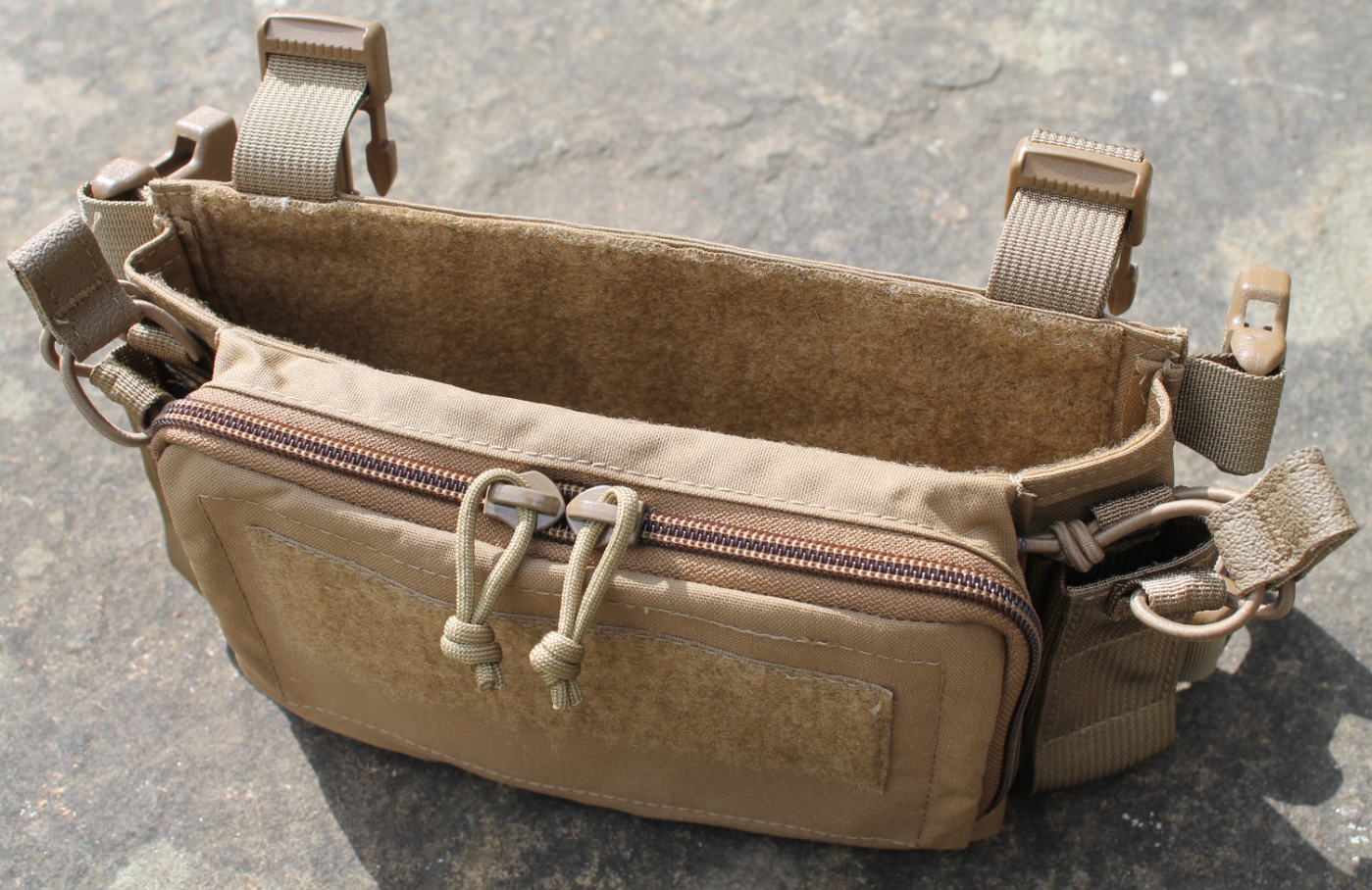 What makes the most sense about this micro rig is the choices of which features are pre-sewn in.  An awful lot of people put at least a half flap if  not a zip insert or full flap in/on the front of a Spiritus Mk3/4 and I’ve seen plenty of people wishing they had PALS or small pouches on the sides too.  The main appeal to all such products of course is changing from 556, to, AK, to 308, to SMG mags quickly with just a simple insert swap in the back and that feature is copied in to the D3.  So if that combo of a loop-lined cell for modular mag inserts combined with the sewn in features happens to be the setup you want and you’re damn sure you’re never going to change, the Haley option is for you.

As always, anything that is permanently sewn in place is a little more compact and streamlined, slightly lighter and you can save a bit of money. 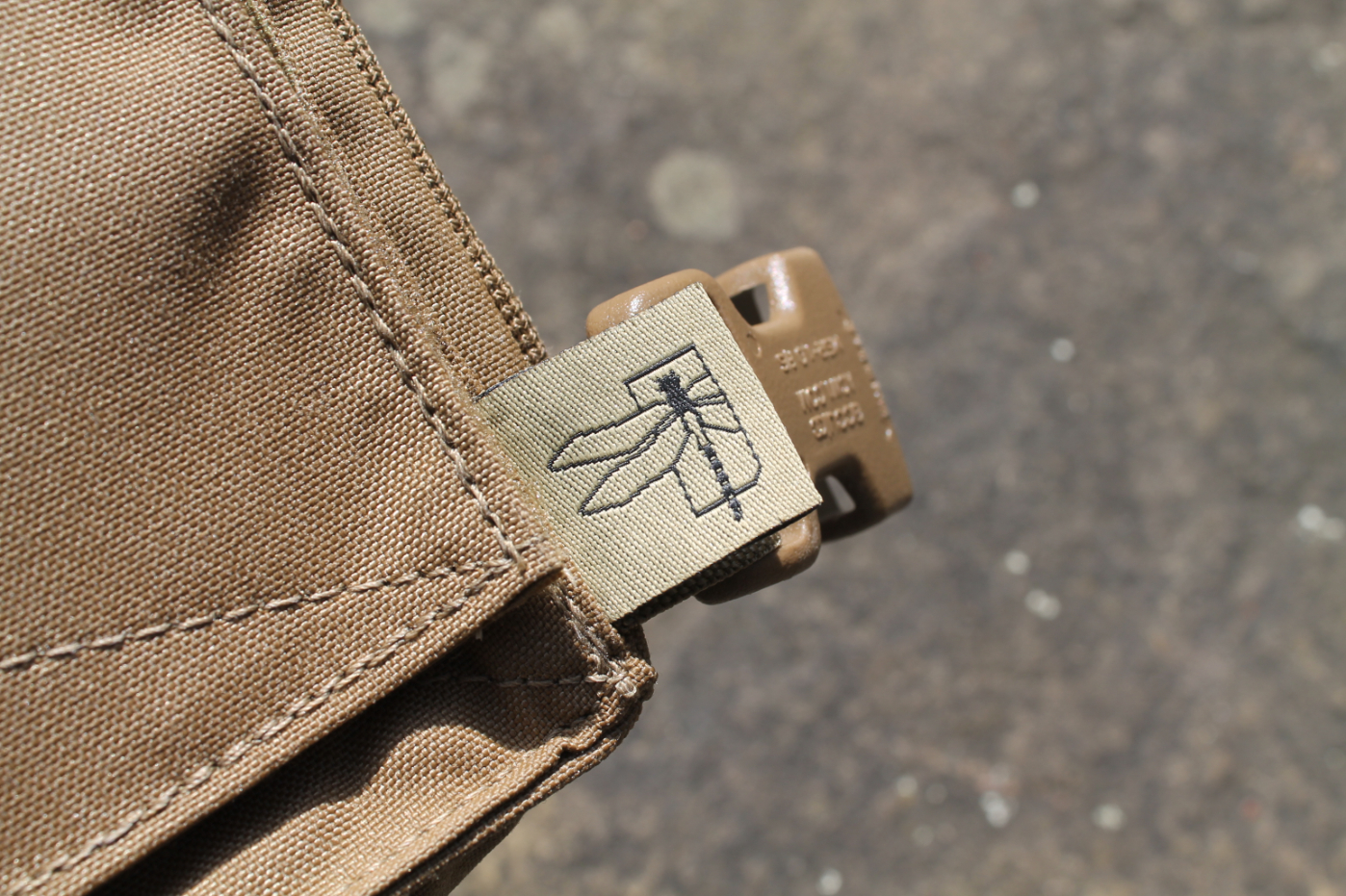 Unlike inside the HSP plate carrier, having the dragonfly logo here on a small tag won’t really have added significant totally unnecessary costs to the product for absolutely no practical benefit. 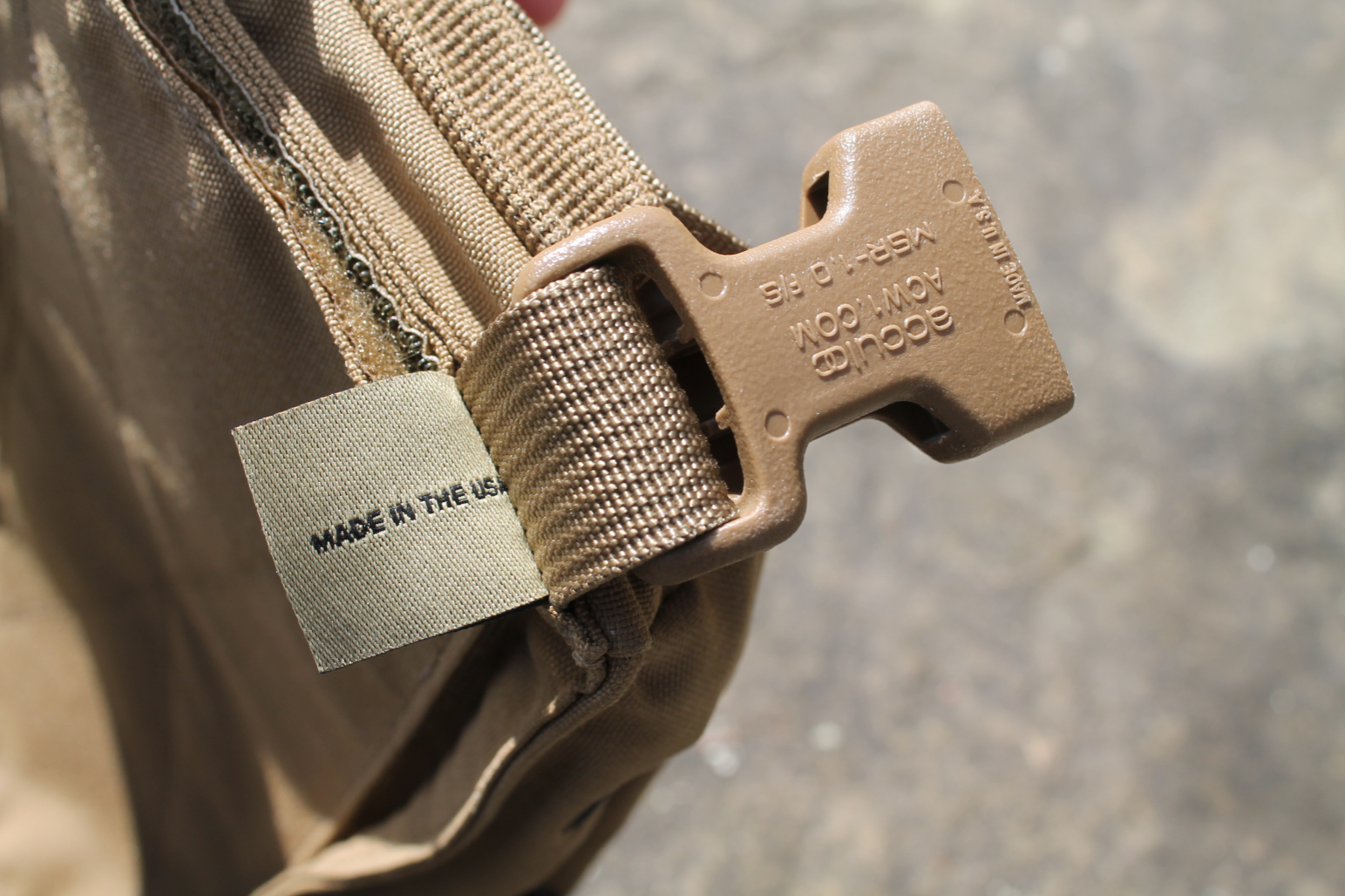 For a while I forgot this was on the other side of the brand label and wondered if these rigs were outsourced, given some of the materials are not the best ones available.  Who exactly the OEM is for HSP soft goods I don’t know.  While Extreme Gear Labs is certainly involved I’m not sure if they purely contribute to design or actually have a sewing facility themselves.  Possibly a sub-sub contractor arrangement, hard to say. 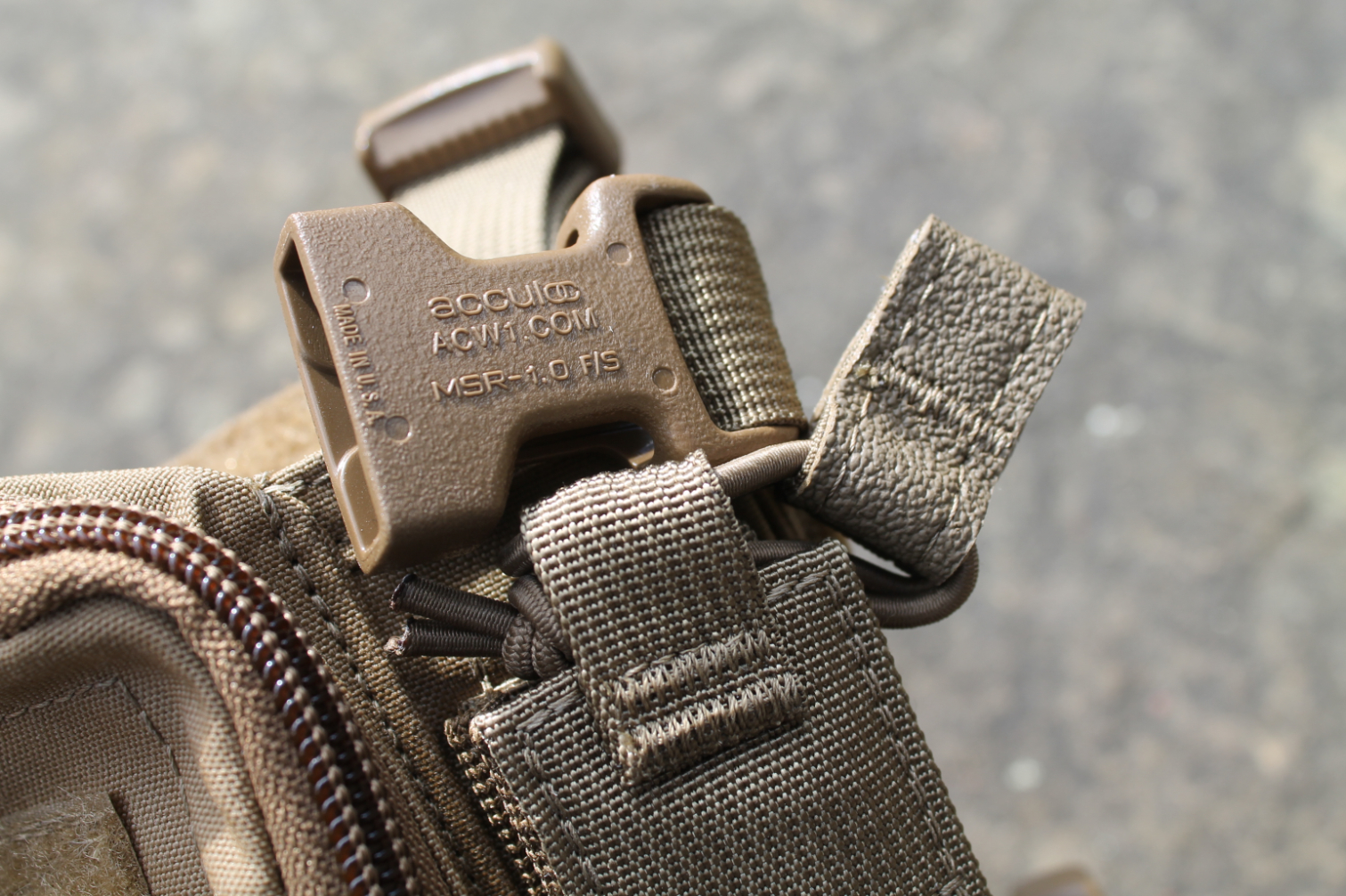 Rather than the ITW gold standard the plastic hardware is made by a company called ACW.  It’s not a brand I’m familiar with and I’d be willing to bet their prices might be slightly lower, but the honest truth is the SRBs don’t give me pause for concern in terms of their durability, at least from close examination.

On the other hand, the webbing used in various areas looks cheap, shiny and low grade compared to what you would usually expect from a company positioning themselves as a top end supplier of nylon goods.  On my CB example the side pouches are weirdly slippery, unusually shiny and a golden colour that’s nothing like standard CB cordura or the CB webbing other quality manufacturers use.  I expect it will be tough enough, but I think this is one of a few areas where a very slight corner was cut and if it wasn’t then I really don’t understand the design decision. 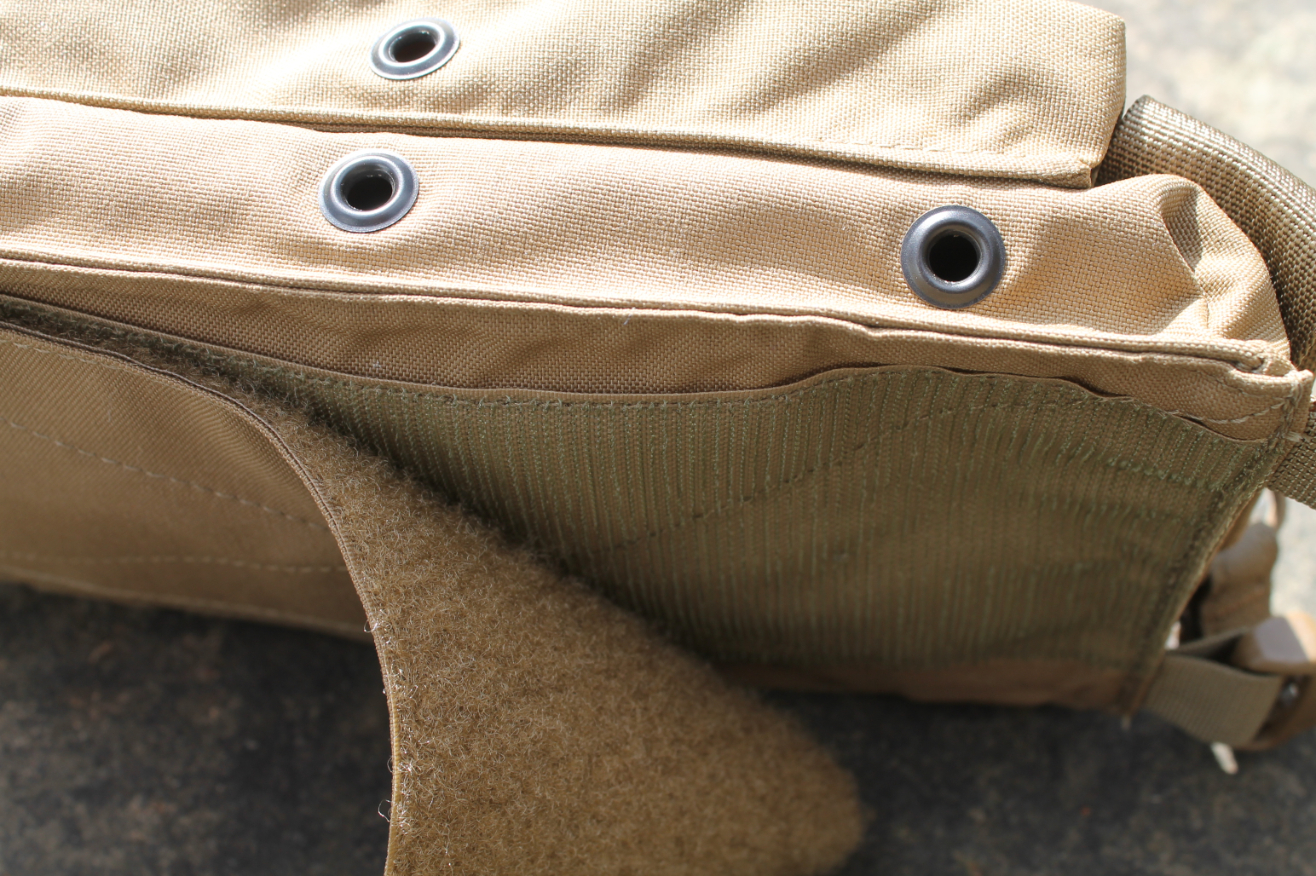 I am not sure if this may have been updated in more recent production runs, but my example of the D3CR-M only has 4″ of hook backing whereas Spiritus stepped up to 5″ on the Mk4 chassis then of course carried that on with the Mk5.  I am not personally aware of any time where more velcro adhesion to a PC or chest rig base is a bad thing.

Modern designs should really avoid metal parts wherever possible for many reasons and having this many metal grommets for drainage is quite excessive.  Just a couple of laser cut or button-holed drainage points would be plenty sufficient and just a better option all around. 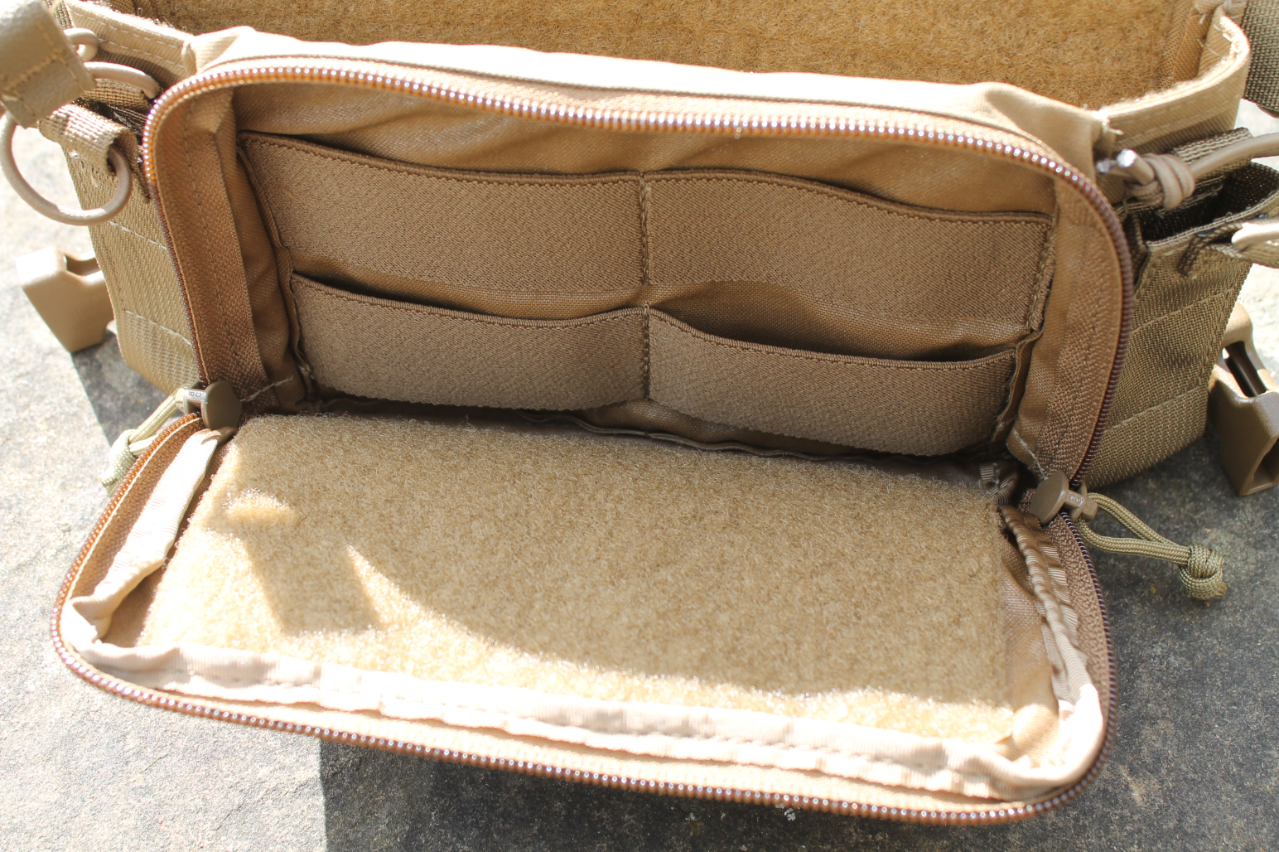 Going with a conventionally oriented (i.e. not reversed) zip for the admin pocket with paracord pulls is about the cheapest and most basic option that possibly could have been selected, while still actually being up to the task of military usage.  Inside the front admin pocket there’s some elastic loops which are fairly well laid out and don’t come up too close to the top edge, but the loop field on the outer face isn’t perhaps the optimal choice.

Event the HSP web store doesn’t show any potential inserts that the company wants to demonstrate being mounted on here.  You could fit a small, velcro mounted chem light or battery holder but that’s the most.  The pocket isn’t large enough in any dimension for anything more and the insert itself take up a bit of space which is already at a premium.  A plus side is that at least the pocket doesn’t zip all the way down at the sides so small object are better retained but it also doesn’t have a drawbridge facility so it’s not as useful for a map or phone. 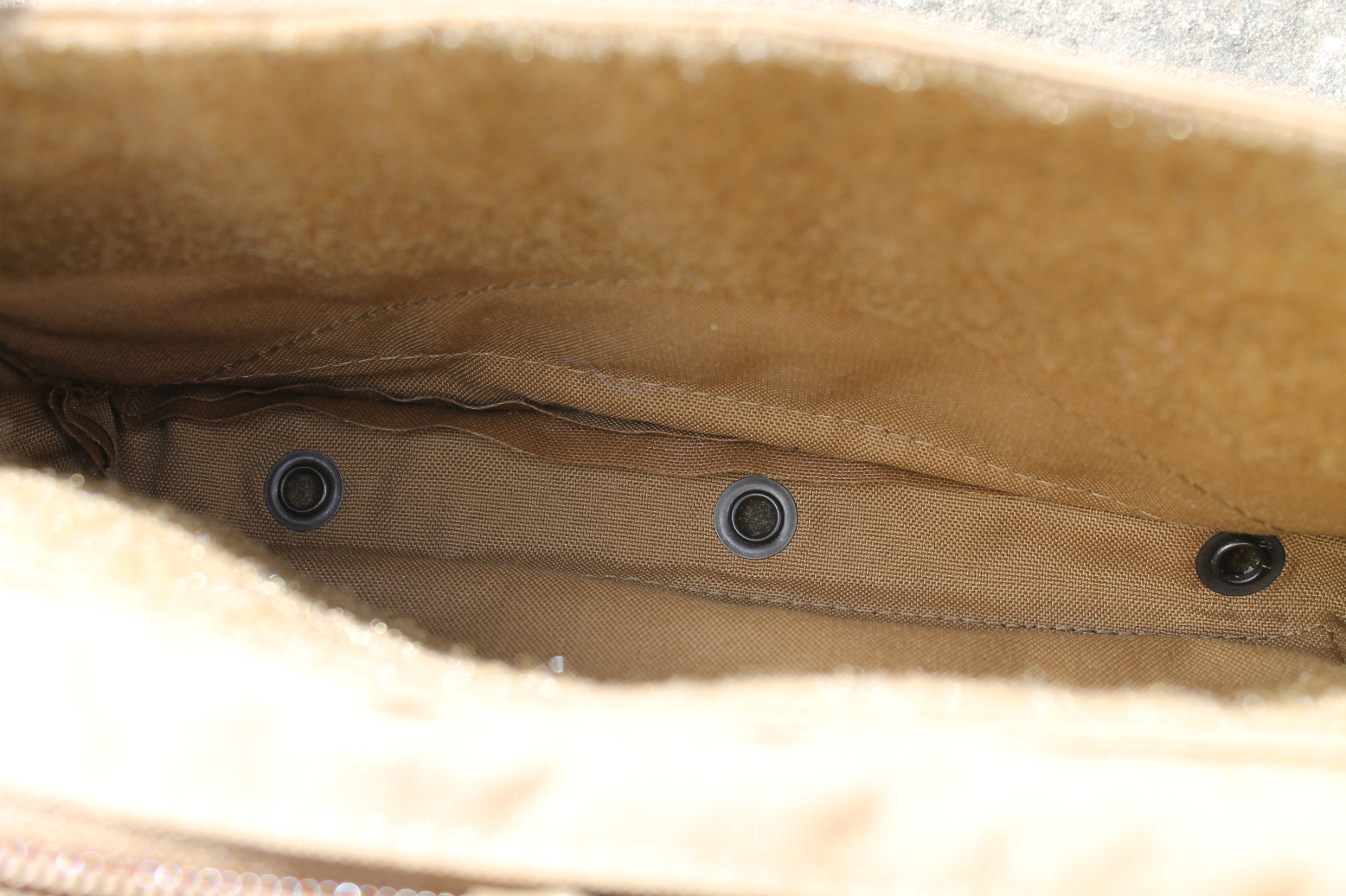 I often gauge overall quality of a piece of cordura gear based on how the edges of the fabric are dealt with, especially when the manufacturer can ‘get away’ with just ignoring those edges if they so choose due to them being covered – and HSP did choose to here.  This is one of those things that really doesn’t matter much in actual usage and won’t be of concern for the guys getting grimy with this rig, but in order to differentiate brands these days this is the level of detail you have to get down to.  If you turn a FirstSpear pouch inside-out for example you’ll find all these edges sealed up as it were with edging tape.

As a basic comparison, a Spiritus Mk4 with Fat Straps, Back Strap and a Zip insert costs roughly the same money, but I would rate the Spiritus package as generally better made.  There isn’t a lot in it, but the Spiritus does come out on top and of course it birthed the market for such products as we know it today.  If you can sell the harness and back strap for say $25 then the $150 you’ve paid for a modular mag placard, a rather small admin pouch and two pistol pouches works out about right roughly, but you then have no ability to change anything around.

The D3CR-M is just fine and works well if you want this config, but it’s not a clever innovation, it’s not manufactured with the cutting edge materials or methods and it lacks features compared to other placards on the market as of 2022.