Using this TYR Tactical, LLC Gunfighter-E as a jump off point, let us talk belts a little bit. Just as a priming note, from this point on I’ll be describing the depicted style as a simulated 3 row belt, or just simulated 3, since it basically does the job of 3 inches (vertically) of PALS space, despite only being a 2″ tall piece of gear.

First off, why choose the Tyr out of the dozens of options on the market for a belt that features 2 rows of half inch webbing with a 1 inch gap? Well first off bear in mind this was originally ordered nearly 2 years ago now so when I buy another belt of this type it may come from a different brand, however at that point there weren’t quite as many prime cut choices from the big names available. The two options that consistently came up in discussion were the Tyr Gunfighter and Ronin Tactics variant. Every drone and his dog was buying the Ronin which I personally believe is an overpriced piece of gear made by a company which has quite literally zero originality in its’ product design. Granted it is a long running debate as to the fact that there’s nothing new under the sun and especially so in the world of gear, which is somewhat true and almost every company copies some ideas in some form or another, but if your *entire* product line is seemingly comprised of intellectual theft you will not get any of my cash – end of story. That notion will probably rub some folks up the wrong way, but if you came here for niceties and appeasement of the popular brands/products instead of what I find to be the complete and raw truth, you made a bad decision. I think Ronin is great at marketing and social media… and that’s about it. 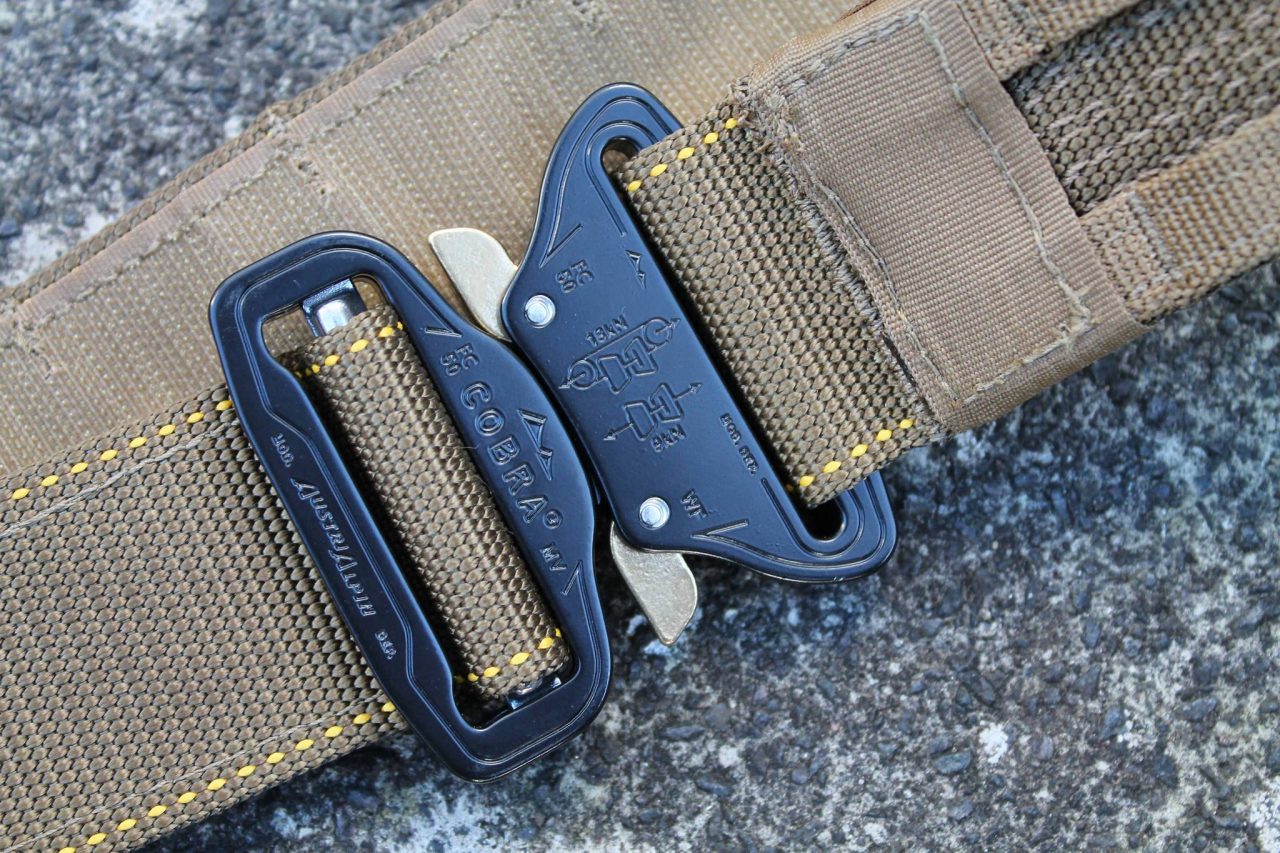 Obviously the materials the Tyr uses are more than up to the job, particularly reassuring is the main body of webbing being the same as some parachute harness straps I’ve worn, as well as the AUSTRIALPIN Cobra front and centre. If you want an example with regards the stitch work throughout I’d recommend taking a look at the sheer volume of thread in the zig-zag pattern to the right of the label and any of the bar-tacks that are visible. I’ve had traditional 3″ PALS belts in the past (and indeed plate carriers) where the bar-tacks in the PALS webbing could not take the strain applied over time by the tight MALICE clips on first generation HSGI TACOs. Even though those exact pouches are long out of production, I still judge any traditional webbing PALS (i.e. not laser cut) via an assessment of whether the tacks would hold up to mounting a legacy TACO over an extended period. If the strength is there to withstand that, the strength will be present for aggressive usage. The sewing on the grosgrain ribbon that is covering the cut ends of the webbing adjacent to the cobra buckle is at a low count per inch granted, however it is more of an aesthetic nicety than anything else and despite the appearance in the picture, is very much straight and level.

So yes it’s all built very nicely, the PALS is neatly in spec, the hook & loop interface you’d expect for a modern belt of this type is present and the spacer mesh ‘base belt’ that comes included is frankly a superb piece of design work. But absolutely nothing is perfect so what are the negatives? Primarily the design of the adjustment, whereby you are losing a good few columns of PALS in an area that will be quite crucial for a lot of people. That said, the disparity is not as drastic as first appearance would suggest and unless you need equipment mounted in front of your pistol on your weapon/strong side it is a simple matter of slightly offsetting the entire belt. It doesn’t take much of a shift to get your pistol mag pouches settled in the spot you’re likely to want to have them settled. Newer designs do facilitate adjustment in a better way and maybe an update would be a good move, however the Gunfighter design has been around a lot longer than many others and from what I’ve researched it did a fair amount in terms of growing the entire concept and popularity of simulated 3 row belts within the gear market. 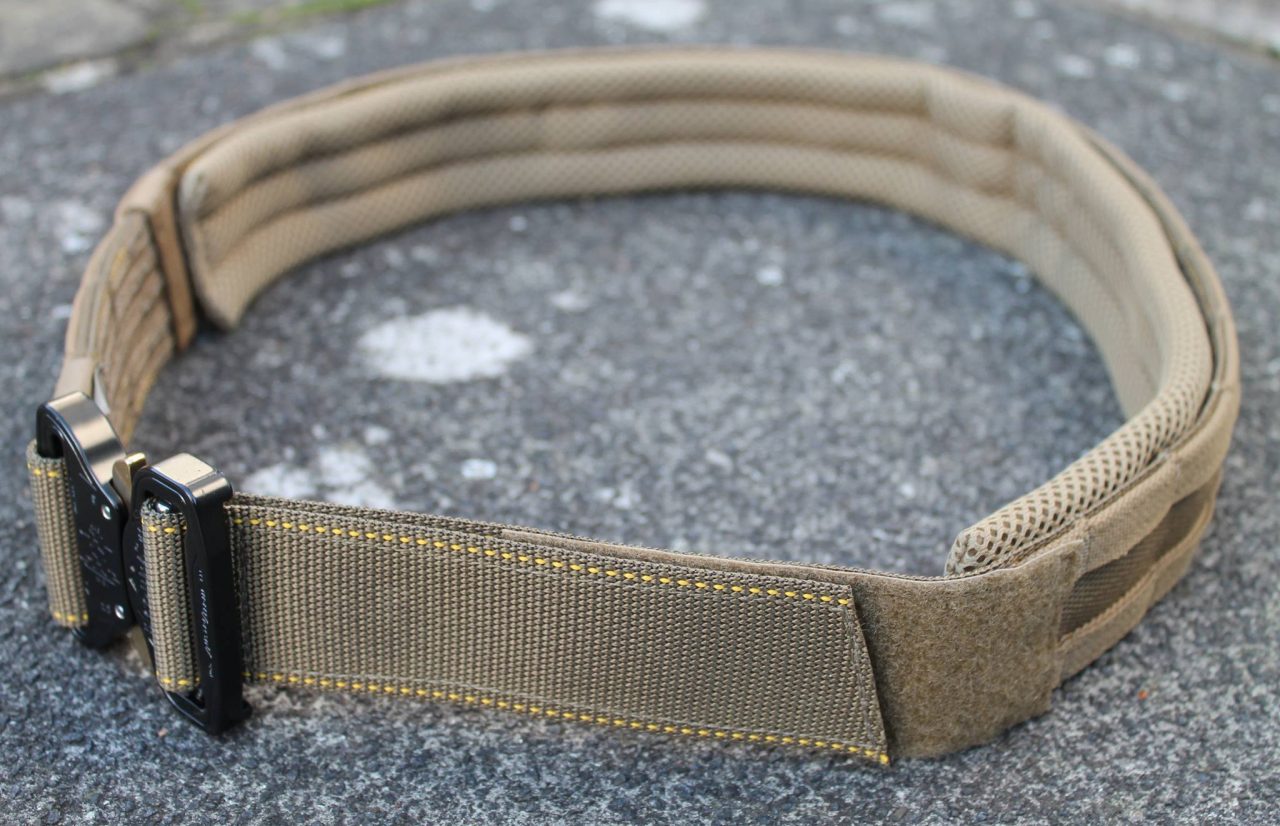 Is there still any value in older style belt sleeves with 3 full rows of PALS vs a new 2″ belt with two half inch rows of webbing? In terms of full on PLCE or ALICE style setups yes, but I think you need to be mounting a great many pouches around your waist with a substantial combined internal volume before you make that step change to the old ‘warbelt’. Fact is the British Infantryman is the master of belt webbing and as the gear they use shows, PALS isn’t actually necessarily the best choice for setting up a belt as primary load carriage for a large amount of equipment. Some older and less modular, but more robust, systems tend to be the preference and I can understand that entirely. For myself in a hobby context when I only have a holster, dump pouch and a couple of mags on a belt, the much lower overall bulk of an un-padded 2″ belt is definitely the way to go. Even if just from a transportation perspective let alone anything else. Given how many years a great many folks have spent searching for a solution to their belt gear not bouncing around when running or riding up when crouching, there’s just no arguing the merit of the velcro interface compared to the classic old thickly padded 3″ belts that lacked said interface. Especially given that they tended to have extraneous mesh and cordura above and below the actual PALS rows, resulting in a belt that could be pushing 4 or 5 inches tall in places. Not conducive to unhindered quick movement.