I’m going to be focusing on rifles in this post, the stand had a wide range of H&K pistol calibre weapons on display as well as the MG4 and MG5, however my in-depth knowledge of those weapons is frankly lacking whereas the rifles and carbines I do know a little bit about. 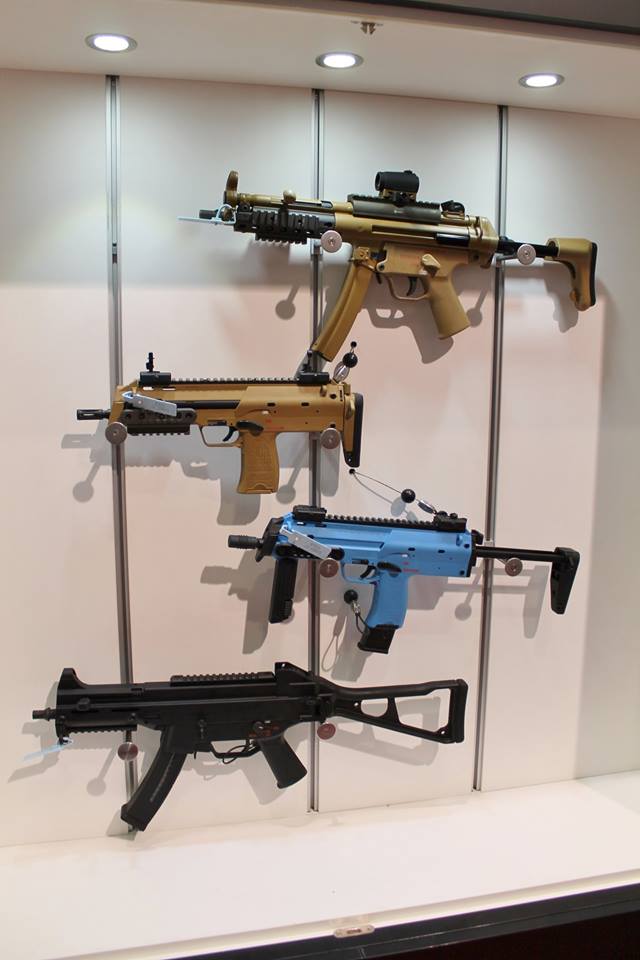 The 556 variant that was new to me on the stand was the 416 F-S, as has now been adopted by the French military. Scheduled for phased delivery spread out over the next decade. It’s a fully featured A5 variant of the rifle with the complete ambi controls package. The front of the barrel, as I was told, is altered to fit the French bayonet. I asked in speculation if the fitment was for rifle grenades, since the French notoriously love them and it looks like that sort type of fitting (wiki agrees) but the rep said negative on that one, supposedly they will have the HK UGL. I’ve not unearthed any further info digging around. Of all the NATO nations using 556 rifles, most have not updated in some time with lack of serious leaps forward in small arms tech, combined with new anticipation of a 6.Xmm calibre potentially coming along in the next few years, I think there’s potential for this to be a move that’s somewhat jumping the gun for the French. Could really bite them if the US adopts a new standard cartridge in a few years time, but we shall see. 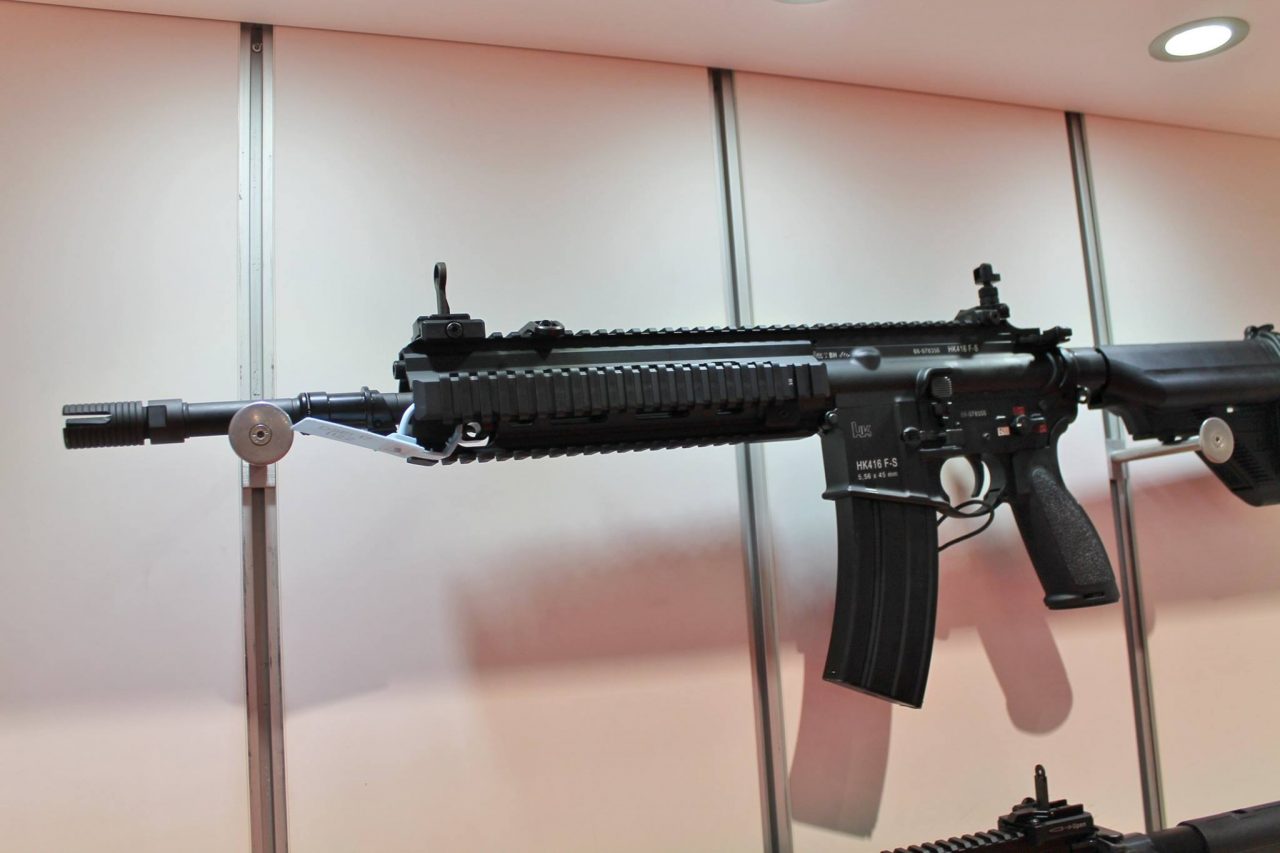 The 417A2 and updated G28E3 ‘Patrol’ (shorter, lighter) were new to me and the 417 features the full A5 ambi control setup. The HKey forends, slimmer stock and colouration pictured are also new from what I can gather, but the quad rails and the extended partial pic/slick type rail from the previous G28 are accessories being made available for both rifles. Apparently there has been some optimisation of the internals but I don’t have any details. 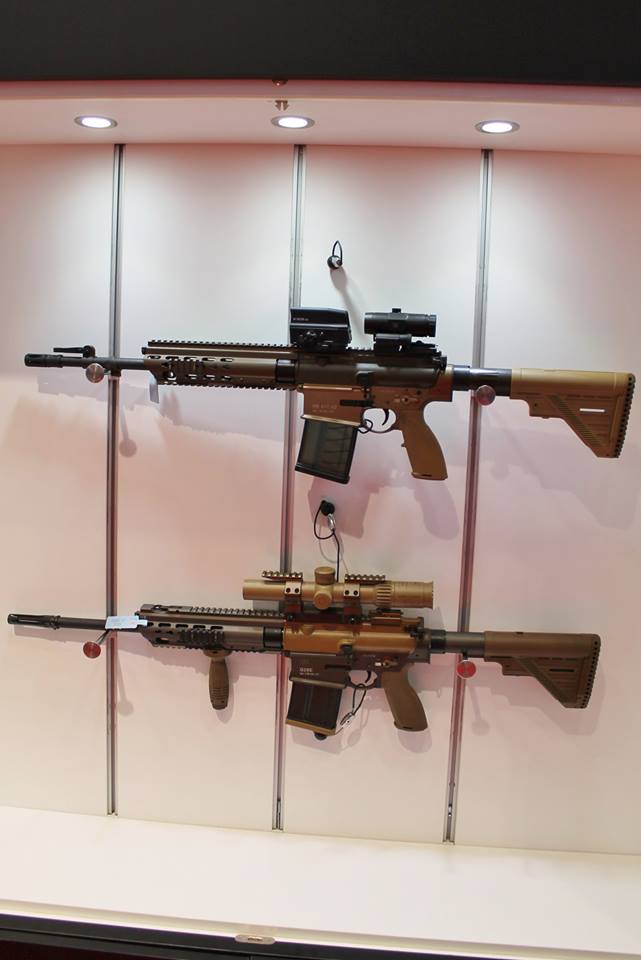 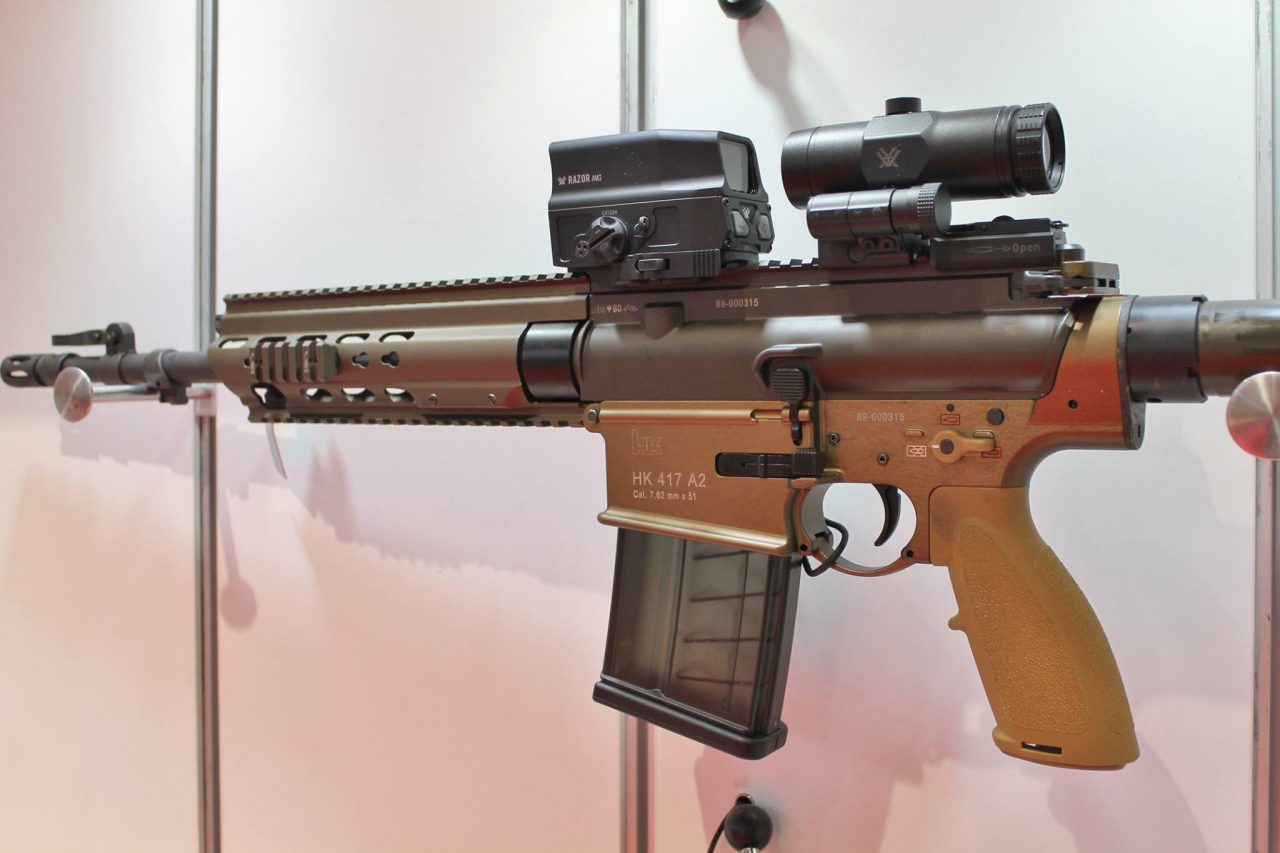 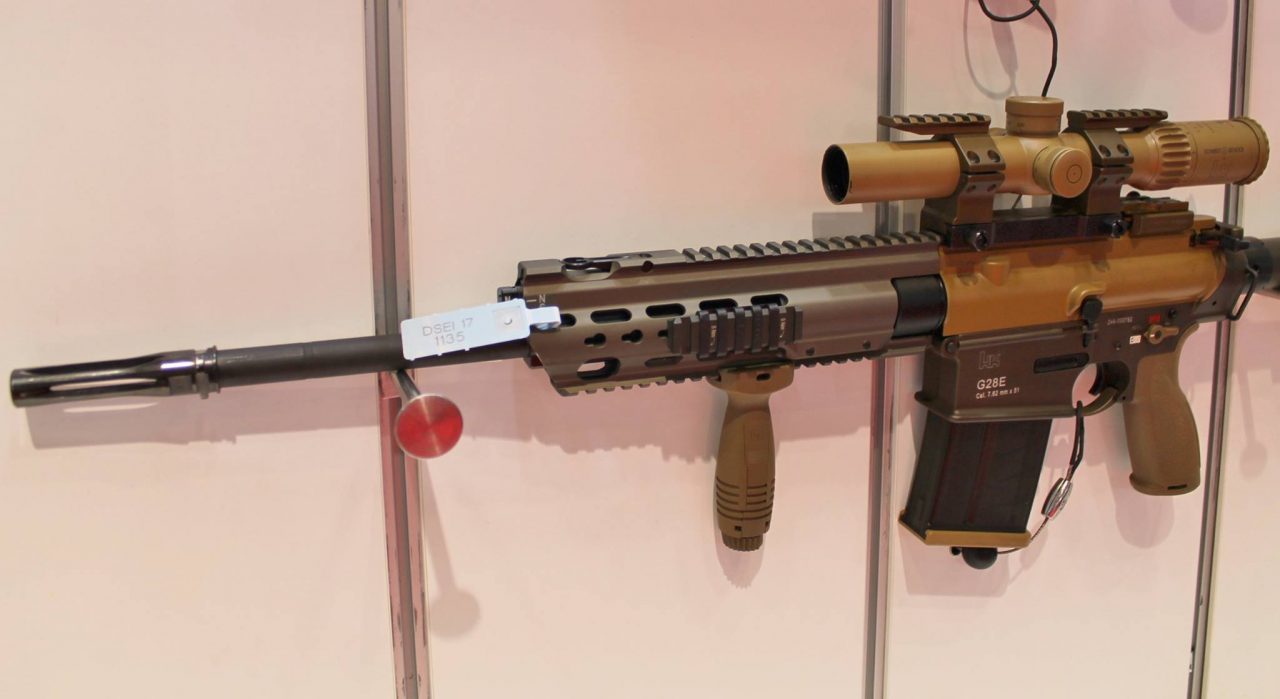 And yes, finally I got hands on with the L85A3. I don’t know anything with regards to whether the MoD has actually decided that the fleet will go through this improvement cycle or if this is just a concept H&K are putting forward. The key demonstration here of course other than the colour improvement is the semi-monolithic top rail with the ELCAN Optical Technologies LDS and a clip-on Night and/or Thermal optic in front. Surprisingly while that enormous bulk of optics does inevitably throw the balance, you’re getting a whole load more functionality (day or night) than you are with the old CWS in a slightly smaller and lighter package. Markings were on the right side adjacent to the toe of the butt with the usual NSN and A3 writing you’d expect. My fear is the sling swivel inclusion means a continuation of the awful and ancient issued 3-point sling, but even as an atheist I’ll pray to somebody for that thing to get gone. The Grip Pod makes more sense now the barrel is freefloat, though personally I prefer to just cut the weight and use the mag as a monopod when prone, however if you’re in one place for a while that bi-pod is undeniably a nice accessory to have. 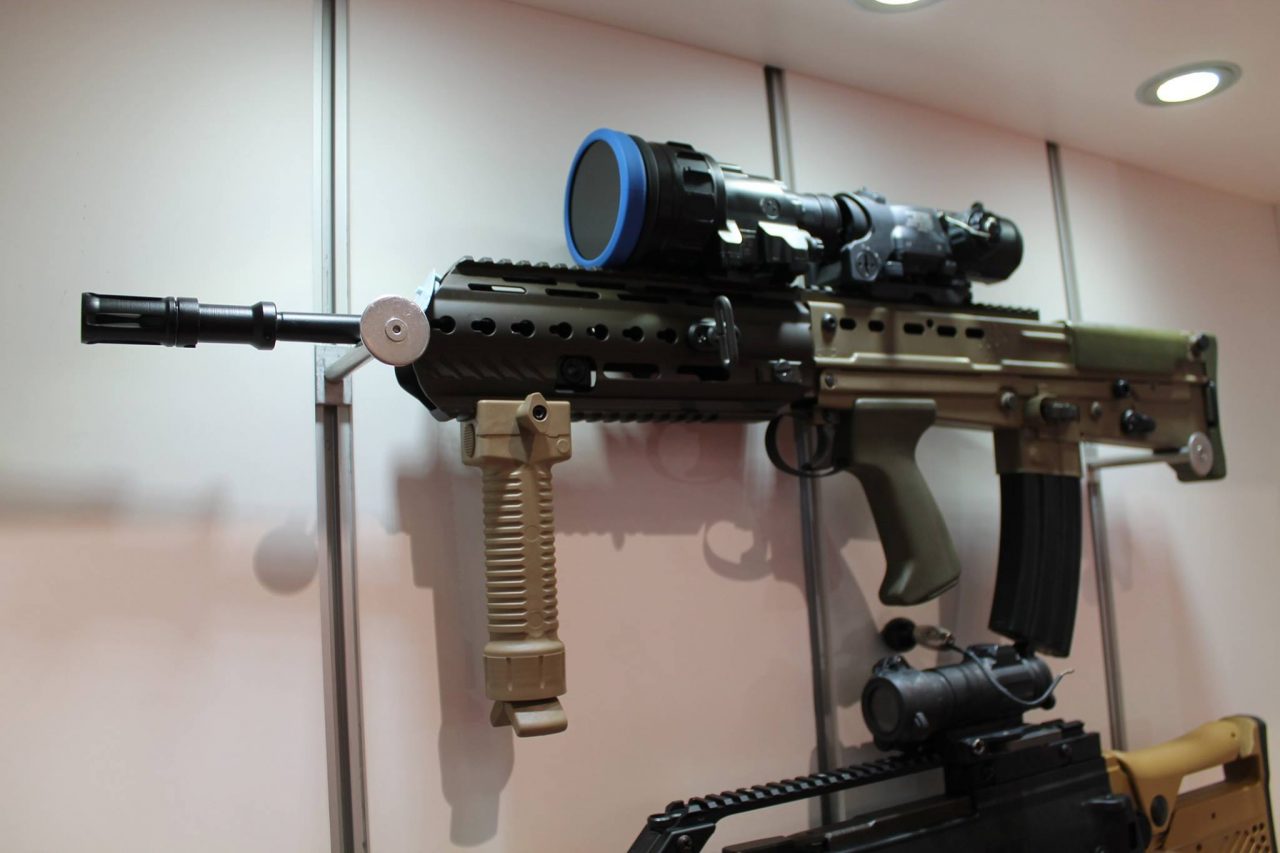 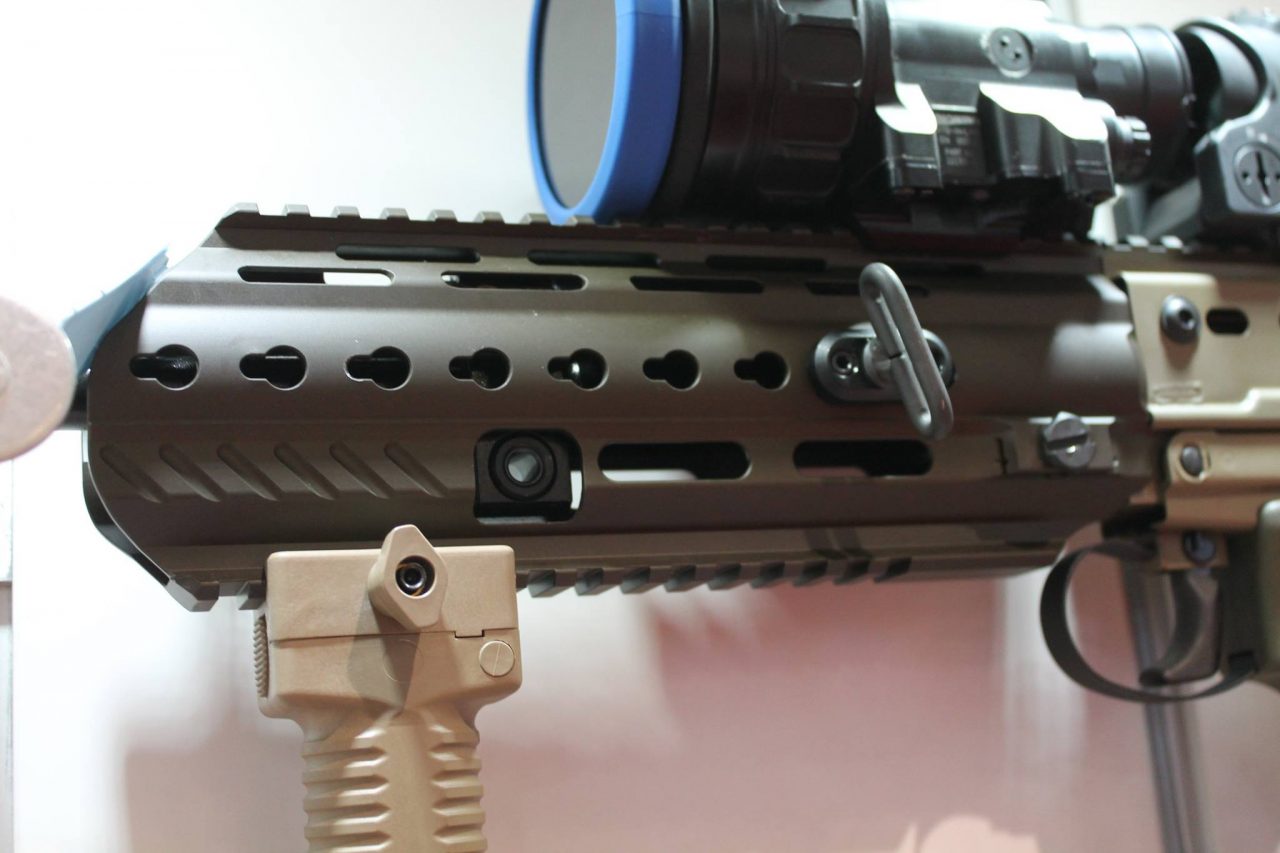