A few weeks ago I mentioned that I’d been working with Roman for a while now on making my own interpretation of the G3 uniform available through him and I’m happy to say that tree is now bearing fruit.

I won’t go in to the FULL detail in this post because the site now has a new page for all that (click here and be sure to bookmark), but the base idea is this: offer a ready-made package of features based on my many years of buying, owning and using Roman’s product that refines the G3 cut for the end user who wants the best aesthetics and a light, more comfortable uniform at a lower price without compromising anything at all in terms of durability. 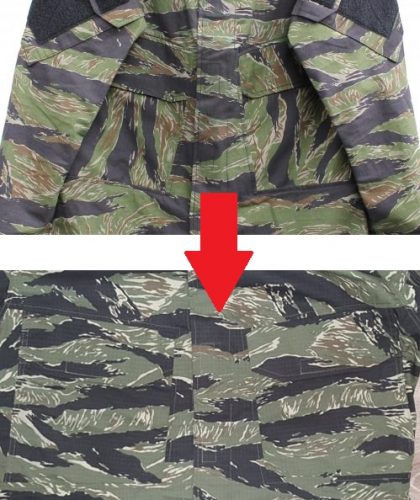 The key points are that we did away with all the least used and least popular features of the G3s. As an example, reducing the combat pants from a rather excessive 10-pocket design down to 6 pockets, which is still more than 90% of people will ever need, but in the process we re-aligned the fabric on the knee pad pockets and main cargo pockets to bring the camo pattern all in to line which is usually an added extra that will increase the cost of your uniform when ordering the original G3 cut. F9 Edition combat pants however are actually slightly cheaper than G3s.

You’ll also be in good company if you pick up a set because Soldier Systems Daily himself was the very first person to order a set of these and his uniform in Tigerstripe is shown here. There was a little misconception on the last post that because the picture was Tiger these would only be available in Tiger, which isn’t the case. Any camo or fabric that Roman has or can get can be used in the F9 Edition uniforms, including woodland and desert Tigerstripe.

If you’re interested, then again be sure to head here to get all the details and if the F9 Edition G3s are for you just get in touch with Roman and place your order. If you have any other questions just head to the group or DM me. Cheers folks 🙂