If you’ve no idea what the High Speed Gear TACO line is by now then you need to just go and look that up because you are lagging behind the times my friend.

At this point I’d say HSGI are probably doing most of their business in TACO form, they have dozens of variants before you even get in to colour options and today I’d like to talk about the version I think might well be the best in breed. The one big caveat to that is that I’m yet to try the polymer TACO and there isn’t an abundance of information out there discussing it either, so things could change if I ever pick one up. Especially since the LT is the most expensive of the 3, with the original in the middle and the polymer model being cheapest.

Right now though we’re looking at the TACO LT standard size variant, PALS mounting (vs belt). I mention the PALS mounting specifically as it will do the job of the belt mount using some simple velcro one-wrap; check through my videos on YouTube to see the explanation of how to do that effectively. I’ll tend to opt for the classic original sizing versus any of the double stacks because I think the lower profile is a bonus in most situations and as far as magazine compatibility, the standard rifle mag size pouch is probably going to provide the widest range of service. That said if you have different needs then the HSGI range will cater to just about any desire.

The great prospect about the LT is that it claims to be 30% lighter than the original model and that was what I really wanted to test out because functionally it seems to perform exactly the same as the original. So if about a third of the weight can be shaved then that seems like an optimal trade deal. Granted you pay a few dollars more, but the cost to benefit in your own specific application is a very personal thing, so I won’t try and elaborate on every single usage possibility.

Now the standard pouch I’ve depicted here in the weight comparison is not the latest production model. There have been 3 styles of PALS backing on the regular TACO that I’m aware of; the original where the webbing was as tight to the back of the pouch as it could be which created essentially a global meme in terms of how stupidly hard it was to route the MALICE clips. Next came the pictured version which still used webbing, however the manufacturing process involved actually putting some slack/extra material in the mix to open up the loops, which certainly helps. Now the latest versions use a laser cut section of cordura which I’d imagine will make attachment a breeze compared to the originals, especially when combined with the HSG Clips. 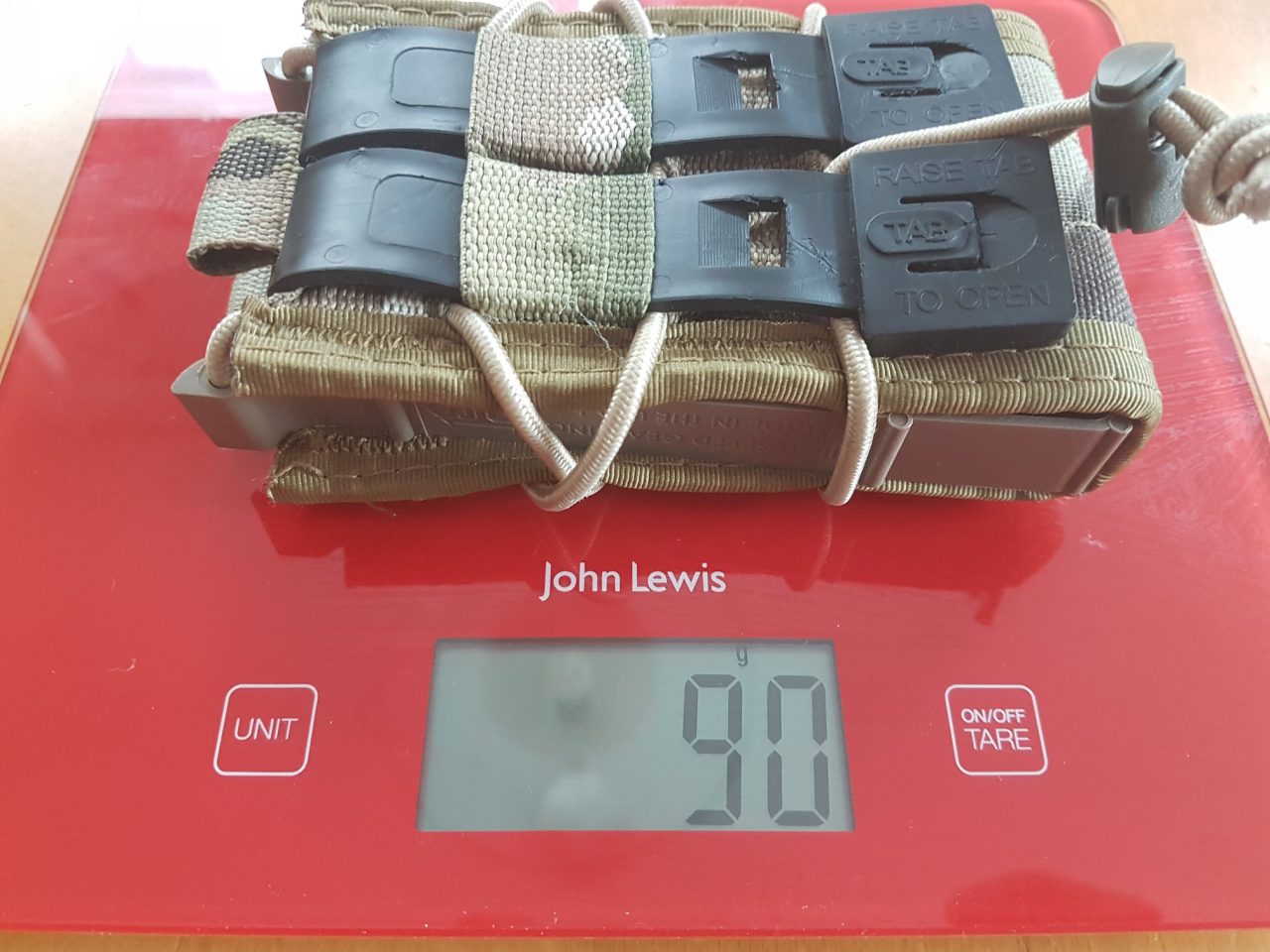 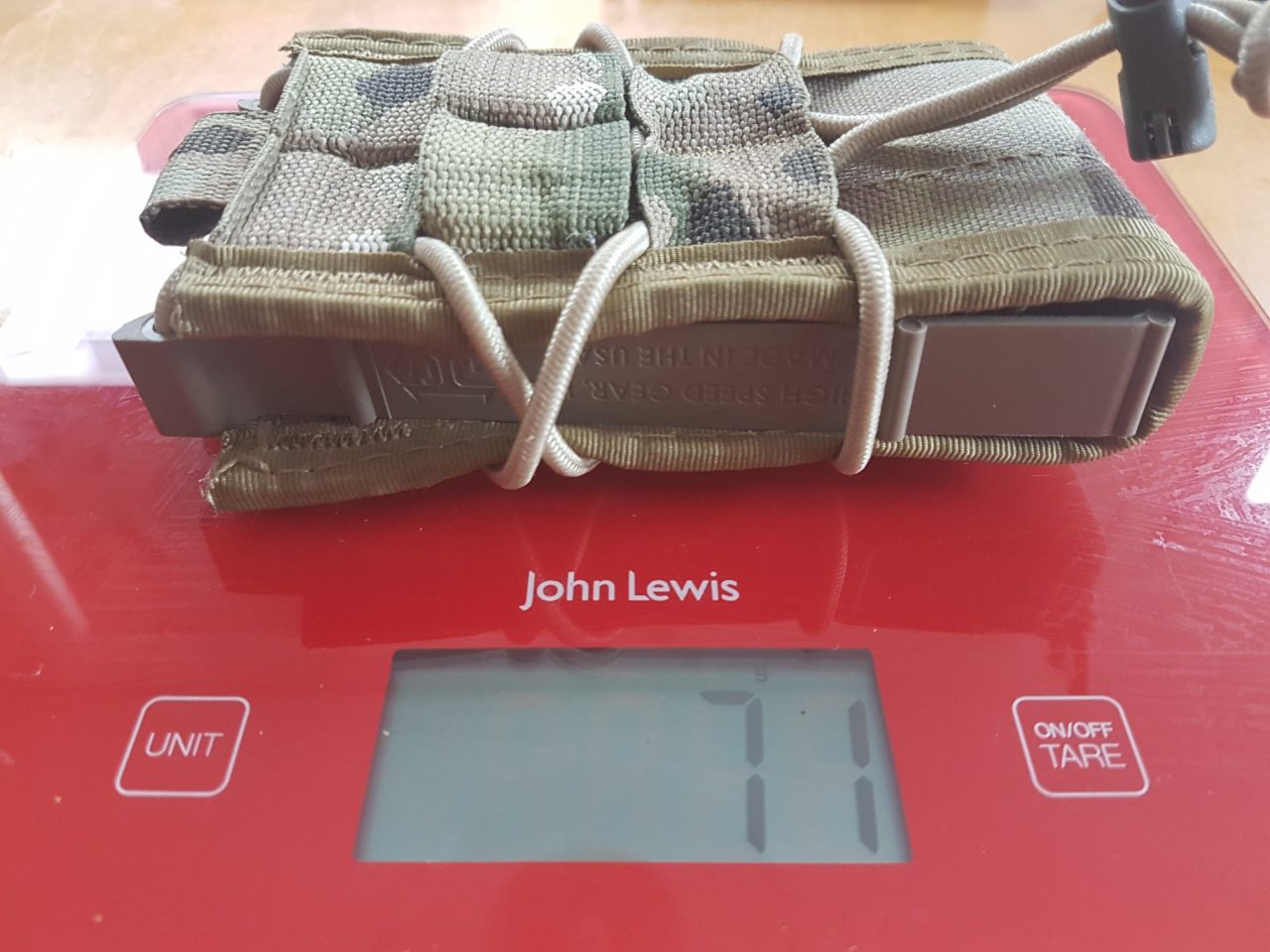 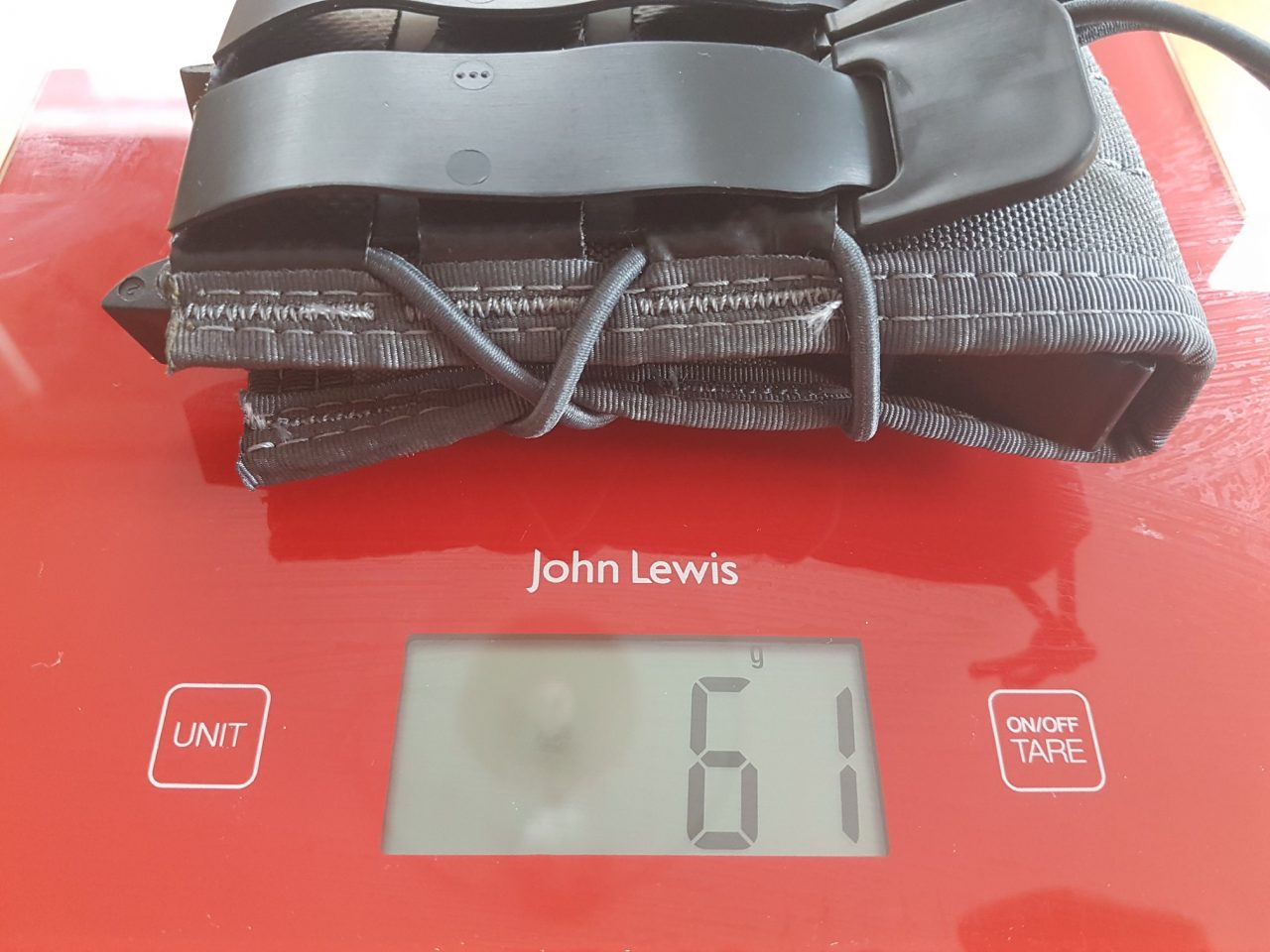 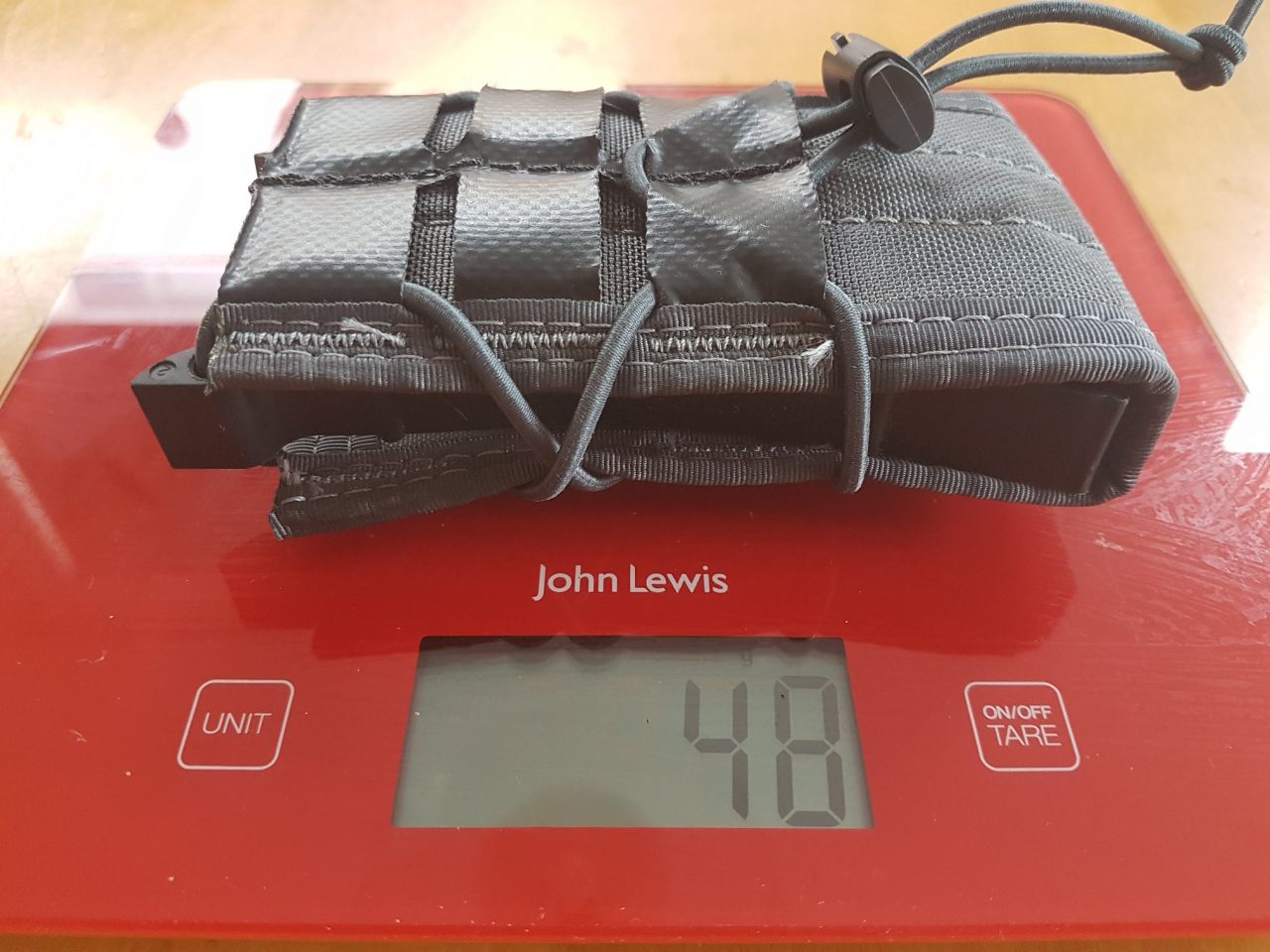 Taking that in to consideration the standard pouch shown here may weigh a gram or so more than the current production but I think the differences are small enough to not warrant concern. As you’ll see from the scale numbers though, the 30% claim is not a lie at all, the percentage is pretty much dead on (even an underestimation to a small degree) both with and without the clips attached. We can also see that the 3-row MALICE clips weighed 19g per pair whereas the HSG Clips knock that down to 13g. MALICE are truly bomb proof of course and almost no amount of force that might realistically be applied would ever break them, but unless you’re so unlucky as to be dangled under a helicopter just by your pouch clips I very much doubt the HSGI alternative will ever fail you either. Whether the gen 2 MALICE with the skeletonised geometry and lower weight, but theoretically stronger securing method, might be an even better option I am unsure at this time but it’s a potential to perhaps bear in mind. We’re really getting in excessively deep in to the weeds at that point though for 99.99% of people. 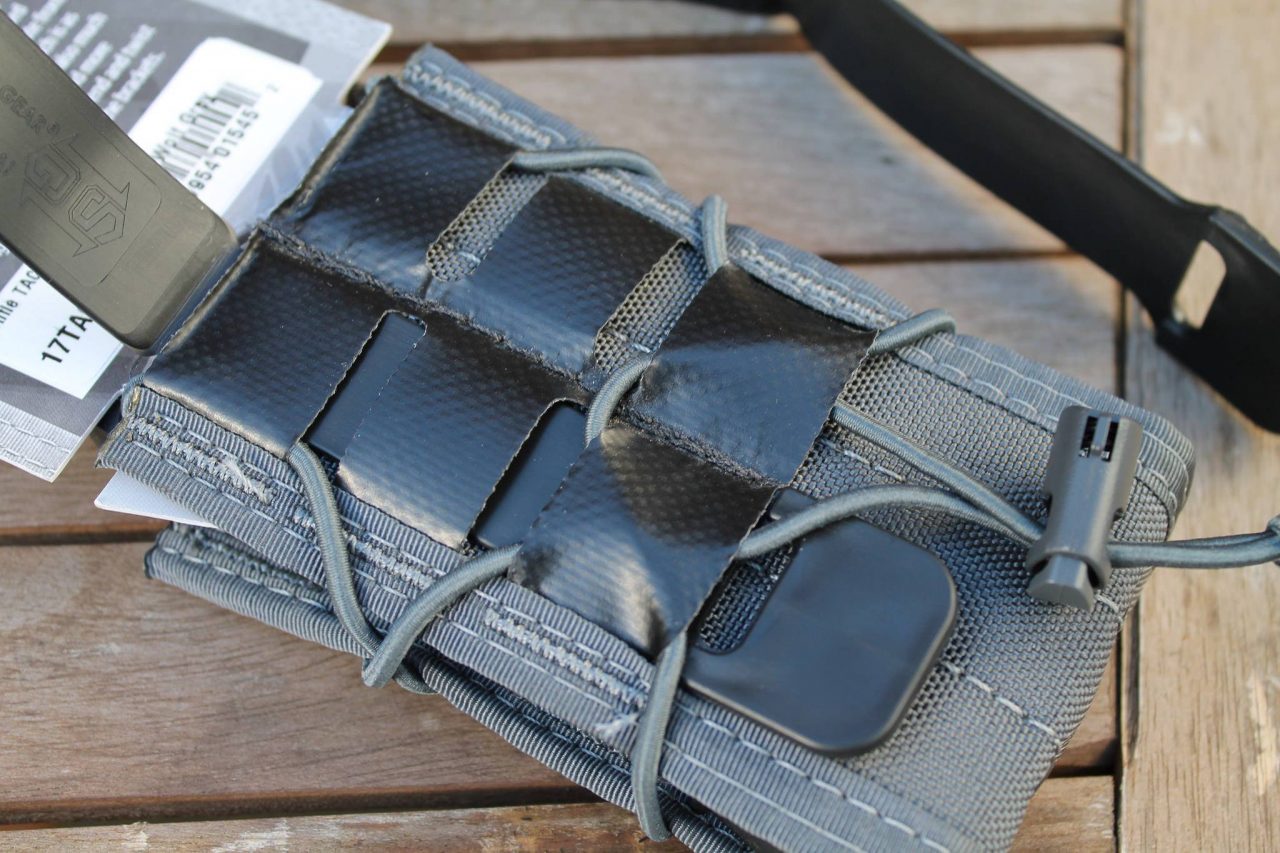 I took a minute or so to give the LT pouch a close-in inspection and really nothing jumped out at me in terms of how or where the weight has been saved, the only obvious difference is the laminate backer piece but the disparity in mass between the laminate and webbing will only be a couple of grams I’d wager and doesn’t account for all of the weight saving. Either way, as I mentioned earlier functionality seems to be the exact same, so the LT is winning in that respect.

If a non-lidded pouch is suitable for your personal magazine carriage needs, i think that overall the TACO LT is very much worth considering. You can even use the webbing on the front to add a shingle style elastic retention if you’re planning to go parachuting with kit on. All the versatility and fast access of the original design, but shaving just a bit more weight off of your gear. Never a bad thing.