There’s 3 problems with talking about boots on the internet:

1. Actually forming a genuinely informed opinion on even 1 pair can take ages, let alone the line up from a whole brand and double-let alone multiple brands. By the time you’ve figured out what’s good, they might well have stopped making that model given the market demand for constant new-ness.

2. To review a boot in-depth is intricate as hell, it’s also hard to define a lot of the qualities in a quantifiable manner and very, very personal. I don’t think it’s the kind of gear you can really talk about ‘just a bit’, you either go right down to brass tacks or do a very basic overview. Hard to be anywhere inbetween.

3. Unlike many other aspects of gear a person might use for a ‘tactical’ purpose, footwear of both military design and from the civilian/hiking type sphere is pretty much all applicable. There are lots of companies making amazing outdoor clothing that don’t offer camo for example, but with boots those aesthetics are irrelevant. This then opens up the range of feasible options available to levels that are almost hard to actually comprehend. The only other item that maybe gets close to approaching this issue is gloves, then maybe backpacks after that and just about everything else like uniform, helmets and load-carriage is far more specific to tactical stuff and the viable choices are made by far fewer companies.

Caveat with number 1 of course would be folks on constant deployments who can actually select their own boots, but then they’re usually pretty busy with more important things than doing detailed gear reviews (talking generally here of course).

What I will say is from my *limited personal experience* LOWA are the brand on top of my list. I’ve got an old-school black leather pair that are at least 9 years old now and have spent dozens of hours up to the ankles in bog and never leaked a drop; though they take looking after. When I know I’ll be doing the rare air force thing of actually slogging through mud and being miserable in the elements, they’re absolutely the pair I reach for. Totally the opposite build to the standard issue lightweight crap that I cut about base in when I’m doing some annual refresher that necessitates MTP instead of blues.

I picked up these Zephyr GTX models from UKTactical on a pretty sweet sale about 18 months ago (my usual delay in the gear posting queue). Now do I recommend gore-tex lined boots in general? Hell no. Should you buy nice bright, tan, suede outer layer boots for use in most of Europe? Also no. But when a very high quality product comes up at a very good price that’s also the time you should have been setting money aside for.

GTX lined shoes can and will overheat and sweat-soak your feet in any weather above ‘quite cool’ but as with anything if you make sure your kit suits your environment you can stay comfortable. So don’t wear these things in the summer. I keep them for pure and exclusive winter time usage unless I’m expecting to get very wet in the spring/autumn. The GORE-TEX® Products liner keeps in a decent amount of heat allowing a comparatively thin and light boot to work well under some physical exertion down to typical UK winter temperatures. Despite the arid climate appearances, I found the lack of any venting or mesh panels as you’d see in an actual arid climate boot to create a pretty good balance overall. 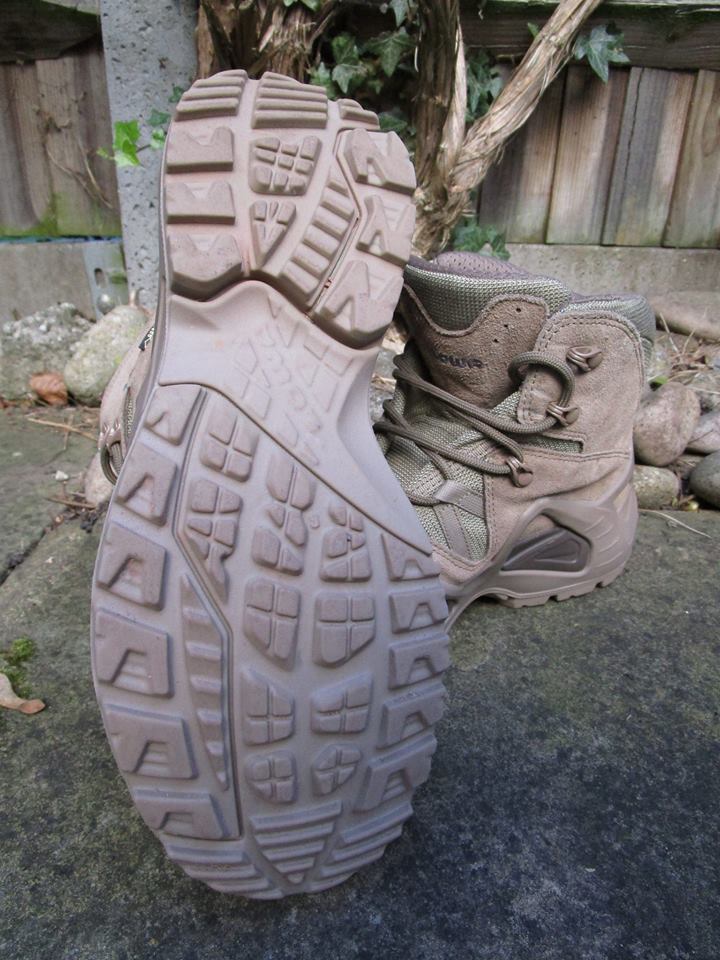 They worked borderline perfectly when paired with some good softshell trousers and moving through a lot of common British countryside terrain. Long wet grass, woodland mud and forest foliage that’s all sodden post-rain or dew; or just permanently wet through December. Far from any sort of environment that poses any real danger to anybody’s survival, but still the sort of terrain I’ve witnessed completely soak the cordura boots and cotton blend trousers other people were wearing. They spent the next 6+ hours being damp and uncomfortable, could’ve been longer had the sun not put on a strong appearance. And why did they have to do that? Because they wore all the same gear they do in the summer months and *maybe* brought a Goretex jacket, totally ignoring the kinda-shitty inbetweens that are the actual reality a lot of the time in a lot of temperate countries.

While that sort of thing may be far from cool to talk about, it’s honestly what I think most people should be equipping for most of the time, certainly in the hobby arena. Like how often do civilians need a tourniquet vs how often do you see people pushing blow-out kits with chest seals on social media? It 100% makes sense to prepare for the worst no doubt but when I build a FAK I put in gel for small burns, plasters, tweezers etc THEN I think about maybe a compact TQ and some bigger bandages. How often have most people in their daily lives encountered an injury that’s just annoying vs one that’s really life threatening? I’m going to wager the ratio is in the region of 100000 to 1, so yes prepare for both to some extent, but definitely make sure you’re ready to deal with the niggling little things and not just the Hollywood moments.

Appreciate that seems like a real tangent, but it’s a good analogy to my mind. These boots have served me well for the bad end of the spectrum of weather that doesn’t require more niche or specific survival gear. This particular model is very light, flexible out of the box, comfortably lined inside and most importantly built to the quality I’ve come to expect from LOWA. I’ve seen the soles come away from tons of other boots, I’ve seen inadequately thin synthetic materials wear through and fail under minimal usage, I’ve seen laces snap far too quickly and eyelets pop far too easily. Not with this brand. Good shoes are crucial. A rip in a shirt? You’ll carry on pretty much just like before, not the case if your boots totally fail you.