Generally with any given foundation to a system you’ve got a couple of types of options available to you. The first is the older choice that’s been around and popular for years with tons of accessories and parts support from both the original manufacturer and the aftermarket. Then there’s the new kid on the block, which has some great new features built in but can’t really be customised at all yet; maybe 1 or 2 little bits from the originator but nothing from the aftermarket.

My Gentex Corporation/Ops-Core FAST Carbon here represents the former of course, with MTEK creating the latter. You see this phenomenon with all sorts of things and in the realm of helmets the middle ground choice would be the Team Wendy, but I don’t personally favour the middle ground. You can make the older option in to something great by using that aftermarket support and the newest kid on the block obviously shouldn’t need much changing, but the interim choice rarely fares as well to my mind.

I think a firearm analogy would be to have the AR or AK platform at one end and modern weapons like the HK433 and MSBS at the other. Stuff like AUG and Galil in the middle. I’m hoping you good folks are following me with that one. I’m sure there’s a good car analogy out there too but I’m much too boring to know about cars. 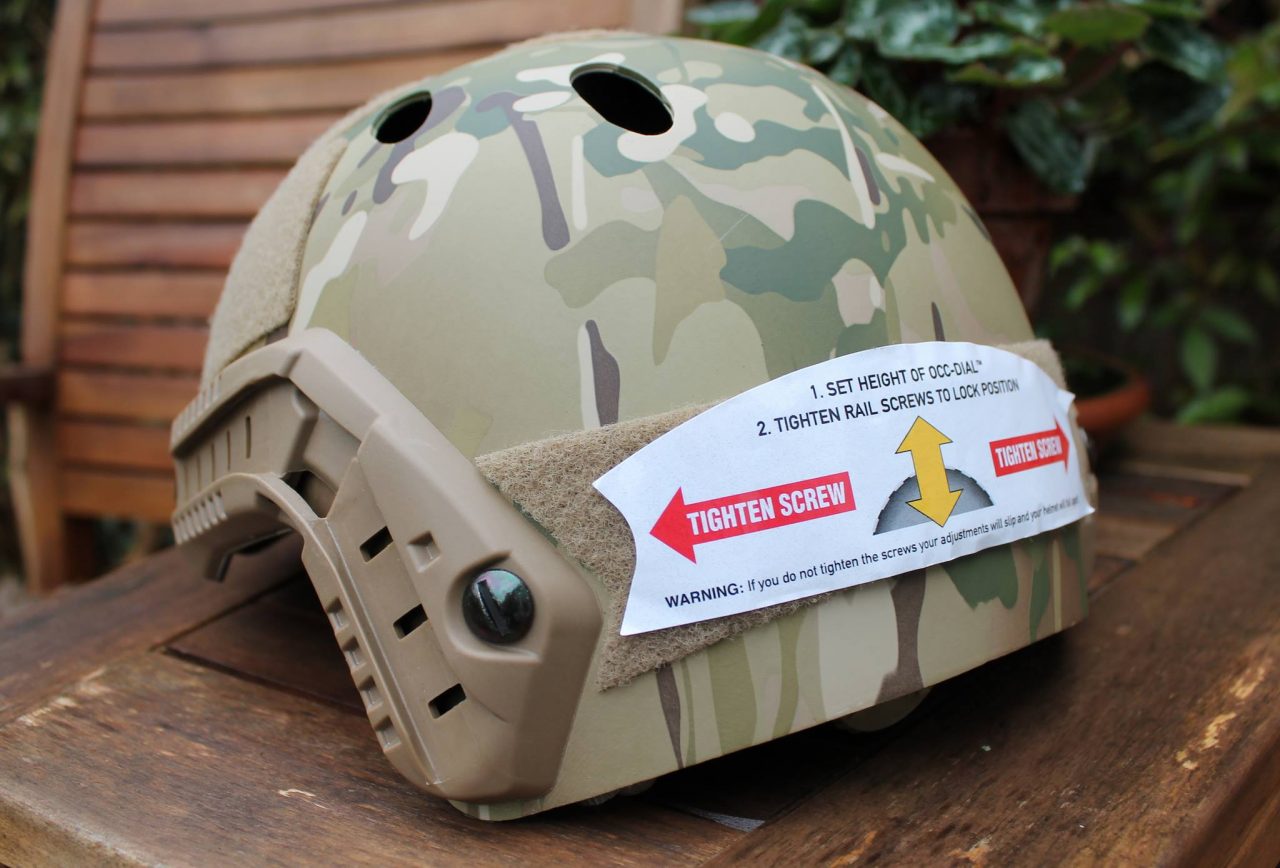 So why the FAST Carbon? First off I can’t use a private purchase helmet for work because I’m not cool enough, that leaves hobby usage. I don’t own my own firearms or frequently take shooting courses where armour might be wise to have, so ballistic protection is out and I’m left with impact protection. I’d be losing out on ventilation and carrying more weight with a ballistic threat rated helmet. I wanted to have an OC FAST in my collection to represent one end of the aforementioned spectrum and give myself a project to gradually adjust and add to over time. While the FAST Bump is definitely the economically sensible impact option given the plastic construction, it so happened that ODIN Tactical had a pretty insane sale on the Carbon model in Multicam and in my size, all while I was away on a work trip (if you know why that’s a good thing, you know).

There’s a few major advantages to the FAST Carbon. First off you have to give credit to Ops-Core for finally getting around to integrating an adjustable headband and suspension system in to tactical headgear. We take it for granted now but it took a strangely long time for the notion to jump over from the likes of cycling and climbing gear. Adding a sort of inverted pic rail to allow folks to finally mount lights and cameras without just using a load of tape and velcro was also of course a nice step forward.

The shell itself is obviously the main event here. I had my eyes open going in to this and I’d recommend to anyone that you prepare to not only buy the helmet, but set a fair bit more aside to add and replace various things. If you want to make the whole setup actually comfortable and a good platform for night vision, cameras and lights that is. The carbon fibre is of course insanely light and supremely strong which makes a superb foundation to build on, but it really does need building work. 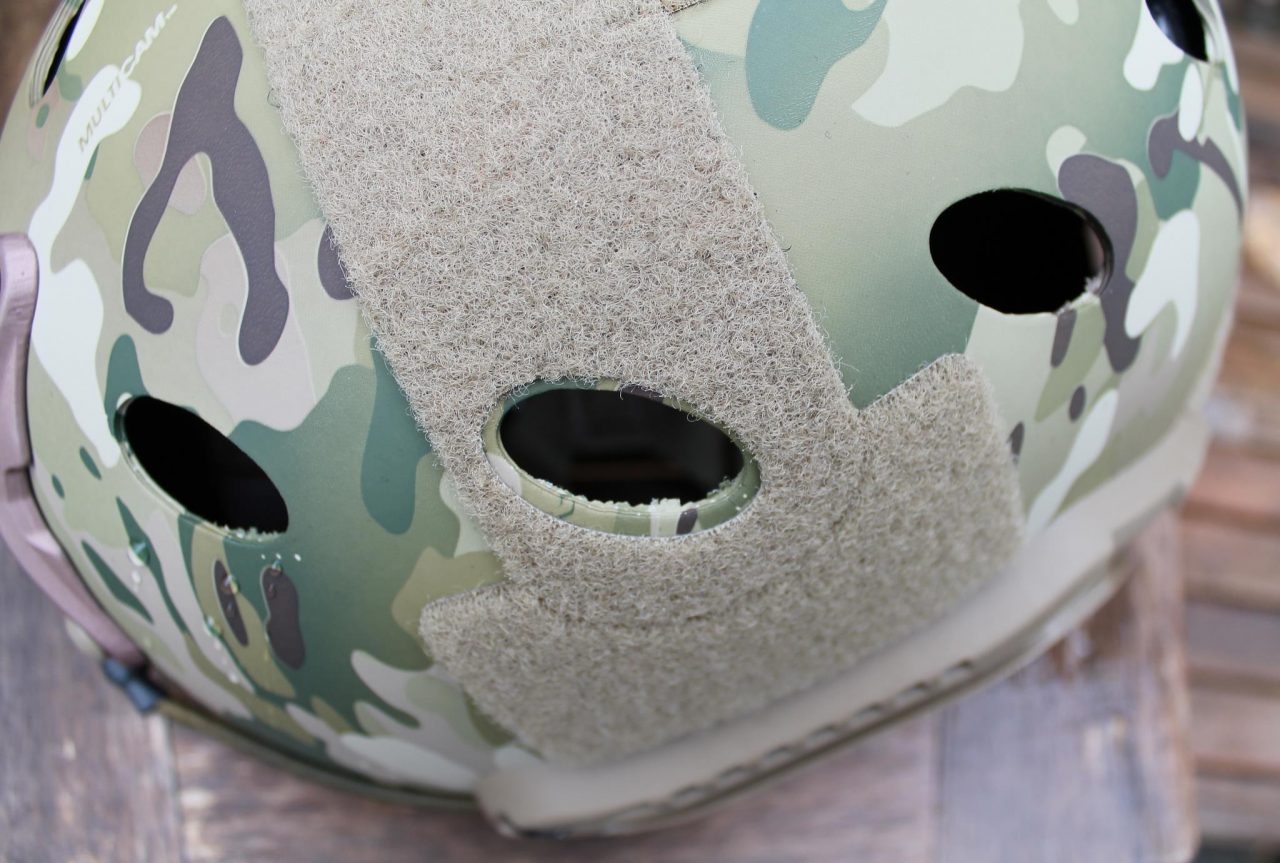 I’ve not seen any real info on the new SF model helmets from OC so hopefully improvements are coming, but many elements of the currently retailed helmet package are, quite honestly, pretty bloody bad. Some of the carbon construction on the shell is poor in the ventilation holes as pictured but the biggest culprit is without doubt the ‘padding’ and I use that word in a very loose context. Each pad is actually comprised for the most part of expanded polystyrene (as in what they packaged your new TV in), which is easily broken and provides no cushioning for general wear. Whether the idea is it should crush under a really severe impact I don’t know, but I’m pretty confident that better padding using dense foam would be just as good for that purpose, while of course also being much more comfortable for 99.999% of the time the helmet is on your head.

The very thin piece of foam that does sandwich between your head and the polystyrene is lacking in density to say the least, it squashes down to nothing and subsequently wearing this helmet with almost anything attached to it can create a nasty headache within a few short hours. This is compounded by the fact that the occ-dial headband is the main method of securing everything to you. You don’t crank down too hard on that of course, but then again even with fairly mild tension it’s not like the headband is particularly nicely padded either. Personally I wasn’t able to use the pads that are meant to fit to fit in the sides even without ear pro running inside, not without getting a literal instant headache anyway. This means there’s even less stability, especially if ARC mounted ear pro is not used. 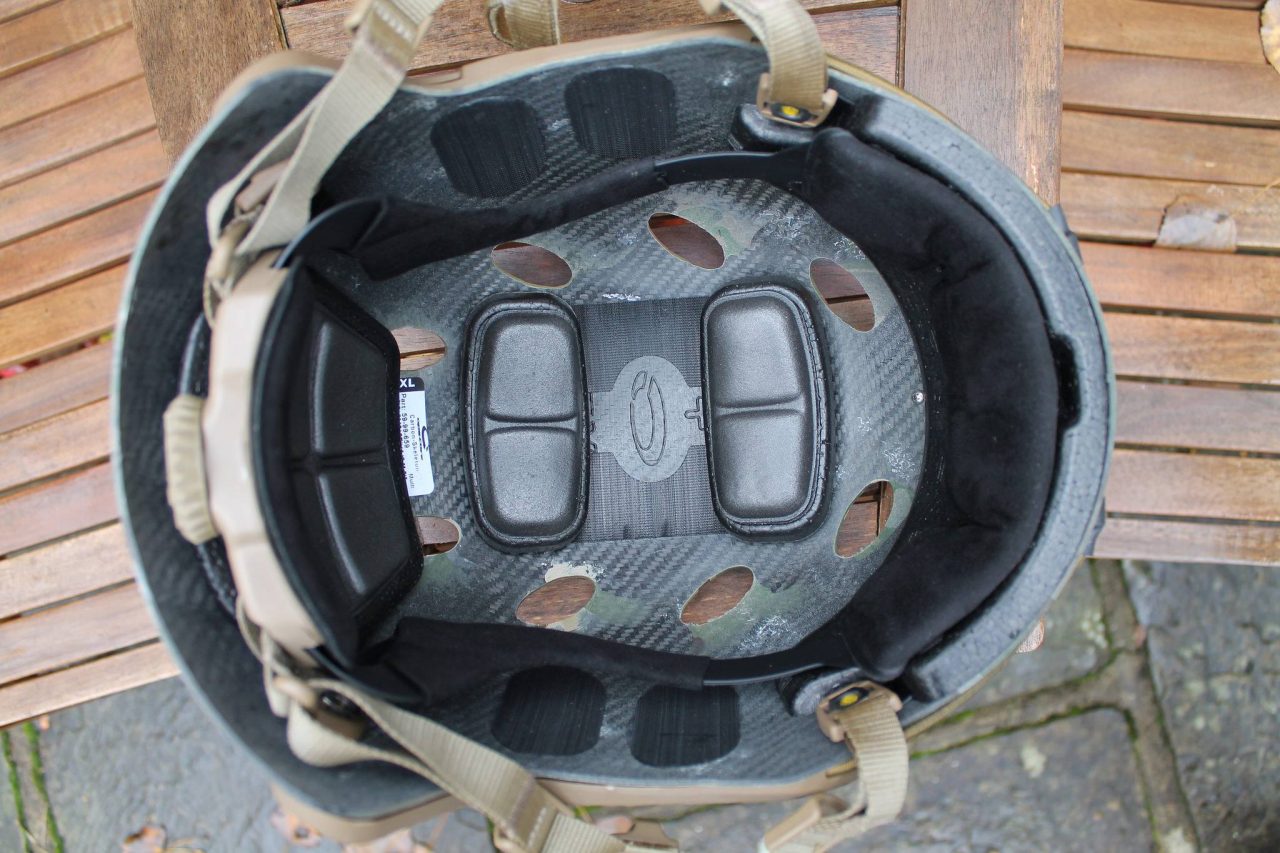 The chin strap uses a tubular webbing that’s smooth and comfortable and the adjustment is self-contained which makes a nice change from issued helmets, but it’s more of a backup retention method.

Fortunately moving to the outer surface things do look up quite a bit. The skeletal type 3-hole shroud weighs barely anything while maintaining all the necessary strength. The anodising scratches if you breathe on it admittedly, but not down the metal. The infamous rails are present, well moulded and solidly mounted. Inbetween the 2 previous items we’ve got the bungees that hook nicely in to night vision and will really help take the very last bit of slop out of an otherwise 95% solid NV mount setup. Then there’s a generous dose of loop on the sides, top and rear for attaching all sorts of things that give your position away.

Looping back around to where we started, this skull caddy is certainly a project. I’ve already added a counter-weight and a nice FirstSpear cover to obscure the offensive hydro dip film. There’s no shortage of electronics you can drape on here that can cost you anything from a few hundred to 10s of thousands. Primarily the pad system simply has to be upgraded, which is my biggest irk with a helmet that costs as much as the FAST Carbon costs, but as long as you’re prepared to put the time in to finding quality accessories and replacement bits the option is there to build this thing in to a genuinely excellent system. A fact that has been well proven by a lot of cool dudes for some years now.