One last piece of UCP to complete the set before we move on to greener pastures… literally. I’m working through a few older photos still (down to around 22 months backlog right now) where I didn’t quite get pictorial for all the features on every item, but please bear with me over the next 11 days up until SHOT. Either directly or shortly after all the content is posted from there, I’ll be getting in to pictures with better backgrounds, better lighting, just better composition all around with more photos per piece of kit. I’ve got zero training or education in photography or media of any kind and the most base model DSLR Canon made. From the point I took shots of my first AEG back in 06 up until now it’s been a continual process of 100% pure trial and error to attempt to up my standards and bring half decent images to accompany all the posts.

So I hit the question of a good combat shirt to accompany the Crye test item/prototype Army combat pants. The US Army combat shirt of the period sells extremely cheaply online, so it’s a solid choice for someone looking to get a good quality upper torso garment to use in any activity where a plate carrier might be appropriate/desirable. You even get full FR construction at a bargain price. Problem is those Massif combat shirts *always* smell weird no matter how many times you wash them and lack both a zip and a proper collar. I’ve had too much neck ache on my delicate airman skin from narrow slings and straps on various gear over the years to go back to any sort of shirt without a decent collar, so that meant the ACS was out.

Since I was only ever going to have one UCP shirt in the collection, I also had to pick something that would be different and interesting enough to be worth featuring here. A generally high standard of construction quality is also a given of course, especially in a ‘dead’ pattern that won’t be in production much longer, if they’ve not stopped printing fabric it already that is. Problem is the options are limited in this pattern. I wasn’t going to try and hunt down and drop the big bucks on a rare Crye shirt in a pattern that’s not amongst my favourites, certainly if I didn’t have the set with the trousers. Tru-Spec do/did a reasonable option and I still recommend their combat shirts for an economical choice, it’s just a very common brand that again I don’t find personally interesting. That left (in the realm of well made options) the Potomac Field Gear below and one other shirt I have seen on ebay that’s a similar cut, but I can’t recall the brand for the life of me. So when the Potomac came up for not much money, that’s what I settled on, particularly given the RRP. Passive Shooter also picked one up years ago in US Woodland when combat shirts in said pattern were a lot scarcer than they are these days, so I’d seen the design and the construction quality already.

The really stand-out unusual feature about the Potomac ‘Advanced combat shirt Gen 2’ is the amount of padding you can fit inside it. The UF-Pro Striker XT that I’m a big fan of accepts some 3D spacer mesh on top of the shoulders, but the Potomac has pockets for 2 mesh pads on the chest, one right across the back and 2 in the shoulders. They’re thickly constructed too, so if you wear the whole lot you really look like a lego man that’s lifted a ton of weights.

Needing 2 layers of fabric to contain these pads around the upper part of the torso isn’t ideal for heat or sweat dissipation and the 1/2 length vislon zip is frankly too long and chunky for optimal wear under armour. Then again if you had all the pads in the front the zip wouldn’t be pressed against the sternum as much as you would normally expect.

The construction is full FR, which fits my OCD nicely as it means I have a complete set of FR UCP. The sleeve fabric is proprietary to Potomac, though I can’t comment on durability or performance. However I would strongly encourage every single one of you to watch the following 2 videos. They’re not just about this shirt, but I found them many years ago when first looking in to this garment and they opened my eyes like never before to the difference FR fabrics will make in the event anyone might actually be caught in a blast.

I got in hot water during my brief stint in the sandy place for not wearing standard MTP and sticking in a Multicam US Army combat shirt and combat pants when I had to leave base, but I’ll take a telling off over risking polyester melted to my skin any single day of the week, regardless how tiny the risk may be in my job. I’ve scrounged up aircrew FR MTP since then to negate the issue when I next deploy. Throughout the ‘bulk’ phase of the coalition deployments in Iraq and Afghanistan burns constituted a serious proportion of our casualties, unfortunately in the air force the civilian mindset is pervasive and being as well prepared as possible is mocked and derided rather than encouraged. I’m not one for living my everyday life in fear, far from it, but I’ll do everything I can to be as well kitted out as I can be if I’m going to unpleasant and unruly parts of the world where westerners are targets. 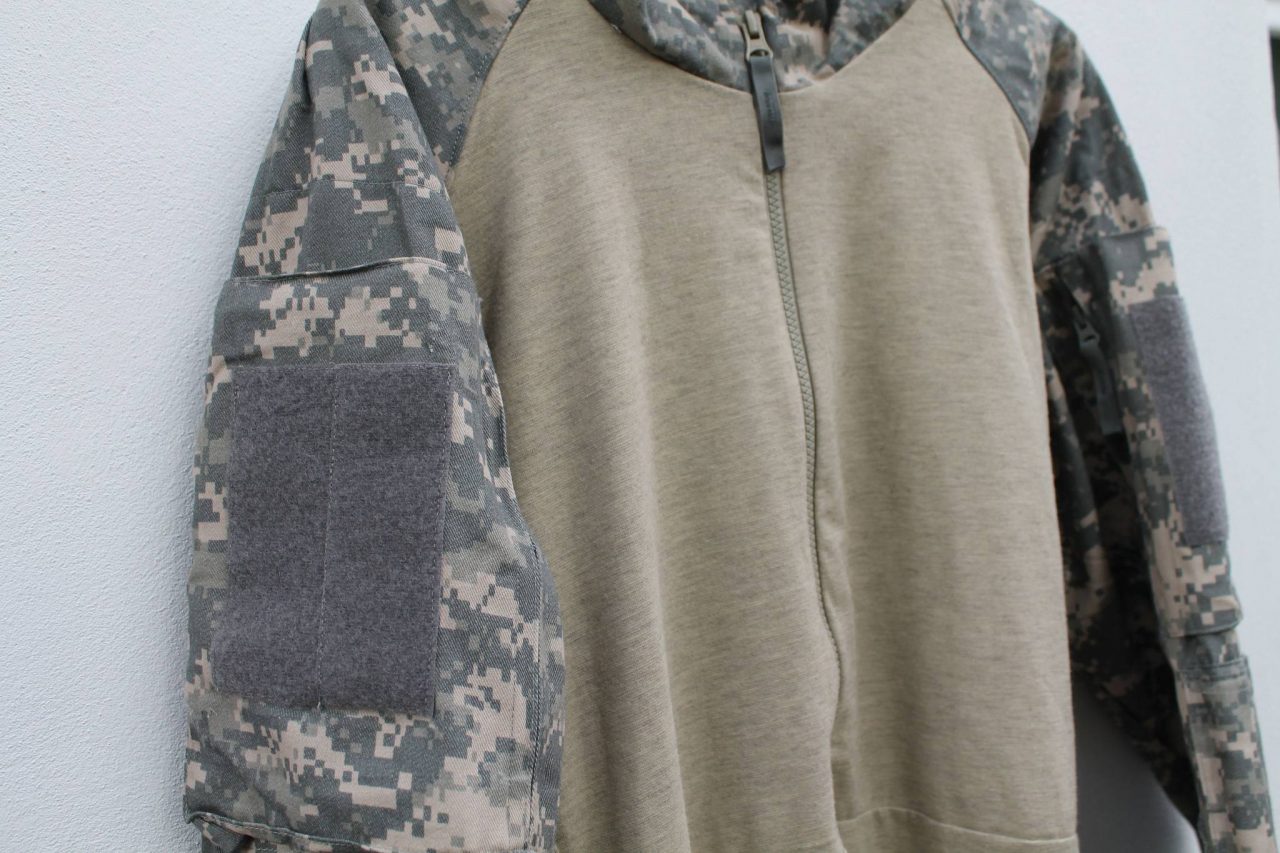 As you’ll note in the upper most image here, the right arm loop fields are in the US Army issued pattern, I believe there’s one area for a flag, one for rank and one for unit/name, but I sent my shirt off (along with some velcro brand grey loop) to an individual who used to do some nice mods for tactical apparel. He did a good job in the end, sadly it took well over 6 months when I was promised only 6 weeks. Payment was made right at the start of course and comms were spotty from then on with a whole lot of broken promises. Those of you who’ve followed me for a while will know I had a similar issue previously with a GBB tech and I’ve even had extensive delays recently with a different airsoft technical service who I’ve used many many times in the past with no issue. So while I’m pleased with the end result as it fits me personal preferences, I’m certainly getting more and more wary of anyone here in the UK who does any work on military uniforms or replica guns. Any time I find someone who actually is reliable they’ll be getting a great deal of business and positive press from me that’s for certain.

Overall, it would get more likes on the gram if it was Crye and I’ve no idea if these shirts were ever issued, but I enjoy having this piece in the collection since it’s of a high quality in construction. Though may not be the perfect choice it ticks most of the right boxes and exhibits some unusual but interesting features in the design. It’s a snapshot of the time period when it was made, put it that way.