A little while back I discussed modular placards, then more recently what I like in a plate carrier – to include mounting those placards. But which is the best type of placard or modular panel?

Given how many people would attach triple mag pouches to their conventionally styled PALS-fronted PCs and chest rigs, a removable panel that does the same as said pouches is going to be a solid and popular option. But which is the ‘best’ PALS pouch of the gazillions out there and how do you integrate that in to the QASM+velcro panel set up?

A hugely subjective question of course and most pouches sit on a scale of maximum speed at one end with maximal retention at the other. As with clothing some items manage to do a bit of both and stray from the line in a positive way, some stray from it in a negative fashion though too. Assuming we’re discussing the truly ubiquitous 30rnd 5.56×45 mag, my belief for the past couple of years has been that the simple open topped pouch with a kydex insert is the best all around option for a majority of applications. Add in shingle bungees or a stowable flap and you’ve got the best pouch going for 95% or more of situations.

ESSTAC have been making pouches specifically designed for their own KYWI (kydex wedge inserts) for a very long time, although they only really caught on properly in 2017 and ESSTAC themselves now even offer a Vel Sys mounting spec placard that features 3 slots for 556 mags to be retained with the KYWIs.

When I got my first plate carrier that could accept a placard however, ESSTAC weren’t making those products, but Haley Strategic Partners had released the MP2 plastic pouch inserts and seeing the similarities to the KYWIs I’d already tried, I decided the MP2 would be the way forward. So back in August 2015 I commissioned the pictured nylon panels from Dead Coyote Tactical Nylon after furnishing him with some MP2s to work from.

Each pouch on the panel is of course built just like the ‘guts’ of a D3CR, because the MP2s are designed to work in the D3CR. The pockets did turn out slightly too deep, but with a few pennies worth of high density foam dropped in this was remedied. Firmly inserting a mag can still cause the ears of the plastic to disengage the webbing retention strip, however this is in large part a problem with the MP2s as the cut in the top centre could really do with being deeper; currently it is only sits at about 4-5mm which needs extending to my mind. All that said however the MP2s stay pretty firmly where they belong even if the top tabs are disengaged and it would take some serious jostling to lose the inset and/or your mag. We’re talking parachute opening type deceleration and for anyone who’s done any freefall you’ll know pulling that handle once you reach terminal velocity is like being clothes-lined by metal barrier when running at full sprint. 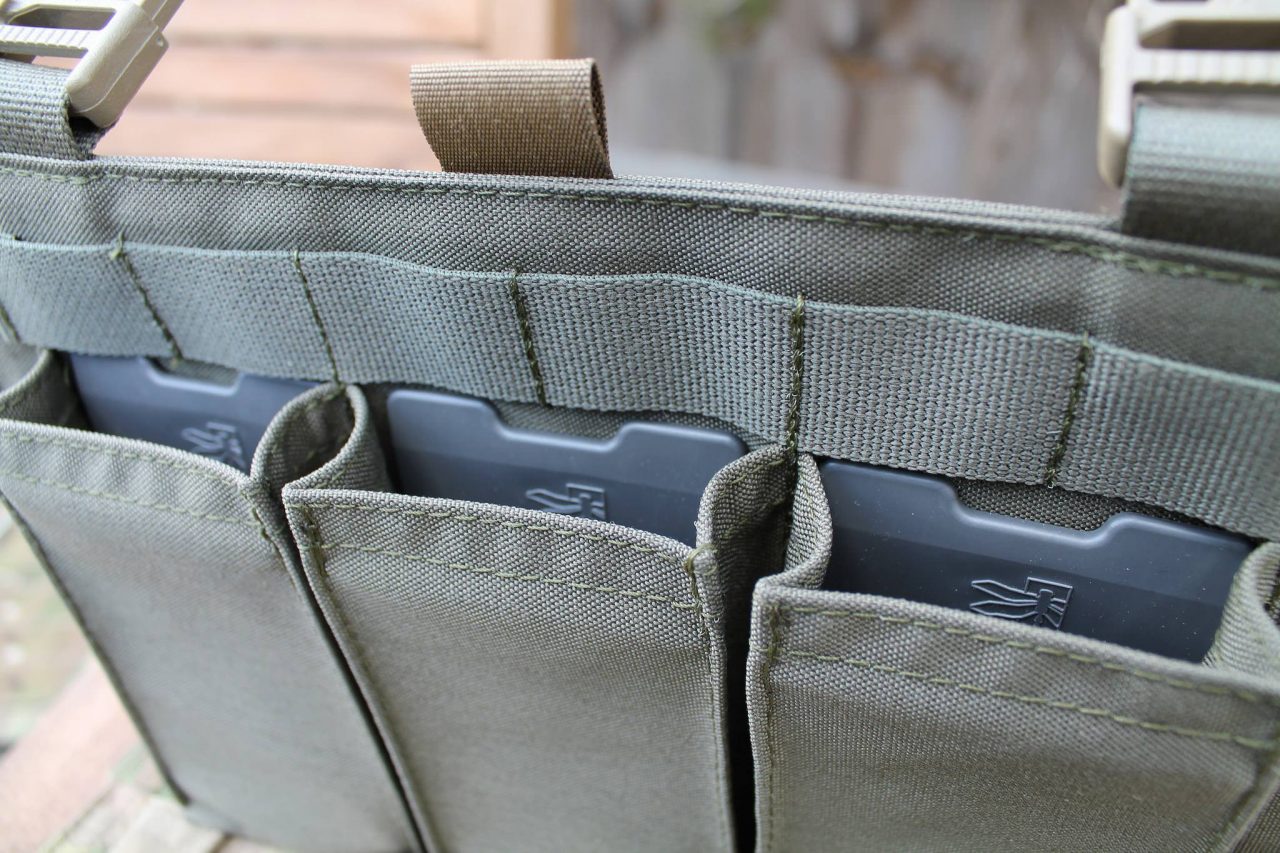 Depth issues aside, DCTN did a superb job of setting the width of the opening to each cell, as the area within which the MP2 has room to expand directly affects the level of retention it provides. If the cordura causes the two sides of the plastic to clam too tightly together you’ll never get mags in or out. Conversely, leave the plastic open too wide and magazines will wobble around all over and potentially bounce/fall right out.

A pouch that’s built to the right dimensions will allow rapid and entirely unobstructed access to magazines when needed, yet will also retain those magazines quite reliably under the majority of circumstances. With the simple addition of a small loop of 1/2″ webbing on the front of the pouch, bungee cord and a retention tab could be routed through said loop and the webbing holding in the MP2, making the setup viable for flying around in things and jumping out of flying things.

The funny thing about all this is that Haley Strategic already teased their 3-mag variants of the original D3CR chest rig they’ve been selling for years that holds 4 mags. The new 3 cell version will work as a placard like the Spiritus rig does now and though there will probably be small pouches mounted on the front of the rifle mag cells, said cells will no doubt be built just like what you’re seeing in these images that I took in March 2016.

It takes way longer for a big company to design, develop, test, re-design, re-test then manufacture and bring a product to makes en masse of course.