The video from Shoot Las Vegas is up on YouTube already, I said I’d review them and I do what I say. If you happen to go to Vegas (which is possibly the best machine gun tourism destination in the world) I have to say I think you’d be remiss to not set a little of your budget aside to check out SLV. Certainly if you’ve either never shot before or never shot full auto.

To preface this I will say I’ve spent hours pouring over other reviews of every MG rental place in Vegas and there are at least a dozen, however I’ve only been to 2 and there’s a reason for that. Of the many of reviews I’ve looked at and comparison lists I’ve read that are up-to-date, there are consistently 2 businesses topping the charts. Now personally I know I have integrity when I review things and only publish the truth, but I take reviews from any source I’m not intimately familiar with with a large pinch of salt. It’s not physically possible for me of course to physically visit every location, however after sorting the wheat from the chaff I have spent a long time looking at the websites of all the businesses who have at least decent reviews to compare 2 key attributes – pricing and selection. Location and staff are important too of course, but for me it’s about what I’m shooting and how much I’m paying, I simply expect the staff to be professional and polite and the location to be safe as a minimum. 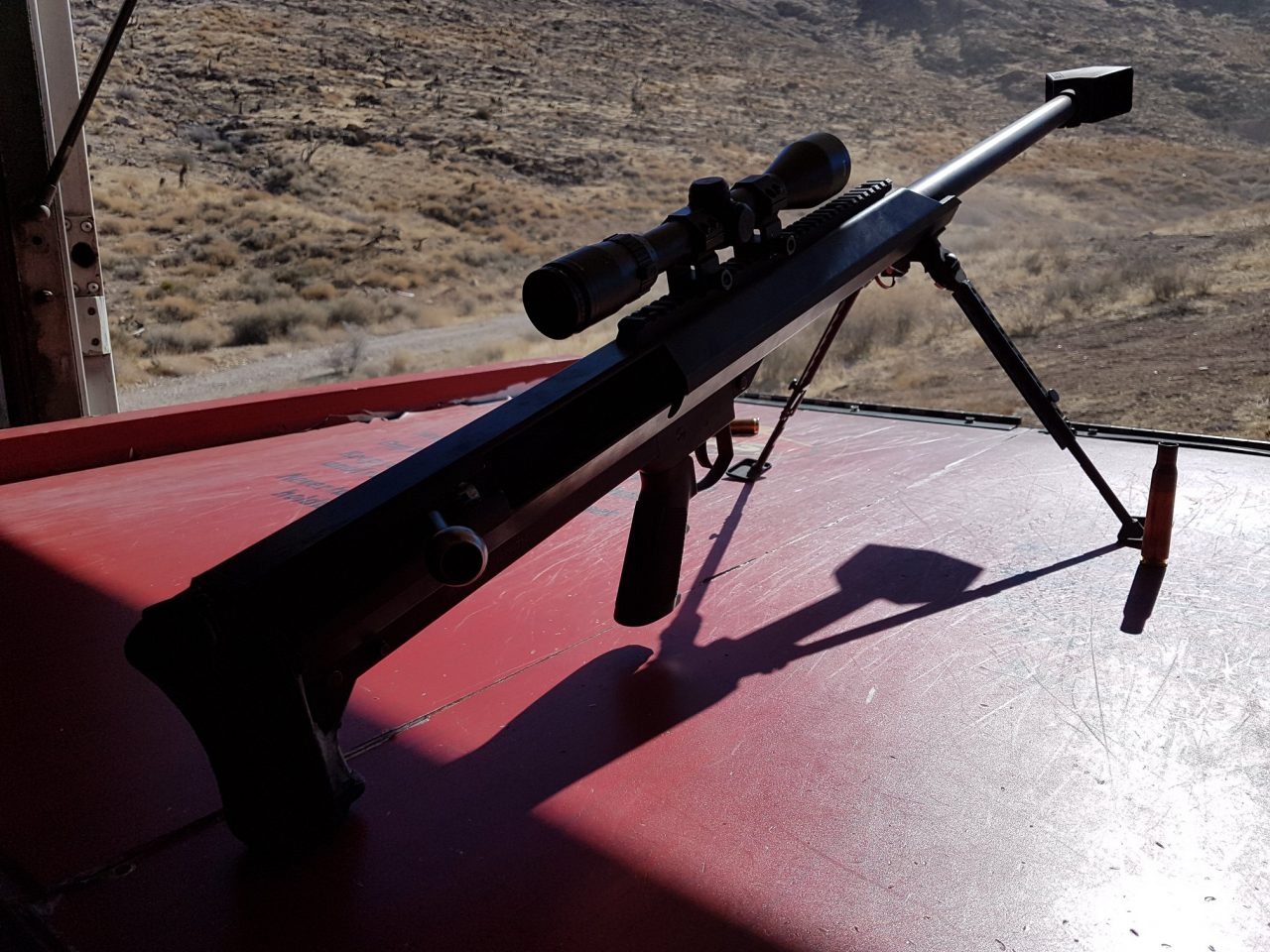 With all that in mind, many of you will know I’ve been to Battlefield before and the only competition I could find to the quality of Battlefield was SLV, so I put my money on the table, purchased a 9 gun package + the Barrett .50 and headed on over. When I say headed over I mean took a fairly lengthy drive in the yuge limo they pick you up in, because the first thing to know about SLV is it’s situated out in the mountains and valleys a good way outside of town. This is a slight double edged sword as it’s a bit of a drive, but one edge is no doubt sharper than the other. The vehicle is either about to be upgraded to an insane monster truck limo or will have been already and frankly that alone is almost worth the entry fee. Check their site to take a look at the beast, you will be impressed. If I go to SHOT again next year I look forward to checking it out in person.

The first image is the selection of 9 I picked out which I’ve discussed previously when I posted the shooting footage, so go back if you want to read what’s there/why I chose it. The location itself is, as I say, a decent little drive out of town and that’s about the only disadvantage or criticism of sorts I might have of SLV. Bearing in mind that the land around Vegas is eerily flat for miles and of course the shooting range needs hilly terrain to actually catch bullets, so if you want that outdoor experience you simply have to drive a good distance, there’s no getting around that. 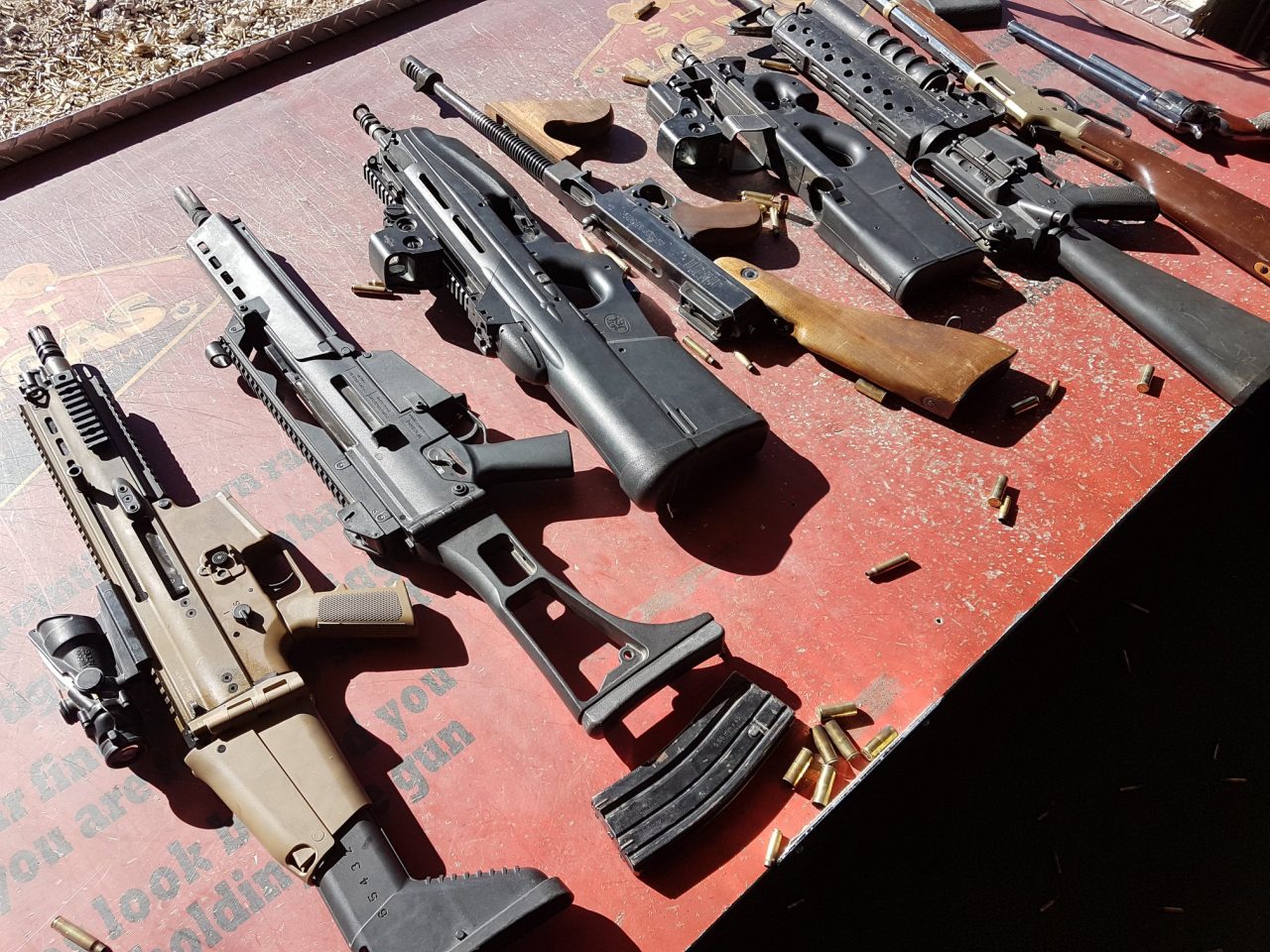 The selection of weapons to choose from will certainly please 99% of folks out there. I may potentially be in that 1% who’s already shot a lot of modern stuff and is primarily interested in much more niche/older weapons, but I still managed to pick out 9 guns I most definitely wanted to shoot to tick off my list and that’s good going for someone who’s as big of a nerd as I am. Also you have to consider the remote nature of the location in all aspects of the business, as having everything that they do in the location that they do is no mean feat.

The physical firing lines are trailers of sorts, which means you don’t quite have the 100% outdoor shooting experience, however it is the desert and it’s windy so if you didn’t have some sort of cover or hide to shoot from you’d spend a lot of the time going ‘pffff’ blowing sand out of your nose and mouth. More importantly the actual range is just straight up fantastic. You can simply blast sand if you like and honestly I think I might do just that next year as I go to these places to pay for an experience of shooting in a way I’ll never be able to in work. Safety is still crucial of course because a lot of these are automatic firearms, but as long as you follow the 4 rules of safe weapons handling I see no reason not to just aim at a large area down range and hold the trigger back. But as I say the range area you have to shoot at is superb with tons of steel targets setup. The trailer with the bolt-action rifles has target stands starting at 100 yards and then at 100 yard increments all the way to 500 proceeding up the hillside, which is a world away from anything you might get at an indoor range. Searching for those steel plates out on the sides of the hills through your scope is a hell of a lot of fun. Personally I also find the scenery just awesome as it’s totally different to almost anywhere in the UK. 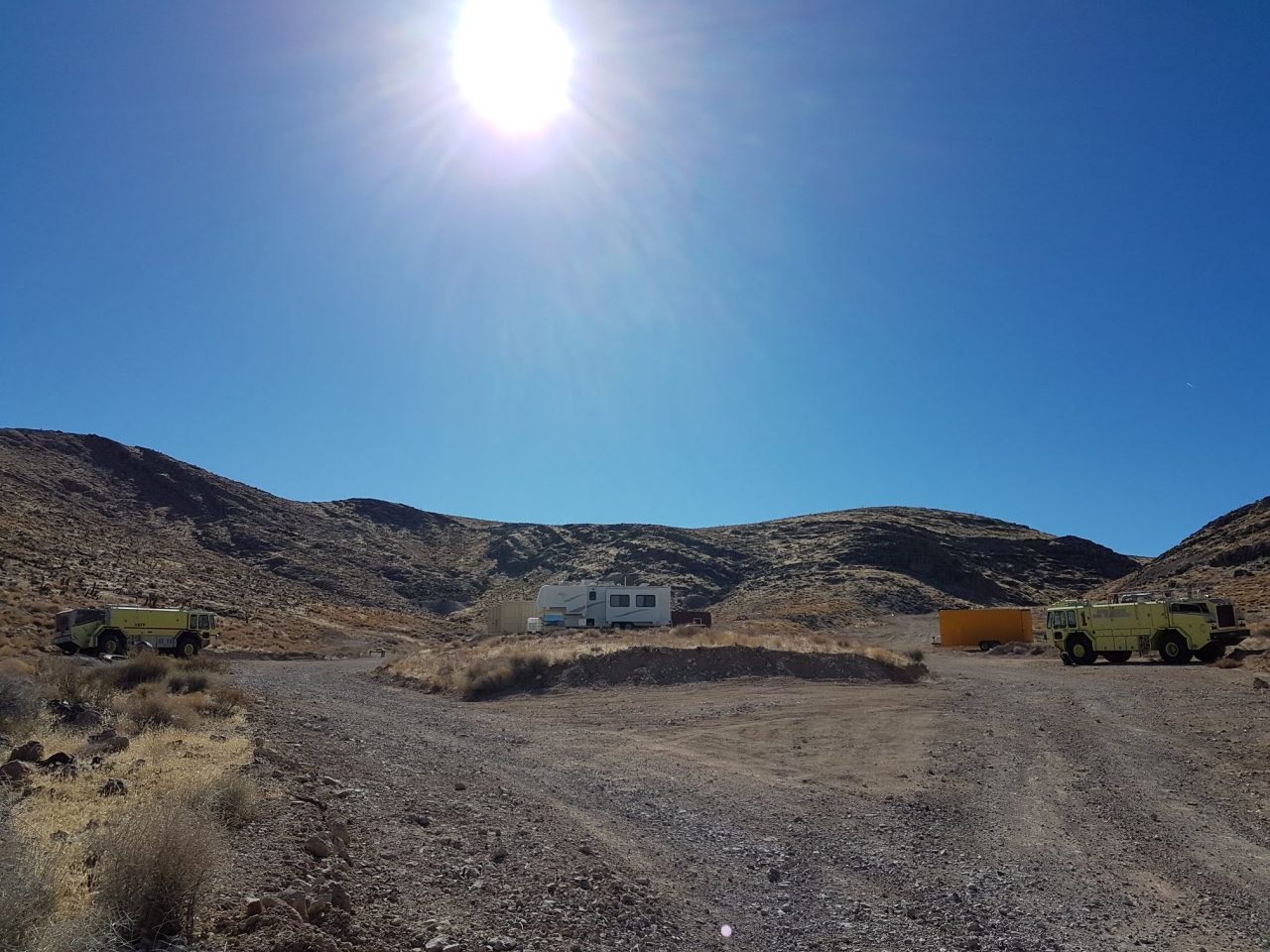 Most crucially, all the guys I met who were running the place were absolutely faultless. Professional, courteous, yet highly enthusiastic when it comes to safely enjoying the shooting experience and making sure you have a bloody good time at their range. The time does go quickly there’s no doubt and as I’ve often said with machine gun tourism it’s a crazy ratio of dollars per second of entertainment, but you have to understand that going in. That’s simply the nature of the beast. 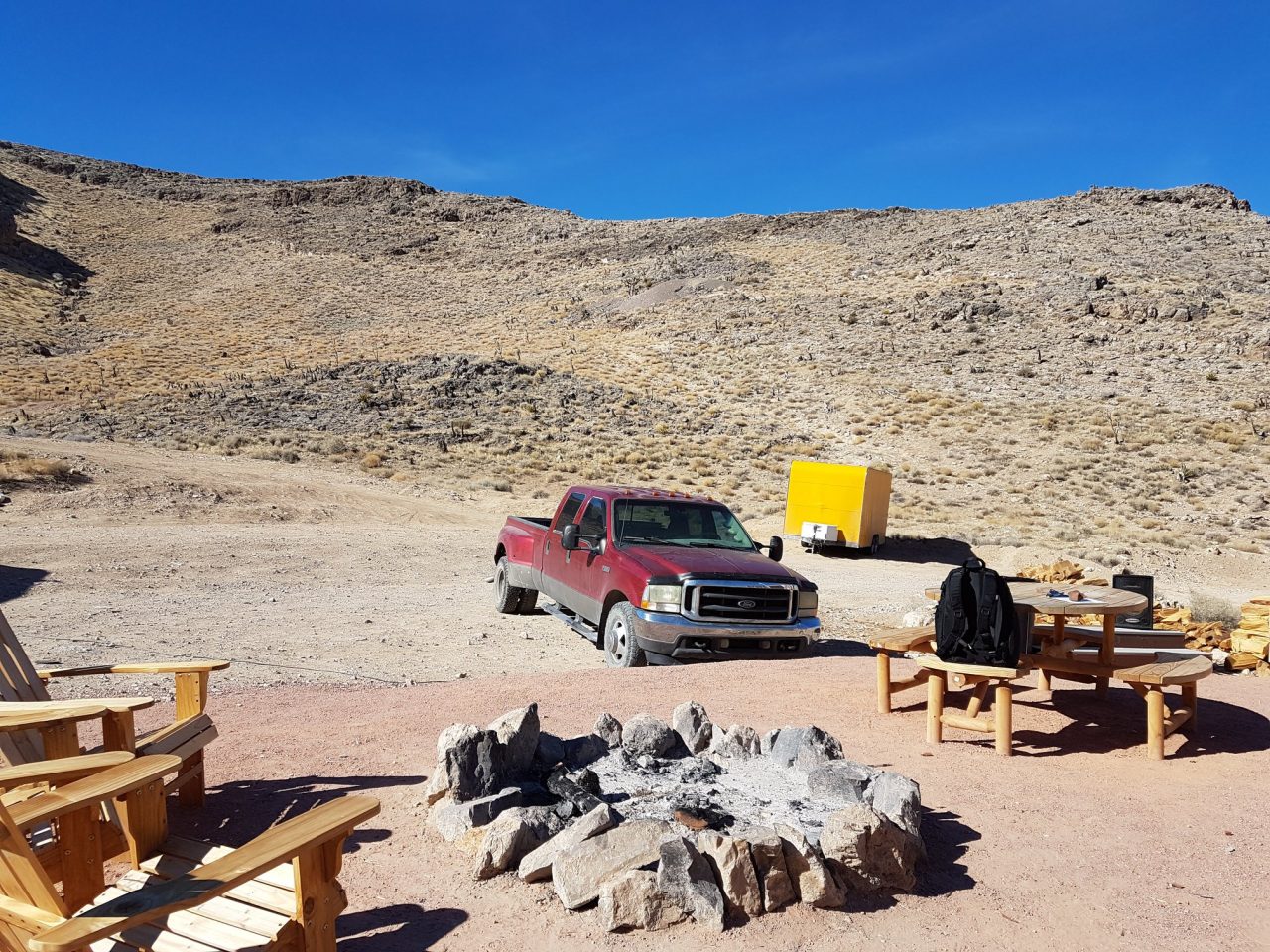 Pricing wise I can tell SLV have set out from the start to really be the tops dogs. Not only is the basic price per gun/round extremely competitive, but you’ve got your limo ride included, they have have video cameras setup to get the down range angle no human could ever record, you’ll get a 50 cal case cut in to a beer opener at the end (hand made from a round shot on their range) and honestly just the entire feel of the location and the setup they have going is a huge plus point; lots of other little details too. To circle back to something I mentioned at the start, I’ve spent a lot of time comparing prices and weapon selections of different MG rental places in Vegas and SLV beats most of them in a simple price per round match, yet also throws in a boat load of extras the competition simply do not (or cannot) beat.

Overall it’s an easy 9/10 from me, maybe a tentative 9.5, just because nothing in life is perfect (but they get close). Getting hold of the guns I’m personally really in to like genuine Stg 44s etc is of course a seriously big deal and I’m not deducting points from SLV for not having all the WW1/2 era guns I’m most interested in, but sufficed to say if they did have all that stuff I’d never go anywhere else. If anything the only other minor nit I could pick here is that SLV will massively spoil you in terms of shooting experiences and almost anywhere else you might try will be lacking by comparison. I genuinely hope any of you who might read this and subsequently find yourself in Las Vegas will put this company at the top of your list, because end of the day what I care about most is folks getting the best they can from their money and this business right here is the one to go with.