When it comes to SHOT show, the good thing about quality manufacturers who haven’t been around for all that long (comparatively) is you know you’ll find something genuinely new at their booth.  Spiritus fits those criteria and in my time running the Facebook group this past year I have consistently seen a clamour for back panels to be available for the Overt plate carriers, so I wanted to put out some details on the new Assaulter Back Panel that’s coming this year as part of the LV119 system, as well as briefly discussing some other new offerings.

The ABP name pretty much sums it up, but if it had been called the Breacher Back Panel that nomenclature could fit nicely too.  Folks at Spiritus have been trying out their prototype products while attending courses at the Direct Action Resource Centre, a training facility/organisation that is well known for offering some of the all around best and most challenging training to police and military within the realms of counter-terrorism and breaching tactics and techniques.  I am no door-kicker myself, but I’d like to take this opportunity to go over as much as I know with regards the features and construction of the gear in order to hopefully help out the real action guys with their purchasing options and decisions.

Starting from the top we have the black locking zip that interfaces with the upper edge of the modular/detachable part of the panel and also doubles as the closure for the main stowage compartment of the bag that sits directly against the rear plate.  This primary compartment is definitely set up nicely for stowing breaching tools like bolt cutters and the space extends all the way to the bottom of the tail/extension you see below in the left of the shot.  In order to stop the handle on your tools bouncing around the black zip has 2 slides that attach outboard at either end and once you move them inwards and set them in the right spots to secure your tools/charges etc the sliders will not move, not until you deliberately pull on the cords.  As is visible in the picture the bottom of the panel is also structured and reinforced creating much more space and strength than if it were a simple sleeve that came to a point.

I’ve seen 3 options for the modular part on this upper area of the back panel so far: a simple laser cut PALS grid, a GP pouch along somewhat similar lines to the Sack Mk3 as well as an even more modular option that is vaguely analogous to a single cell Micro Fight.  I’d imagine just about every possible configuration an assaulter might ever need can be catered to within these offerings.  All 3 also have pass-throughs, which are depicted a little further down in this post. 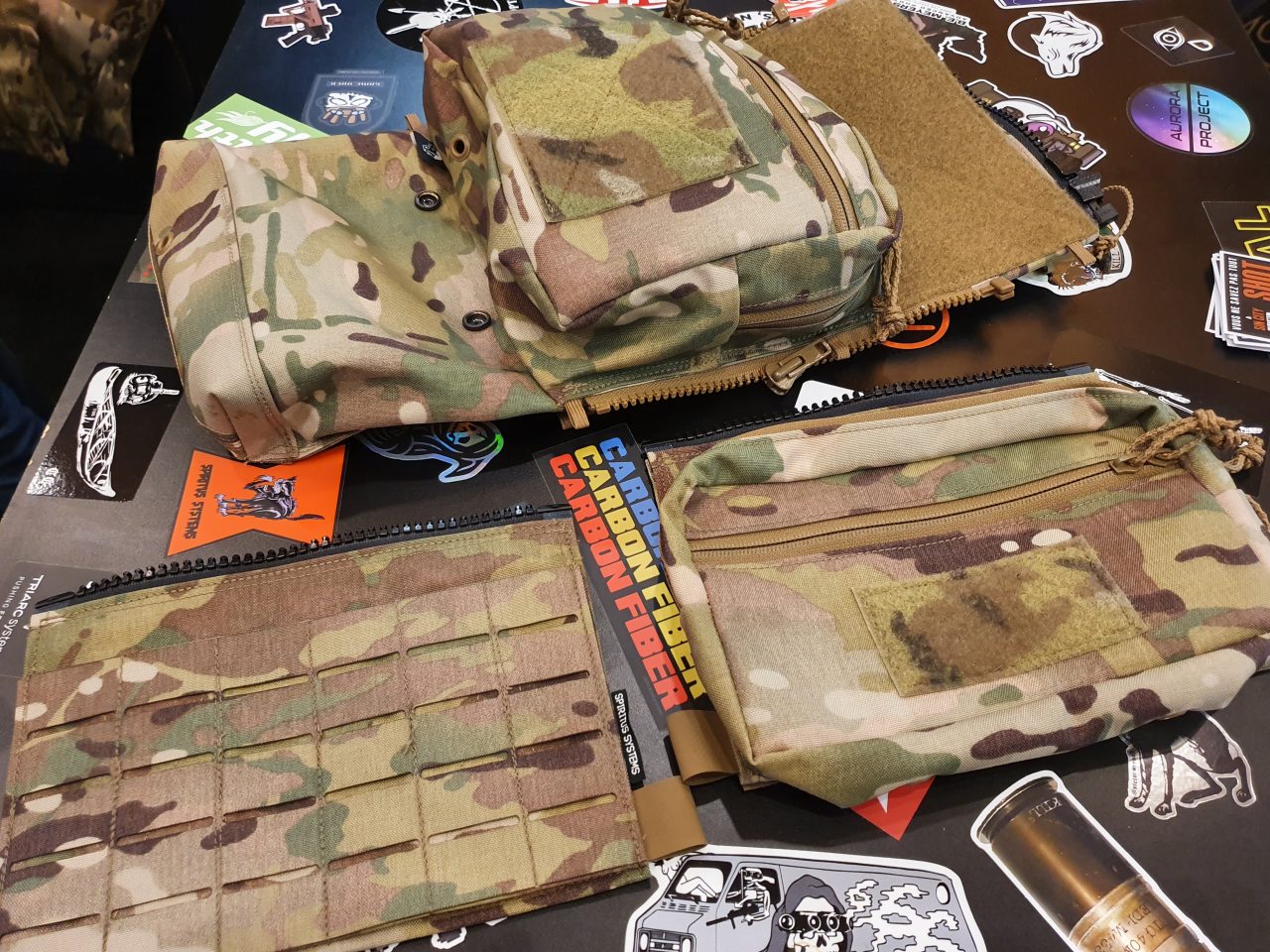 When you don’t need the extra room of the extension to the main compartment and don’t want the back panel to hang down below the bottom edge of your rear plate bag, you simply turn it back into itself and the built-in press studs get snapped closed.  Also shown here are the 2 drainage grommets built in to the permanently affixed GP pouch section of the panel. 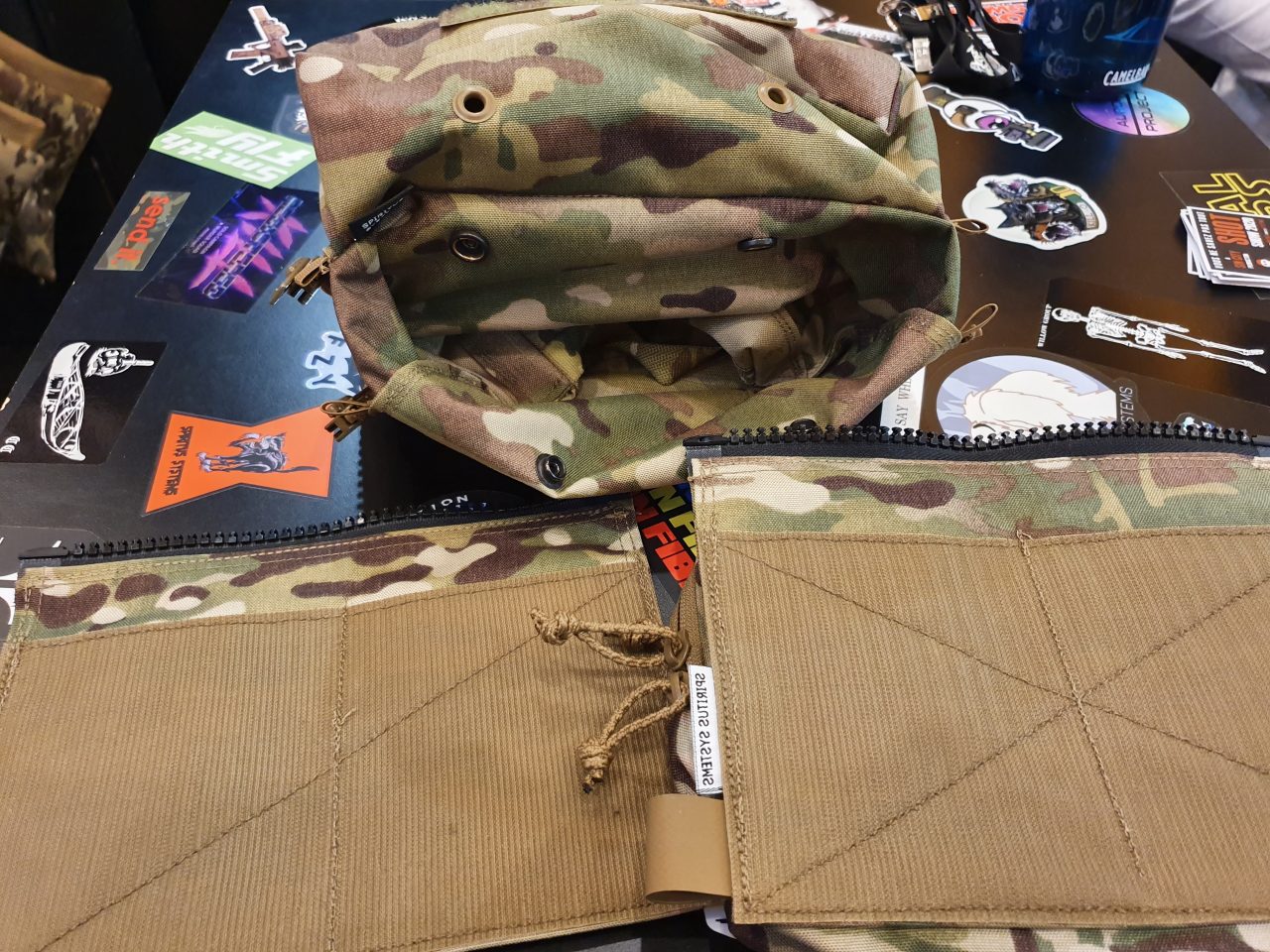 Another headline feature to the adaptable nature of this panel is the primary zip mounting along the sides.  There are actually 2 zips on both sides, which has been initially confusing for a lot of people (myself included) as at first glance it can appear as if they are intended to link together, but what they really do is allow for a second way to adjust the capacity of the main compartment of the panel.  In the image below the outer zips of the Assaulter panel are connected with the rear plate bag, pulling the entire panel in tightly to the plate and compressing it.  If the other set of zips are used (end of one is highlighted below) the back panel is free to expand out and away from the plate carrier.  This means that both the depth and length of the main stowage area can be tailored to fit mission requirements within a matter of seconds; only the width is the fixed.

Also visible below are some small loops that look like paracord pressed flat, which are intended to store linear charges and I’d imagine they could perhaps be used for some potential tying up of comms wires or just as general lashing points for any small items (I reckon we’ll see rolled up flags on these in short order).  Lastly you can see the pass-through that happens with the removable upper panel, between the pouches and black locking zip, a dummy breaching charge has been fitted here for demonstration of such.  When you don’t need to store anything in this area it will seal up fully with hook and loop. 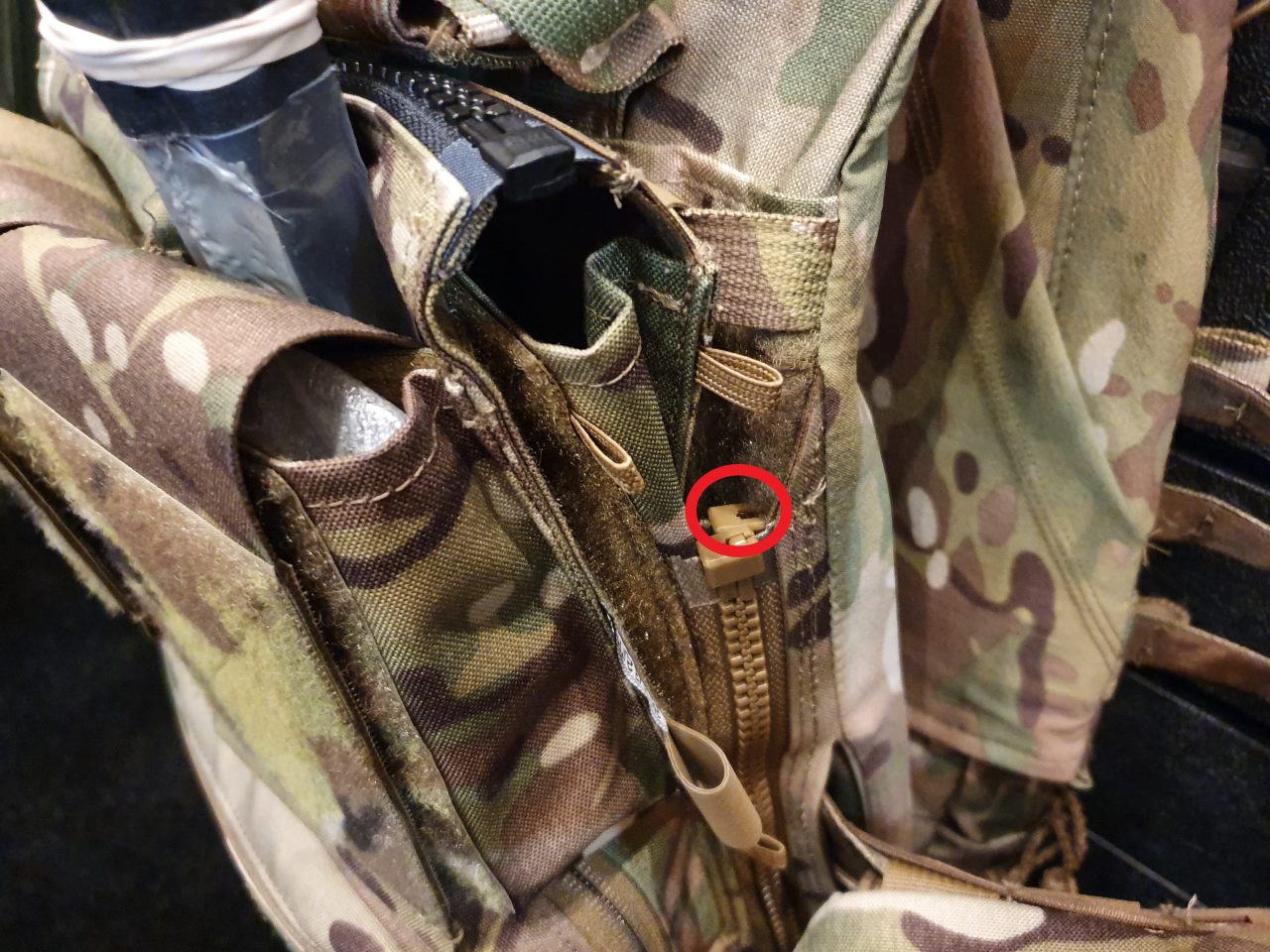 On the very rear face of the panel we see the additional security for attachment to the Overt PC rear plate bag.  The 6 press studs on short hypalon straps will interface with the sparse quasi-PALS on the rear of the Overt and of course the hook shown here will stick to the corresponding strip of loop.   The side zips are oriented such that when attached together they are working with gravity to stay securely fastened, so if an expedient mounting of the panel without securing the short straps was necessary I would still have every confidence the panel would stay attached with only some minimal potential movement, even when carrying relatively heavy equipment like pry bars, short sledges or gas cutters etc. 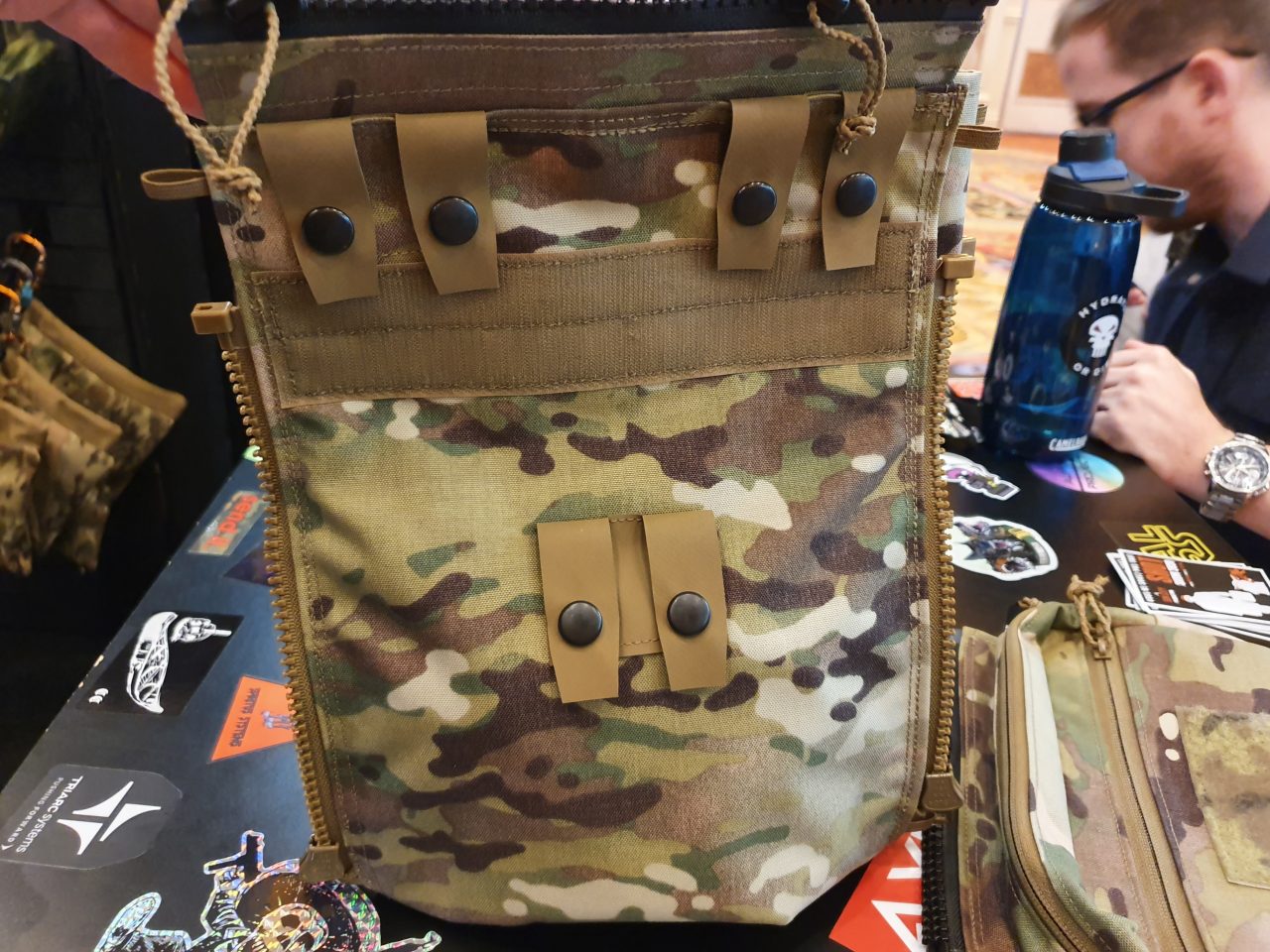 Standards of construction are of course very high as you would expect.  The main body is proper military spec 500D cordura, the zip pulls are the posi-lock cord that many of the best manufacturers are currently moving over to and the main zips themselves are heavy duty vislon type YKKs.  This is an important note for a zip that isn’t always mated up in the way the integrated pocket zips are, because a damaged section on a regular coil type (as seen on the fixed pouch) will render that closure inoperable at the break point, whereas a broken plastic tooth on one of the heavier types can simply be cut away with a knife and your panel will still be good to go.  I was slightly surprised at the usage of the metal snaps as I’d expected perhaps velcro or straps with tuck tabs, which would shave a few grams, but usually with these things they are a specific outcome of some field trials and experimentation that I am not personally aware of.

Pricing wise, the ABP will likely be starting with a 2 and that’s not surprising given the significant complexity and amount of sewing hours that will need to be put in to make each one.  I would presume upper modular panels won’t be included in order to keep things in line with the infamous Spiritus à la carte ordering system i.e. you buy exactly what you want – nothing more or less.  I have also heard there are potential plans for much simpler PALS only/hydro panels coming down the line and those should be a lot cheaper and answer the requirements many Overt owners have, but no doubt this panel l will have been the more pressing need for various units and agencies doing important work so it will be getting manufactured in quantity before anything else.

The other big announcement that has had people talking is the new sling line that’s being done in co-operation with Sierratac.

A lot of people have been losing their minds over these for some unknown reason, as if more options in the market place are somehow bad for the consumer.  Are they a total revolution in a quick-adjust 2 point sling?  Not really, no.  Will they be a simple, effective and reliable way to retain a rifle on your person?  I’m confident they will.  As you can see below these will also be offered in the full and extensive range of colours and camo patterns that Spiritus is renowned for producing in the line of Micro Fight chest rigs.

The basic construction is from 1″ webbing, with a lightly padded section that steps up to around 1.5″ and is wrapped in cordura, with both of those materials being pattern matched on all variants.  The design sit somewhere inbetween a simple webbing sling and a wide and thickly padded design like the padded MS1 and BFG Vickers.  There are plastic tri-glides at each end to either mount directly or allow the addition of any sort of QD, paraclip, HK snap, U-loop, paracord or any other piece of sling hardware the user prefers and suits their weapon system.  Inbetween the pad and the adjustable sections there’s a metal tri-glide for the webbing to run through.  There is no loose tail in the design, which means the range is adjustment is smaller but you never have an uncontrolled webbing strap just swinging in the breeze. 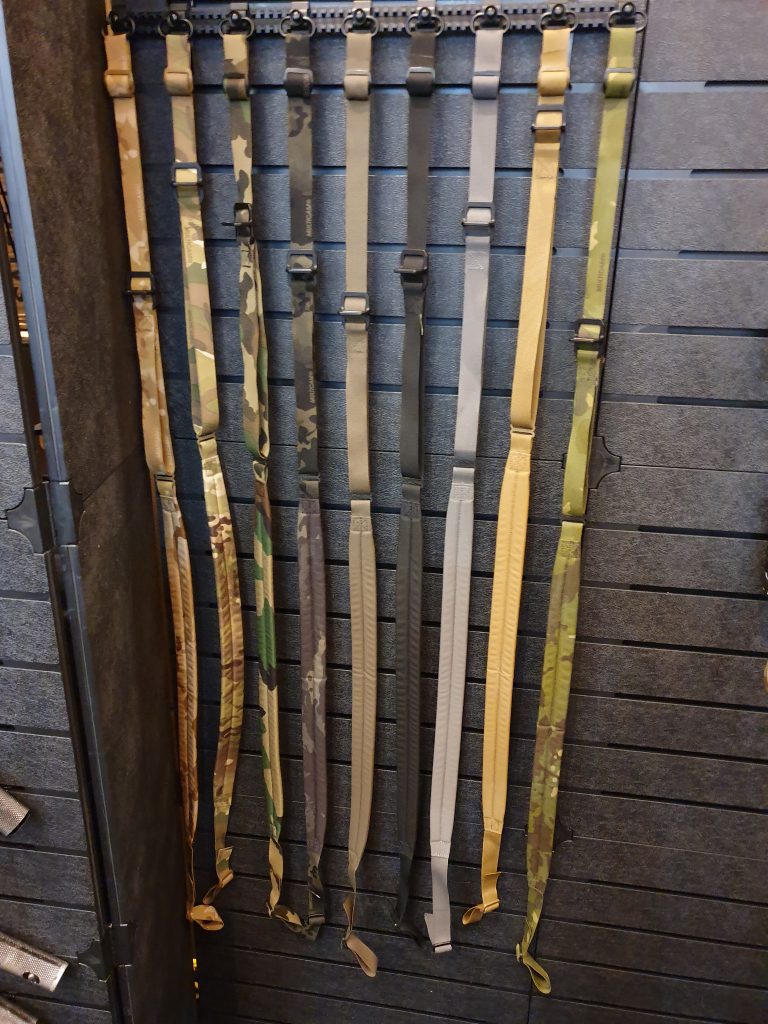 The key feature with this sling design is the Sierratac slider.  It is a single solid piece of machined aluminium and the big seller is how easily it slides when adjustment is needed.  It runs along the webbing extremely smoothly, much more so than any of the various other slings I’ve personally tried over the years.  The idea behind the design of the slider is that any weight applied to the sling will lock everything to place to prevent unwanted movement.  I have read both positive and negative reviews of this hardware, so it’s certainly something I’d have to try out for myself before I formed any solid opinions. 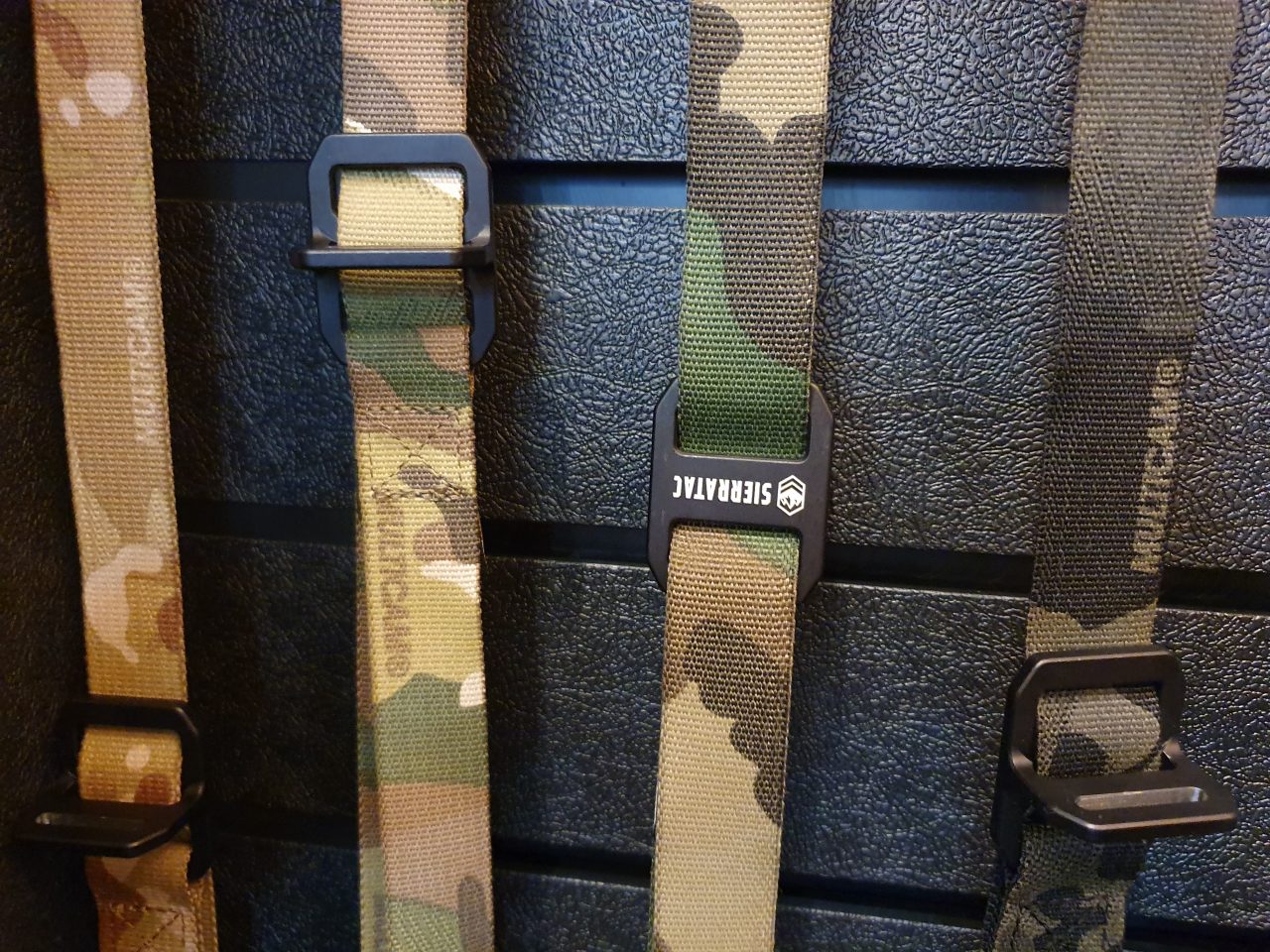 Also at the booth was this unique Overt plate carrier in MC Alpine with a full set of matching Assaulter panel, Sack, GP pouches, sling and an unreleased PALS placard with some sort of very unusual magazine carriers. 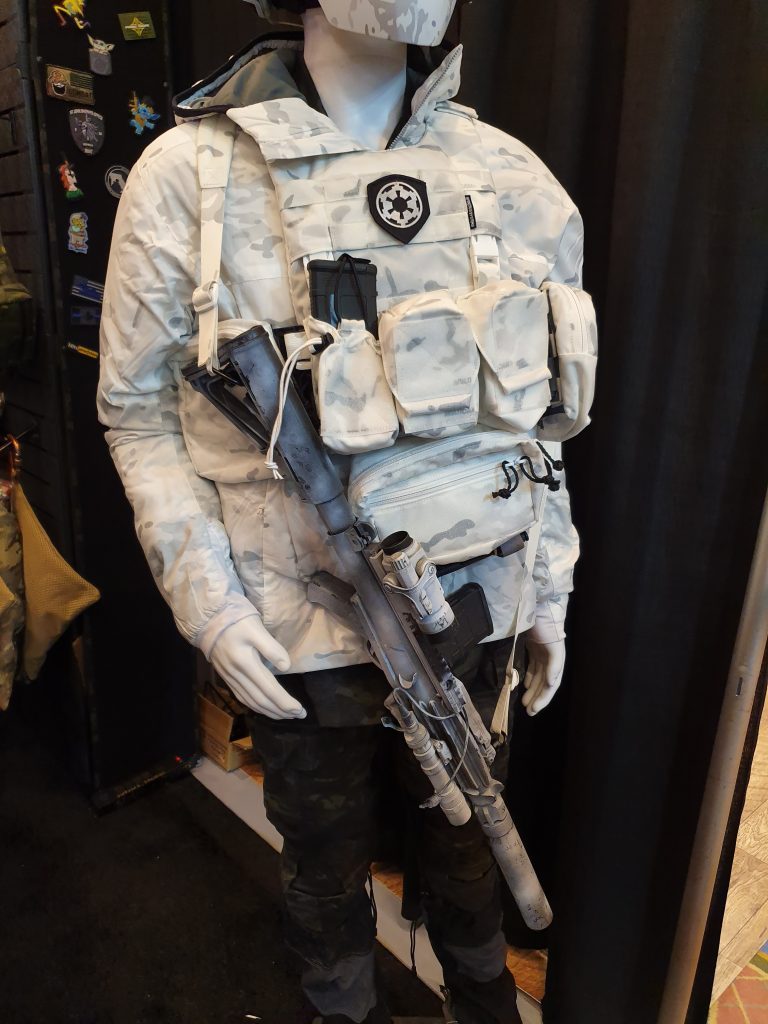 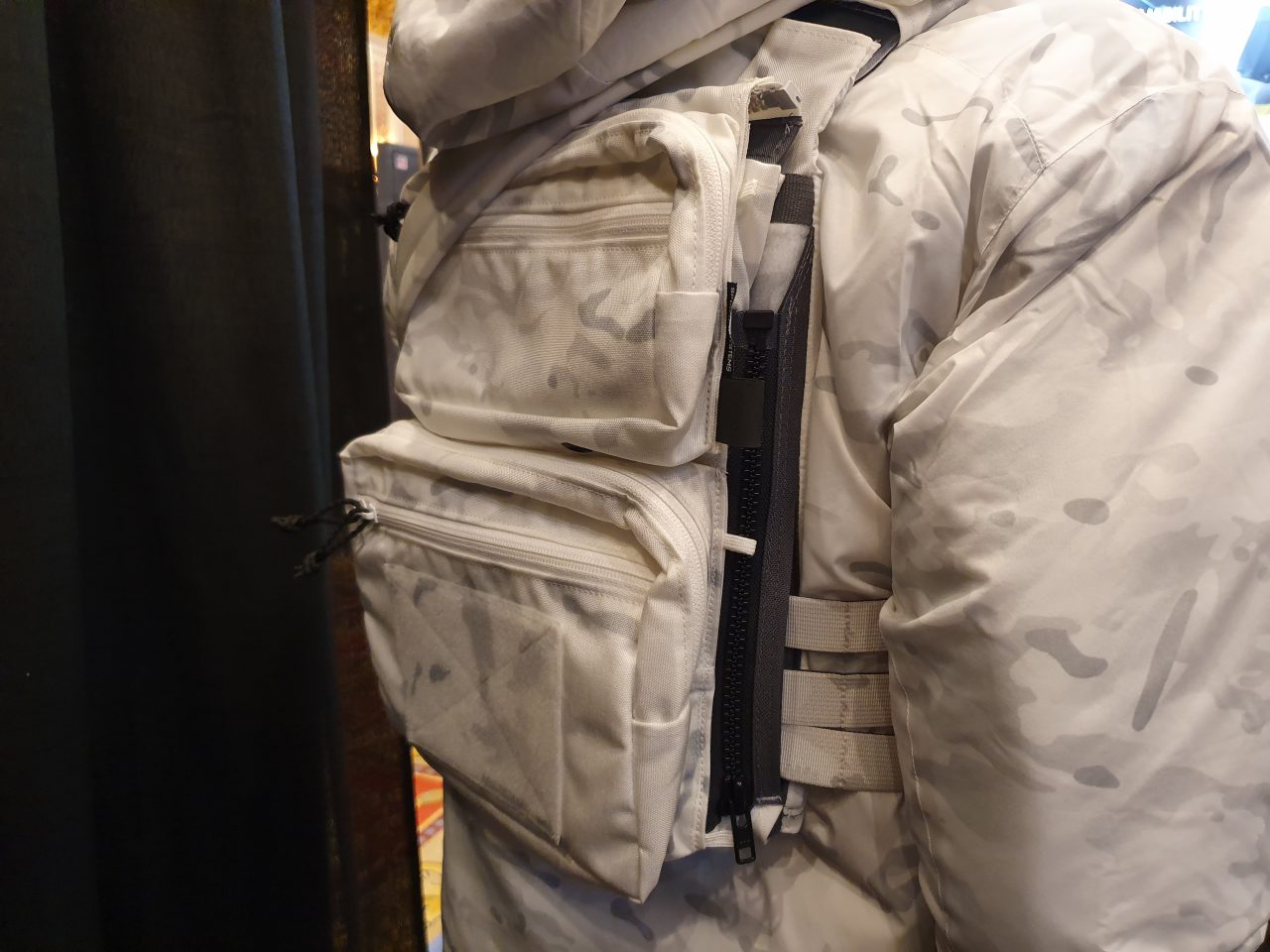 Lastly I had to include this shot of the Mk4, fat straps, half flaps and sack that are all showing off the newly introduced US Woodland webbing and loop materials for a full colour match in the WCP options from Spiritus. 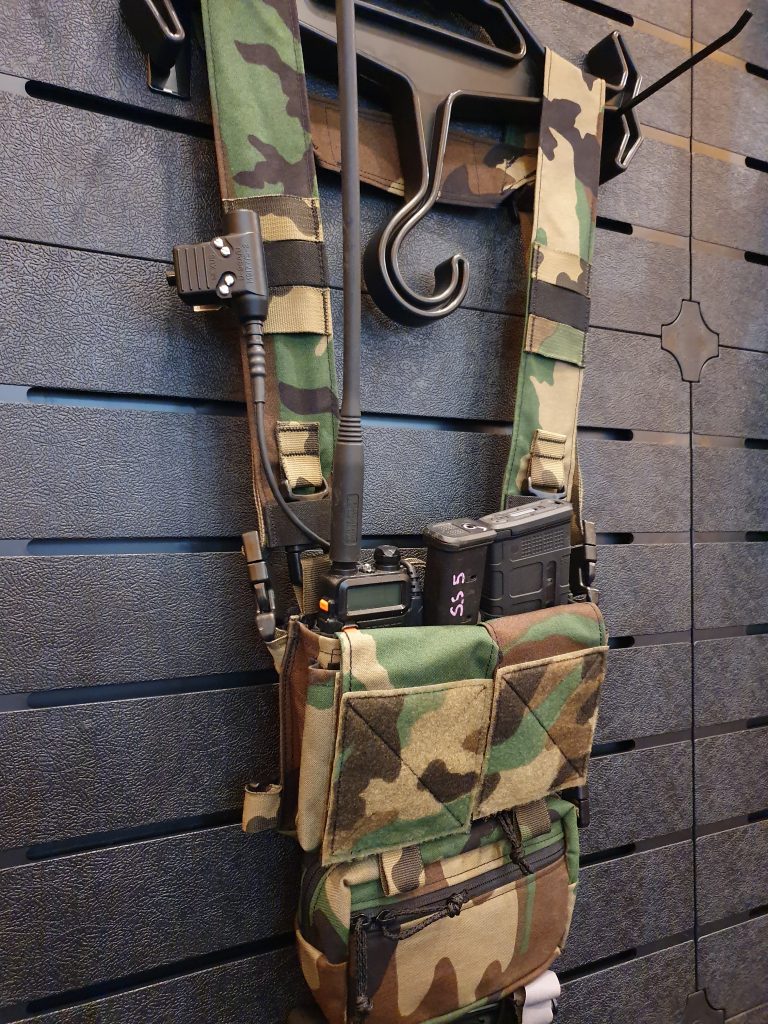