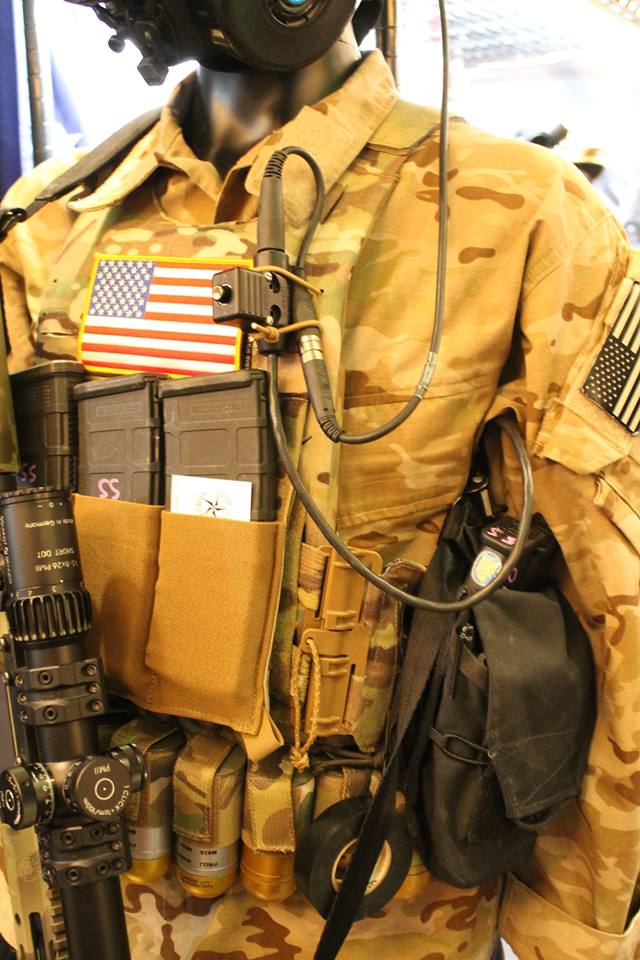 Since we’re on a Tubes-related roll, the natural next move is to discuss the Spiritus Systems​ plate carriers. All 3 variants were on show at the MTEK​ booth for what was the first time I’m aware of. Irony is of course they revealed the super slick No-Vis variant well over a year ago and I completely missed it, as did probably many others, but then they didn’t have tactically styled offerings at that point. I’d imagine the main fabric construction may have changed since that time as well, just a guess though.

Looking around I’ve not actually seen a write-up on these so far, but either way let’s break down the 3 versions.

Like the original NV-119 completely slick variant and I do mean completely slick. The cummerbund even Velcros on at the sides instead of on the front of the front plate bag to truly minimise the profile when the PC is hidden under clothing. Better than the LVS? Certainly could be a contender, but that’s for much cooler dudes than me to decide.

As you can see in the picture there is a slot sized for a radio or a couple of mags in the usual place at the edge of the front plate bag (both sides behind the cummerbund), but that’s about it. The stock cummerbund is just plain elastic for the minimum profile and to keep the plates tight to the body. I’d imagine the Bank Robber style will also be an option, maybe even the full on PALS compatible side panels given the famed Spiritus modularity. 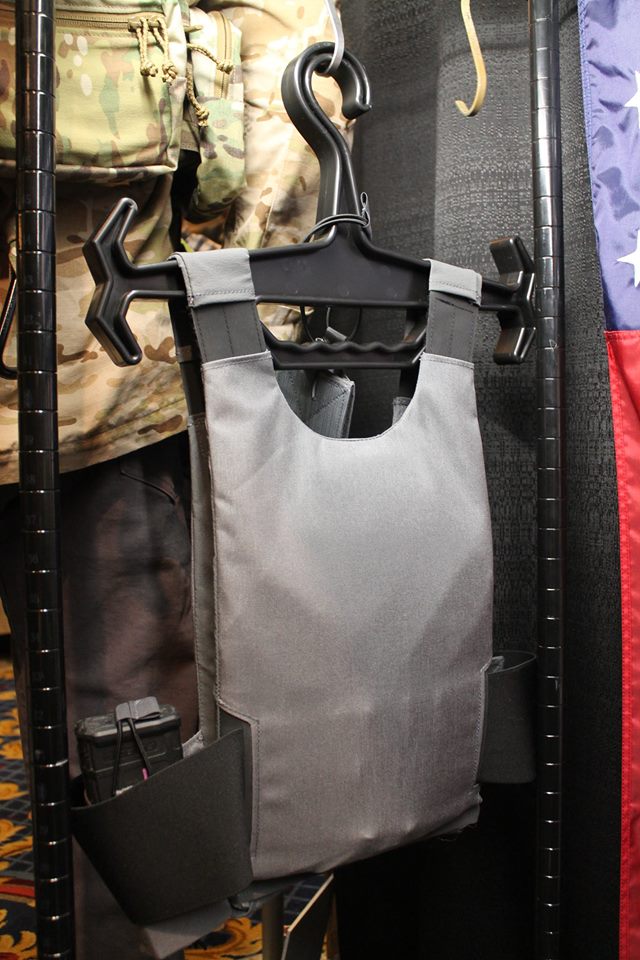 Taking one step up, the next thing one would want after plates will of course be some small load carriage capacity, generally at the front around the abdomen area. Primarily for magazines of ammunition, but if you were to opt for mounting the Micro Fight Mk3 the possibilities are pretty much endless and of course there’s no shortage of compatible placards on the market at this point. Apologies for missing pictures of this model as I clearly got too chatty at the booth, but you can see it here – https://tinyurl.com/yc8osvnp

At this mid level you gain the ability to attach either the Micro Fight or other VelSys spec placards using 1″ buckles, or alternatively the new Spiritus placards. These can be seen on the Tactical carrier being worn by the mannequin. They work much like Crye AVS placards in that there are tails of fabric covered in velcro coming off the top edge which are secured inside the front of the front plate bag. However unlike Crye armour that velcro goes up in to the chest area vs looping back down behind the placard. Consequently the weight is supported higher up and with the way hook and loop works you should gain a little more strength of attachment, as well as absolutely minimising any small potential for the mounted equipment to sag forwards. The webbing loops that allow for attaching 1″ QR buckles can be hidden away behind a horizontal cut in the fabric, just like the JPC 2.0.

I don’t have a picture of the back of the Low-Vis either unfortunately and I can’t fine one online, but you do gain a small loop field on there (colour matched of course) and potentially there are slots for the Spiritus/Direct Action Resource Center LLC​ Rescue Handle, though apologies again I can’t recall if that is the vase. No facility for zip on back panels and no PALS compatibility on the rear either.

As far as I cold gather naming convention on this model hasn’t quite been finalised, but once the line releases in the next couple of months (hopefully) I’m sure we’ll find out. Zane who’s the Co-Founder and CEO of Spiritus was kind enough to talk me through primarily this entry in the line-up, since it has by far the most features to talk about. 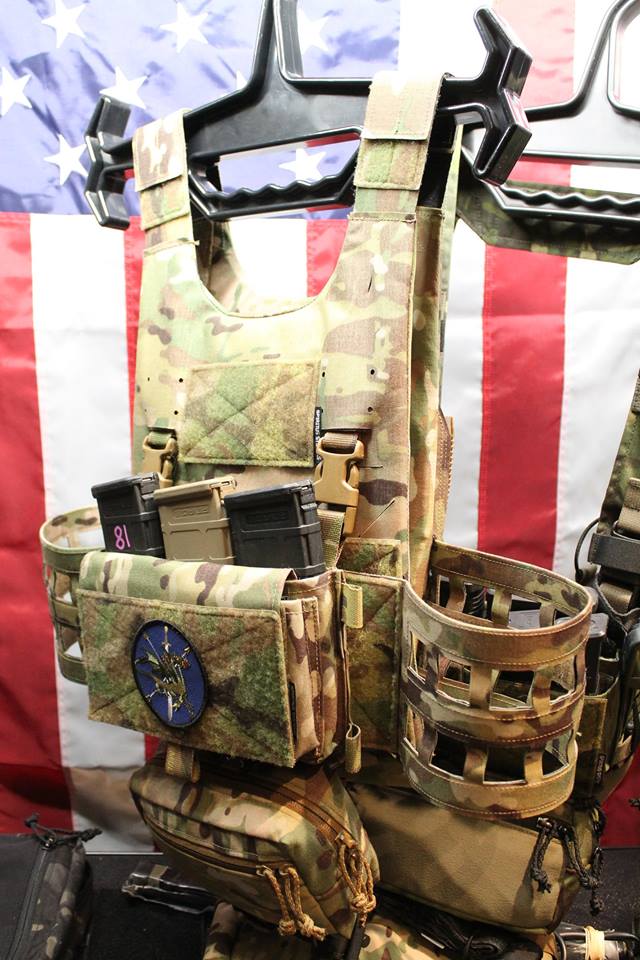 I’ve covered the placard mounting already and that option of course is exhibited at this top level carrier, but let’s talk fabrics at this juncture. The Spiritus PCs are not just 500D cordura, they do use 500D however it is laminated to/backed with a fabric that’s very new within the tactical gear market. I’m afraid I don’t know what it’s called, what exactly it’s made of or any real in-depth specifics. What I do know is it’s more like a plastic whereas hypalon is a type of rubber, meaning it’s much better for laminated applications and laser cutting vs hypalon. It will melt and bond with the cordura whereas Hypalon will not. I’ve only ever seen this fabric in black, which is why companies laminate it to 500D cordura, which is of course available in dozens of colours and camo patterns. The biggest selling point probably has to be the strength though. The mil-spec standard bar-tack on traditional PALS will, according to Zane, by design break away at around 250-300lbs. Spiritus have apparently tested the load bearing through slots cut in this fabric and the force applied needs to be more like 650-700lbs before a break occurs.

Now, personally I reckon I’ve seen this new wonder fabric already on the latest models form C2R-Fast​ and you can see those pictures with some other info in my DSEI coverage from mid 2017. Whether it’s the exact same stuff I could not say for certain but the properties described certainly line up. I’m also not 100% as to whether the same fabric will be used on all variants, but it would likely be a safe bet. 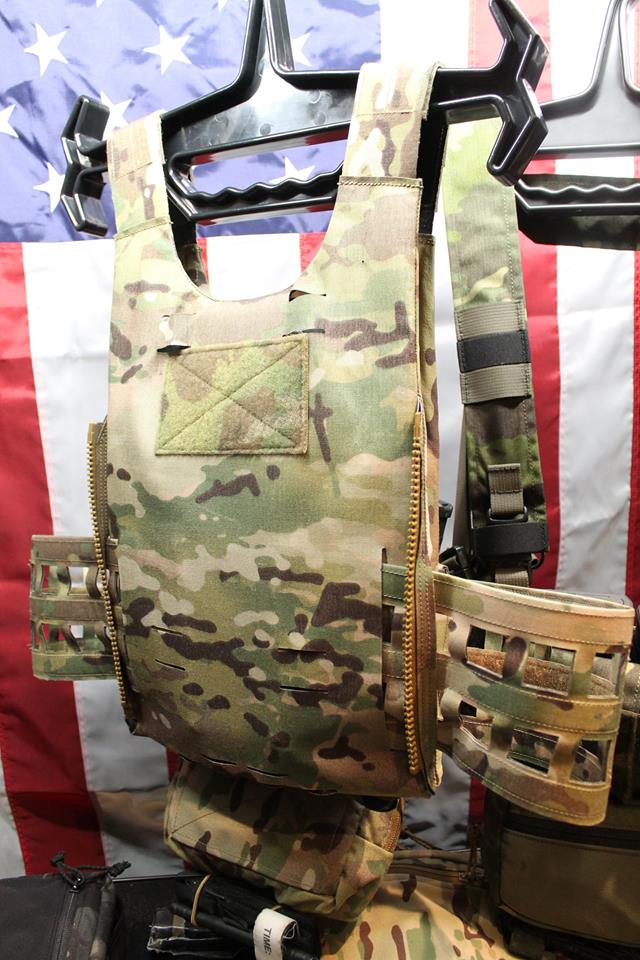 As for cummerbunds the aforementioned slick elastic and Bank Robber styles should would with the Hi-Vis PC and there is of course a full skeletonised type available for mounting any PALS pouches the end user would like. It’s somewhat stiffened horizontally on the inside (presumably with plastic) and as is shown comes in at least 2 variants; standard hook and loop closure or (!) FirstSpear​ Tubes. That feature alone made this rig go from outstanding to bloody excellent in my personal estimation. Also note the webbing loops to attach the male Tube portion tuck away inside the front plate bag as you can see there on the mannequin. The cord used on the Tubes isn’t quite the standard, it’s a textured type that I’ve only seen previously on dinghies and windsurfing kit, so the grip in adverse conditions ought to be more than adequate.

Also note on the front of the PC there are circular holes for bungee to attach PTTs or route comms and hydro directly astride the (naturally) colour matched loop field on the chest. What the diagonal cuts just barely visible behind the placard are intended for I don’t yet know, but hopefully Spiritus will be able to answer that down the line. The insides of each plate bag appear to be tweave much like the insides of a JPC, but again that’s just an educated guess on my part based on handling a few different fabrics over the years. Back panels again I’m afraid I’ve little information on right now, the zip specs are apparently proprietary which is a shame, so hopefully there will be one panel just for hydro then a couple of options for hydro/breaching tool + GP space and mag pouches or some type of grenade pouches. All the usual configurations that different end users will be looking for.

I’ve got no info on pricing at this time, the mentions I’ve seen to availability talk about a release around end of Q1 and the rigs on display certainly don’t look incomplete or in any way like prototypes. The much earlier NV-119 I linked near the start of the article was apparently priced very cheaply indeed, but given the fabrics used here and the stitching quality I’d not be at all surprised at $300-350+ for the Hi-Vis/Tactical variant. That’s as a package with a cummerbund anyway, I also fully expect Spiritus to list these on the site with all the actual plate bags, cummerbunds, placard and back panels all broken down completely separately and no doubt there will be other small accessories coming along with the release.