Produced by the most ironically named gear brand around for Law Enforcement applications; the Full Dexterity Tactical glove is ‘the glove’ you’ve seen everyone who’s anyone in the shooting world wearing in recent years.

To illustrate a point about the dexterity these gloves afford the user, I’m typing this paragraph on my laptop while wearing a set of Gen 1 FDT-Alphas.  I’m having to hit backspace at a slightly higher rate than usual, but that’s more due to decades of keyboard usage while (obviously) not having gloves on.  If I were to do this all the time, the gloves wouldn’t interfere at all with my ability to hit the keys I intend to hit.  If I were to try the same thing using a lot of other tactical glove options, ones which don’t fit as snugly and aren’t as neatly tailored around the fingers, I’d struggle significantly.  It’s not that you’ll ever likely need to type anything in a situation where you also need to be wearing this type of gloves, but messing about with buckles and snaps on gear, or buttons and controls on radios/illumination devices/NODs, isn’t all that different in a tactile sense.

Your mileage may vary, but personally I’ve observed a couple of distinct ‘eras’ over the years in terms of the universally popular choice regards these types of gloves.  As the slightly more seasoned among you will know, it’s only in the past 12 years or so that this huge aftermarket in all sorts of tactical nylon has sprung up; previously there was the stuff the military designed and issued then sold as surplus… and that was about it.  Comparatively speaking, this was bugger all tactical kit being made by anyone other than companies with military contracts.  ‘The’ glove in early 2000s (and probably earlier) was the US aircrew issue Nomex flight glove, which a few companies like Blackhawk (#throwback) got in to copying once that aforementioned non-issue kit market began to really take off.  They weren’t terribly robust, but they were thin enough to do all the things you’d need to with regards running a gun/comms/NVDs etc.  If you look back, the design principal of that glove was not all that different to the FDT-Alpha design, it was a natural leather on the palm side with synthetic material on top, designed to be close fitting with minimal bulk.  No real intentions of insulating your hands against the cold, originally issued as part of an aircrew flame-resistant ensemble, but commonly adopted just to stave off a few of the annoying nicks and cuts your hands tend to accumulate over time when you don’t wear gloves.

After the nomex flight glove, there was a dark age where the infamous Oakley Factory pilot/Assault glove with carbon fibre knuckle was all the rage.  This was around the time everyone and his dog started wearing multicam, since it was one of the very first commercially available camouflage patterns that was designed for, but not widely issued by, western military forces.  The Oakley glove offering had a decent mixture of leathers and synthetic fabrics with fairly good dexterity provided by the fact it was constructed from a lot individual pieces.  Relatively thin materials were used throughout along with air ventilation holes that made it suitable in warmer climes.  That said, the construction quality just wasn’t there a lot of the time and the carbon knuckle piece really hindered dexterity while adding a lot of bulk, on top of being totally pointless for the vast majority of us that foolishly bought tickets on to that particular hype train.

Fast forward to the release of the original FDT-Alpha and the bad memories of the Oakleys faded quickly.  I first tried these gloves when I was in the states back in ’13, about to spend a couple of days shooting ARs on the range with a very good friend of mine.  He had a basement absolutely packed to bursting with gear, airsoft guns and actual guns, he chucked me a set of the Alphas which just happened to be my size and that was a genuine revelatory moment for me as far as cool-guy kit goes. 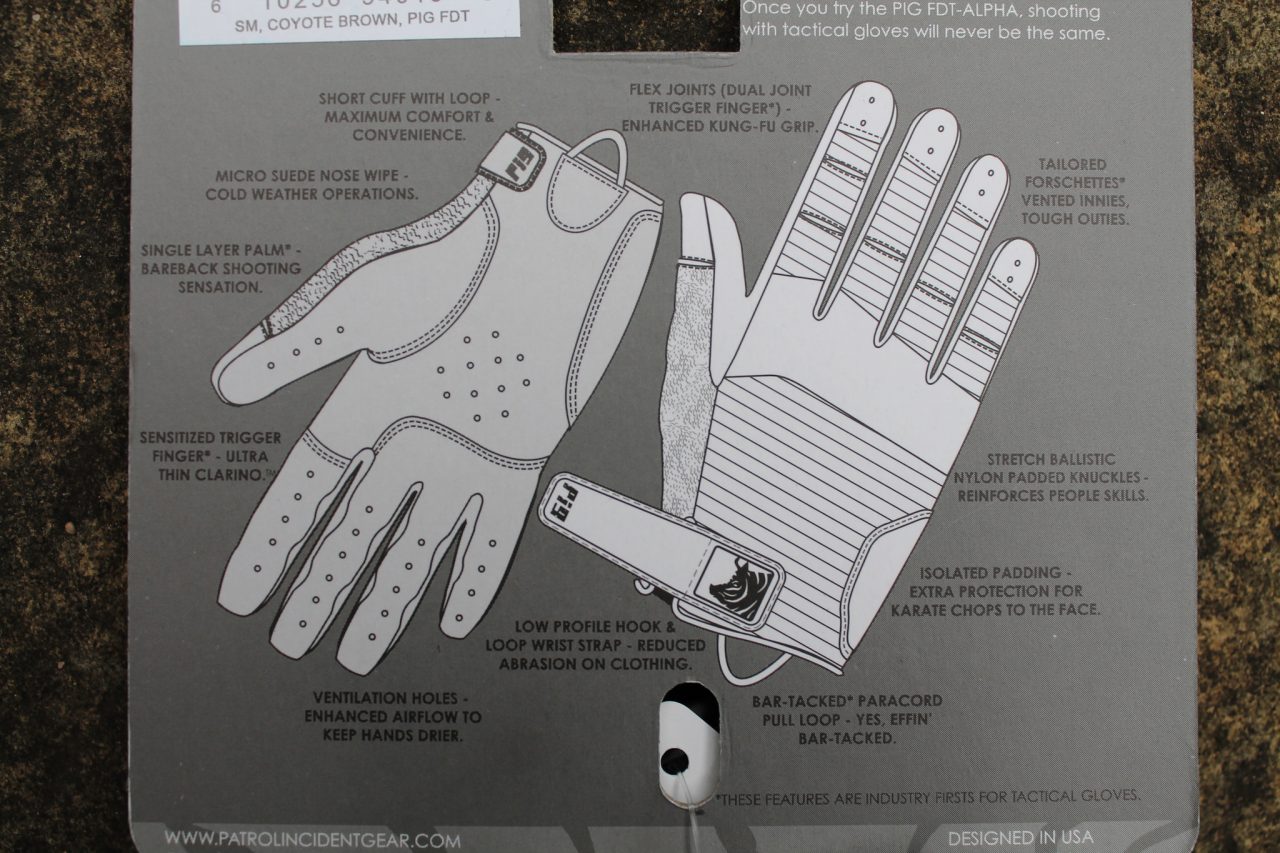 The PIG gloves take a very thin layer of some extremely nice synthetic leather over the insides of your hands, put in plenty of air holes for ventilation and wrap around the top with a couple of different types of nylon.  The materials are not the sturdiest there’s no denying, but that simply isn’t the idea and it’s a sacrifice you unfortunately do have to make to ensure maximum mobility.  The thickness (or complete lack thereof) of the ‘leather’ on the palms and under the fingers really makes you understand the prophylactic-themed slogans they go with when promoting these gloves.  Where they could have fallen down is in the ambitious number of pieces that  are used to make up each pair.  At every joining line you are briefly creating a double thickness of material and there are a lot of those lines in these gloves; but the extremely tight stitching exhibited throughout ensures that the seams simply are not noticeable, they never make themselves known to your hands as you do your work.

The articulation points on every finger function beautifully, especially the double jointing on the index fingers where it really matters.  Crucially, the ‘boxes’ at the end of each finger taper the way your actual fingers do and fit tightly.  Given that it’s your fingertips that do all the important and fiddly jobs when snapping small buckles and pressing tiny, recessed buttons, this is one key area the PIG gloves stand out, because a lot of other popular brands fall down at the very ends of the fingers.  These attributes combined with the material selection and quality of stitching all come together to produce a truly excellent end result.  A result that well explains and justifies the popularity these gloves enjoy.

Now, Mechanix will of course always garner a wider popularity, they’re usually a decent enough fit, come in an almost ridiculously large range of styles and colours and all at very low prices.  More recently there’s also surfaced a range of competitors from Magpul Core and even a slightly more budget friendly option from PIG in the FDT-Deltas.  But for this gear whore’s money, there just isn’t anything out there right now that beats the Alphas for their intended purpose, especially the newest iteration featuring the technology-friendly finger tips (ones that actually don’t suck and come apart when brought near hook like the older Alpha-Touch gloves).  I’ve never really found any need myself for the extra padding near the wrists on the outer edges of the palms.  I also wish the entry fee wasn’t quite as high for a glove that’s quite low on the durability scale.  But that’s life, you want maximum mobility from your gear and optimal suitability for hot weather, you will pay for it and it often won’t be all that durable in a purely comparative sense.  A lot of that comes down to physics.