‘Funny’ story – the first product I ever owned from Crye Precision back around 2008-2009 was a pair of AC combat trousers in Ranger Green, I was really not a fan of Multicam at the time and a large majority of my gear was in OD and DPM. It took until late 2017 however before I got around to acquiring the accompanying upper half of the set.

I’ve long felt CP are the kings of the hill in the realm of the combat cut pant. I’ve tried out all of what I would regard as the serious competitors at this point and taking all factors in to account the only ones that have come really close have been exact copies of the AC/G3 design, except even then they always mess something up. When it comes to the shirts however, I’ve mentioned before that I do find there to be a wider field of potential claimants to the throne:

I think in the end this comes down to comparative complexity between the uppers and lowers. All a combat shirt is, is something along the lines of an ACU cut shirt with the torso area replaced with a thinner, wicking fabric that doesn’t feature any pockets and the zip/buttons only run about 1/4 of the way down the garment vs a full opening at the front. A combat pant along the lines of any generation made by Crye is a dramatically different proposal in terms of fabric cutting and time taken at the sewing machine by comparison to an ACU pant or PCS trouser. 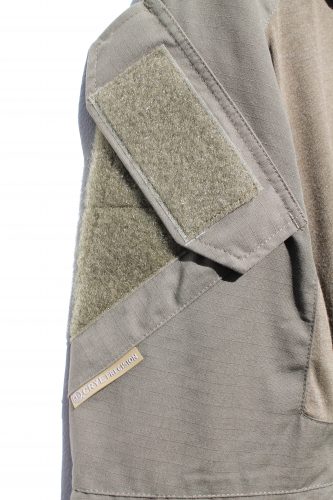 I’ve also had the question recently on the differences between different generations and that is something I’ll properly cover in a video down the line once my G4 kit arrives, but I’ll quickly clear up some confusion around nomenclature with Gen 2 since the labelling is throwing a few people off. With G3 and 4 the generation is stated on the label printed in to the garment, but that is not the case with G1 and 2, with G2 being probably the most commonly seen in use and for sale online on ebay and in groups.

The 2nd generation of the Crye uniforms primarily comprises two slightly different styles, those being Army Custom and Navy Custom, with a few other much smaller contracts being fulfilled for LE agencies and foreign militaries who requested their own styles/camos. Notable examples of this being the FBI and the special forces of the UK, Germany and Denmark. All the G2 clothing sold commercially features the AC labels inside and lots of AC clothing was of course issued to the US military, largely the Army as you would expect.

The Navy Custom clothing typically seen worn by SEALs, SWCC and other similar units within NSW (some years ago now) has a few minor differences in cut. Most NC clothing is in AOR1 and AOR2, but the only physical feature difference that is at all obvious from a glance at the exterior is the change in elbow pad pockets on the combat shirts. The AC shirts have openings for the AC combat elbow pad, whereas the NC shirts have enclosed elbow pad pockets and take the applicable field elbow pad instead, which is a system Crye brought over to all the Gen 3 uniforms (i.e. both combat shirt and field shirt make use of the same elbow pad).