The toughest kind of gear writing is to try and compare two outwardly extremely similar products, or borderline identical in this instance. So let us examine the TYR Tactical, LLC Combat Adjustable magazine pouch versus the most obvious competition in the form of the standard High Speed Gear TACO (both pictured pouches are Tyr of course).

First thing to note is there are 2 main variants from Tyr, the standard ones that I have here and cost $33 each, then the ‘Happy Mag’ types which include a plastic clip internal to the base of the pouch (presumably kydex) and cost around $50 each. I’d probably find a lot more comparative differences in the Happy Mag version, but for my purposes the extra cost just isn’t justified when the TACOs already work well and I’m not 100% certain the overall function of the pouch would actually be better in terms of what I personally want out of it when the kydex is added.

I originally picked up a couple of the CAPs since I’d seen a few folks rave about them on forums as somehow being miraculously better than the TACOs and in reality the 1st gen attachment on the TACO had, without a doubt, annoyed me significantly. I was also cognisant of the fact that, at that time, I’d not found anything all-around better than the HSG design after many years of trying alternatives so I was keen to see if anything on the market could usurp the current king of the hill.

Since the differences between the two aren’t necessarily immediately obvious even when holding both in front of you I’ll try to break them down as best I can. The first one that stands out to me is the size change, because they both share a height and depth but the CAP is slightly wider. Only by 6mm/~1/4″ but that is going to make the CAP slightly better suited to 762×51 magazines. On the other hand of course the TACO is perhaps very slightly better at dealing with 556 mags and will fare more positively when multiples of the pouch are stacked up or mounted adjacent to each other. The good thing about 545×39 and 556 mags of course is they fit very nicely and neatly in to the constraints of 2 columns of PALS, whereas other larger magazines can be mildly awkward when positioned next to each other purely on account of the design of the attachment system – certainly if we’re talking about more than 2 magazines being neighbours or a vest that is particularly crowded with equipment. Not a common situation perhaps but some folks will run their gear that way.

Attachment on the CAPs is achieved via integrated webbing strap using the tuck tail method that Crye also uses on the SPS, although the Tyr does not use Hypalon and the ends of each web strap are sewn double thickness to provide friction once doubled back and tucked. Frankly by comparison to current production TACOs I’ve got no real preference either way as once mounted it makes no odds and both pouches will sit securely at the same height. 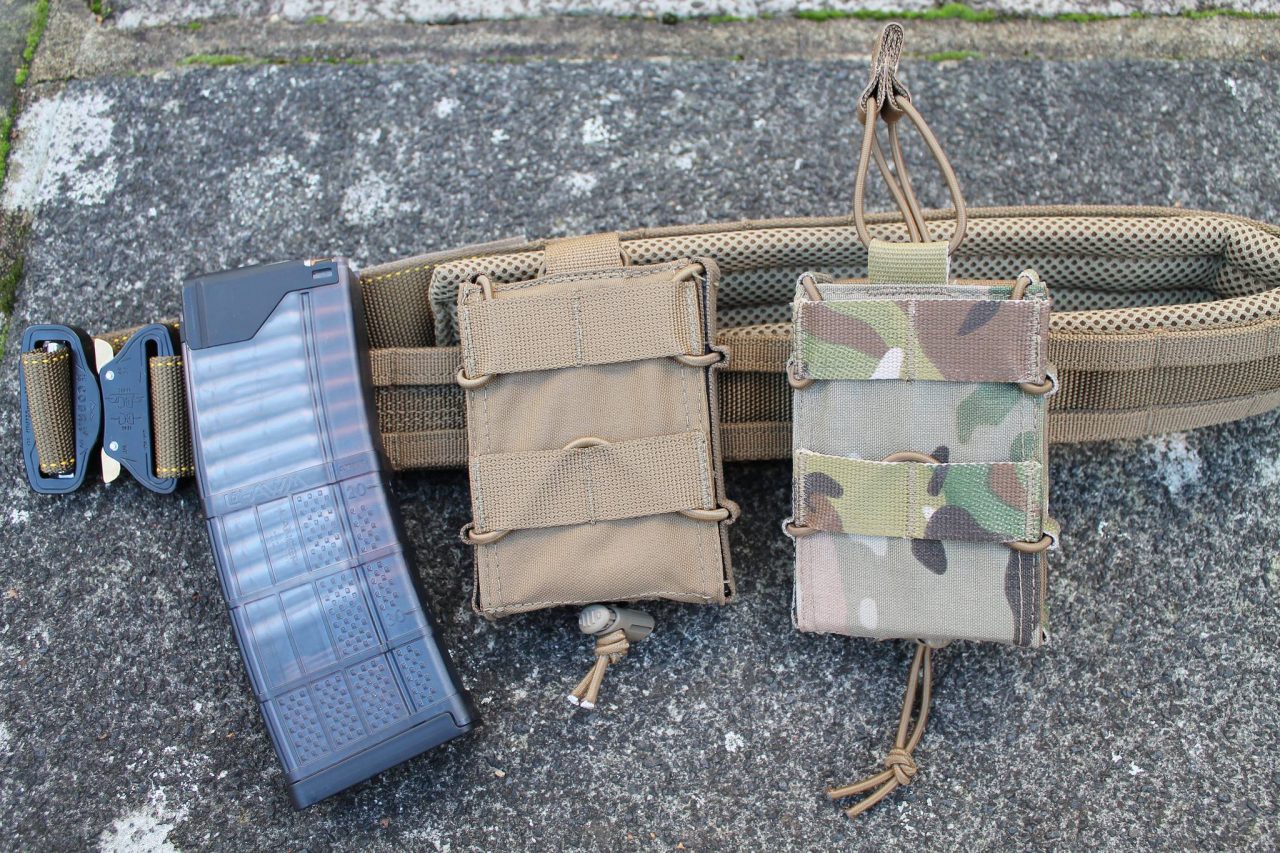 Routing of the bungee cord may look different from the TACO but adjustment is accomplished via the same manner and in the same location via a cord lock and the tail can be stowed up amongst the PALS if so desired. A difference is that the sides of the CAP are cordura laminated on to free floating strips of plastic, whereas the TACO of course incorporates a U-shaped injection moulded piece that is riveted in to the base of the pouch.

On the inside the CAP has small sections of non-slip material to aid somewhat in adding friction for retention whereas the TACOs have small areas of loop velcro in the same areas so the end user may add adhesive hook to their magazines. The CAPs also come standard with bungee over-mag retention and while the HSG design incorporates a webbing tap on the front to add the bungee there is none included by default.

The stitch work from Tyr is easily recognisable as the superior of the two products in question. The per inch count is far higher, doubly so in fact at 10 stitches per inch vs 5 on most areas of the HSG pouch. The bar tacks are also far neater and more compact. That said I’ve never had issue with a TACO falling apart on me by any stretch, but the numbers are the numbers.

Drawing of a magazine is smooth and easy on both competing pouches though I think reinsertion is perhaps slightly easier on the TACO. There is often a certain amount of wrangling to be done with both designs, but the CAP tends to close in towards the body whereas the TACO will tend to close up in the perpendicular fashion with the tips of either side of the U-shape insert coming closer together at the top/opening of the pouch. I tend to find that the natural motion of inserting a mag will make life slightly easier with the HSG design in terms of re-opening the top.

Overall, if there are any nuances about the CAP you prefer then by all means go for it, especially since it retails for a dollar less than the TACO (OEM’s websites) and is better sewn. There’s certainly not enough difference to go to the bother of selling all your TACOs and upping sticks, but if you’re in the market for an adjustable or multi-mag compatible pouch I certainly would keep the Tyr offering in mind. Also stay tuned because thoughts on the FirstSpear Multi-Mag will be forthcoming at some point in future and that thing is an entirely different kettle of fish.