A few years ago when Magpul were all the rage and those DVDs were all everyone was talking about, there was a very strong trend within airsoft towards buying the likes of CTR stocks and MIAD grips for replica guns.  Either the real thing, or the PTS replicas for most folks outside of the US.

During that time period, the ‘pinnacle’ that got you the most likes on discussion forums (Instagram was not a thing yet) was to have a black KAC rifle replica outfitted with a real Magpul Industries CTR, a PTS MIAD and other Magpul bits on the Picatinny rail – All in FDE.  It got a bit repetitive so I decided to try and find an FDE coloured KAC AR replica, then put some black Magpul parts on it.  At the time (late noughties) VFC were turning out these copies of Knights rifles with fully realistic trademarks at a serious rate and they were a common sight because they had ambi selectors before basically any other AR replica in airsoft.  Looking back now I’m pretty certain they were being naughty with said trademarks, but I was entirely ignorant of those sorts of issues at the time.

Luckily I found this SBR style sewing machine for sale 2nd hand but unused at an appealing price over on the ArniesAirsoft forums.  I already had the stock and pistol grip in FDE so I slapped those on, added a terrible knock-off T-1 clone, some Magpul ladder covers and an XTM hand stop, as well as a SureFire X600 and SR-07 tail switch; finished with an old PTS Gen2 style AEG PMAG. 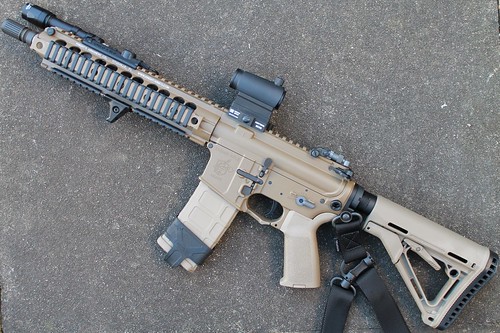 This looked realistic to an offering from Knights Armament, but it wasn’t what I wanted to build, the rail was too fat and heavier than more modern options and there were a few other niggles.  So change work began.  Compared to the Krytacs and the like you can buy today, the internals are supremely basic and while the RIF functioned fine when I first got it, the gearbox developed a habit of getting its’ piston stuck to the rear for no reason, so the whole thing went off to LC’s Engineering Outpost.

My buddy Jim over there did a bang up job of making the internals cycle as they should as well as re-tightening the QD sockets integral to the lower receiver, which had somehow worked themselves half way out.  I also asked him to remove the quad 1913 rail, which proved to be a pretty epic task for an airsoft gun.  The KAC URX 2 design comprises 2 levels of threading inside the rear portion of the rail; the lower quadrant is removable via the screws at the sides, but the main body comprising the other 3 rails is actually screwed on to the upper receiver as one whole unit, no separate barrel nut like other companies which you mount to the gun and then affix the main portion of the handguard to.  To make things trickier, there’s then another separate nut which slides over the barrel and nestles inside the base of the rail.  This had been (I found out when collecting the gun) doused in what was near enough super glue and torqued to insanity levels.  A custom tool was made, which broke, so it was remade much tougher, then that one broke, but the 3rd iteration of the peg spanner that was all steel using threaded spigots did eventually remove the inner nut.  I then myself mounted the upper receiver in a vice at home and used a combination of a strap spanner, plenty of heat and a lot of shouting to break the tension/glue and unscrew the main body of the forend. 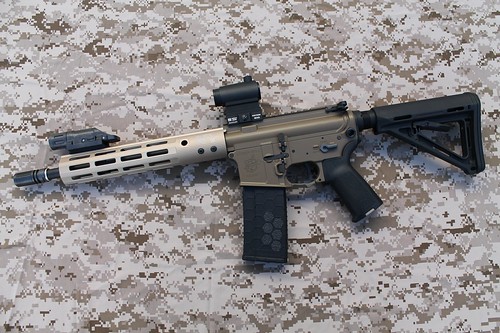 I had the black MOE stock and pistol grip already here so they went on and the cheap T-1 is just an ornament for pictures; I stopped mounting any BUIS for airsoft usage long ago because it’s extra expense (and a little more weight) for something I’ve never used and wouldn’t ever actually need.  Also, given that the supplied dual-QD sling plate at the rear of the lower was made entirely redundant by the two integral sockets, I moved over to a standard AEG plate that only features 1 QD point directly facing the firer.  Overall a massively better design since it allows a sling with QD swivels to function like a Magpul ASAP when transitioning shoulders.  Switching to shoot around the different sides of any given cover/barricade is quick, easy and snag free. 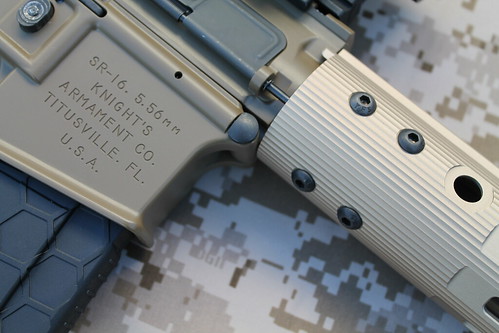 Having purchased some fairly pricey AR-15 forends from the US in the past I really wanted to see how something cheaper might compare, so I went for the ALG Defense EMR V1 to replace the VFC URX copy.  In retrospect I should’ve gone with the EMR V2 (in Black) because the V2 incorporates a small section of pic rail right where you’d usually mount your front BUIS.  On this gun the Magpul plastic M-LOK section I attached sits right over the fake gas block and the screws on the rail segment end up contacting the block if properly tightened; this is the ‘I didn’t see it coming’ issue that happens literally every time I change up a gun because I’m always using new things from different brands to try and gain as wide a field of knowledge as I possibly can to facilitate sharing out said knowledge.  However this was my very first M-LOK forend and the great thing about ELG is all their rails use the same barrel nut, so when I get around to changing to a V2 it’ll only be a case of undoing the visible allen bolts.  The other huge bonus is their pricing; being a sister company to Geissele Automatics the quality is superb and their rails do not feel cheap vs the Geissele SMRs.  I can only presume ALG works on something close to a no-profit business model and they’re just turning over money for their most part, because their entire EMR line is priced more cheaply than the likes of Madbull’s airsoft-only rail systems and a lot of the offerings from PTS, yet all the ALG tubes are made from extruded 6061-T6 aluminium with a 2″ 7075-T6 barrel nut that fits inside the tube immaculately creating a zero wobble lock-up that genuinely feels solid as a rock on your upper receiver.  The anodising is very shiny, at least on ALG’s ‘DDC’ option, but it’s also as smooth as silk.

The Magpul polymer rail section weighs almost nothing and in spite of the interference issue I’ve got it mounted quite satisfactorily.  The Inforce WML does sit rather higher than anyone would like and I’d imagine Magpul could make their M-LOK compatible 1913 segments slimmer if they wanted to, but I’d also imagine they were tested on hundreds of different accessories and mounts and the extra clearance was a deliberate piece of design work to ensure fitment across the board.

While I’d not recommend the Inforce over a Surefire light for duty or defensive usage due to the more fragile plastic body, the WML is comparatively quite cheap and extremely easy to mount and use, a good option for sporting applications and still somewhat rugged.  There’s no option for remote switches so you simply clamp on the integral mount (which is much lower profile than the standard Scout mount) and you’re away, no routing wires or buying extra accessories to mount a pressure pad or manage the cable.  When mounted as pictured you’ve got incredibly easy access to the angled pressure switch using your thumb regardless of which shoulder you might be shooting from at any given moment. 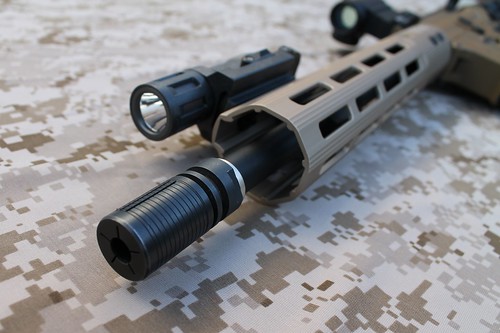 Once I’ve changed the forend over to ALG’s V2 the M-LOK vs Gas block interference issue up front will be removed and the aesthetics will be pretty much there, I’ll just have to paint or swap out that nasty chrome washer behind the KAC Triple Tap Brake replica.  Not a gun I’ll pull out often because the internals are so basic and the trigger response on semi auto is a real dinosaur, but with the 11.5″ barrel and a rail that only weighs around 10 ounces including the mounting hardware it’s still a handy package that works with common magazines and generally does what I’d need it to do for ‘CQB’ or Indoor type games. 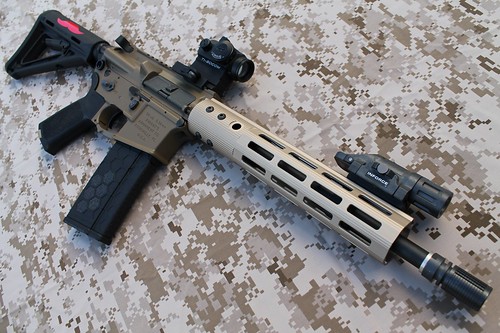 Oh and the sticker is from 4 Guys Guns.  Their handy moustache decal packs come in multiple colours with 4 different styling options in each that allow the operator to quickly transition from their shooting stance to a comedic pose whenever the need should arise by simply turning the gun 90 degrees to the side and lifting their collapsible stock to their upper lip.