Weird Guns Created by US Laws

I didn’t come across anything new at the FN booth, but I do think folks outside the US would benefit from a little bit of info about some specific American firearms laws so I’ll use some FN product for demonstration purposes. Certain guns that you’ll see online make a lot more sense in terms of their existence when you know something about the laws that have essentially forced the hand of US manufacturers. A lot of this stuff leaves people very confused down in the comments sections on occasion. I am not a lawyer and the below is not even the tip of the iceberg on this issue, but I’ll try to cover a couple of points that explain some commonly seen ‘compliant’ (i.e. complying with a law) guns online.

First off you’ve got federal level laws (i.e. across all states) of which perhaps the most pertinent is the National Firearms Act or NFA of 1934. Once the NFA became US national law it required a $200 tax be paid and registration paperwork be filled out and submitted to the government by anyone wishing to be sold or to manufacture various firearms and accessories. Included under the NFA were automatic weapons (referred to often as ‘machine guns’ even if they’re not), short barrelled rifles, short barrelled shotguns and suppressors/silencers, amongst others. The parts related to automatic weapons and suppressors are hopefully self explanatory. Automatic weapons were subsequently banned entirely from being manufactured and sold to civilians by another act brought in in the 1980s. The SBR rules cover rifles with stocks that have barrels less than 16″ or an overall length less than 26″. The SBS rules cover shotguns with barrels less than 18″ or overall length less than 26″, however the shotgun rules have more to it than that and are even more complex than those related to rifles, so I’ll just stick to rifles in this post. 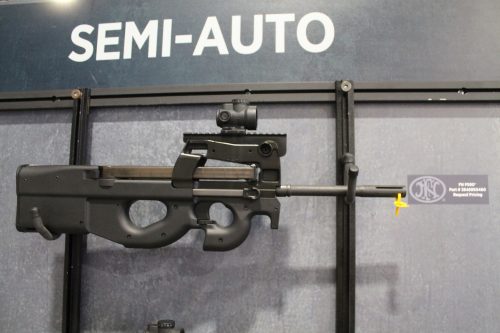 Since the butt end of a bullpup counts as a stock, this semi-auto PS90 civilian version of a P90 would require the $200 tax be paid and lots of forms be filled out (along with a long waiting period) if it did not have the barrel extension taking the barrel to 16″+ with a 26″+ overall length. The CMMG AR pistol that I posted a little while back however that also fires the 5.7mm round had an ‘arm brace’ on the rear of it and one of those does not count as a stock even though it looks like one, therefore that weapon is legally a pistol and in the US you can go basically as short as you like on the barrel/OAL of a pistol without paying the tax or filling out the forms and waiting. Therefore, if you happened to want to shoot 5.7mm from a really short and compact weapon that functions similarly to a rifle without paying $200, filling out loads of forms and waiting for ages, the CMMG AR-15 variant with the pistol brace on the rear would be the gun to go with. 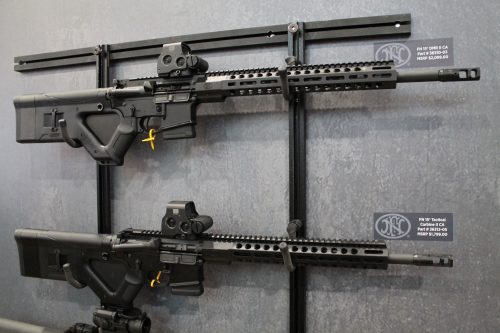 When it comes to the state level laws they will vary greatly from state to state and things get even more complicated than the federal laws with huge amounts of variation. California for example has amongst the tightest laws relating to firearms in the US. Various states to include California have enacted laws that prohibit various types of firearm beyond the federal restrictions and often they go about that by describing certain ‘features’ within those laws to elaborate on what exactly they’re banning. Commonly banned features include, but are not limited to, detachable magazines (sometimes capacity specific), bayonet lugs, muzzle devices/threaded muzzles, collapsible stocks, barrel shrouds and pistol grips. Sometimes you will be allowed 1 or 2 of these features to be present before the firearm becomes restricted and usually the feature people will want to retain the most is unsurprisingly the detachable magazine. Not having a bayonet lug or muzzle device is easily done as you can imagine, but to not have a pistol grip on a rifle like an AR requires a bit more thinking outside of the box, hence products like these stocks that join the butt and pistol grip of the gun in one solid piece of plastic and therefore do not count as pistol grips under the law.

As I say I’m not a lawyer at all let alone a US firearms lawyer and there are endless reams of documents and law covering this subject with almost inconceivable levels of nuance to them. The barrel length issue on rifles and the thumbhole stocks however are probably the 2 most common laws that cause some US commercial market guns to end up with strikingly unusual aesthetics, so I hope that this post clears up some of that stuff for a few of you.