There is already an excellent piece on militarymorons.com which covers Crye Precision’s first commercial offering of a combat shirt, however since that was written just before the initial release of the Gen 1 combat uniform to the public I still wanted to take the opportunity to put together this post and look at the product with a slight modern slant and throw in a couple of comparisons.  If you are curious however you can read the original review here:

We take the concept of a combat shirt for granted now, but around the turn of the millennium the only ones in existence were perhaps a few personal field-chop mods done by/for a small number of SF guys on deployments and maybe some early production and prototypes from Crye.  That is the gist of the origin of the idea at least, but as with anything, trying to find ‘the first’ and say for certain that any given example is the de facto original example, is going to be a bold claim.  One image I enjoy is this one posted on Soldier Systems that depicts some incredibly early prototypes from Crye Associates.  Presumably they were manufactured before Scorpion fabric (the progenitor of Multicam) had even rolled off the production line.  As you can see, the t-shirt type torso with NYCO camo sleeves is evident; interesting early examples of the combat trousers too showing that the design of the knee pad really hasn’t changed in a long time. 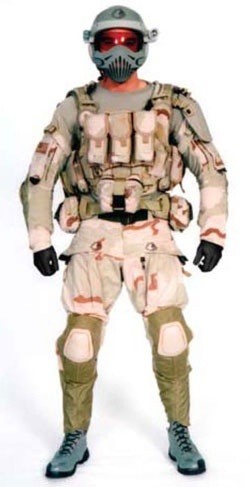 Unfortunately I’m not aware of any information that’s publicly available which really explains in any detail the progression of prototypes leading up to the Generation 1 commercial release (i.e. between the items shown above and G1), so I’ll have to skip over that topic until such a time I can perhaps get a hold of the appropriate dates and details.

The first thing to note about the G1 uniforms is that the multicam fabric is not the 50/50 Nylon/Cotton ripstop fabric that has now become so ubiquitous.  It is 50/50 NYCO, however it’s twill rather than ripstop and the lack of telltale grid pattern within the weave becomes apparent as soon as you know to look.  Generally speaking though, in spite of its’ age, there’s nothing much outlandish about the design of the G1 shirt or indeed anything to suggest that designs following it took drastic departures from the template.  On a basic level, there are plenty of combat shirts being manufactured and sold to this day which still use the same layout and ideas.

After materials, the most stand-out design choice on a combat shirt is perhaps the upper arm pockets.  On the Gen 1 we have internally mounted pockets with vertical zips are that are recessed and covered.  The zip pulls lack any extra nylon cord or other type of plastic add-on to aid in opening/closing and the superior modern choice would be to simply replace the stubby metal pull tabs with longer, quieter and lighter synthetic cord that is easier to grab.  However for an arid climate garment the lack of extra pull tabs on the pockets is certainly understandable and the same applies for the torso zip.  As far as loop fields go they are comparable in size to the surface area on the Gen 2 shirts but oriented horizontally over the top of the pocket space. 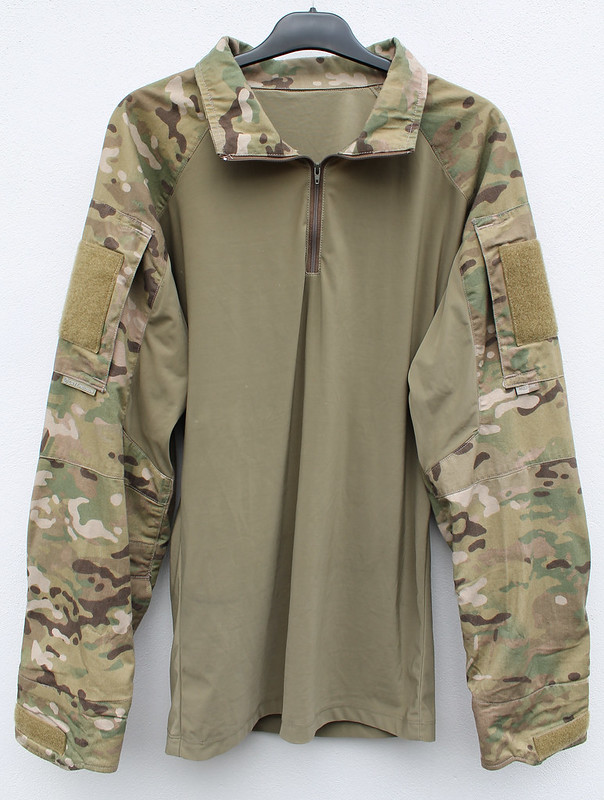 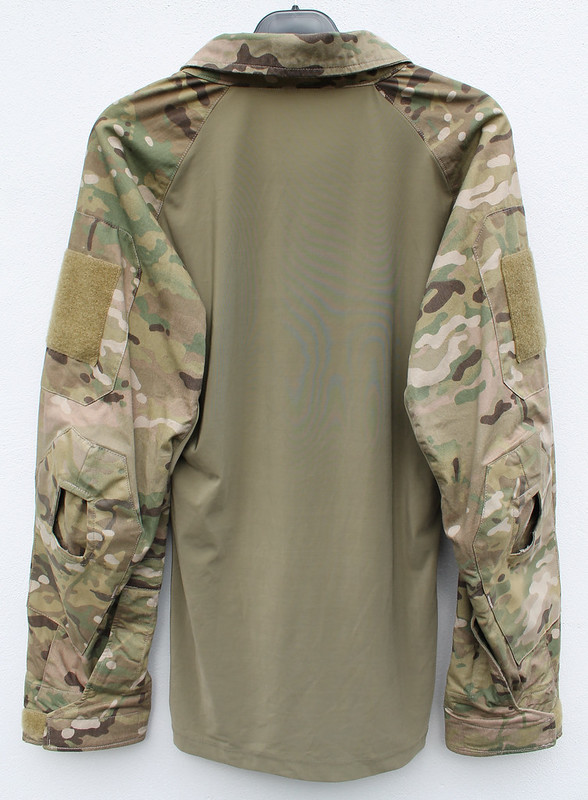 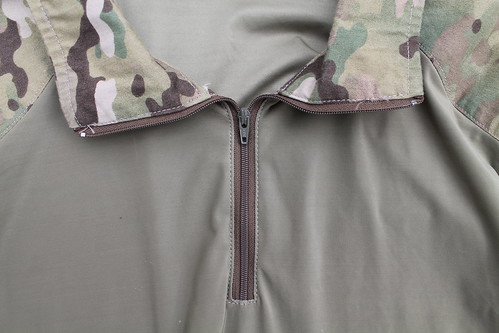 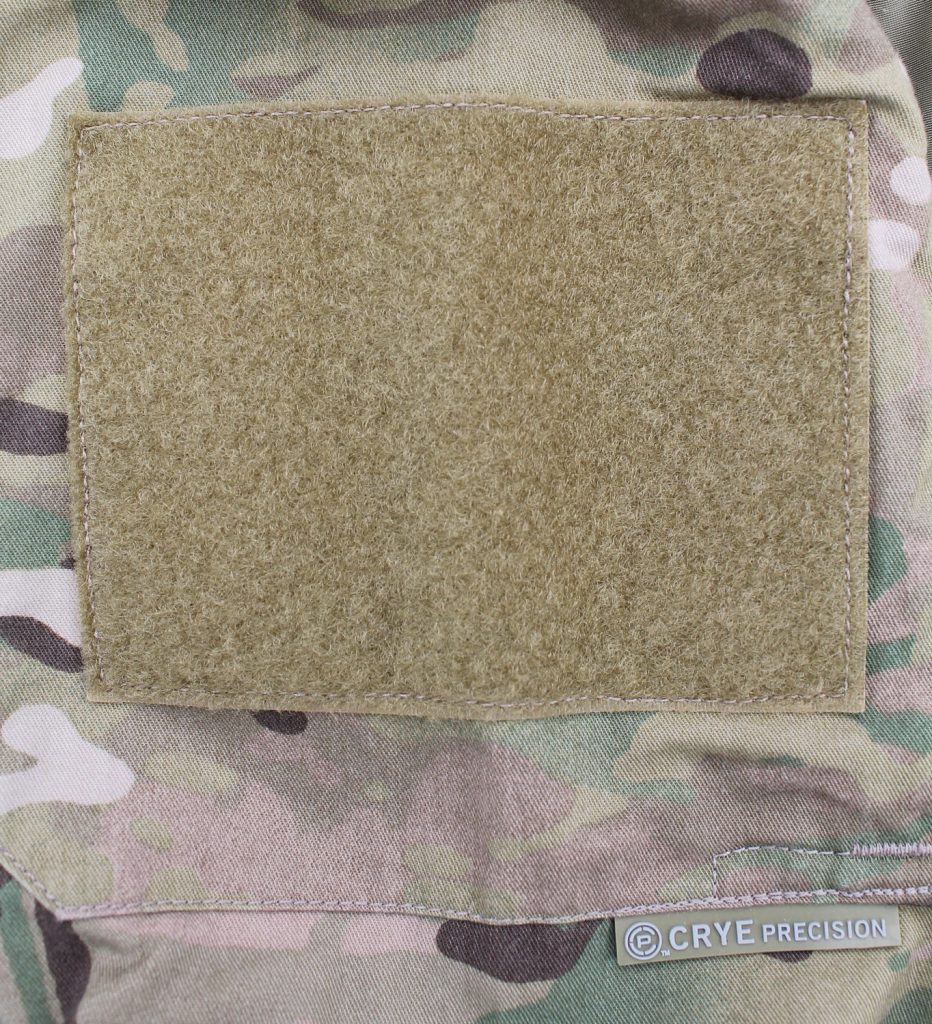 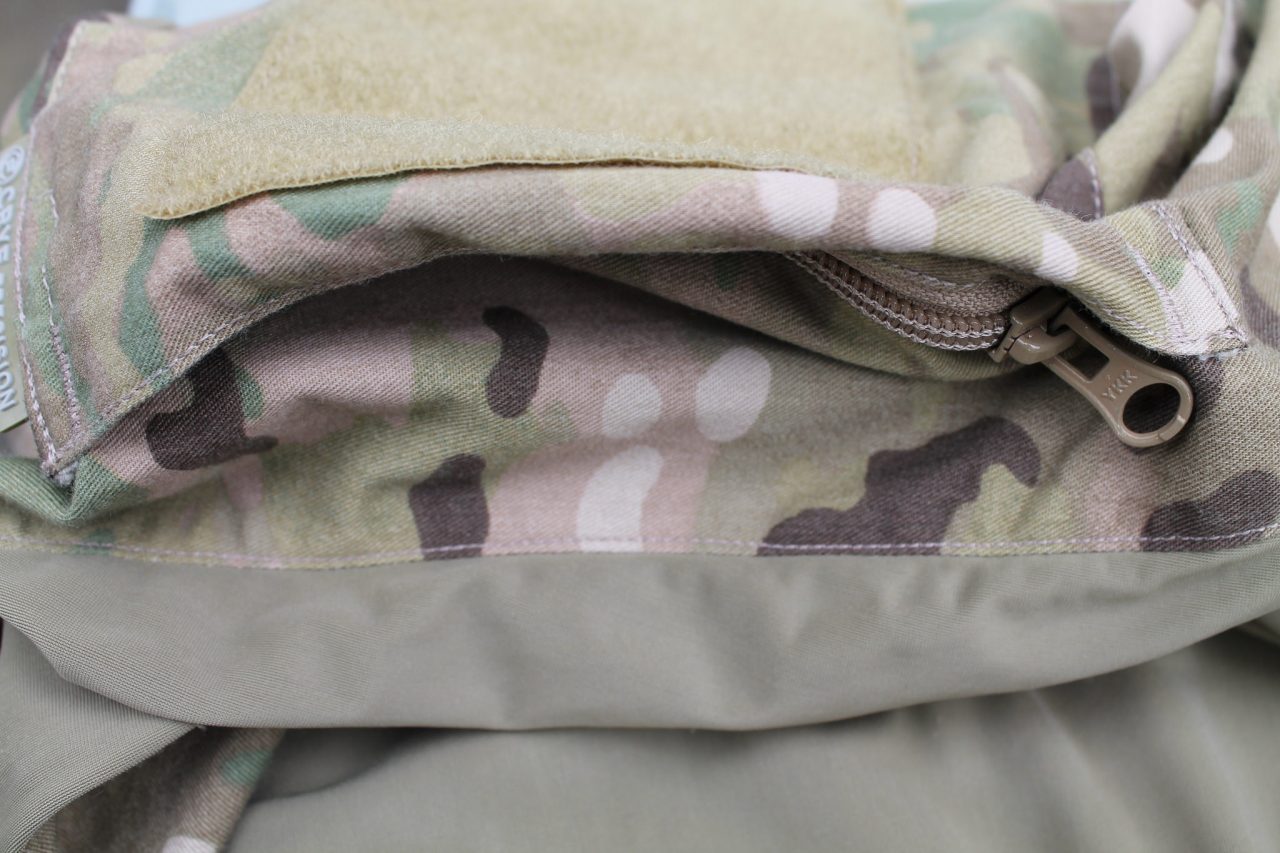 Funnily enough, although Crye have often talked about reducing weight in recent years, when putting the G1 shirt on the scale it came out, to the gram, at the exact same weight as a G3 multicam combat shirt – both of mine here weighing 454g.  On the one hand the G3 has saved some weight (and lost a small amount of resilience) by not having the cordura reinforced elbow pockets, but on the other hand the ripstop NYCO will hold up better against the environment in general compared to the old twill.  While the Gen 3 torso may not be FR it is at least no-melt/no-drip, which is certainly the preferable option in a military garment even if it doesn’t dry nearly as quickly.  Overall, a gain in resilience and FR properties for the same weight is a move in the right direction, given the context and intended end user.

As we can see when getting close up on the labels, the system for the nomenclature here is much akin to military issued garments i.e. the words in the name are put in reverse order with commas.  The sleeves (plus collar and yoke) are the 50/50 NYCO twill as mentioned, the sleeve reinforcements are cordura (more on that in a moment) which is 100% nylon of course then we have the torso fabric, which in this instance is primarily polyester with some elastane for even more stretch.  If you want a fast drying material in the area where you’ll be sweating the most then something polyester is a very efficient way to achieve that, the flip-side being it won’t serve you well in the event of being anywhere near fire.  This is something that changed significantly between the 1st and 2nd generation of combat shirt from Crye Precision. 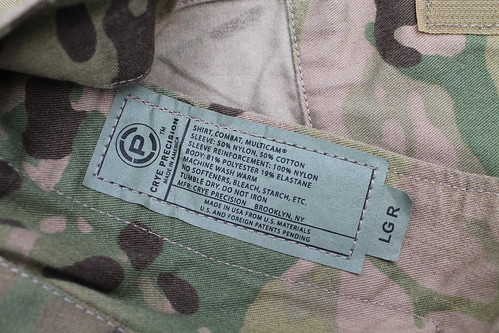 Next is a close up on the cuff fully opened and folded out with the size and description labels visible.  Although this open cuff is a design feature that Arc’teryx LEAF has persisted with in their combat shirts for many years it was of course abandoned by Crye as soon as they moved to Gen 2.  Some people find this setup superior as far as rolling sleeves is concerned, though I tend to find a standard sleeve permits rolling exactly as high, or low, as the wearer desires.  Whether that be the ever popular hero roll, just below the elbow, or all the way up past the elbow in military barrack dress style.  All can be easily set with a conventional non-split sleeve. 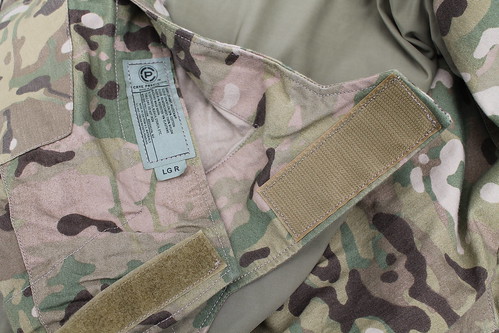 Had to throw in this close-up on some of the stitching on one of the cuffs, purely because it’s so beautifully bad.  After a fairly close look over the rest of this shirt I wasn’t able to find any other examples of poor work on the sewing machine, but this one really jumps out at you with even a cursory glance.  The stitch line is of course simply holding in the rectangular piece of hook that facilitates securing and adjusting the cuff, all the edges of that hook are held securely and nothing is in danger of falling apart.  I’ve also never seen any stitching this far off the straight and true in any of my other Crye items from Gen 2/3 and the collection comprises a good number of pieces at this point, all of which I’ve checked over at least briefly at the minimum.  It’s one of those issues that really does not affect the garment in any way be it functionally or structurally and when you’re a service person who gets issued this gear and subsequently wears it out in short order before getting a free replacement, aesthetic considerations in stitching matter even less.  That said, from a commercial buyers’ perspective it’s not unreasonable to ask for straighter sewing than seen here when you’re paying high prices for some of the best apparel the tactical market has to offer. 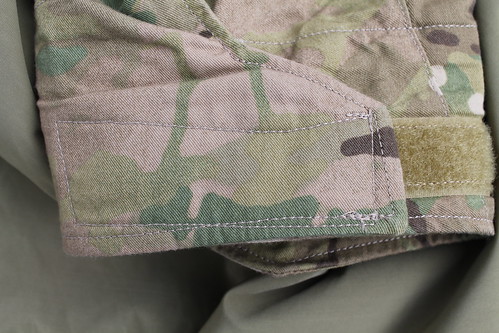 A stand out characteristic of the Gen 1 uniforms overall (which I wish a larger number of other brands had copied/would copy) is cordura reinforcement in areas likely to be subject to an increased amount of environmental abrasion.  In the case of the combat shirt, the pocket which holds the separate elbow pad is made entirely from cordura, which I’d assume to be 1000D.  The fact that 500D most likely didn’t even exist at the time would tend to support that assumption.  The pass-through inside the pocket facilitates mounting of the pads in the exact same way as seen on the Gen 2/Army Custom combat shirt and the pads themselves are cross compatible between G1 and G2. 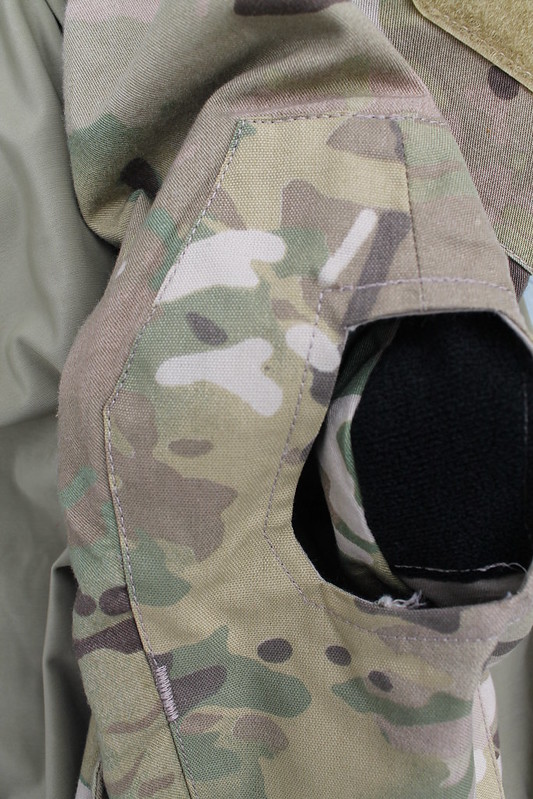 A quick comparison shot of Multicam NYCO; early-00s production twill on the left with brand new 2015+ production ripstop on the right.  Obviously there is some fading apparent in the old twill as a result of aging alongside the fact the shirt did see a very small amount of use before it came to me and has likely seen at least a couple of wash cycles.  What is evident of course is the comparatively far more vibrant palette of the new fabric with a stronger contrast between each colour.  In particular the darkest brown is darker on the new fabric and on this specific swatch the medium brown/coyote is visible in greater quantity. 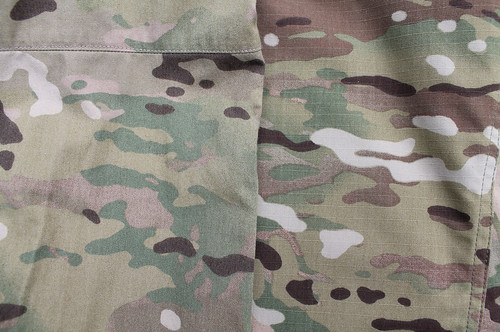 Overall I feel the G1 shirt is, funnily enough, actually the best option at least as far as the hobbyist user is concerned when contrasted against G2 or G3.  Which means if it weren’t something of a rare collectible relatively speaking, it would be the best Crye shirt ever produced for sporting and recreational purposes.  The polyester torso fabric is by far the quicker at drying when contrasted against the cotton jersey blend of G2 and 3 and the FR performance is irrelevant in a hobby scenario.  The loop fields on G1 are much better at securing patches than the two strips on G3 and the G1 pocket access is overall the quicker and easier option compared to the top loading velcro flaps, which is presumably why the G1 setup is what is essentially being brought back for Generation 4.

It will be interesting to try out the G4 combat shirt once that hits the market as Crye will finally be returning to the internally mounted sleeve pocket with vertical zip closure after all these great many years.  The new torso fabric is also supposed to be extremely permeable to airflow and quick drying, so the correlations between G4 and G1 are not just simple and superficial ones.  The fabric technology and the manufacturing techniques have come along a fair way, certainly in terms of the new VTX vs NYCO Twill and a no-melt torso that still breathes by comparison to the old will-melt polyester, but the goals of the garment in terms of what it provides to the wearer really haven’t changed a great deal in a lot of respects.