All well and good having a decent PC, but if the other stuff is really cheap, worn out or unsuitable you just don’t enjoy it nearly as much. 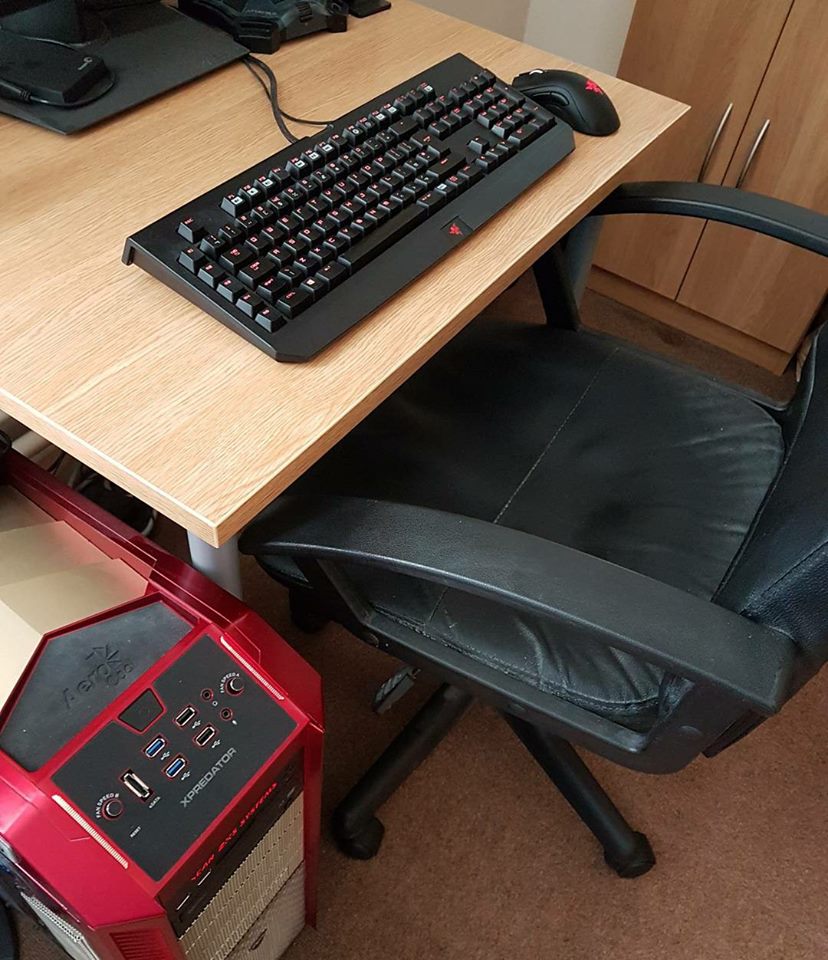 Went through a certain company to do a tax reclaim type deal recently, decided that with the amount of time I spend sat here at the REMF Tac command + control management station I needed to make some changes.

Gone from some horrible £50 Argos chair that I’d spent most nights the past 8+ years sat in to a nice Nitro Concepts ‘Pure’ with thick new padding that’s not so worn down that my arse imprint is touching the plastic base and hurting the bottom of my spind. Also has lumbar support that my previous one didn’t, which my old-man back is finding so comfortable it can’t even handle it yet.

The previous Razer control accessories were, I have to say, a let down. Partly due to me not doing enough research, partly in build quality. The keyboard had clicky switches with a heavy press weight that was HORRIBLE for tapping out long reviews and blog posts; and while that’s my own fault for not educating myself more on switch types before buying, the fact keys would often get stuck on like thiiiiiiiiiiiiiis, was very much a manufacturing defect. I’ve gone over to the ROCCAT Isku+ Force FX, which is actually a membrane board so some of you out there will be going madat me right now, but my board before the Razer was something like a £15 Cherry brand super basic thing that was more akin to a laptop keyboard with very slim keys and I’m a big fan of that style frankly. Also this Roccat has something I’ve longed for my entire gaming life and it’s the only board to have it – analogue keys (progressive input like a console controller button). I don’t play many racing games but I like to wander from FPS/RTS occasionally and I have played a lot of console conversions in my life that are designed for the player to use analogue input. After playing many, many iterations of Metal Gear Solid on PC I’m pretty stoked about this feature. It’s a comparatively low price board but typing this right now is just so much quicker and easier than on the old clicky switches.

The Razer mouse always worked fine, but it was ambi shaped which I’ve never really like and lacked on-the-fly DPI (sensitivity) change, which was again a stupid mistake on my part after going from my previous Logitech G9 which had that functionality. As a heavy Battlefield player since the series began (I pre-ordered a physical copy of 1942 in GAME) being able to maximise sensitivity for tight turns in aircraft then eventually die and dial it down for precision rifle shots at long ranges when back on the ground has proven crucial time and again. I’ve had occasions back in the day when resolutions were lower that I was taking shots at such distances I couldn’t physically get the front iron sight blade on to the target as it skipped over the right pixel placement (G36C unlock in BF2 for those who remember) and you need low sensitivity to remedy that sort of thing. I’ve plumped for the Roccat Kone EMP now and again it’s one of lower-middle offerings from the brand but I really never use weight adjustment and I’m not nearly good enough for having 25 buttons on a mouse or 25k DPI sensors underneath. This gives me quite literally everything I want at a good price and build quality.