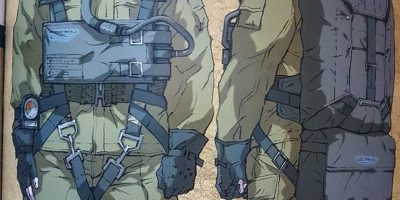 If you’re looking for “Big stuff coming in 2018!” this is not where you’ll any of that. Hell the way the weather is going right now I’d not be surprised if it snows a shit ton the day I’m meant to fly to Vegas and my whole carefully planned SHOT trip is royally buggered.

If you follow me on IG in order to see the ‘stories’ you’ll see I’ve spent genuinely the entirety of 2 days before today building Ikea flat packs (which I now despise with a passion) just so I can have more room to store kit. About as far from glamorous as it gets. But necessary if I want to carry on building the collection. Spent all this afternoon laying out the next mail call post picture; got bloody lucky as just as I brought the camera inside (after all the kit) it hammered down hail as I stepped through the door

Minor break from the gear to discuss what I’m playing at the moment – I am only on PC but then these days the majority of titles get released out on most or all platforms.

Recently finished a campaign in Medieval 2 Totalwar which I’d had going on and off for maybe a year at a guess. For those unfamiliar, TW is like Risk/Civilisation, but when the pieces meet on the board you zoom in to a real time battle with access to just the units in that army. Medieval 2 was the 4th entry in the series, the first 3 using a really old school graphics engine with a lot of 2D (yep) troops in the tactical battles. In Med 2 you’ve got all of Europe, most of Russia, North Africa and modern day Syria plus parts of Iraq and a few other countries in that region to primarily fight over. An awful lot like both World Wars in many ways, even the nations involved are essentially the same ones with a lot of clashes through France. It’s also heavily based on Religion and the crusades on a strategic level, with Catholic Europe squaring off against Orthodox Russia and the Islamic middle east, as if there weren’t enough modern parallels already. Funnily enough I played Empire TW about 8 years ago and that starts off right where Med 2 finishes, with every nation fielding rudimentary firearms while melee warfare and bows fade away.

The screen cap is my faction leader (King of England) with his army of shinily armoured’ knights and their polished helmets swatting down the final bastion of rebel hold out that was left over after I finally had beaten the Mongol hordes.

In between gradually conquering the world map in TW, I’ve been dipping in to Battlefield 1, primarily when a new DLC comes out of course. It’s the most mainstream series I play these days, but I started my time in BF by pre-ordering the 2 CD-ROM box of 1942 in a GAME store. Missed Vietnam, played BF2 massively, quite a lot of BF3 and BC2, bought the fancy edition of BF4 with the season pass and blimey was I disappointed. Nothing but pink tanks rolling around everywhere with marijuana leaves on the sides to cater to shit bag kids who scream at their weak willed parents until said parents cave and buy them the collector’s edition of this year’s CoD. I know the WW1 setting is somewhat divisive, but as someone who finds a lot of modern weapons really boring at this point (they’re just too easy to use and efficient), playing this Battlefield during the centenary of the war and learning about a lot of the guns in Forgotten Weapons videos as I go has been very enjoyable indeed.

Right now I’m hugely surprised by how hooked I am on Child of Light. It’s one of those games Ubisoft does so, so much better than the turd Assassin’s Creed has become. The trailers for it make it seem like some sort of relaxation software, or a game only aimed at young girls. Reality is it’s more like a moving piece of art with truly amazing music, great painted-style visuals and all the dialog is written poetry; good poetry too. There’s Rayman-light type movement around the world with Final Fantasy/Stick of Truth RPG combat all reliant on timing and it is far harder to get right than you’d think based on the aesthetics of the game. In a similar vein and also looping back to WW1, be sure to check out Valiant Hearts: The Great War which is another Ubisoft 2D platfomer with lots of puzzles, no actual combat per se, just a truly amazing story of some real heroes who went through literal hell between 1914 and 18. It may be presented in a fashion that can look like Wacky Races-inspired childish cartoons, but the stories going on with the characters are incredibly deep and involving and draw you in like nothing else. I choked right up at the end of it and if you play it you’ll see why, superb tellings of heart wrenching tales of horrors 99% can’t even imagine.

Last recommendation based on a recent play through is Transistor, which is another RPG though isometic this time, with somewhat timing/turn based combat. It drops you right in at the deep end in to a very unique sci-fi sort of world (which is impressive enough as it is) and you have to learn what the hell’s going on as you play. No handy intro cinematic, the veils are slowly lifted as you progress. Tragic ending of course, as with a large proportion of the best games. However yet again great characters, as is they key to giving a damn about the story in any game, film, book or TV show.