If perhaps you’ve landed on this page via an external link rather than the front end of the blog here, you can find the post on the shirt to accompany these trousers right here. 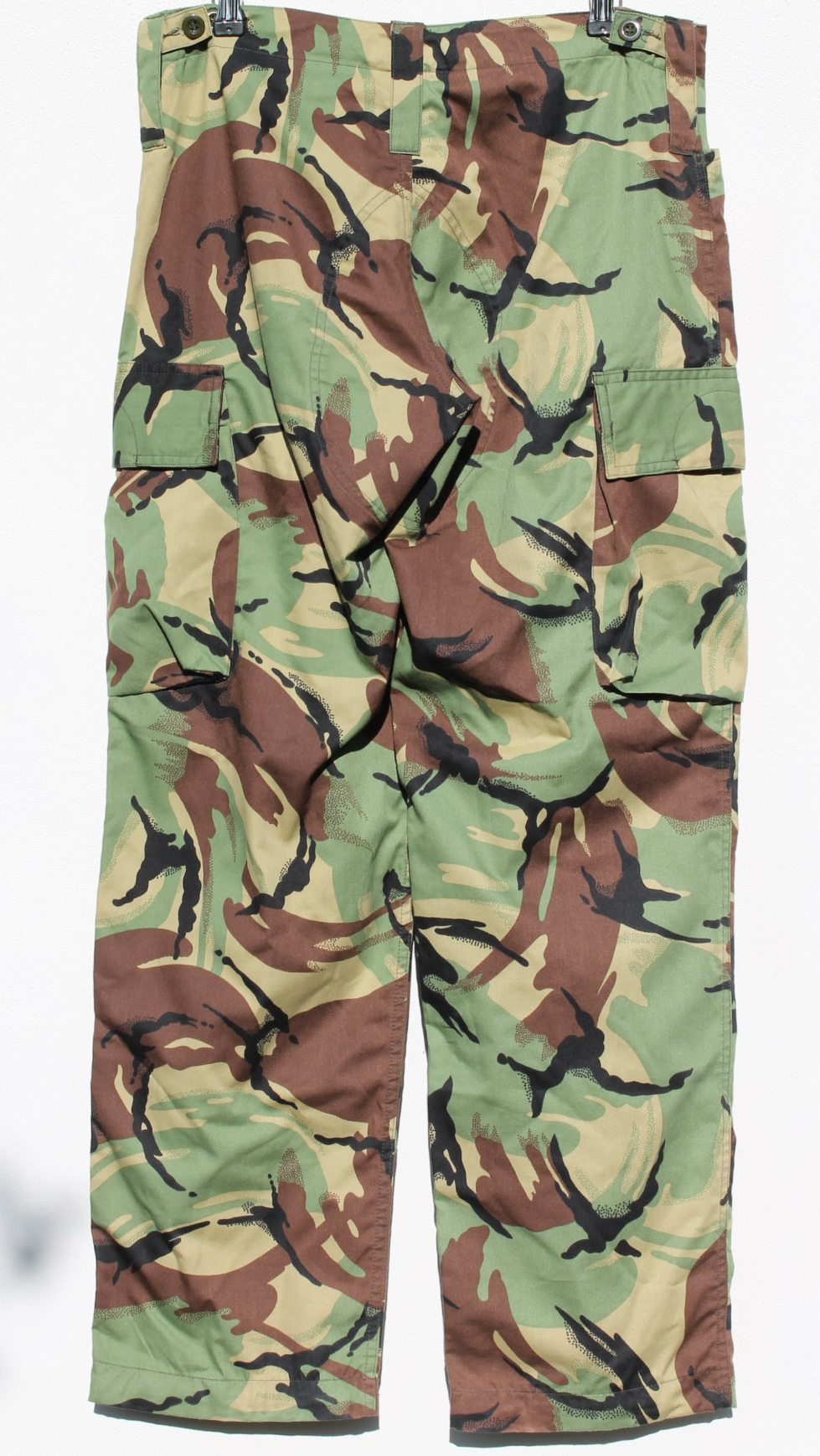 As with the shirt, the bottom line here is that these are new production variants on the classic ‘Trop’ jungle uniforms in DPM, which until a few years ago (when these examples were made) had not been updated for many years, if not decades.  These new examples use almost the same Tropical DPM pattern and most features are call backs to 80s and 90s British issue uniforms, but there are of course some modern features too.

It’s hard to know for sure whether the old originals were being manufactured at all over the past couple of decades, as there are so many small-quantity production batches of UK mil issued items that are barely known of online; if they’re even known of at all.  But I would presume the old Trops had probably not been made in many years and old stock had been depleted, which was the reason for the MoD to contract production of these newer garments with Level Peaks.  The DoD has also contracted for a lot of new jungle uniforms in the past few years as the US and UK prepare for what might happen in the jungles of Asia. 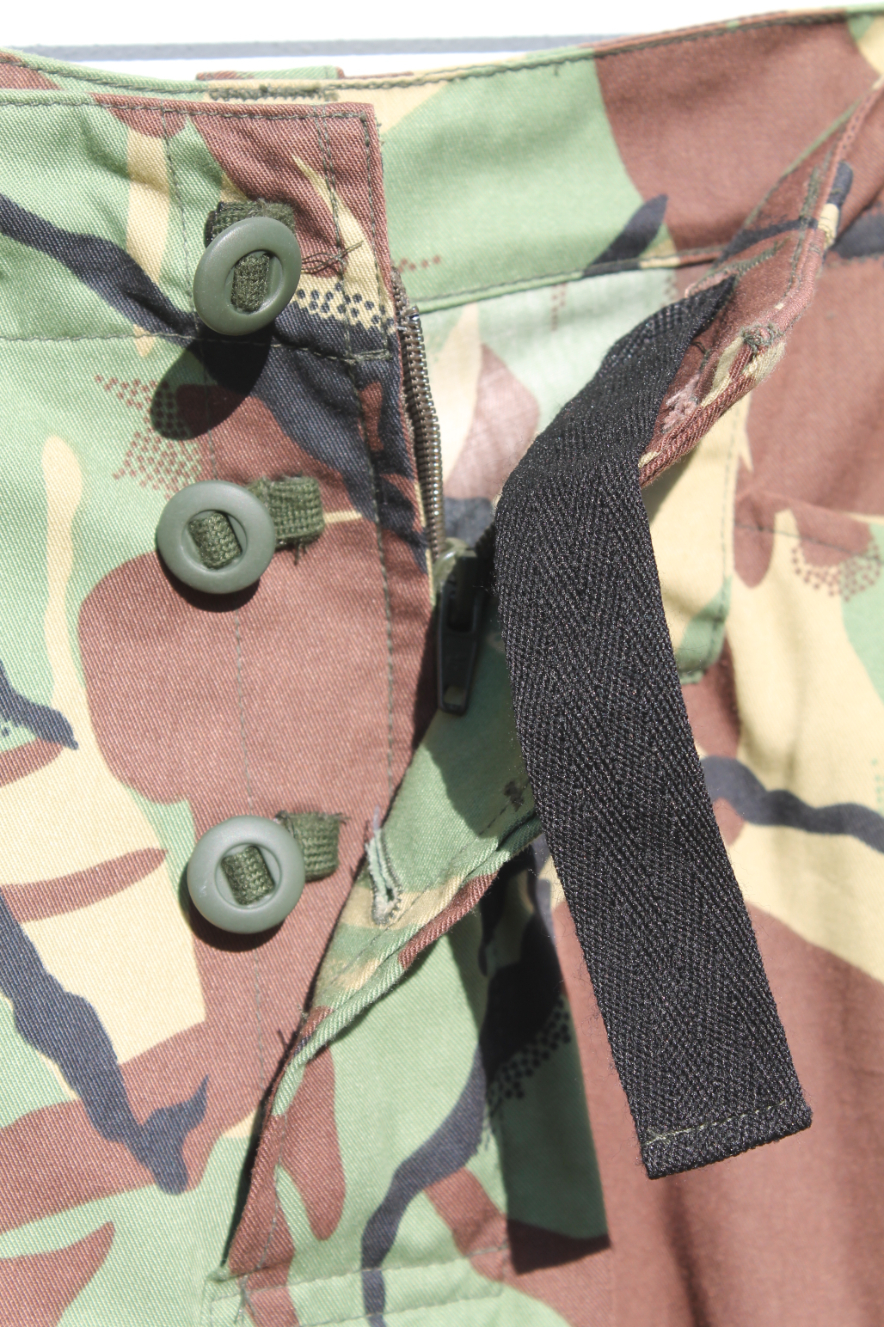 There’s a lot going on in the fly area, with a draw-string for the waist, a zip and 3 buttons for closure.  Where CS95 trousers had more of a coarse rope for the waist tie and no button fly, these trousers have a thin tape and then CS95 style buttons for the fly.  Back-ups are good in terms of fly closure course and these features remove the need for a belt, which is welcome when wearing webbing.  This whole arrangement might also be useful for allowing ventilation in the groin which is of course a high heat/sweat area. 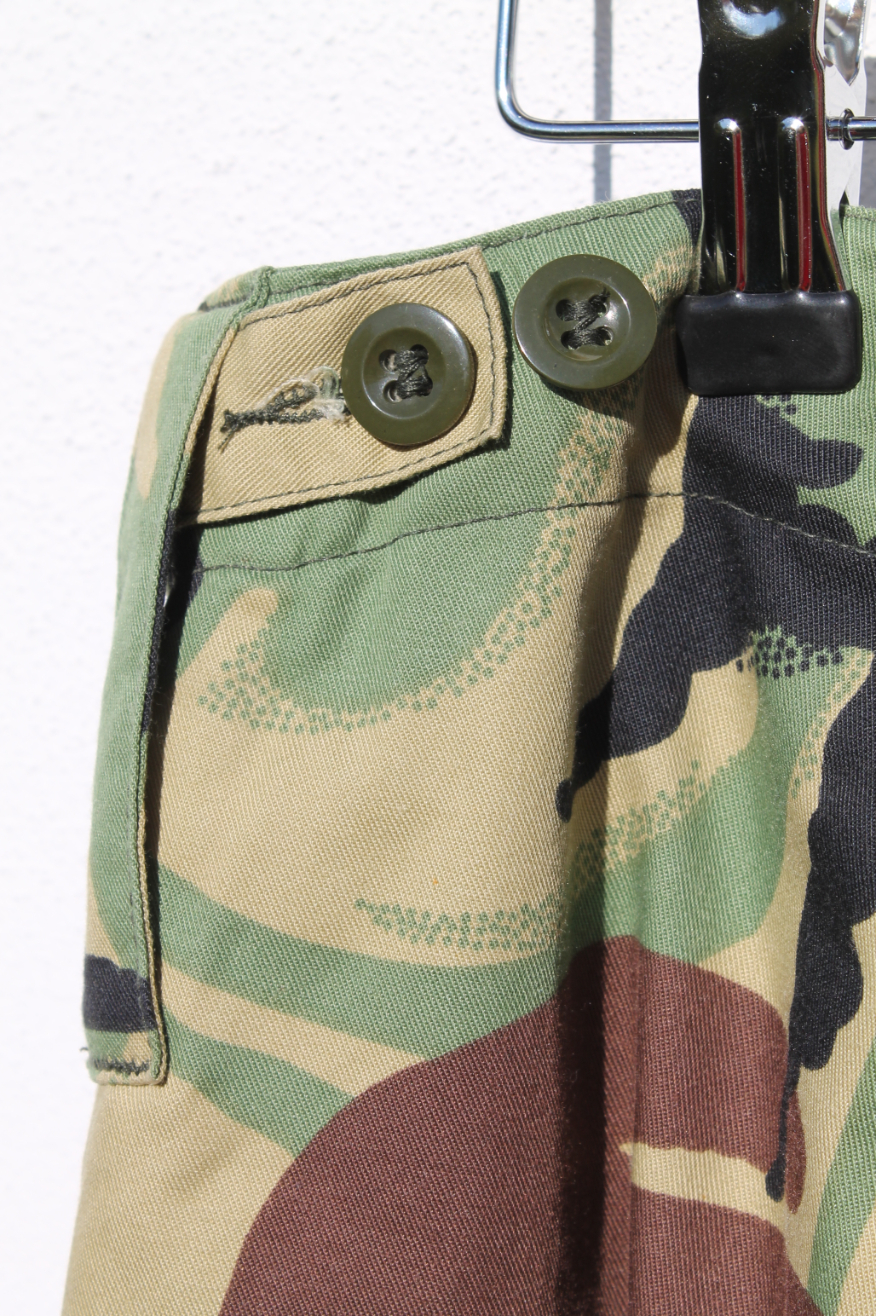 The decision to include both a waist tie and these other external buttons for waist size adjustment is a strange one, made even stranger by the use of some really 80s-looking OD green 4-hole classic buttons, where all the other buttons used on these trousers are new production and the Canadian/tape style.  It’s almost as if these have been put in place as some sort of aesthetic throwback.

As with all common British issue field-use trousers the belt loops are extremely tall and here they are nicely bar tacked top and bottom.  There are no rear pockets at all. 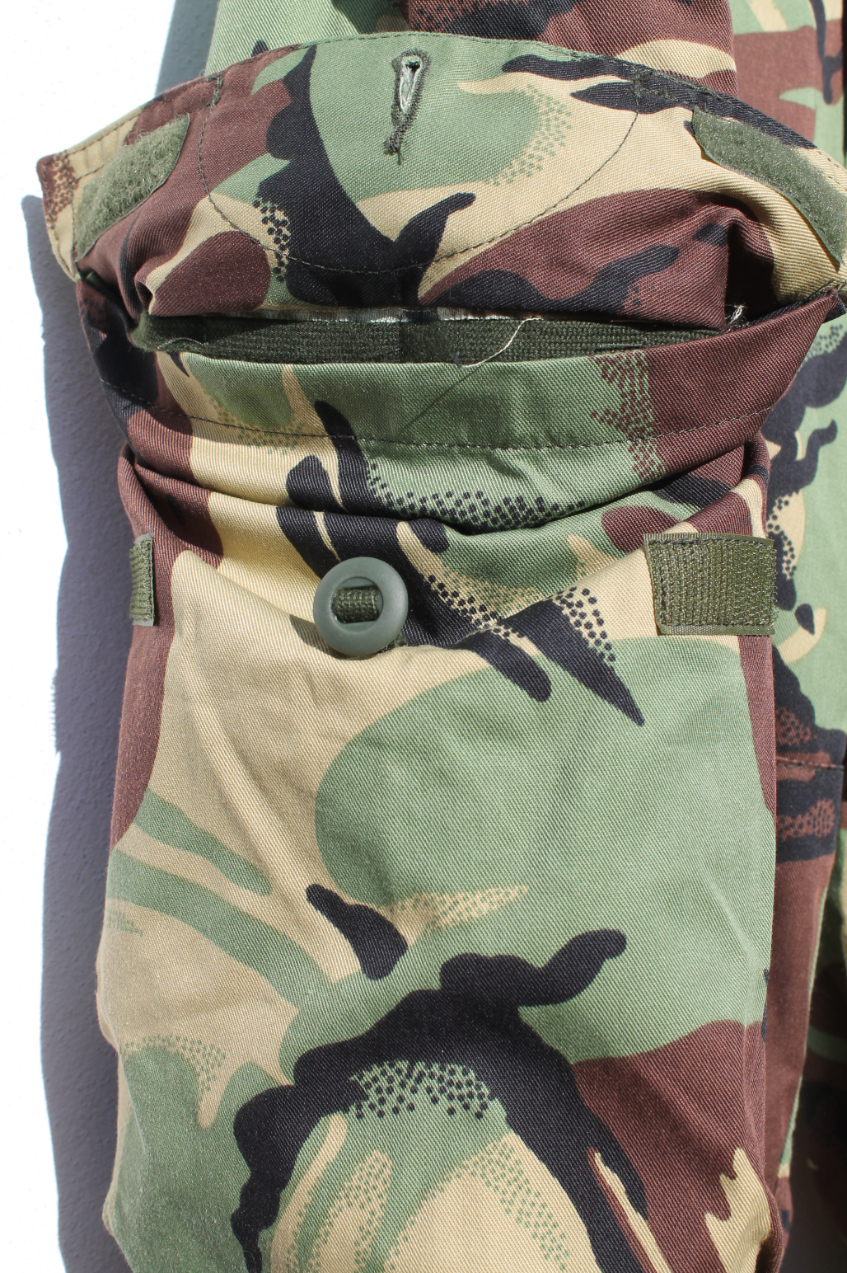 I don’t know the exact name for the layout of the pocket openings, but they are somewhat similar to a roll-top bag.  There’s extra fabric on the body of the pocket which extends upwards and folds over along with the flap, meaning the upper opening is very well sealed in terms of preventing any small items coming out; far more so than on a typical trouser pocket.

As with the short pockets, the outer/main cargo pockets close with both velcro and a button, though the hook and loop fields are both very small, as is the button, which is the same size as on the trouser’ fly and on the shirt.  On issued CS95 trousers there main trouser pockets have far larger buttons, around triple the diameter of these ones and they aren’t covered, which makes them far easier to use. 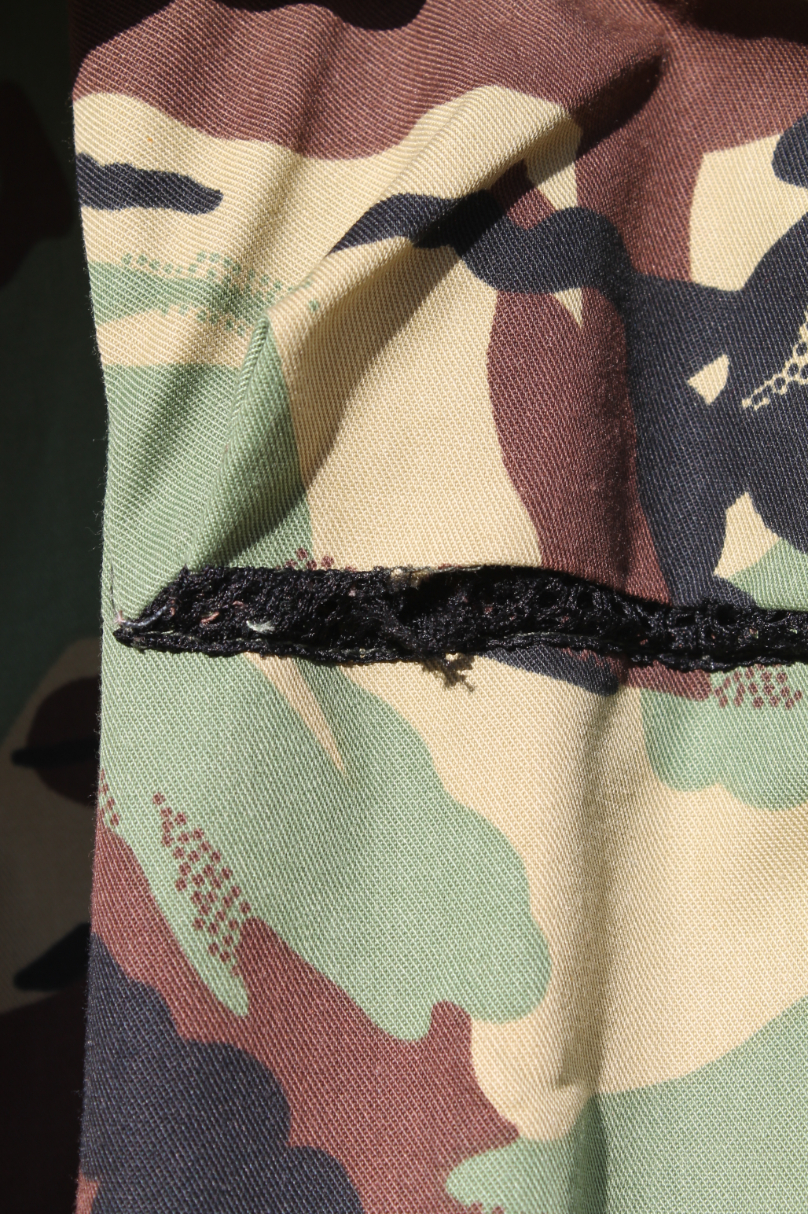 At their bases the main outer leg cargo pockets are made of mesh for a high level of drainage and some evaporation potential.  Though this is apparently something of a weak point as on my example pair there was an area where the mesh had torn away from its’ stitching despite the trousers clearly having seen very little use.  I’ve since had this repaired but I can’t say I would trust storing any heavy and/or pointed objects in these pockets.  Best reserved for gloves, maps and hats etc.

For ankle cuffs, I didn’t take a picture but there are drawstrings exactly like those on CS95 trouser, same design, same flat green cord, much better than the ribbon used in US issue stuff as it actually has friction and the knot stays tied.

Overall this ensemble is an unusual example of new production of a (mostly) old and classic design from the Cold War era.  I’m glad I was able to source a set that are good enough to actually wear.