Above image on the left – a couple of combat shirts made by Roman using torso fabrics and loop velcro printed by my buddies over at Vajra Tactical, with the original plain loop removed and replaced by Tactical Wolf – fully stitched to the shirt pockets.  Don’t DM Wolfy over there with tactical tailoring jobs though, he’s currently serving and right about now is either just about to leave for, or has just arrived in, theatre for a few months mandatory work holiday.

See my mate at TW does very good work but he’s always busy, always has a backlog and has to charge a reasonable rate for his labour.  Also guys who start out custom sewing on their own will always end up creating their own product lines to produce in quantity and end up stopping their custom services, because there’s infinitely less hassle and way more money in producing batches of the same thing compared to unique custom jobs.  I honestly spend a noticeable amount of my time on social media hunting down new, trustworthy tailors to replace the ones who’ve moved in to a different line of business; I’m constantly on the look out.

All of the above is why I want to bring the camo plates to the market as shown here in Tigerstripe, that and the fact there are millions of bits of gear out there which are mostly camo patterned but with fields of plain colour loop velcro on them.  As you can see from the first picture, the end result is aesthetically the same, yet the process to get there is far, far quicker and easier. 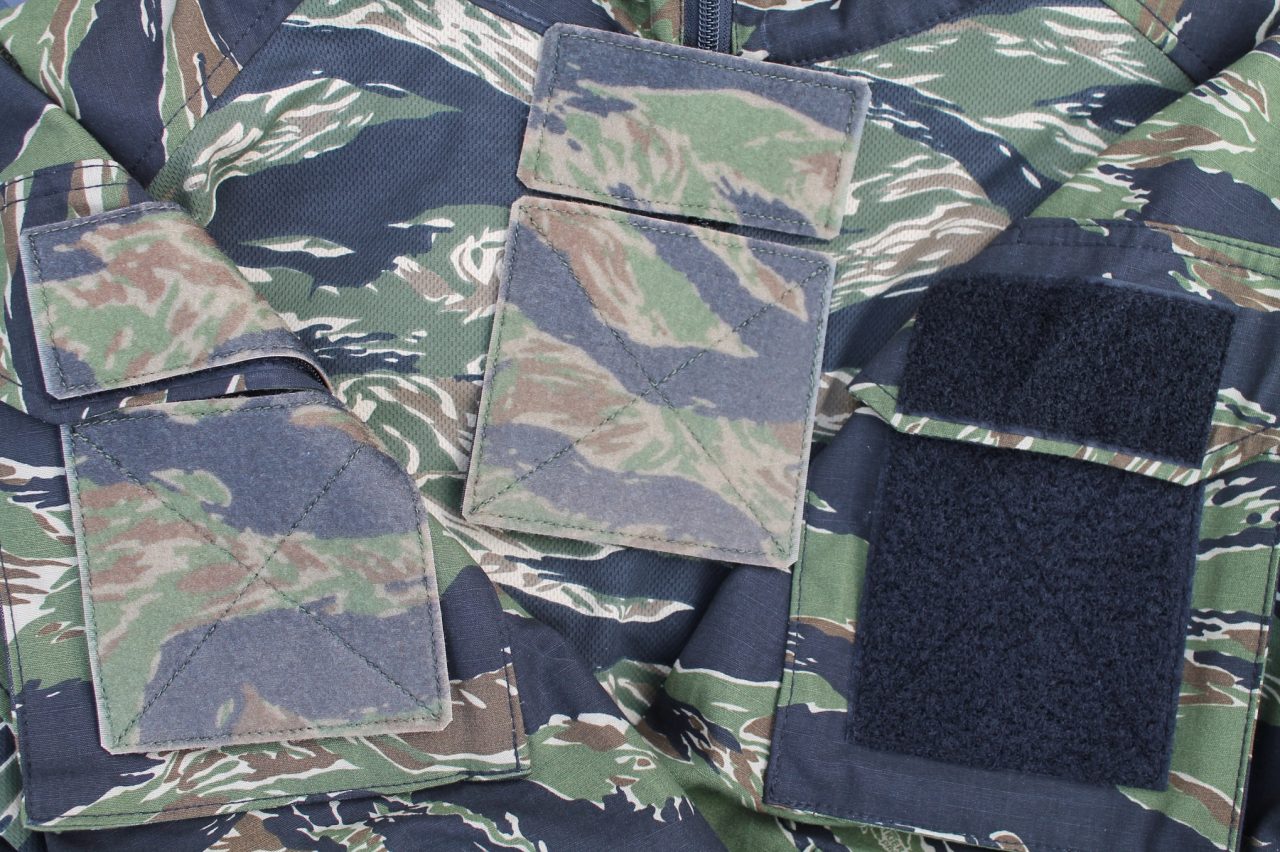 Vajra is the only company I know of on the planet earth who currently has the ability to just print out loop in any pattern and in small quantities at a low cost, so I’ve been talking with them about this for some time.  For those who might not know, the mil spec camo velcro you see today used by companies like FirstSpear, Crye and Spiritus is printed in minimum batches measuring hundreds and hundreds if not thousands of yards (priced at multiple dollars per yard) and it takes a lot to get that whole process setup and running.  That simply makes it impossible to have dozens of camos available including lots of niche stuff like Urban MOUT, Dot 44 and DPCU (to name but a few examples).

If you literally just want to be able to buy a cheap and simple cover panel that is hook-backed and can be slapped straight on to shirts and rigs to instantly add camo while still allowing for patch mounting on top, then stay tuned for more details as we work on making these things actually available for you to buy.