Just the bog standard one, from the first commercial batch.  US made not NSPA, original men’s cut, not FR, not Hot Weather.

My intention here as with all my posts on this site moving forward is to show a larger quantity or images and/or more detailed imagery of the item in question by comparison the retailer or manufacturers website.  I’ll also occasionally inject a few of my own opinions and applicable experiences as well as relevant and informative experiences reported to me by others where available, which should all help you folks out there when making your purchases. 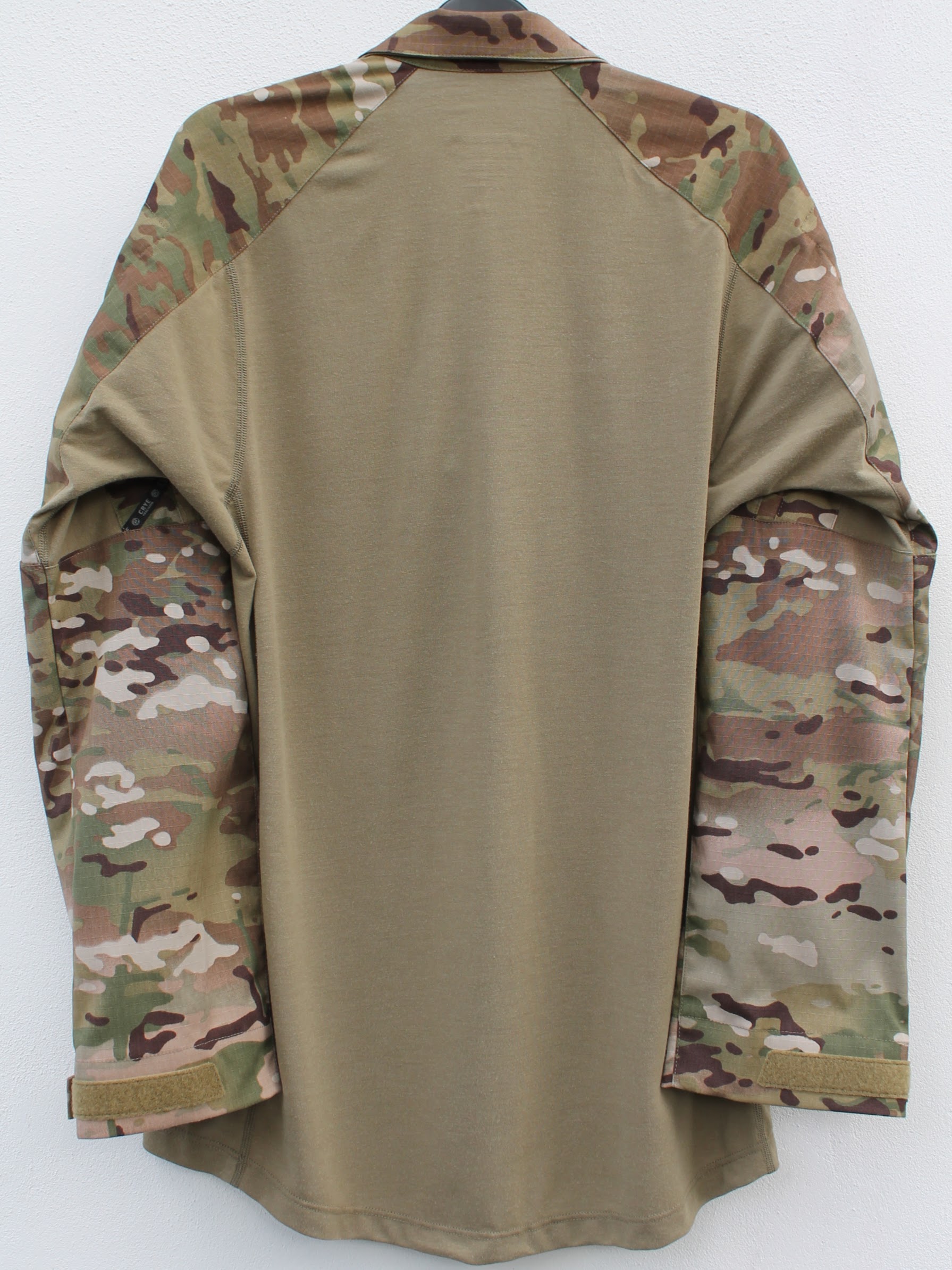 The G3 was sold for around 8 years between G2/AC and the G4 finally releasing because a combat uniform made of classic 50/50 NYCO had really hit it’s limit, you couldn’t design in any more features while still using that fabric, only change to slightly different ones.  The key thing that eventually made G4 happen was Crye moving over to a new fabric in the form of the 2-ways stretch VTX, which is still a NYCO blend but finally makes it possible to change the design layout of the uniform in a significant manner that is actually worth taking the time and effort over.

The stretch runs in line with narrower shapes in the pattern, so on this shirt for example if you were wearing it and pull downwards on the end of the cuff it won’t stretch, but if you grabbed the side of a sleeve and pulled there is a little bit of give.  This seems fairly inconsequential in a shirt where the previous design never had stretch panels like the trousers did, but then again a little extra flexibility never hurt. 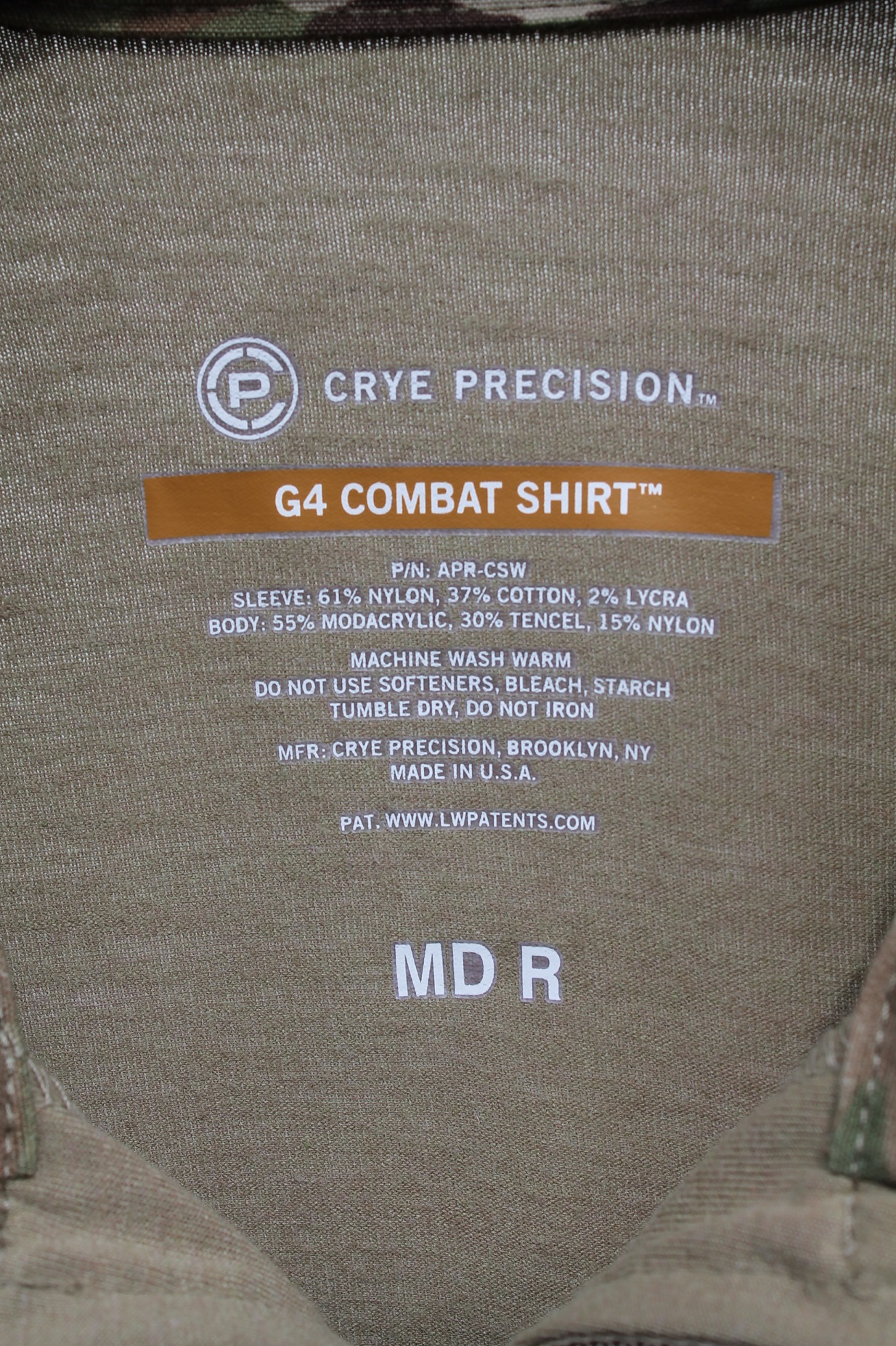 Heat-transfer internal label sits between the shoulder blades with material composition details for the collar/shoulders/sleeves and the torso fabric separately. 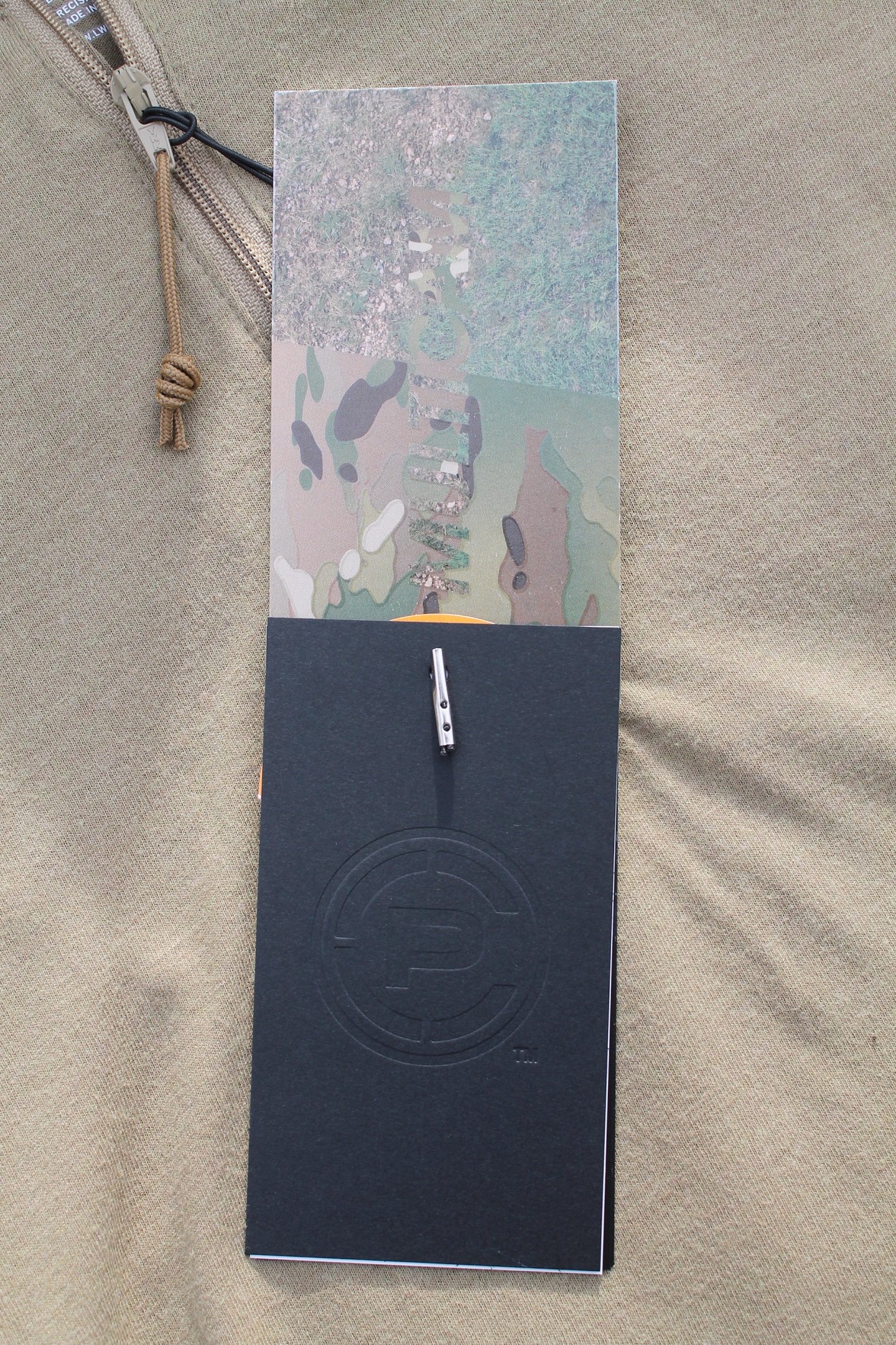 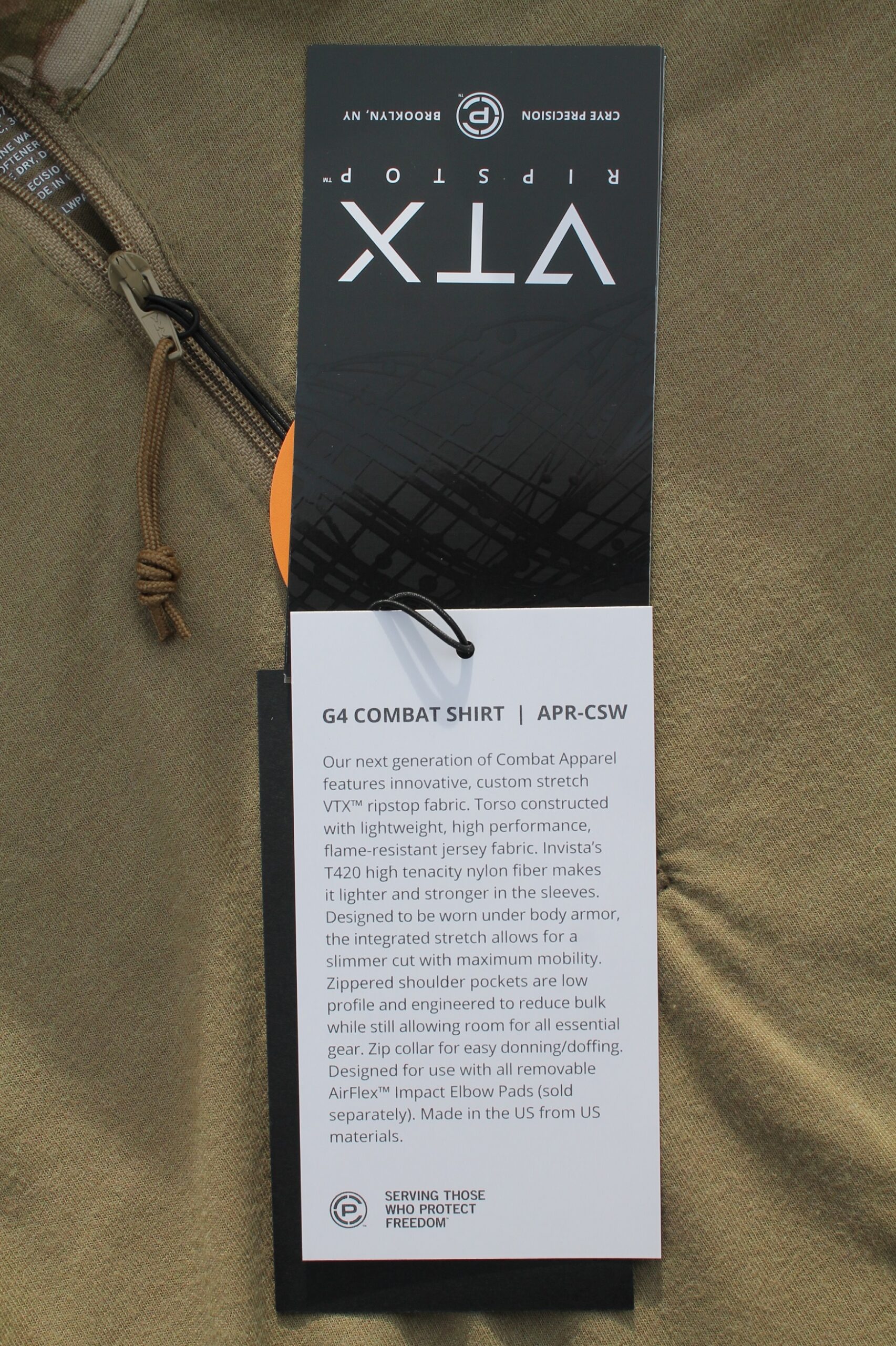 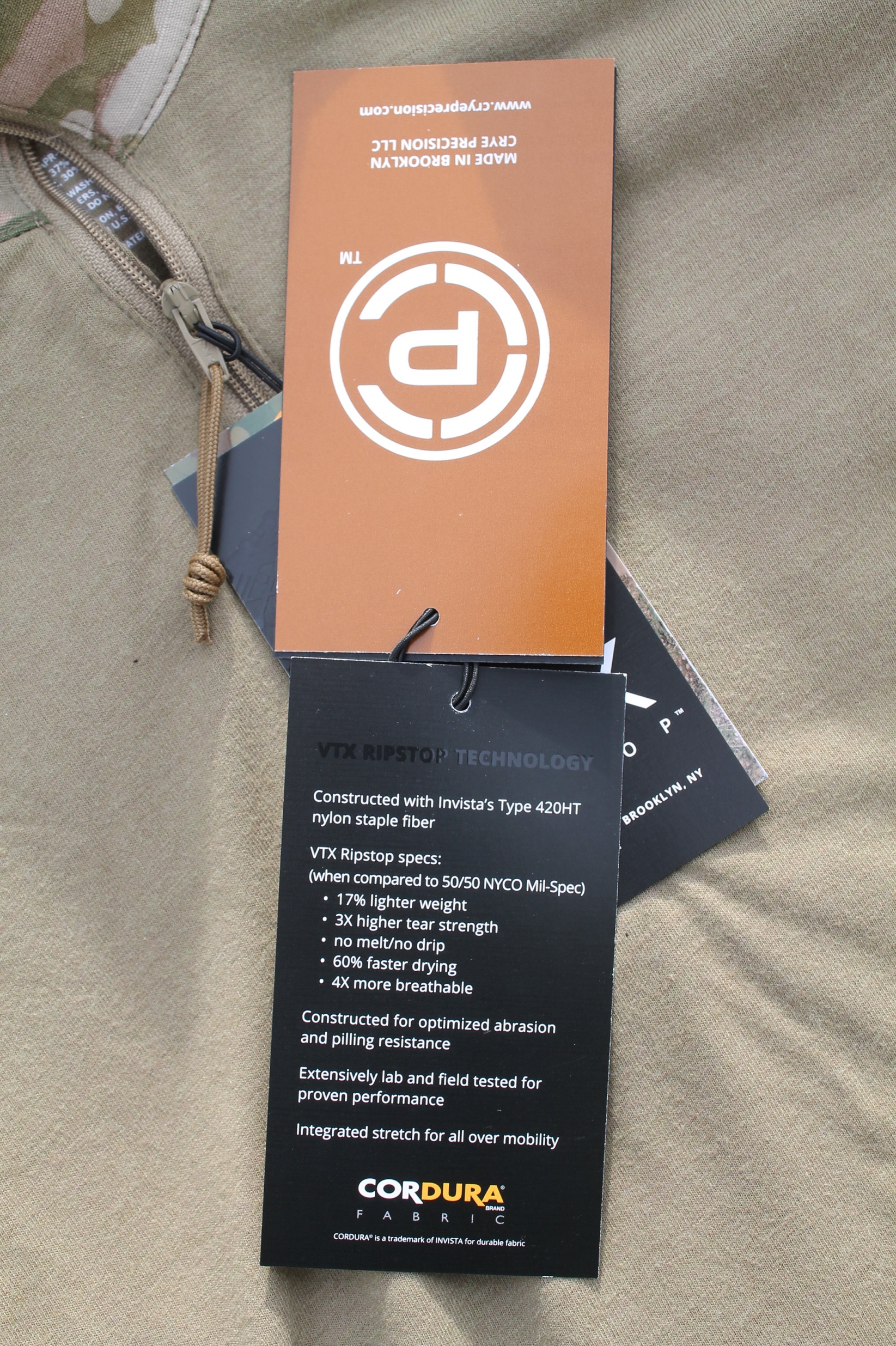 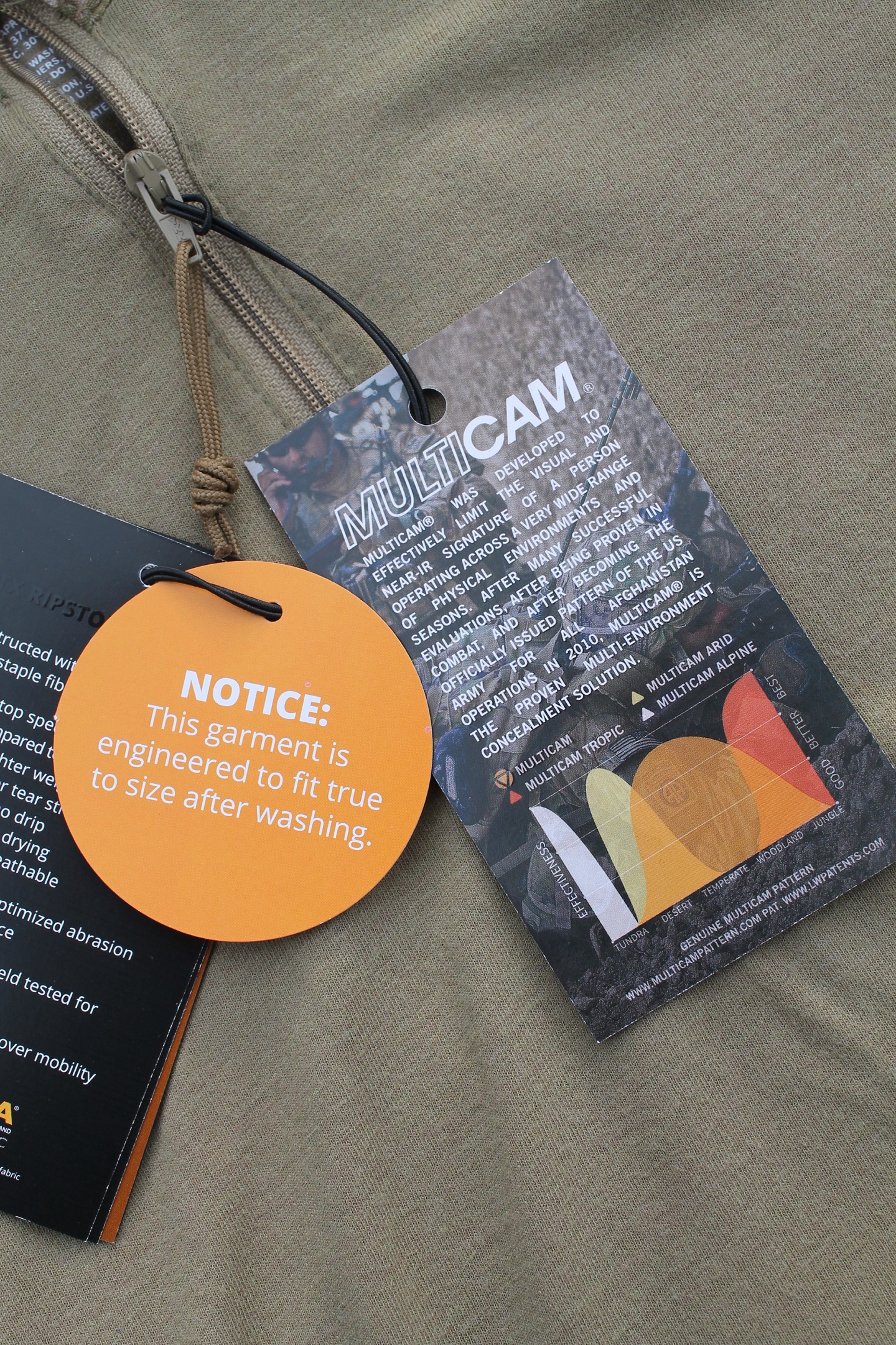 There’s a substantial number of cardboard hang tags attached with some technical details on the apparel and on Multicam as a pattern/pattern family, which seems odd to me at this point.  They could save a lot of printing by just attaching a QR code on one tag, or even putting it on the bag.  This many packaging labels seems almost a bit like show-boating  over the new fabrics frankly. 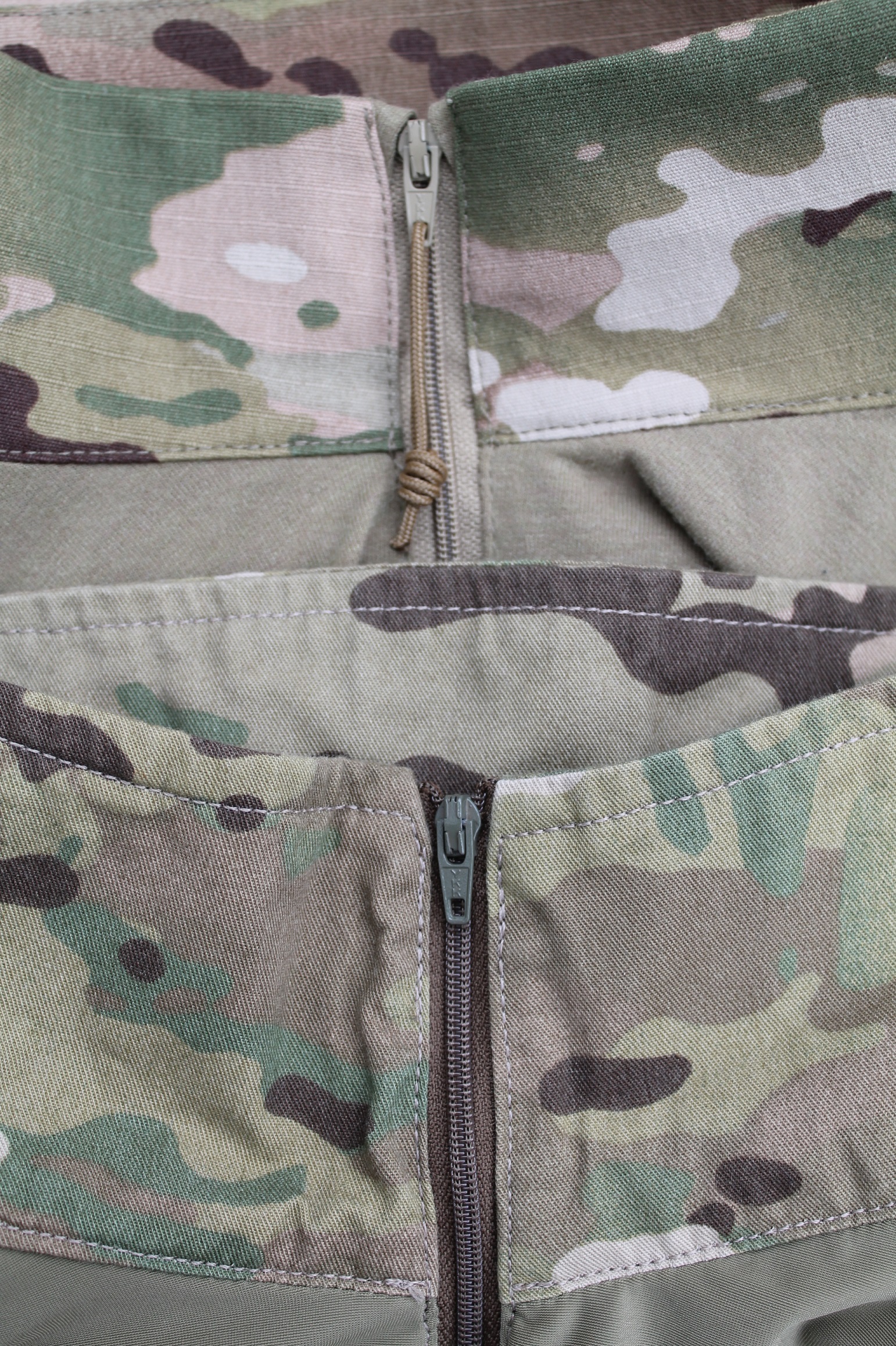 I’ll make two small comparisons between the G4 shirt and the G1 combat shirt I also have since I think they’re pretty interesting.  First of the collar zip is exactly the same YKK between both variants, almost 20  years apart.  The G4 is far better protected on the inside, but externally there’s almost no difference. 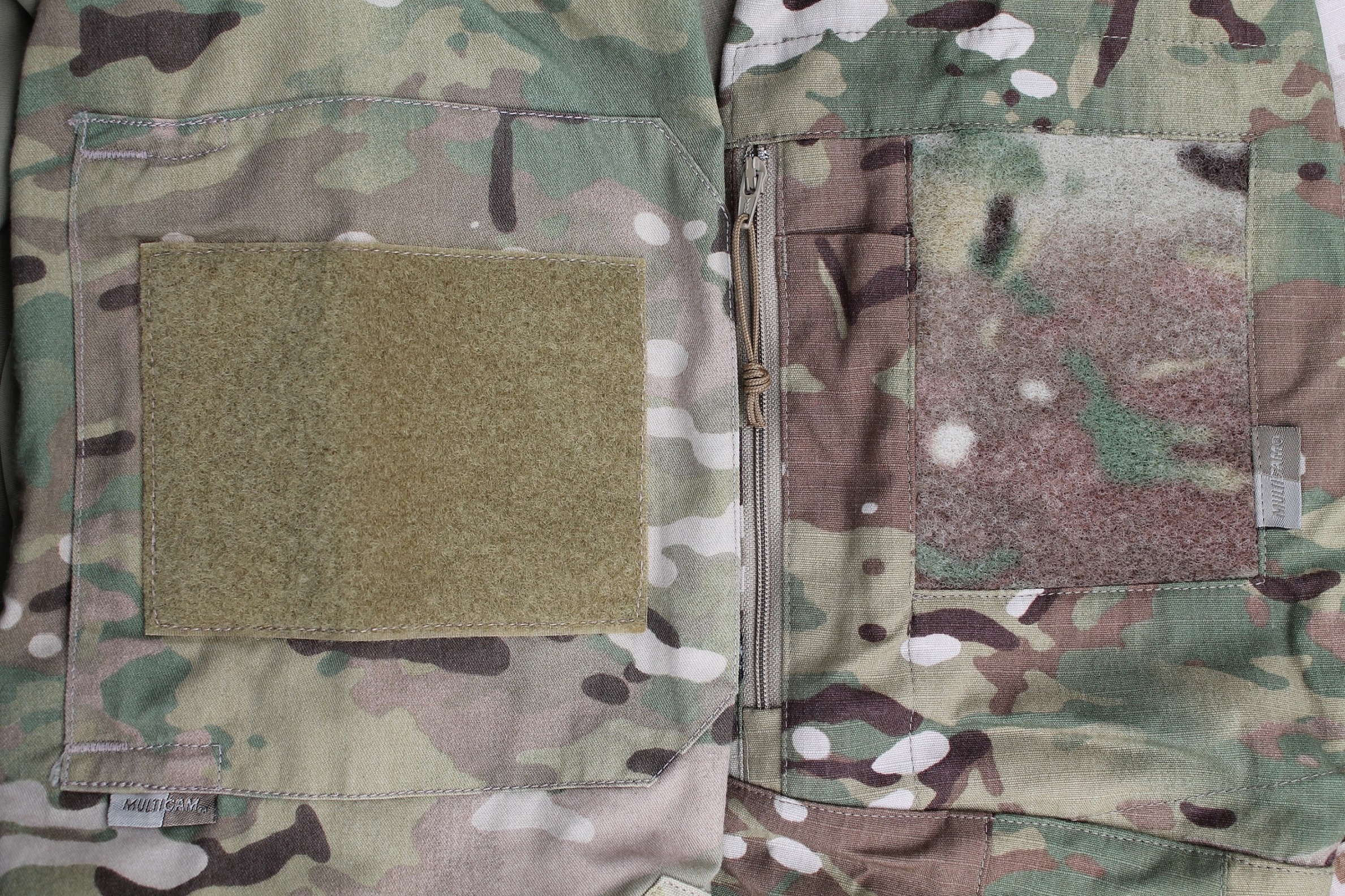 Secondly, the upper arm pockets.  While the G4 pocket is internal where the G1 was external, capacities are quite close and the loop field is almost the exact same size just rotated 90 degrees.   You can’t see the side zip closure on the G1 here but it works extremely similarly to the G4, whereas G2 and G3 inbetween of course had the top opening pockets with velcro closure.  What’s old is new again. 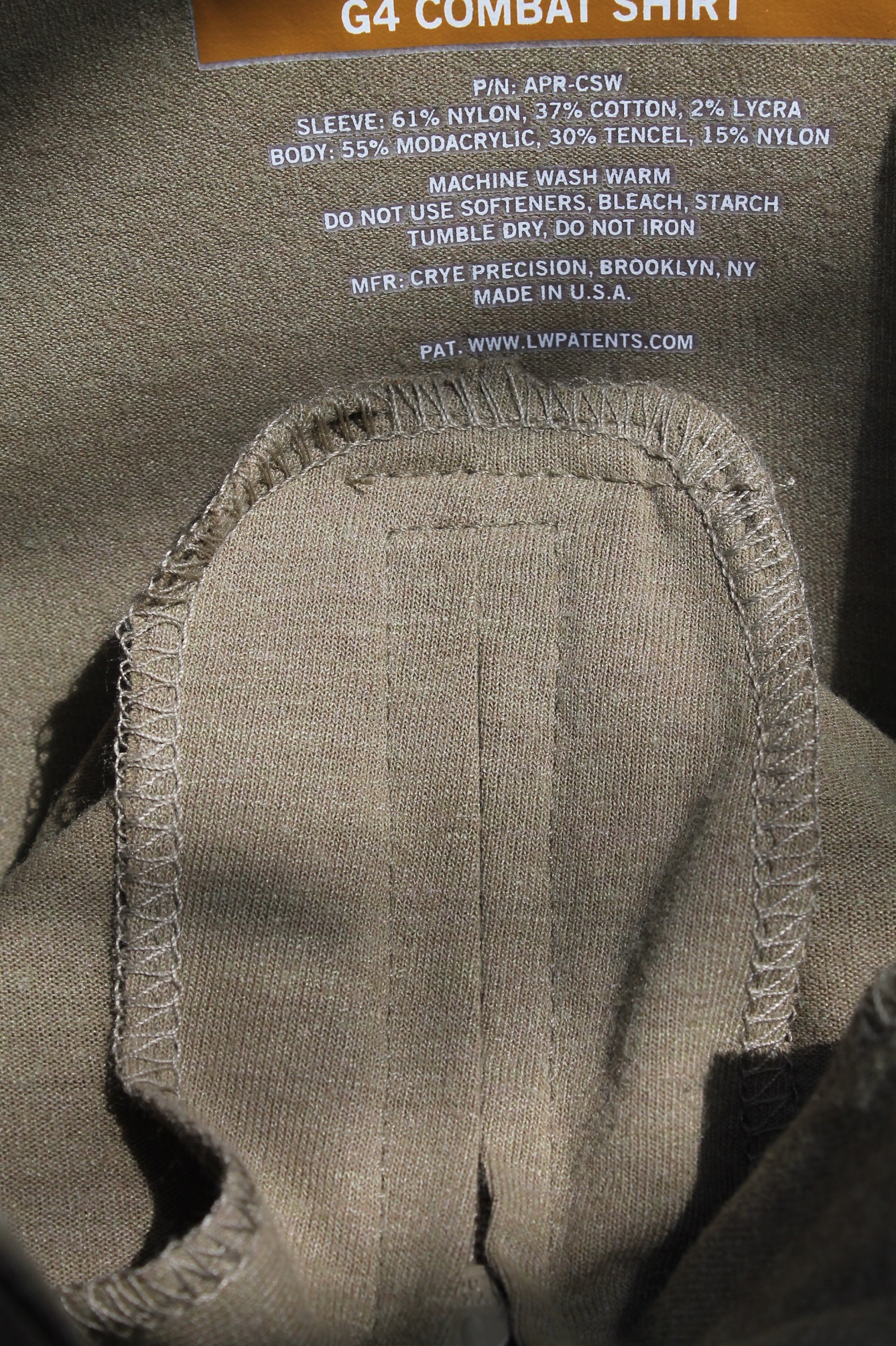 As mentioned, one significant difference between early gen combat shirts and the G4 is that the ending and inner face of the collar zip is fully enclosed and covered with the soft torso fabric. 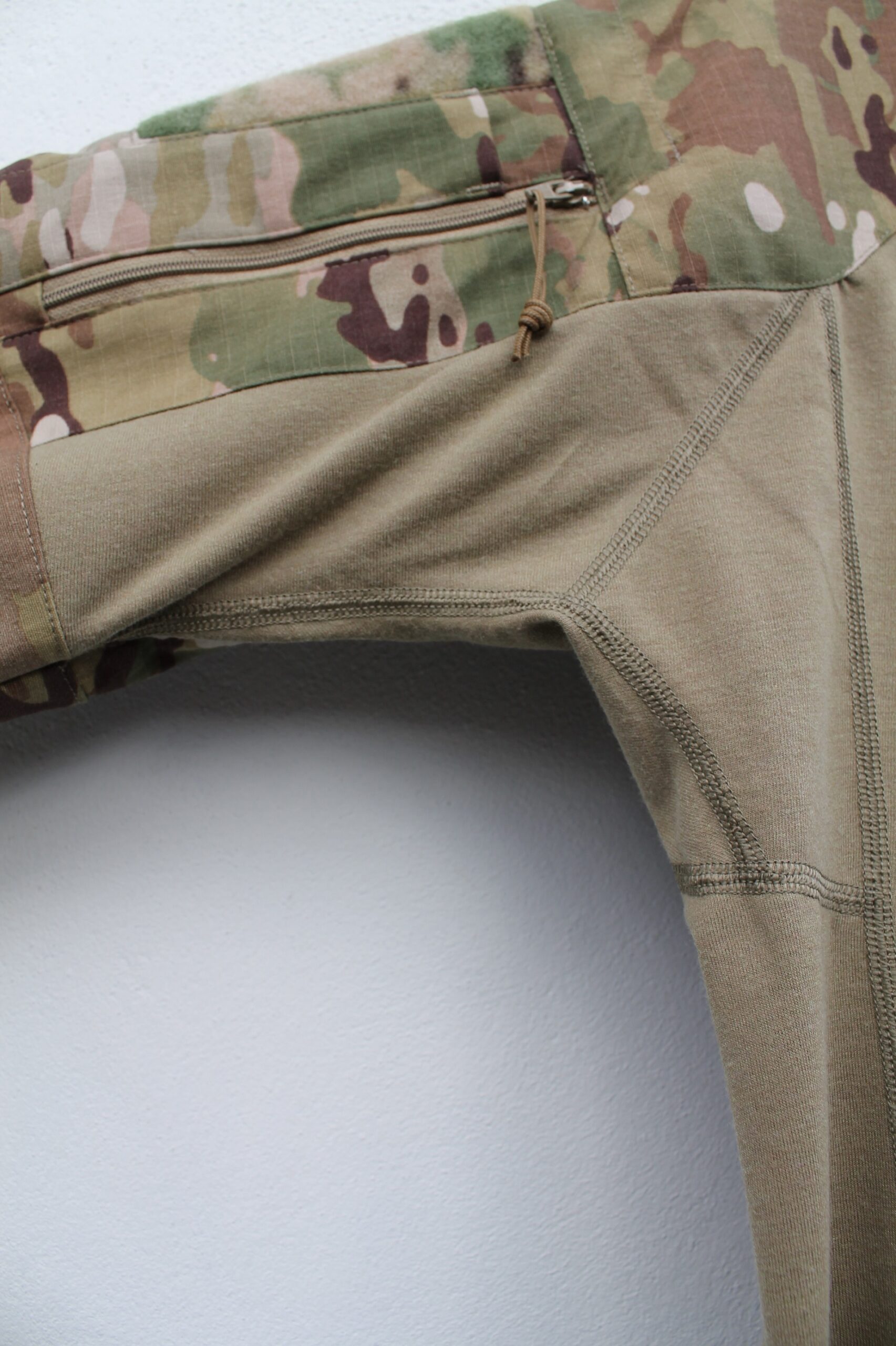 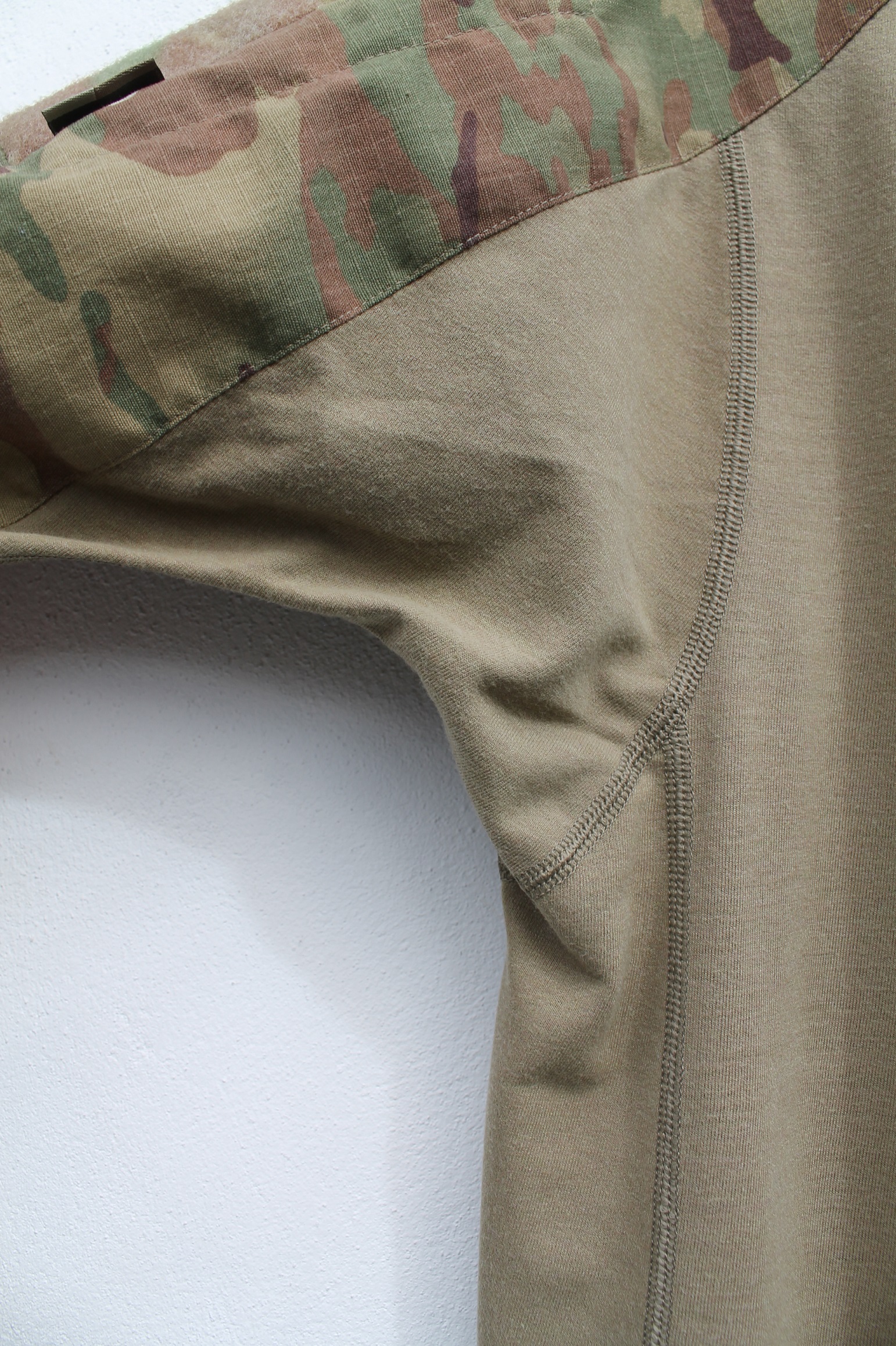 Prototypes of the G4 combat shirt actually had a mesh arm pit area like the Arc’teryx Assault Shirt AR/Gen 2, but the torso fabric for G4 has such good air and moisture permeation and transport rate that the mesh was deemed unnecessary.  There’s a lot of anatomical shaping in this area compared to the cheaper tubes of fabric user on many budget shirts and the stitching is about as flat as physically possible for this fabric.   This all adds up to minimising friction against the wearer’s skin. 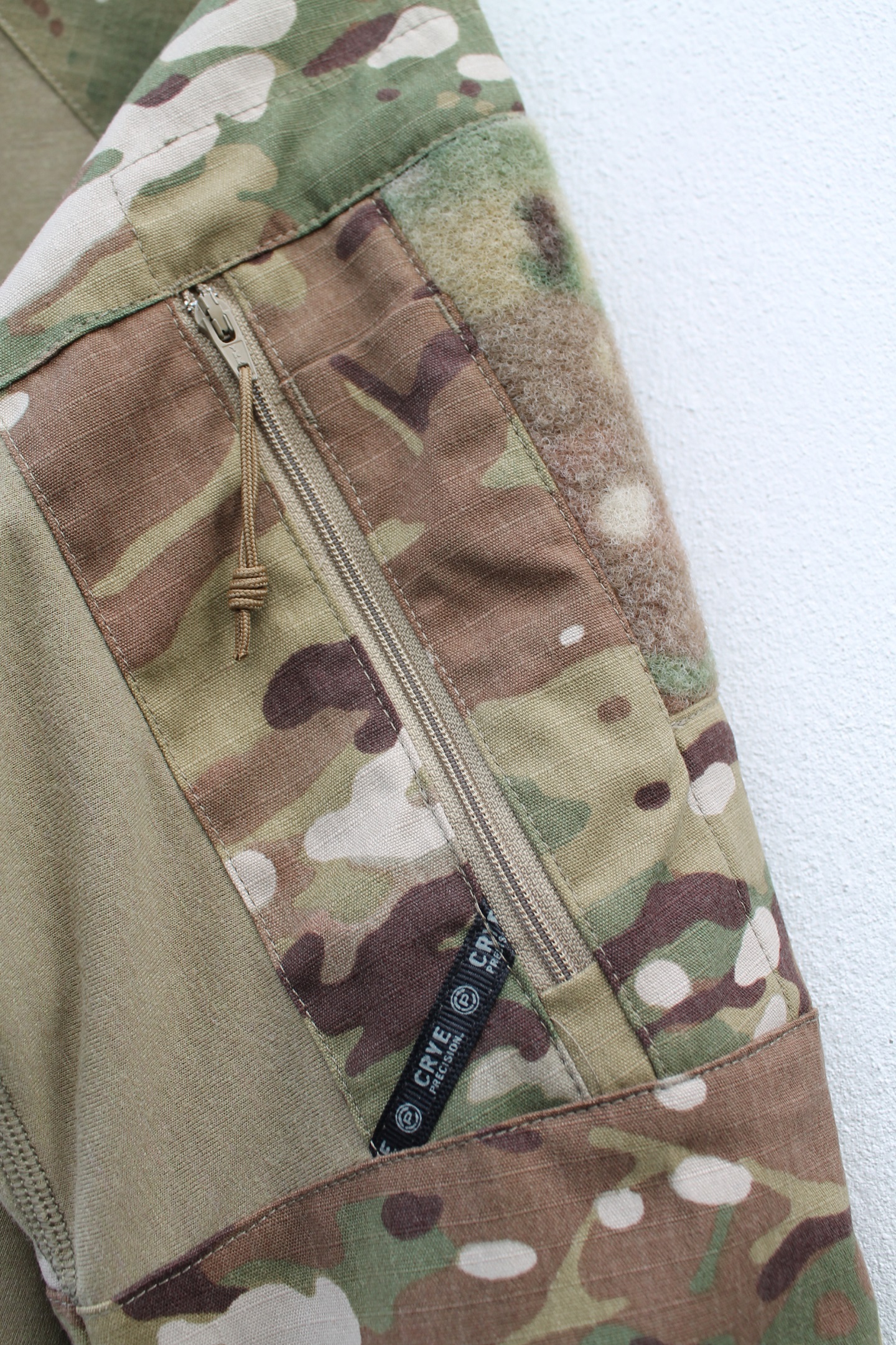 Going to this vertical zip opening for the arm pockets makes sense in terms of small items security and ease of access with the opposite hand, but why there is no garage for the slider when the pockets are closed is a mystery to me.  Doubly so that they seem to have garages when opened.  Being able to see the silver coloured crimps on the end of the zip is a strange thing that doesn’t give off an impression of quality. 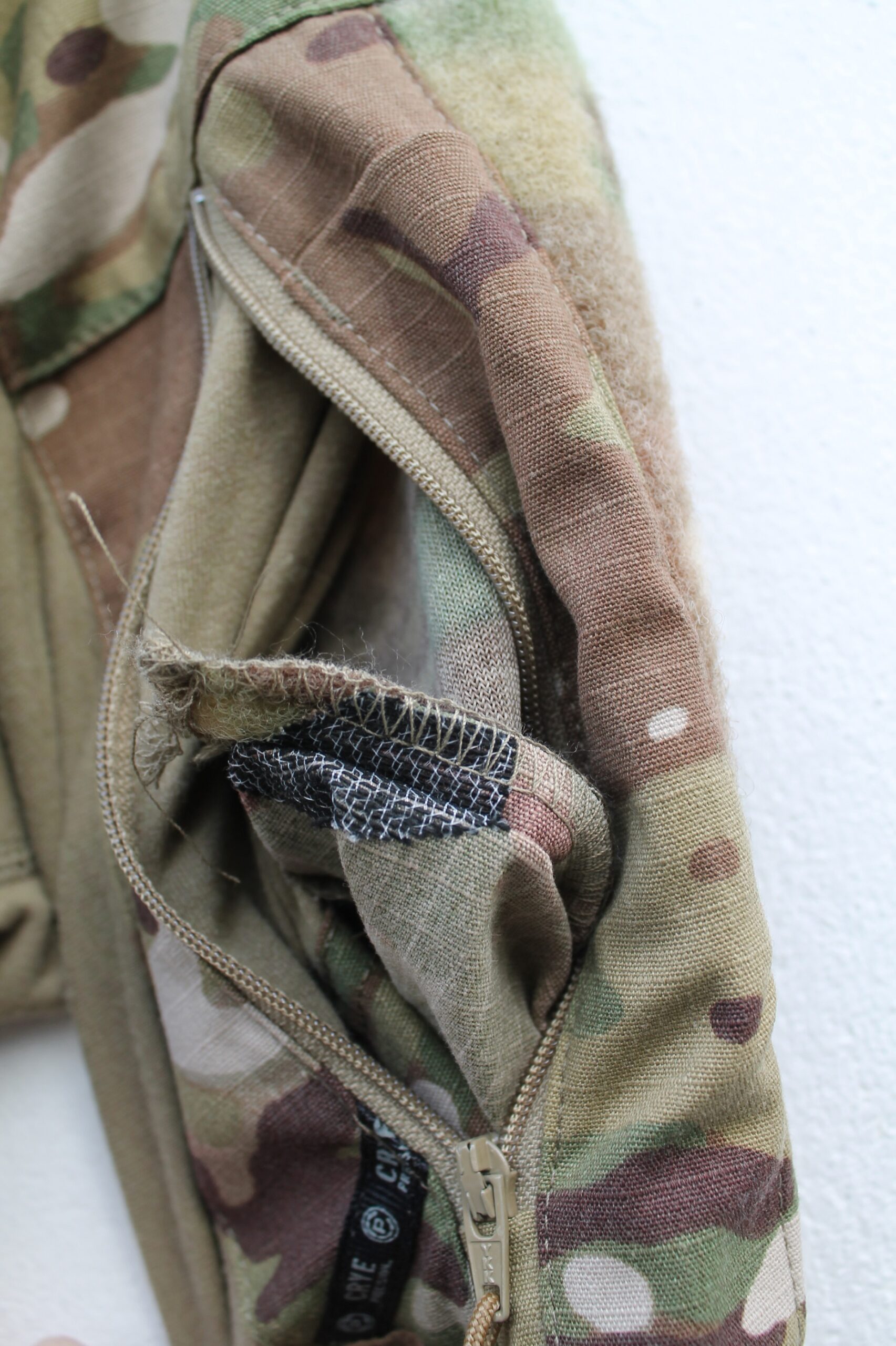 Pulling the inside of an arm pocket out you’ll find some strong reinforcement in the far bottom corner.  I am unsure exactly what type of fabric has been used in this small non-camo piece here and it’s really buried in there so most will never see it.  But the most common areas of pockets I have seen fail are corners and if those holes get big enough you can lose small items that will tend to naturally migrate in to those corners. 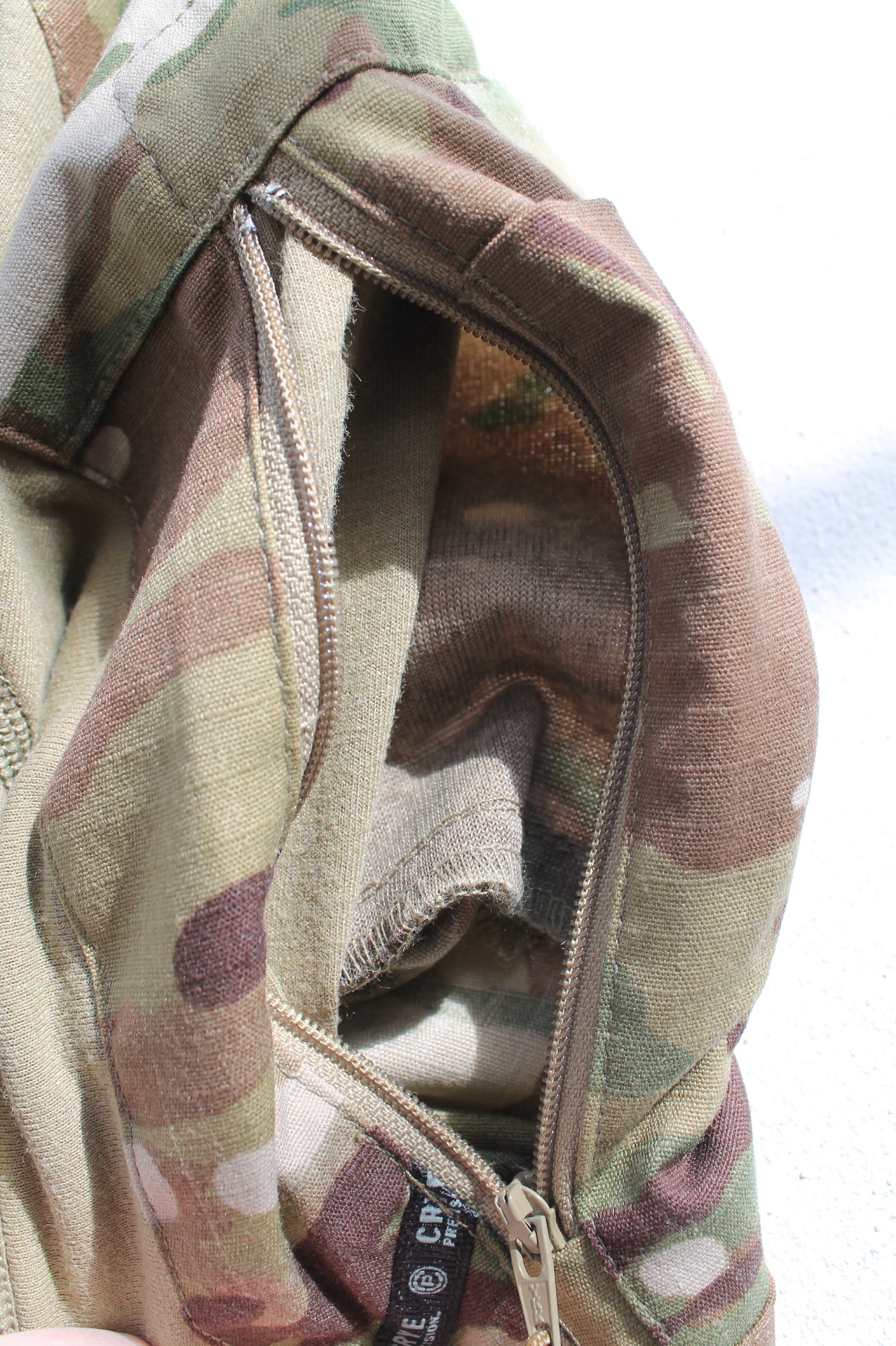 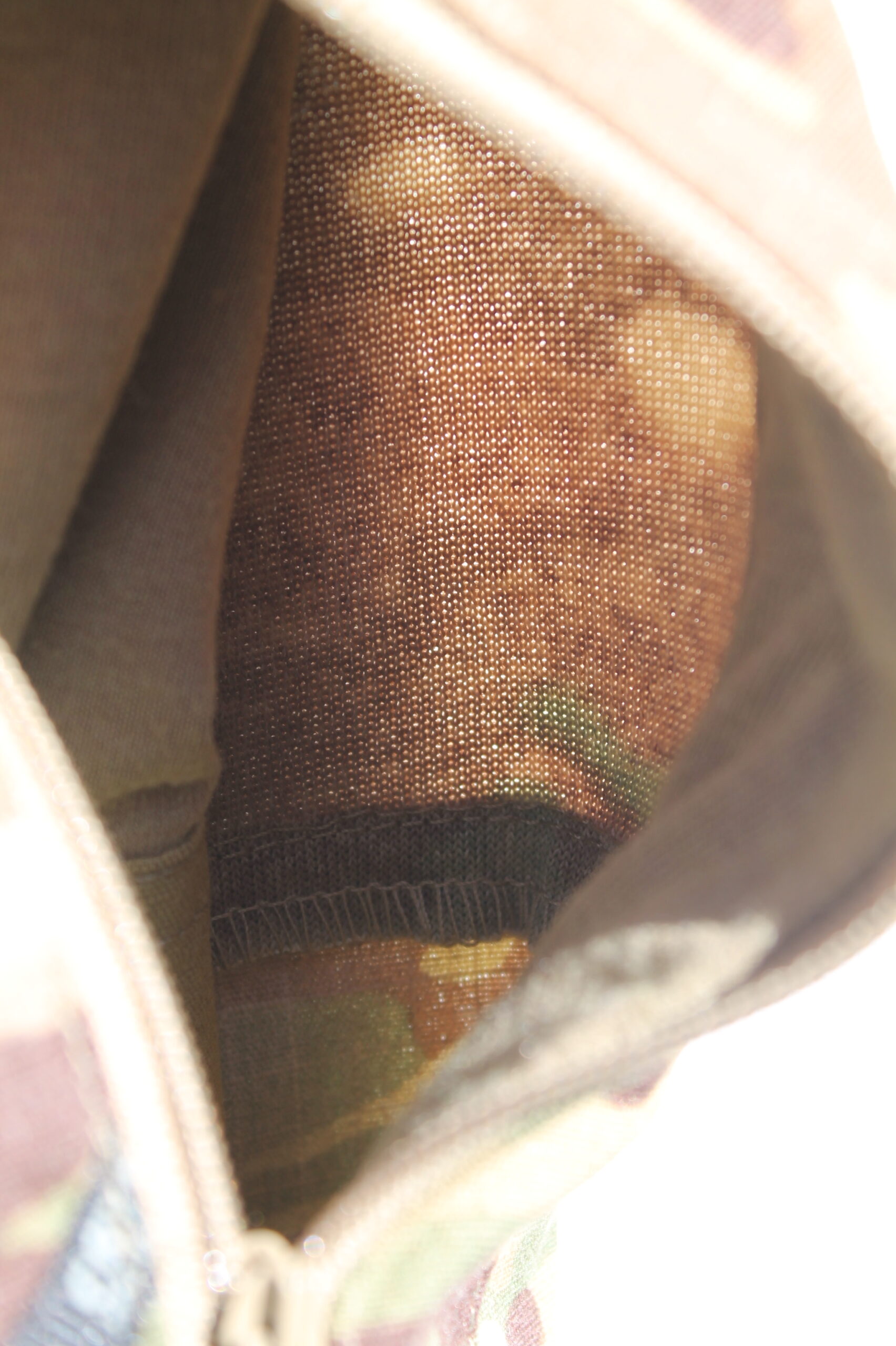 Something unique with the G4 shirts is that the upper arm loop fields basically plug rectangular holes in the sleeves, the loop is not sewn on top of NYCO fabric.  This may be a little hard to imagine if you’ve never seen it before, but the areas in which the rip-stop grid are and aren’t visible inside the pocket in the image above hopefully shows where the VTX NYCO stops and the loop velcro begins. 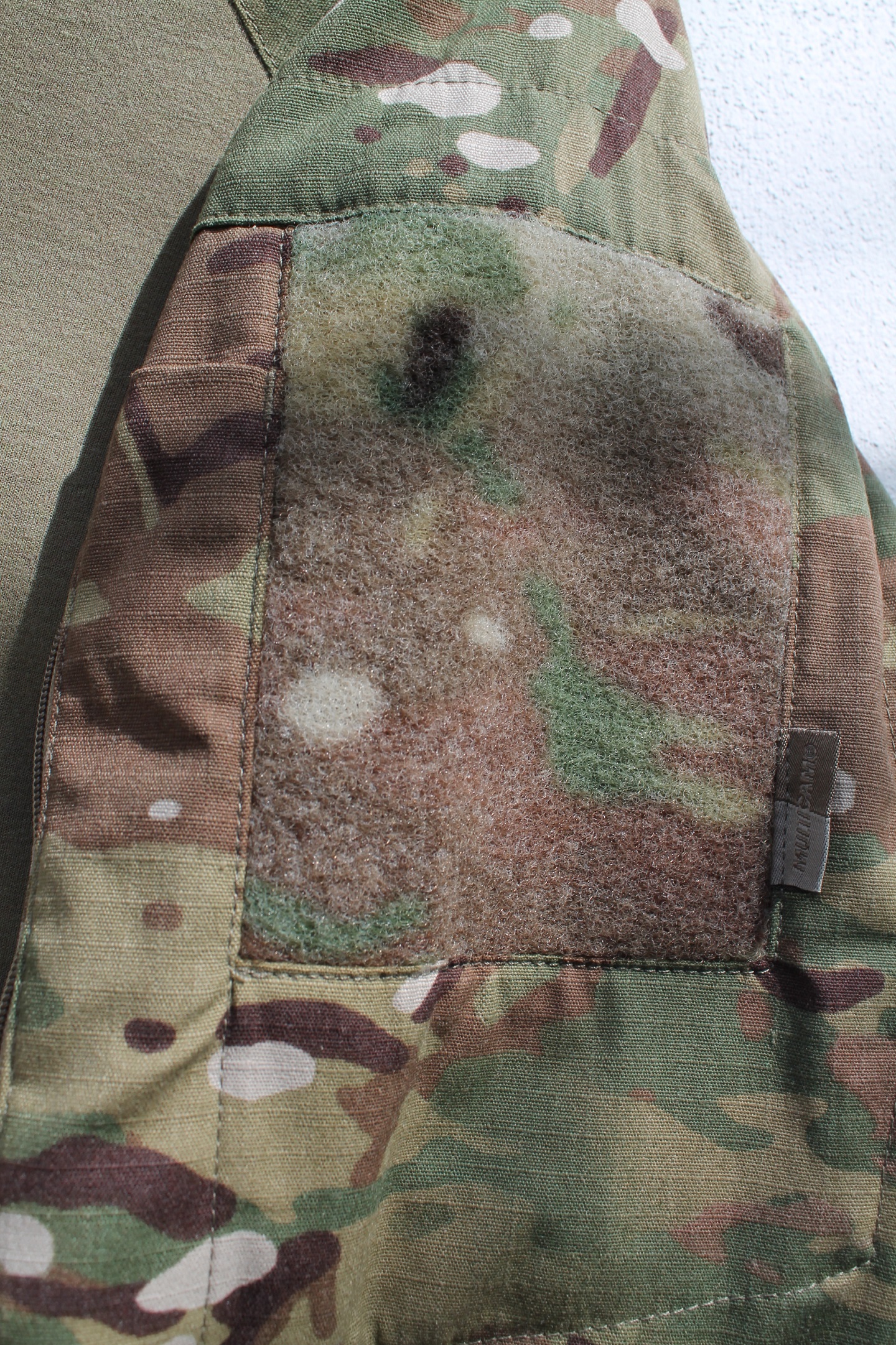 Though subtle and neatly integrated, there are pen pockets inbetween the zips and loops fields on both arm pockets.  The opening to one is visible here in the form of  an unstitched ledge in the fabric in the upper left.

For some reason only standard MC has the pattern matched velcro loop, but we can perhaps hope they release full camo versions of the Arid, Tropic and Black some day as they have for original Multicam. 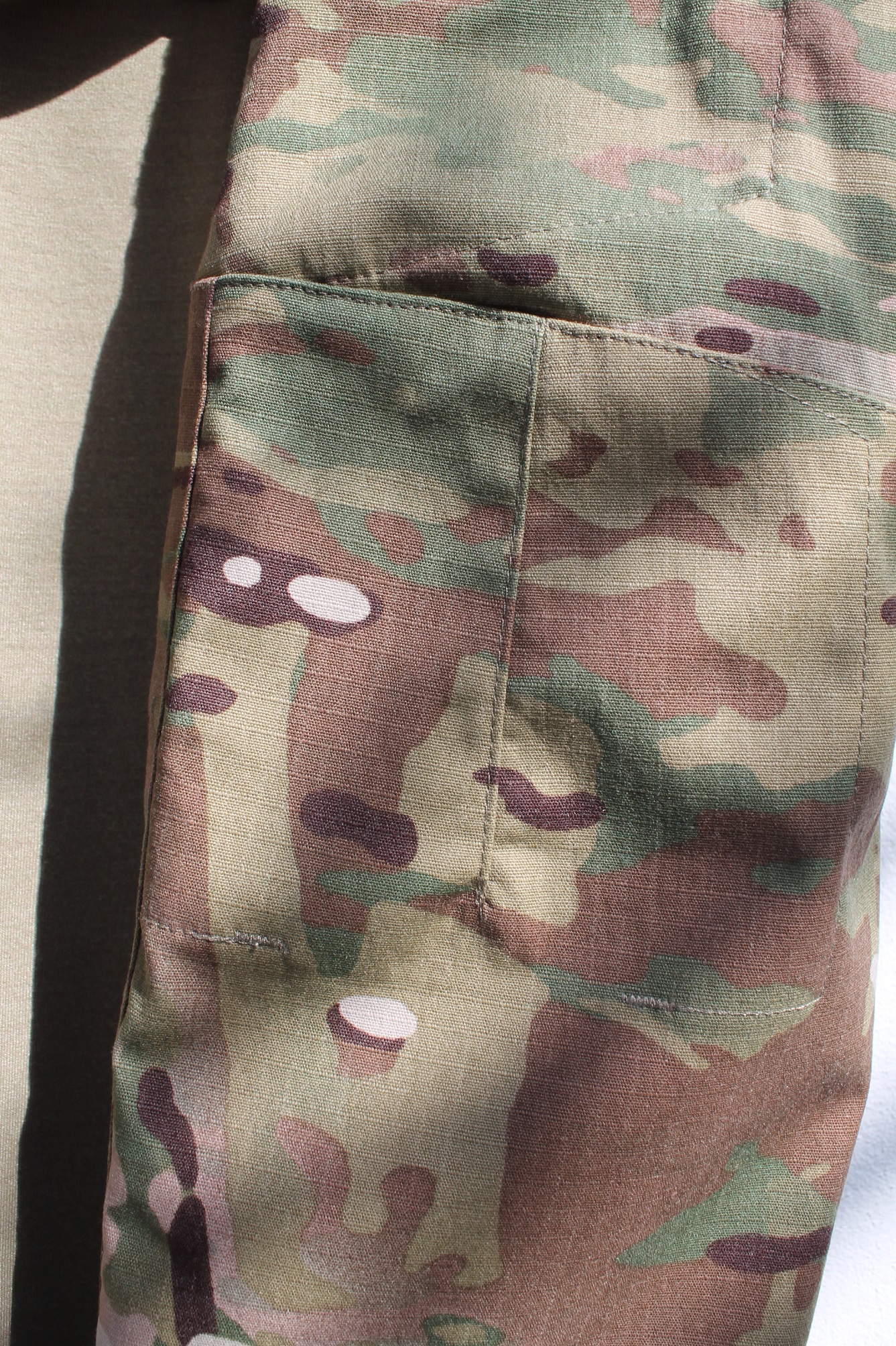 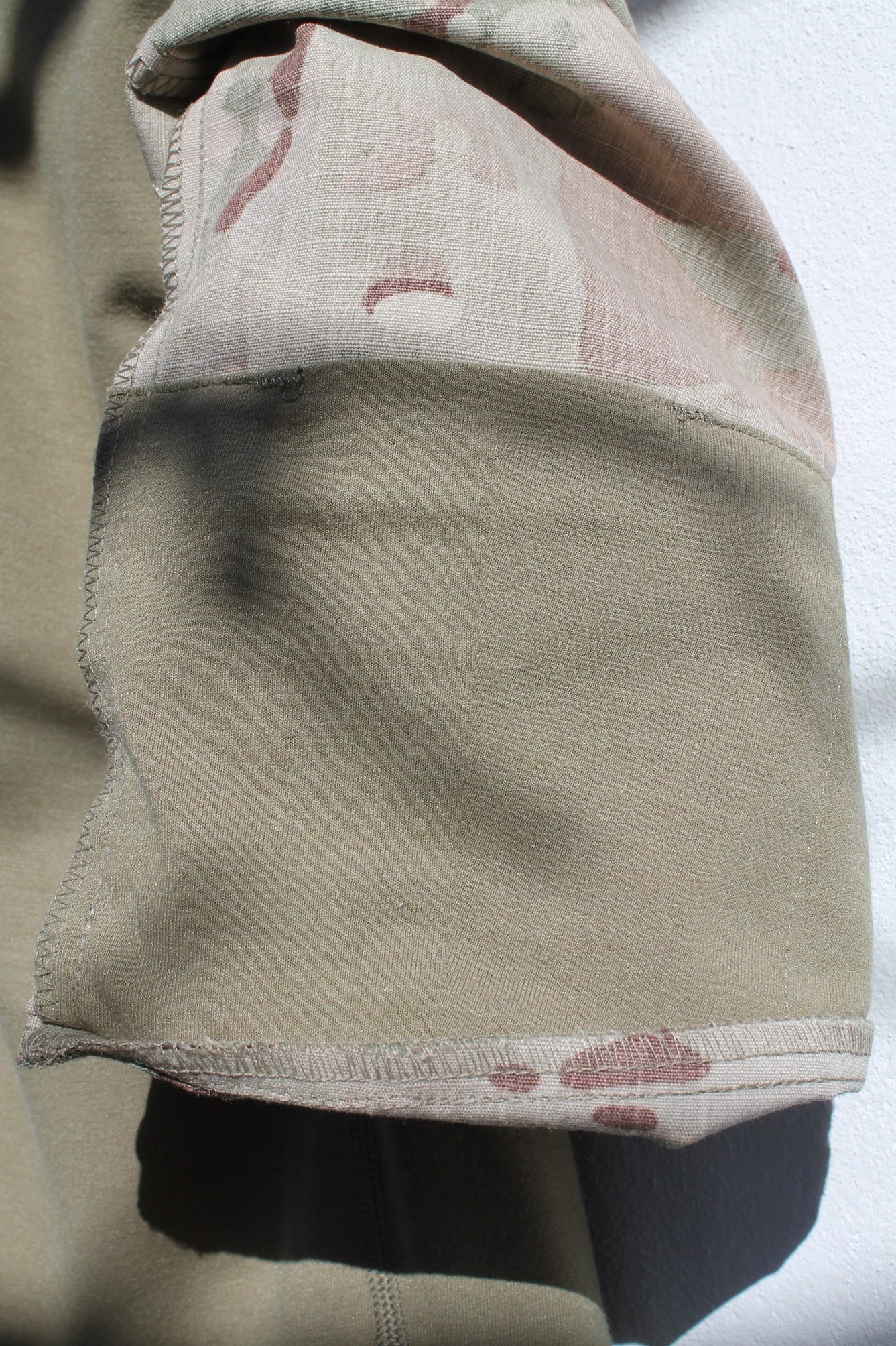 The stitching you see running horizontally about 2/3 the way down the 1st of these images is the same stitching you about 1/3 the way down the 2nd image – these show the exterior and interior of the elbow area and elbow pad pocket.  Somewhat similarly to G2 AC combat shirts, part of the G4 elbow pad is not covered up internally.  Only the larger end of the pad is retained inside this pocket i.e. the part your elbow joint actually sits in.  Having barely ever made use of elbow pads I do not personally know why this particular arrangement was selected. 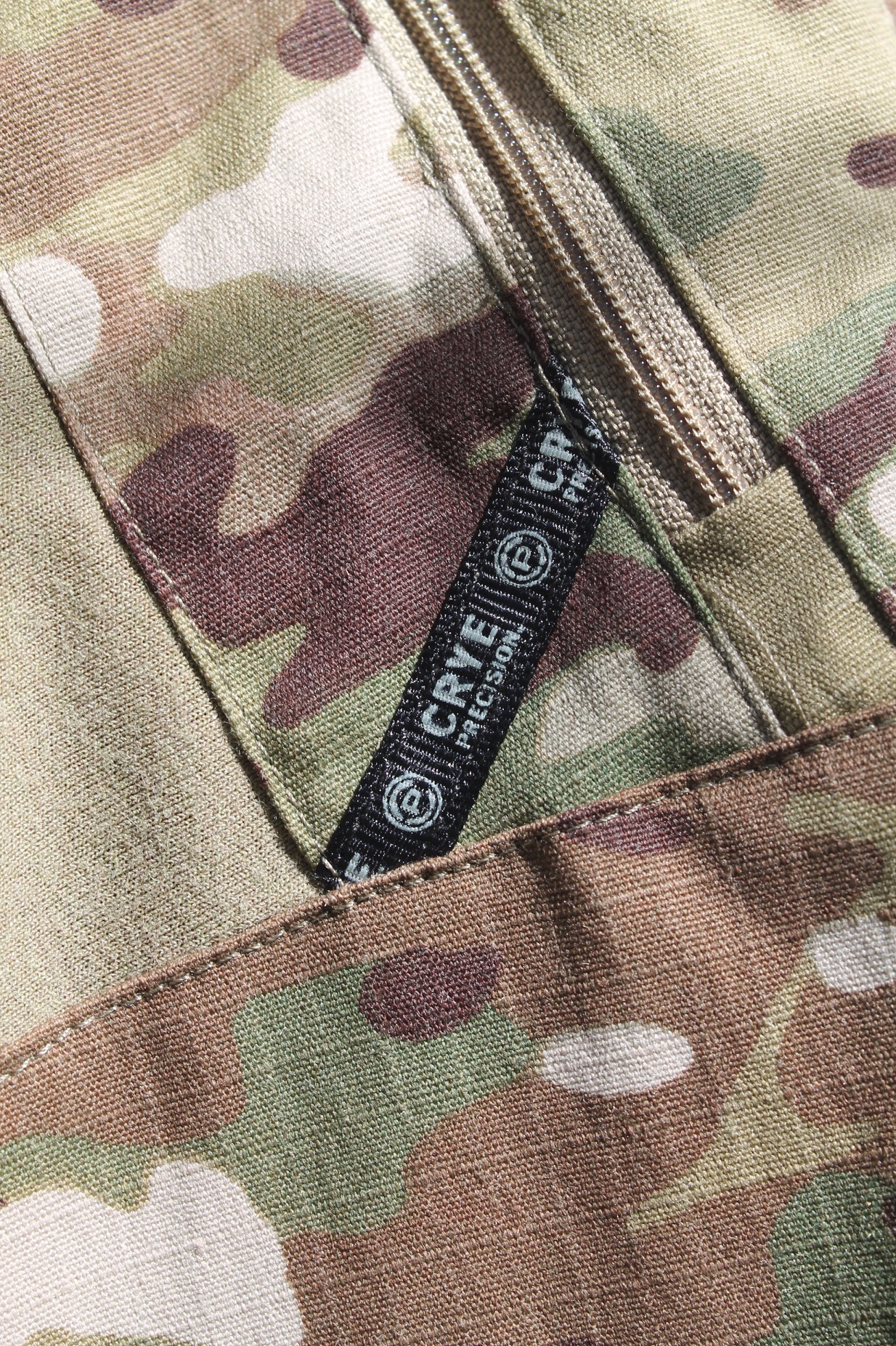 Above is a close-up shot of the iconic branded edging tape that’s been found at a 45 degree angle on every Crye product since the G3s uniforms came out.  Very NY Apparel design, especially being in black and white. 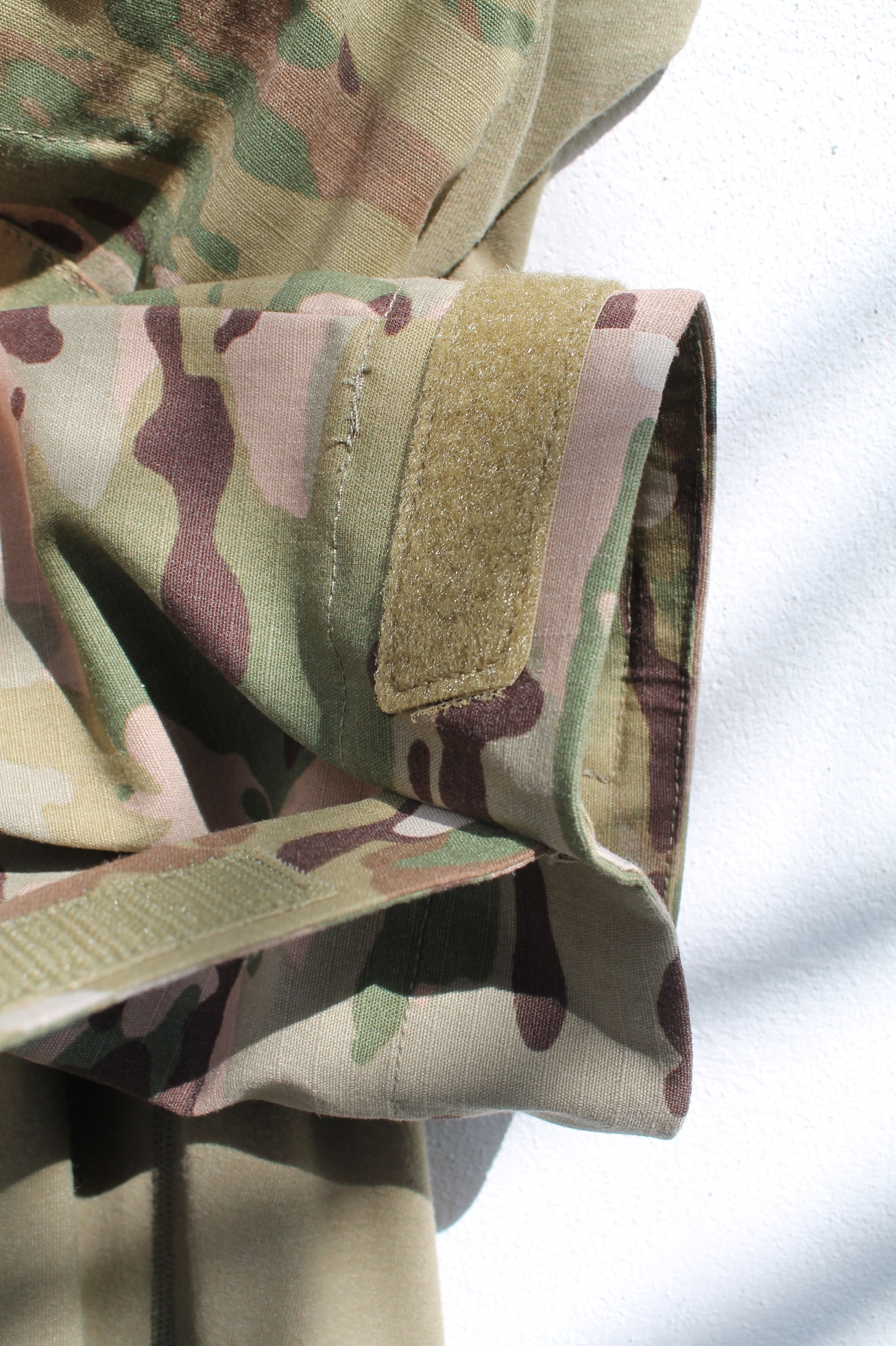 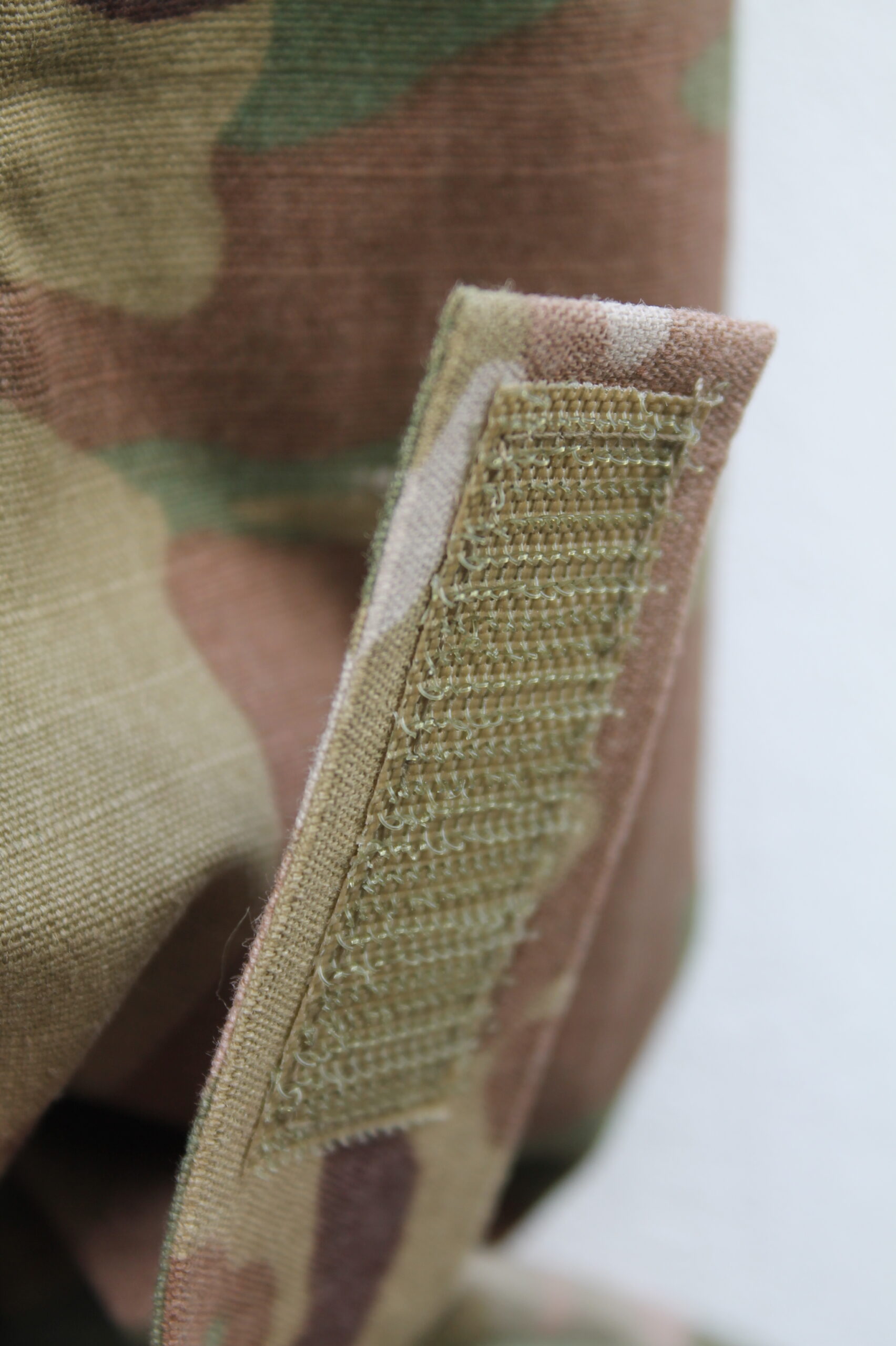 Lastly, the cuff, a standard velcro closure/adjustment, which is the way to go on a standard uniform shirt.  The tab itself is somewhat stiffened and very thin despite being 4 layers thick around the edges, also note there is no stitching visible.  This is due to the use of fabric welding processes when constructing this part of the combat shirt.  The same processes are used in various small areas through the entire G4 product lines of various styles of both Field and Combat uniform.

This is not a review, so I have no conclusion for you.  The primary thing I have to mention s that I’ve read a lot of negative reviews of the VTX fabric in terms of heavy and premature bobbling and wear-through when being used in conventional military training.  Rumors abound of changes in the material through different batches over time and I’ve heard directly from Crye employees about their challenges getting the fabric to hold up appropriately when they change the colour.  At the time of writing I have no confirmed facts about fabric batch changes or differences between US and EU (NSPA) production G4s in this regard.

If you are spending your own money, you might want to just buy G3s.