On one hand, I almost feel bad for getting this for myself and having to use it on a mere airsoft gun.  On the other hand.. you only live once.

I’m not going to tell you exactly what type of aluminium (emphasis on the second i there Americans) this thing is made of, because if you’re going to buy one of these for a real firearm that has serious defensive usage you’ll need to look that up at a retailer and compare it to other options on the market based on what your specific needs are.  Sufficed to say, there is nothing but quality on display here.

I’ll be honest from the start, I’ve got basically zero knowledge when it comes to CNC machine operation or extruding metals, so I can’t comment on those aspects of the manufacture of this freefloat AR-15 handguard.  Hell, it isn’t even that perfect if you were to judge it by a lot of common criteria.  It’s not as light per unit of length as the original BCM KMR or some offerings from the likes of SLR Rifleworks.  It’s not going to be as military-tough as a Knights or Daniel Defens(c)e quad rail.  It’s certainly not nearly as economical as a Midwest Industries M-LOK tube. I mean, hell, I don’t even like the barrel nut or attachment method, it’s pretty damn old school by modern standards and requires more work than should really be necessary to get the rail properly timed. 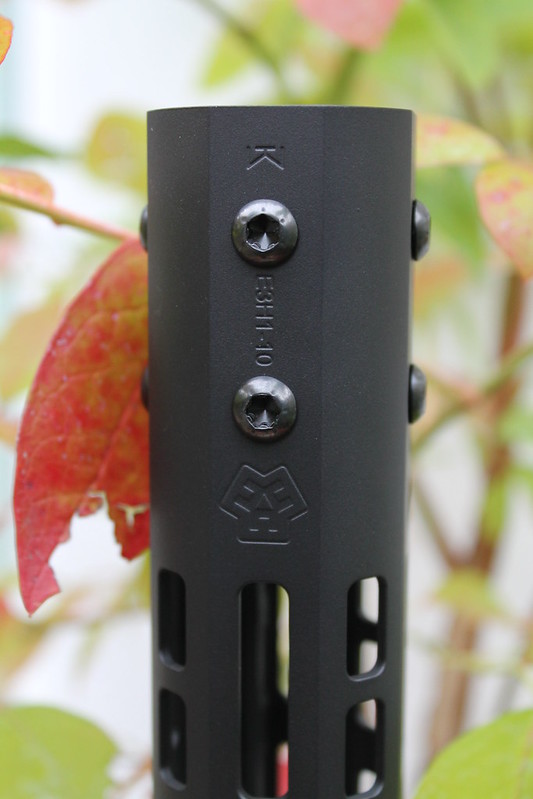 But yes, you’ve guessed it, I’ve been negative at the start because I actually really bloody love this thing; how predictable eh?  I started following EraThr3–pronounced era-three for those understandably unsure–fairly early on in their existence.  They’re a company born from the ideas of a small group of folks who are just unobtainably cool in all the classical senses.  Folks who were already doing very well in high-up positions at other well known AR manufacturing companies.  I had the distinct pleasure of bumping in to a few of them at SHOT earlier this year and was frankly annoyed that not only are they as cool as they are, they’re really bloody nice people to go with it. 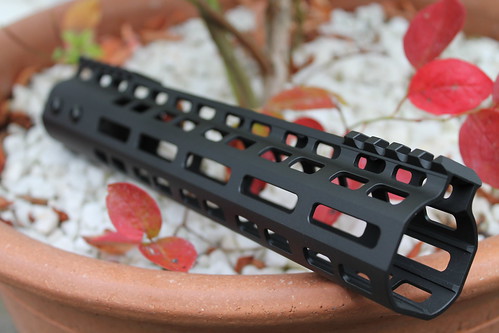 You can see the Noveske legacy in the mounting system employed on this M-LOK rail, as well as the overall cross-section and the bolts used for attachment of the tube to the barrel nut.  Whether Noveske is the OEM for these I’m not sure (it would seem to make sense in a lot of ways) but personally, I’m not too fussed either way.

It would perhaps have been nice if the weight of the included proprietary barrel nut could have been shaved a little, because when you hold this thing it’s got a distinct pendulum tendency to it; the tube itself really is feather-light.  That said, if there’s somewhere you want the weight it’s in the back, as far away from the muzzle as possible.  I also cannot say enough good things about the machine work that’s been done on this forend, every single surface and, more importantly, every edge and corner, is just beautifully transitioned in to a smooth curve.  In a lot of places the edges are so narrow it seems impossible for them to not be sharp, yet they somehow they just aren’t.

The combination of Cerakote on top of anodisation is really quite something to behold.  A deep matte black that’s just somehow a higher quality of black than any other AR accessory I’ve purchased in the past.  Plus, it is of course, perfect throughout and just generally beautiful if I’m being really honest with you.  Most other quality AR handguards are only anodised, because if you get a good anodised finished that’s more than enough to do the job.  But this offering not having that high-sheen finish of raw anodising, or the rather rougher feel of some other coatings, is a very premium-feeling change from the norm.

It’s also my experience that the very best companies in the gun/gear world make their instruction inserts fun, entertaining and informative all at the same time.

I’ve got a fairly rare and high-quality AEG receiver set that’s scheduled to be built from the ground up in to the best CQB replica I can possibly create and that’s where this handguard will end up; that’s the current plan at least.  I’m saddened that I’ve got so many other projects to finish before I get to that point because I really want to get a few choice M-LOK accessories on to this thing and try it out (after taking some more nice photos), but the wait will be worth it.