While the 2nd generation of Crye’s combat apparel was still in production there were a couple of specific variations made for certain military units. In the earlier days some sets were manufactured to the standard Army Custom cut but with AOR1 and 2 fabrics, these sets shared a few, very small features in common with the very first generation uniforms and weren’t made in great numbers. I have a field shirt here that’s an example of that, it didn’t cost me too much fortunately, but if the combat shirts and trousers ever do appear for sale online (which is very rare to begin with) they can go for huge amounts of money.

Those AC sets were of course used by US Army SOF and probably some Navy, but I’m no expert in that area of gear history. What most people do think of when they see AOR patterns of course is SEALs and some other US Navy Special Warfare units. There was definitely a period around 4-6 years ago when everyone and his dog who played airsoft was trying to look like a SEAL on account of all the books and movies coming out, so the prices on any Navy Custom cut items that came up for sale went through the bloody roof. This cut of uniform and the AOR patterns have never been offered commercially of course and technically you have to have a US Government purchase order to buy them. I know that because I asked FirstSpear once out of curiosity of what the rules were. How the DoD ever really expected to control something as simple as clothing I’m not sure and the reality is there’s lots of this NC apparel in the hands of civvies all around the world at this point. AOR1 tends to command a higher value than 2, the combat pants being the most clamoured for item, followed by the combat cut shirt then the field cut sets. There are also a few NC sets multicam out there, but they seem far less common than the AOR patterned items.

It was about 2 years ago before I first went to Las Vegas that I decided I fancied having some AOR in the collection. Not because I’ve ever been in to the impression or re-enactment scene it’s just a really cool looking pattern that always comes from quality manufacturers who put out good, modern kit and that fits what I like to buy. The handy thing about physically being in the US where most of the auctions are located is you can actually be online for the end of said auctions. I like collecting gear but I’m never getting up at 3-4am GMT on a Tuesday just to avoid someone upping the bid I placed a few hours earlier by 1 dollar. I specifically remember being sat on a chilly, deserted monorail station platform one night after I’d been up to the Stratosphere for some dinner, hunched over my phone waiting for the next train while watching the last few seconds tick down on this particular combat shirt. Fortunately in 2016 the prices had dropped massively compared to 2011-12 and the auction in question hadn’t seemed to attract a lot of bidders that week, so I only had to pay a couple of notes more than a commercial Crye shirt would’ve been. Not too bad all things considered, worth it in the long term.

This sort of tale might not interest a lot of folks, but I want to say that it’s not so much just a load of money that’s needed if you want to have cool items in your collection to post about and discuss. There’s no effort or challenge involved in simply throwing a ton of cash at the first thing that comes up and being wasteful, no rewarding sense of hunting down a good deal either and I’d imagine everyone loves doing that, I know I do. Not to mention of course that if you over spend on one thing that’s money out of the budget to get other things. Personally I have an awful lot of forums and facebook groups and preset searches bookmarked in Chrome that I’m checking with great frequency, so as to minimise the chances of missing any good bargains that crop up. Unfortunately I am classic 32R/MedR and medium in almost everything in general, which means there’s a lot more competition as it were, whereas if you fit XS-long or XL-Xshort you’ll have zero trouble getting things at good prices. But honestly hunting down the things I like is as much of a hobby now as taking the photographs and then writing about them or taking them out to airsoft games (or occasionally to work with some gear).

So apart from the fact you need to be a member of an elite unit in the USN to ever have be issued these NC AOR items, what’s the difference between them and the AC cut that was commercially available for a good number of years? Not a whole lot in the grand scheme of things. The sleeves, yoke and collar are the usual 50/50 NYCO of course, the usual YKK coil zip, same velcro cuffs as an AC, same height of collar, pockets mostly the same too. The label would imply the torso fabric is different to that found on an AC shirt, but I don’t believe it to be correct. Initially the NC line was manufactured with an all synthetic/polyester torso, which means very fast drying but as you’ll have seen from the videos in my last post – terrible FR performance. The change over to the torso fabric was made quite early on, so if you see an NC shirt with a shiny, sports jersey/gym shirt type torso it’s an old piece and much less common. Everything about the look and feel of this particular Navy cut combat shirt suggests the torso is actually 96% cotton and 4% lycra, as per all commercial AC combat shirts. My guess would be that they printed thousands of the green labels at the start for the sake of efficiency and continued using them even when they became incorrect. 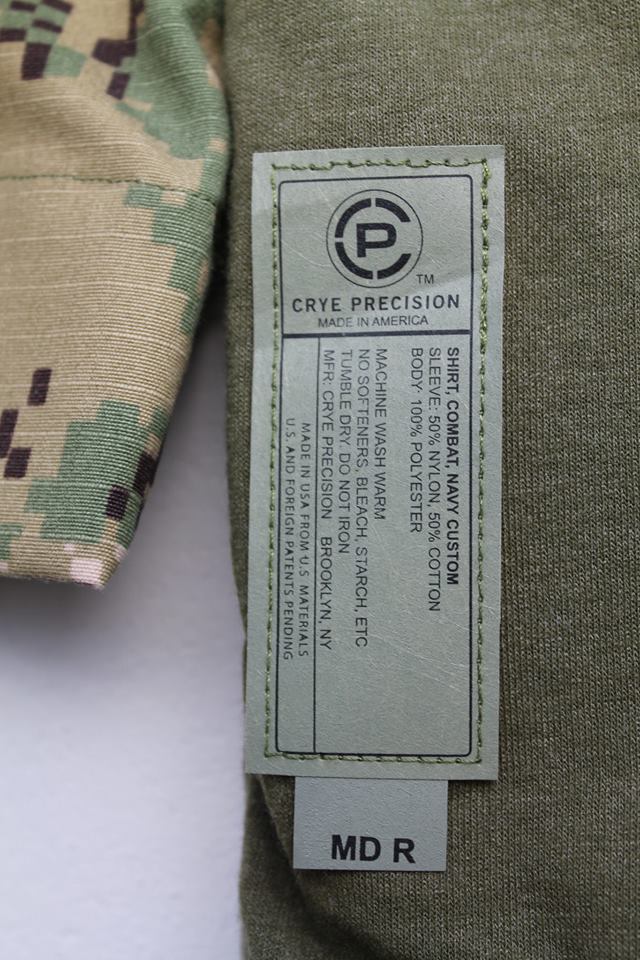 One key difference that plays in to the word Navy is the closures on the upper arm pockets. Where an AC shirt uses hook and loop, here you’ll see buttons as the primary method of securing the pocket flap. Much like the fingerprint ID on your phone, velcro is very unreliable when it’s fully sodden and water logged. The other key change is in the elbow pad pocket. Whereas the AC elbow pad is not actually contained inside a pocket of fabric and straps directly to the wearer’s arm, the NC shirt fully encloses the pad. You’ll note the pocket looks more than a bit like the one found on a G3 combat shirt, so presumably Crye found the setup to work better and carried the feature over from the NC to all G3s that we see today. They certainly didn’t copy the elbow pocket from the G2/AC field shirt as that is a different shape with top loading for the pad rather than the opening being down near the wrist. 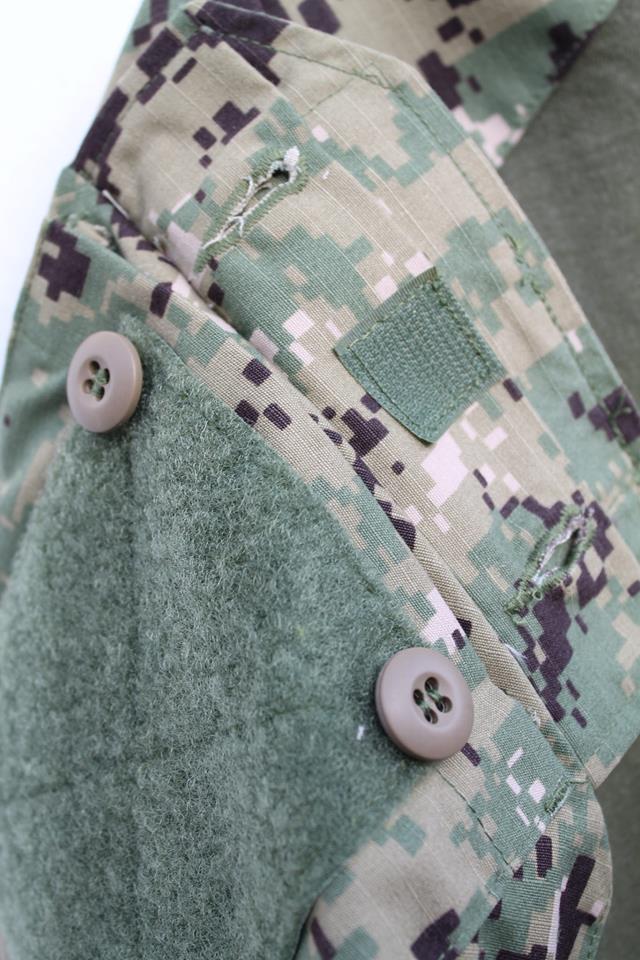 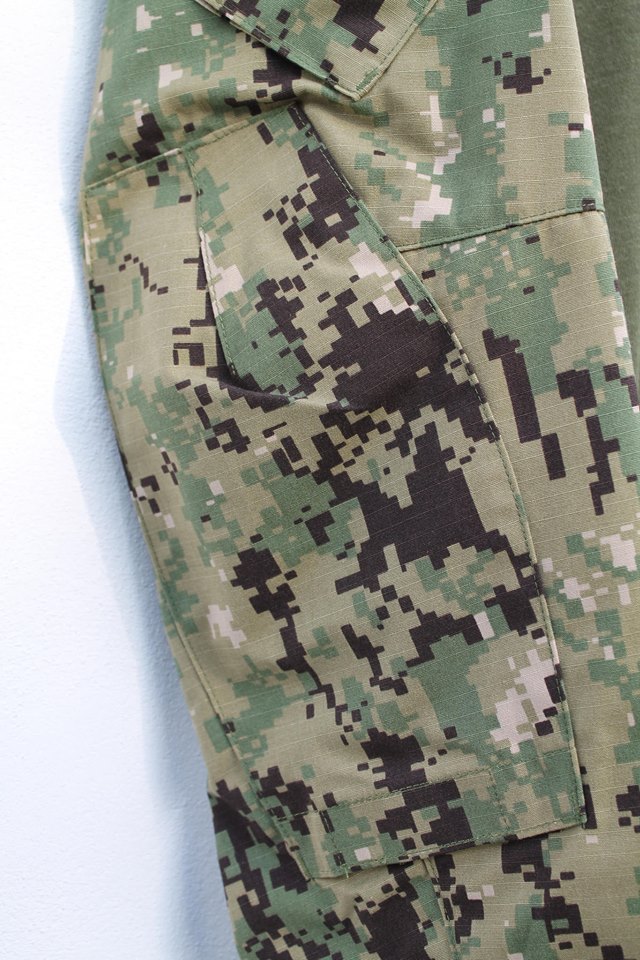 Between the NC and AC combat trousers I only know of the differences in pocket closures, buttons vs pure velcro. But if I ever find a pair in AOR2, in my size and good condition for a good price, I’ll likely be tempted to pick them up and talk about them. Odds are slim of those planets aligning though.

NSW moved on from the NC some years ago of course as Crye discontinued manufacture of the 2nd gen uniforms, so Patagonia L9 sets and G3s (Crye and Drifire) in the AOR patterns were issued. Whether they still frequently use AOR1 and 2 I don’t know exactly because I don’t keep up to date on that stuff, but they’ve certainly worn them for long enough now that substantial amounts have leaked their way out of the Navy.